Whenever you mention Leeds or even just delicious sandwiches, there is always a pretty good chance Bailey will bring up Slip's Deli - a little eatery in Headingly just up the road from where he used to live, famed for bringing its tasty sub-sandwiches to the people of Leeds. 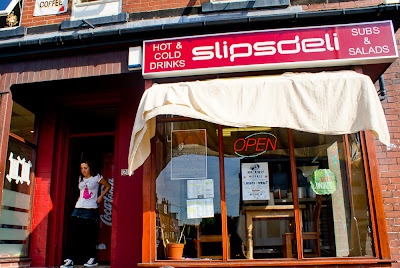 Yesterday we were in Leeds following a big night out in which some fairly drunken table-dancing had occurred. We had spent the morning razzing around the city centre near our hotel and hadn't found anywhere suitable to eat so Bailey said he would drive us over to Headingly so I could sample the delights of Slip's on our way to Tropical World. 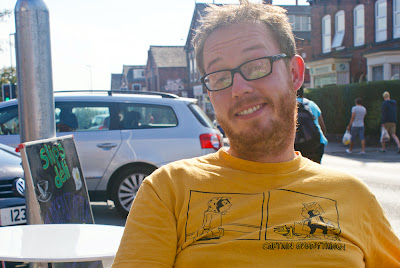 It was a beautiful hot day so as soon as we arrived, we selected a table outside in the sunshine which was lovely despite being by a road. 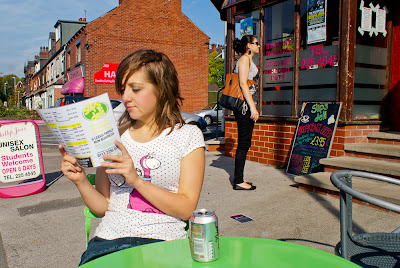 Inside, Slip's wasn't really what I had expected from Bailey's description - I imagined a cute and fancy deli, but Slip's is much more no-nonsense than that and I could see why Bailey liked it as it is very boy-friendly and is definitely not style over substance. 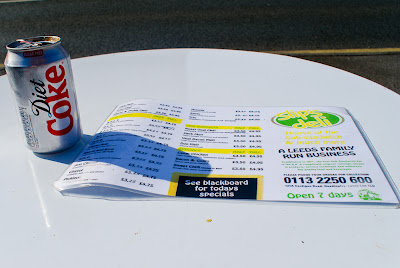 The menu looked amazing with plenty of veggie options and my mind was boggling as I tried to decide what to order - I was in one of those weird hangover moods where you can't decide which food is going to hit the spot. 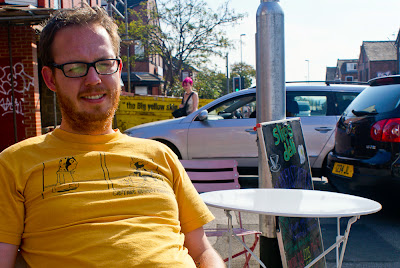 Bailey announced that he would be having the Chiba Submelt of chicken, bacon and mushroom with mozzarella instead of blue cheese. He also assured me he would be going for a full size sub. I decided to follow suit with a full size Vegi-Bacon Submelt on a granary sub. 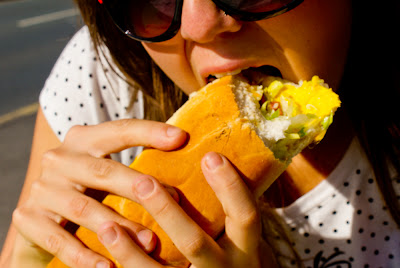 The staff were super friendly when they took our order and it was nice to see them all not taking themselves too seriously. I wouldn't say they were the most efficient of deli staff in the world, seeing as one of the guys had to come and see us to say he couldn't read the writing of the person who'd written the check (this was actually good as it meant he could offer me a mix of mozzarella and cheddar which I excitedly accepted), and when our subs were ready, another lady told us to look inside the sub before biting in just in case she'd put them in the wrong bag, but you didn't really mind as it was all done in such good humour. 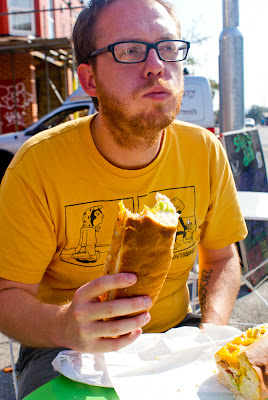 Once the sub-sarnies arrived, which took a little while but we didn't mind as we were basking in the sun, I literally could not believe my eyes. They were HUGE! I was almost a little miffed at Bailey for not warning me just how massive they were going to be. My Veggie-Bacon Submelt was literally almost as big as the table. 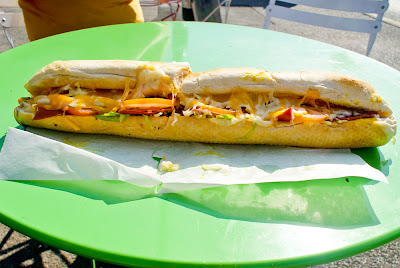 Scratching my head about how exactly I was going to fit all of this mammoth sanger in my gob, I took my first bite and... ohhhh it was amazing!! 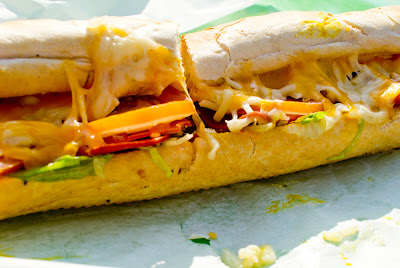 Deliciously toasted fresh bread, crispy salad, tasty mustard, a lovely melty mixture of cheddar and mozzarella and surprisinly lovely veggie bacon.
The only problem... where was my granary bread? I was a bit annoyed about that seeing as when I am eating a sandwich longer than my arm I do like to at least pretend I am being at least a bit healthy. I decided I wasn't going to say anything though as it had taken quite a while to come out in the first place and I was starvin' marvin. 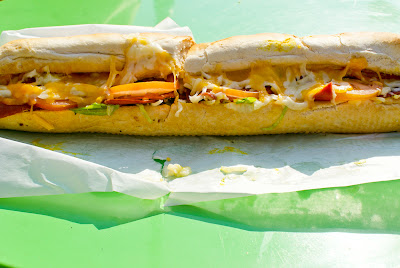 Anyway despite the lack of granary, I absolutely loved it. Every darned bite was delicious with a good range of flavours and textures and it was gorgeous and filling. Really sorted my hangover out. 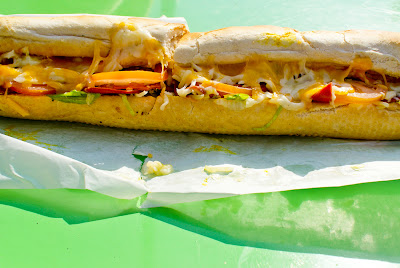 Bailey's Chiba Sub-melt arrived looking equally mammoth and delicious. Although he always gets the Chiba when he goes to Slip's and he has been known to get it with blue cheese, it was as great as usual. The chicken and bacon is a winning combo with excellent bread, and they always put on plenty of condiments. 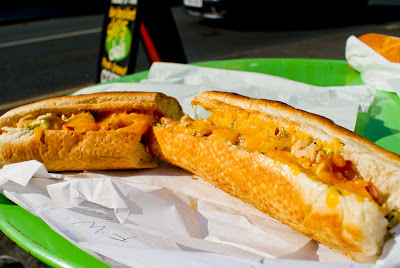 There was a bit of an issue with Bailey's too though. How come, even though I hadn't even ordered mozzarella I got a lovely cheddar and mozzarella mix in there with mine, while Bailey who did order it only ended up with cheddar? 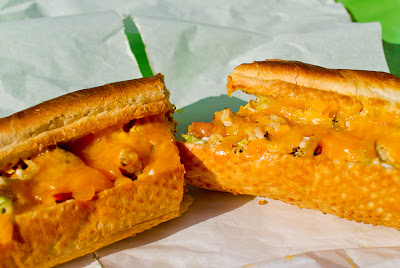 We really, really enjoyed our trip to Slip's Deli. Although we ended up deciding to take our sarnies to finish in the car due to a rouge wasp who wouldn't leave us alone, it was an excellent dining experience. The subs really were worth all the hype and they really restored my faith in sandwiches. I would definitely say that if you are on a diet or are buying the full size sub to save some for later, beware. I totally intended to save some of mine, or at least stop when I started to feel uncomfortably full (which was only about halfway into the sandwich) but because it was just so delicious it was pretty much impossible to stop until I had eaten the whole thing and couldn't have crammed another morsel into my mouth. I suppose I haven't actually eaten anything since and it's been a good 18 hours so it sure filled me up! 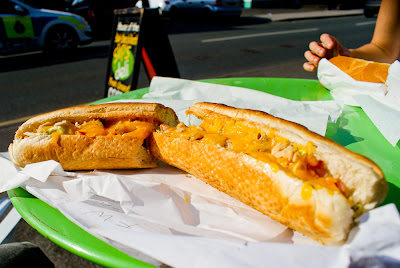 We would definitely recommend Slip's Deli to anyone passing through Leeds who loves a good sandwich. I was feeling a bit negative about sandwiches in general at the time, and now I simply cannot stop thinking about sandwiches so it must be good. Although the staff were a bit jokerish, they were so nice and funny that you didn't really mind. We will definitely be returning to Slip's and I can't wait to try some more of the ace stuff on their menu, in fact I might even enter their competition to design a sub of my own and end up on their wall of fame. Very nice Slip's, thanks!

Posted by Jules at 8:39 AM
Email ThisBlogThis!Share to TwitterShare to FacebookShare to Pinterest