There's been an awful lot of talk about street food lately. And it's fair to say Manchester has been getting a bit of a kicking for being "lightyears" behind the likes of London and Bristol. While I'd be on the front lines supporting anyone who wanted to start any sort of street food revolutions around here, for now it would be counterproductive for me to sit here crying into my veggie lasagna about the fact that we'll never have it as good as Portland Oregon and that our events can't compare to London's Kerb or Street Feast... Instead I'd like to talk to you about a city we visited recently that proves that Manchester is fully capable of  having a street food scene that does not compromise on quality, originality or atmosphere... Let's talk about Leeds. 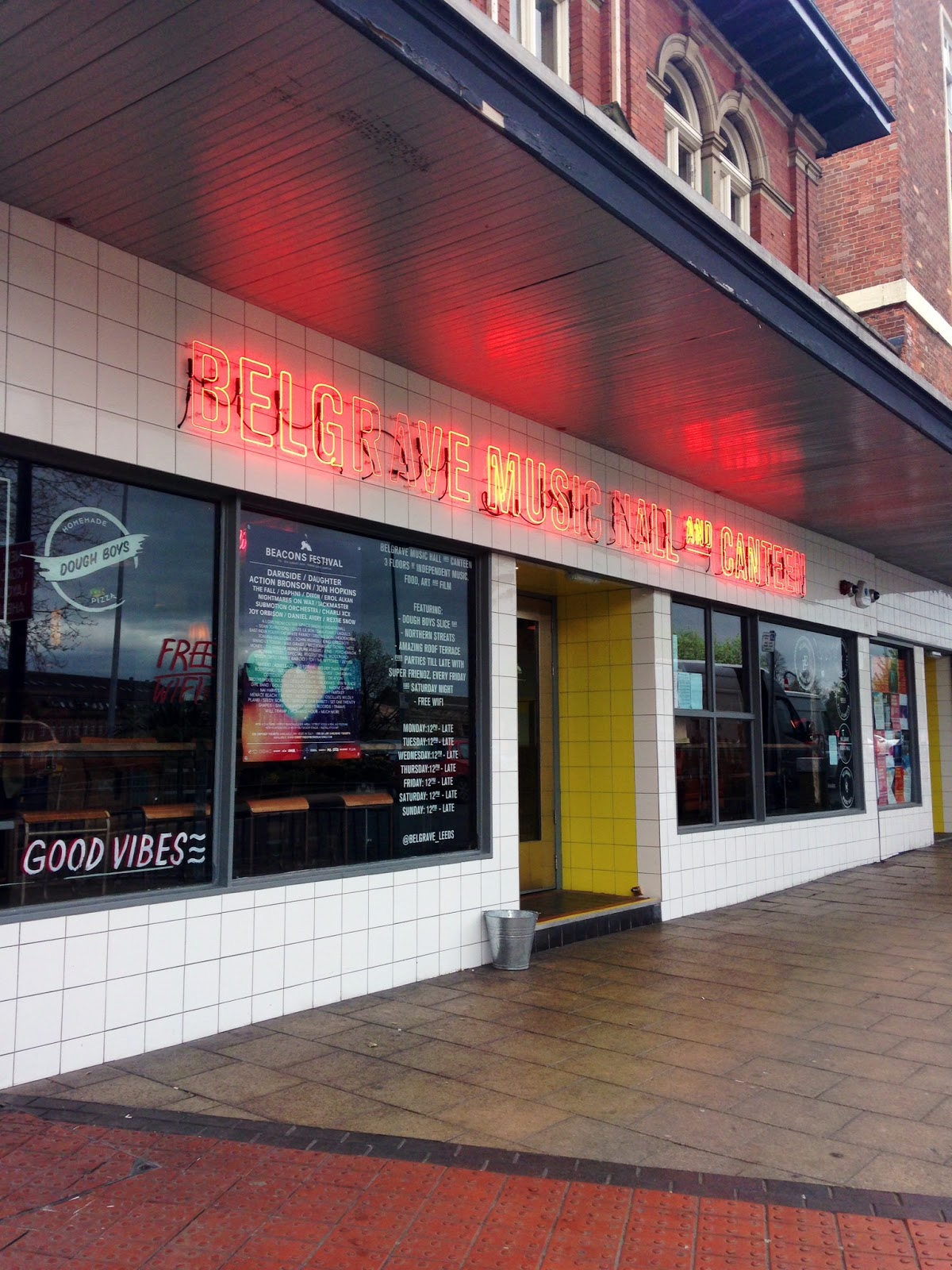 A while back we were trading at Belgrave Music Hall's monthly Street Feast. This event had everything I personally would hope for out of a street food event. The atmosphere was spot on but this was down to so much more than the fact the place was packed to the rafters (ALL day!). This wasn't just about "hipsters", this was about food lovers of all ages, families, dogs, good times... The feeling of friendliness and inclusiveness was palpable in the air. 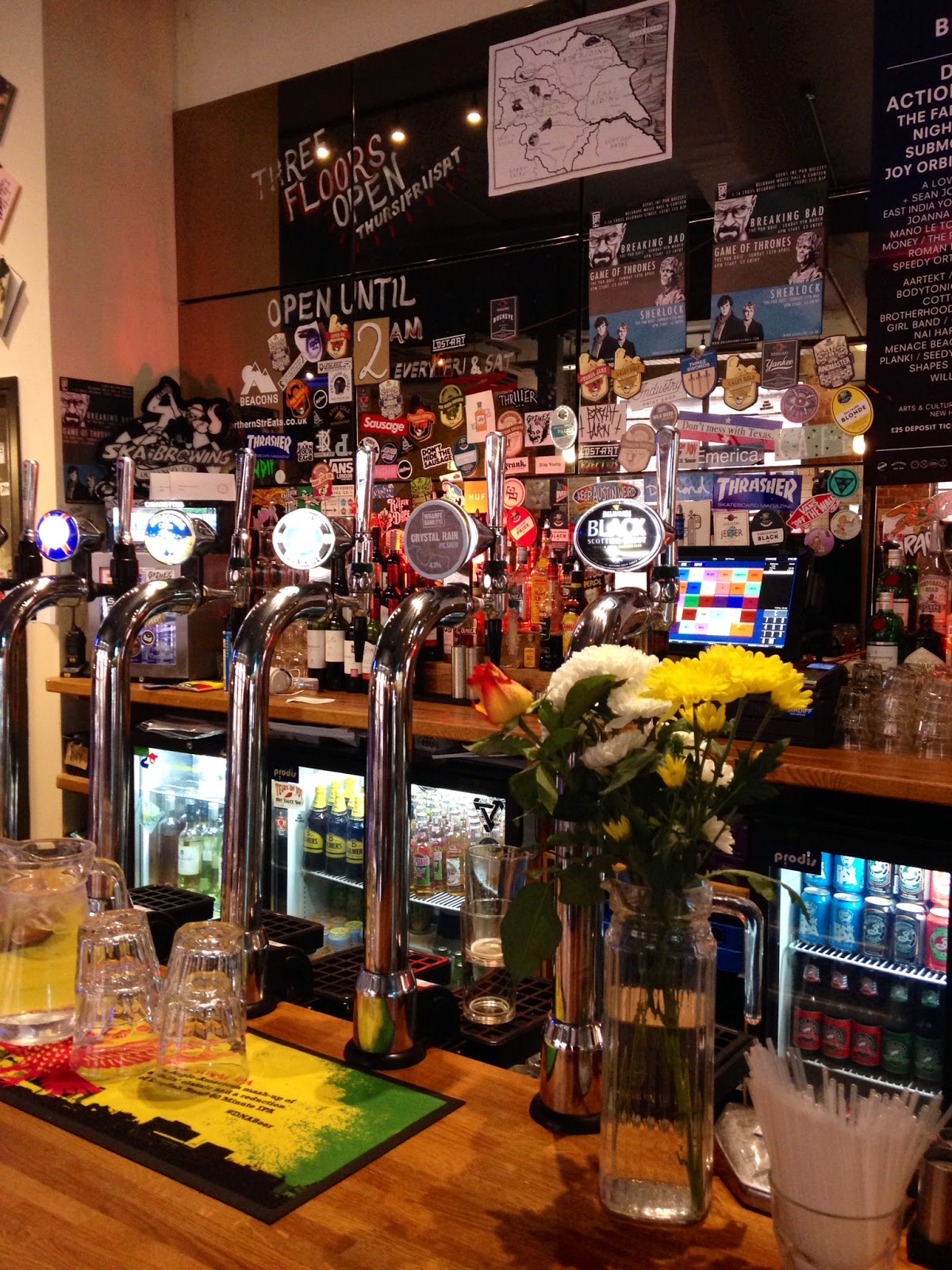 I'll tell you what else this event wasn't about - "cashing in" on a trend. Everything was what I'd consider to be reasonably priced from both the venue itself's bar and the traders (and let's not forget this is only possible when traders haven't been charged an extortionate pitch fee). 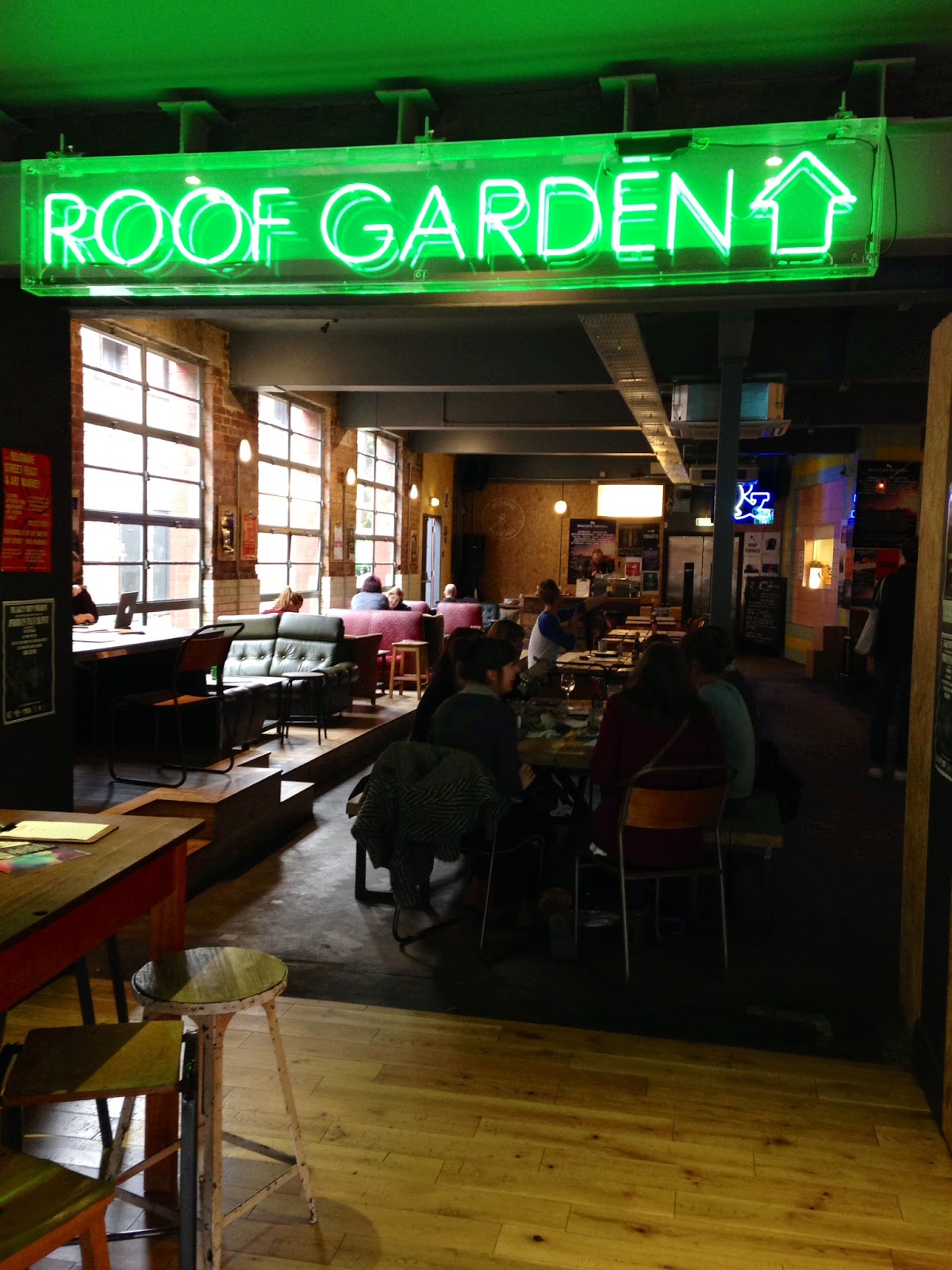 Belgrave is also an amazing city centre venue - a converted Riley's pool hall filled with odd-shaped rooms boasting a sun-terrace and more personality than you can shake a stick at. Oh and here's a video about Street Feast where you can see Bailey at 1 minute 44 talking about how great the event is...


It's plain to see that the focus for Belgrave has been creating a high-quality event that works for them but is great for the punter, great for the trader, supports the "little guy", offers unique products, supports the local food scene and is sustainable in the long term. This is the kind of event that warms my cockles and that, if I lived in Leeds I would be coming back and supporting month in, month out. 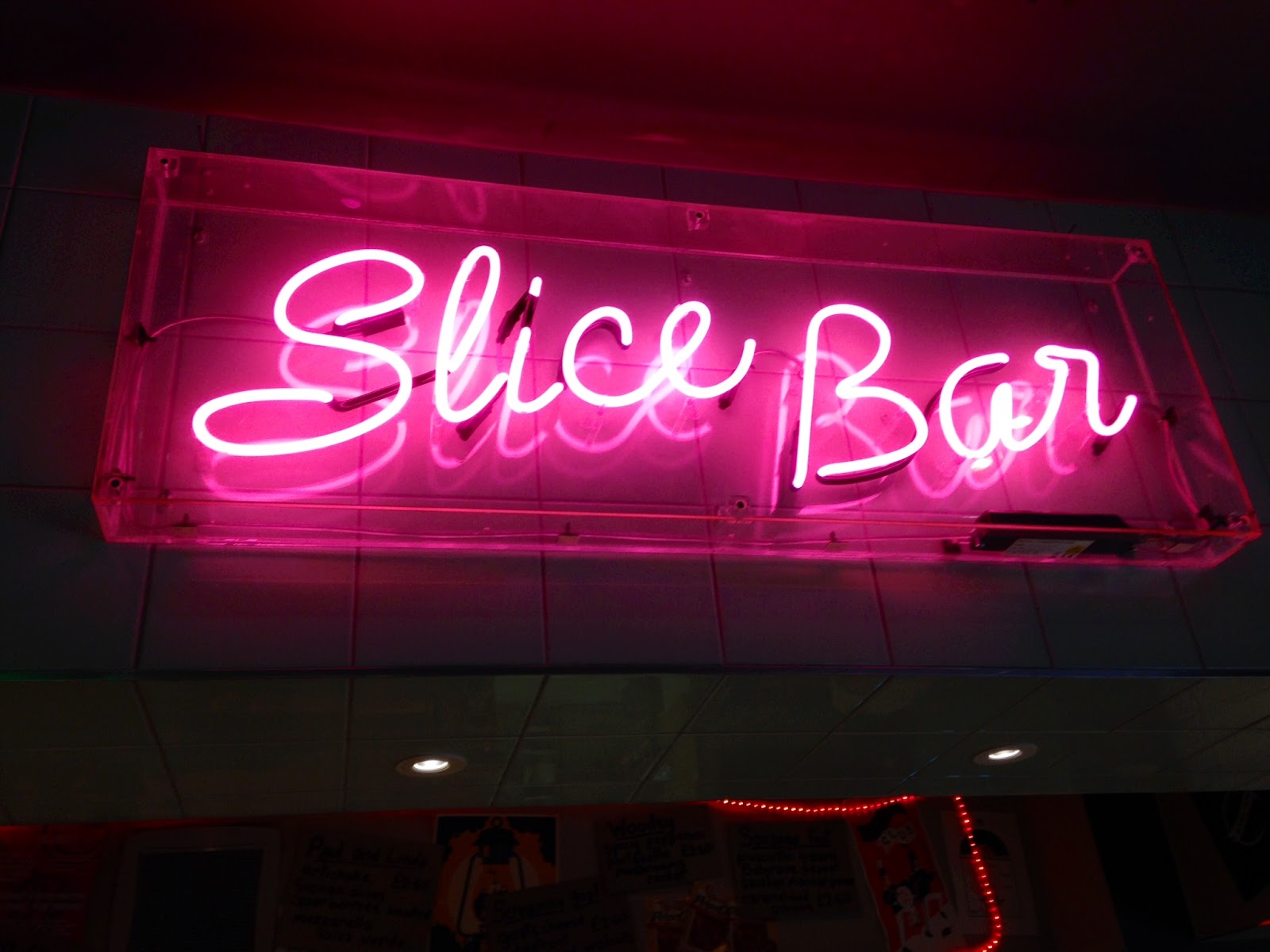 The only disadvantage of trading at such a successful event is that you barely get time to get out from behind your grill and try a single scrap of food from any of the other traders, so Bailey and I decided to jump on a train a few days later and see what we'd missed out on. 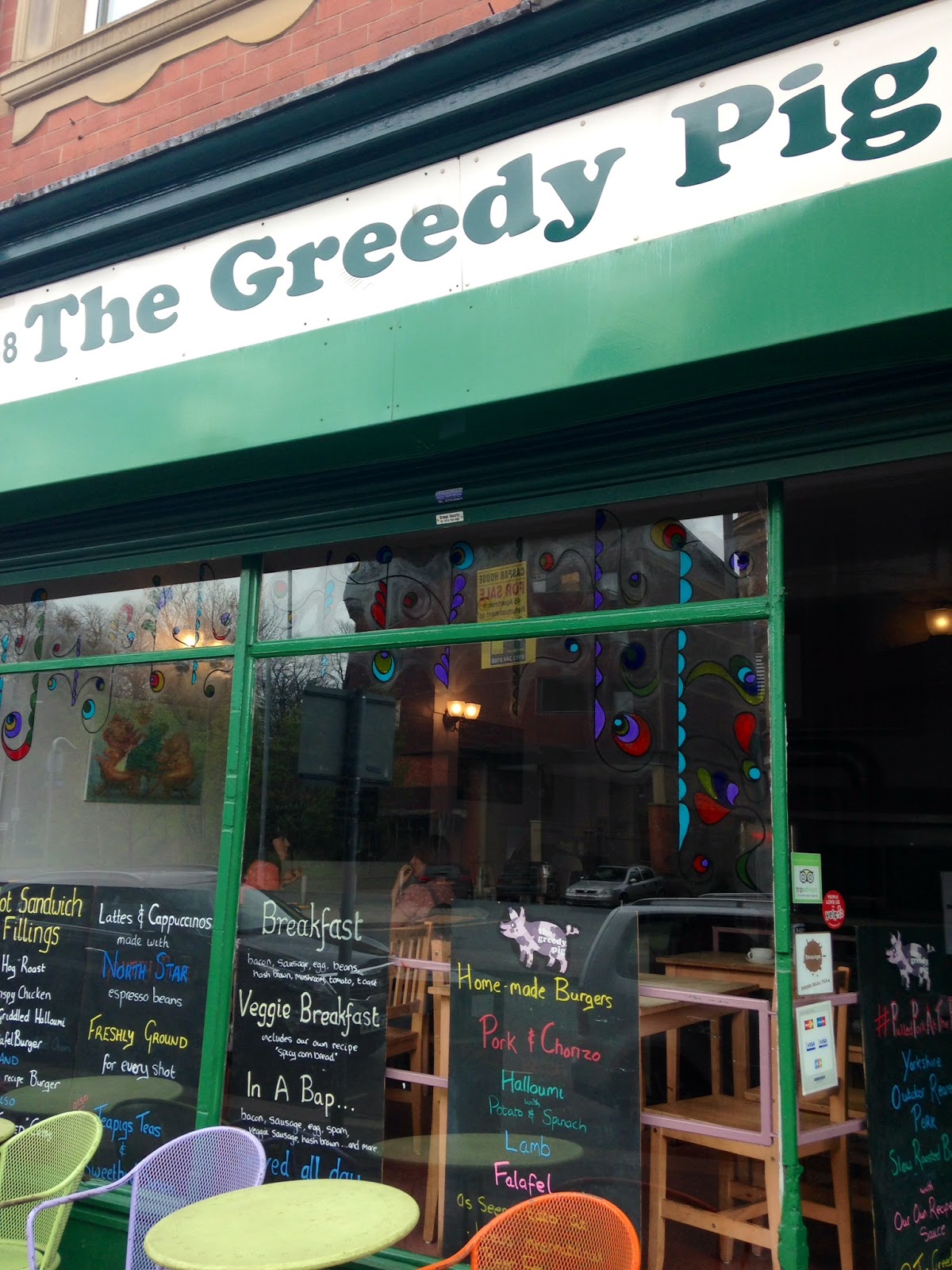 We were reliably informed by the local bloggers that the best breakfast in Leeds can be found at the unassuming yet hugely charming Greedy Pig. While we didn't get to see them in full street food action cooking up their nose-to-tail delights, they certainly know how to put together a great full English and veggie sausage sanger on brioche bun. 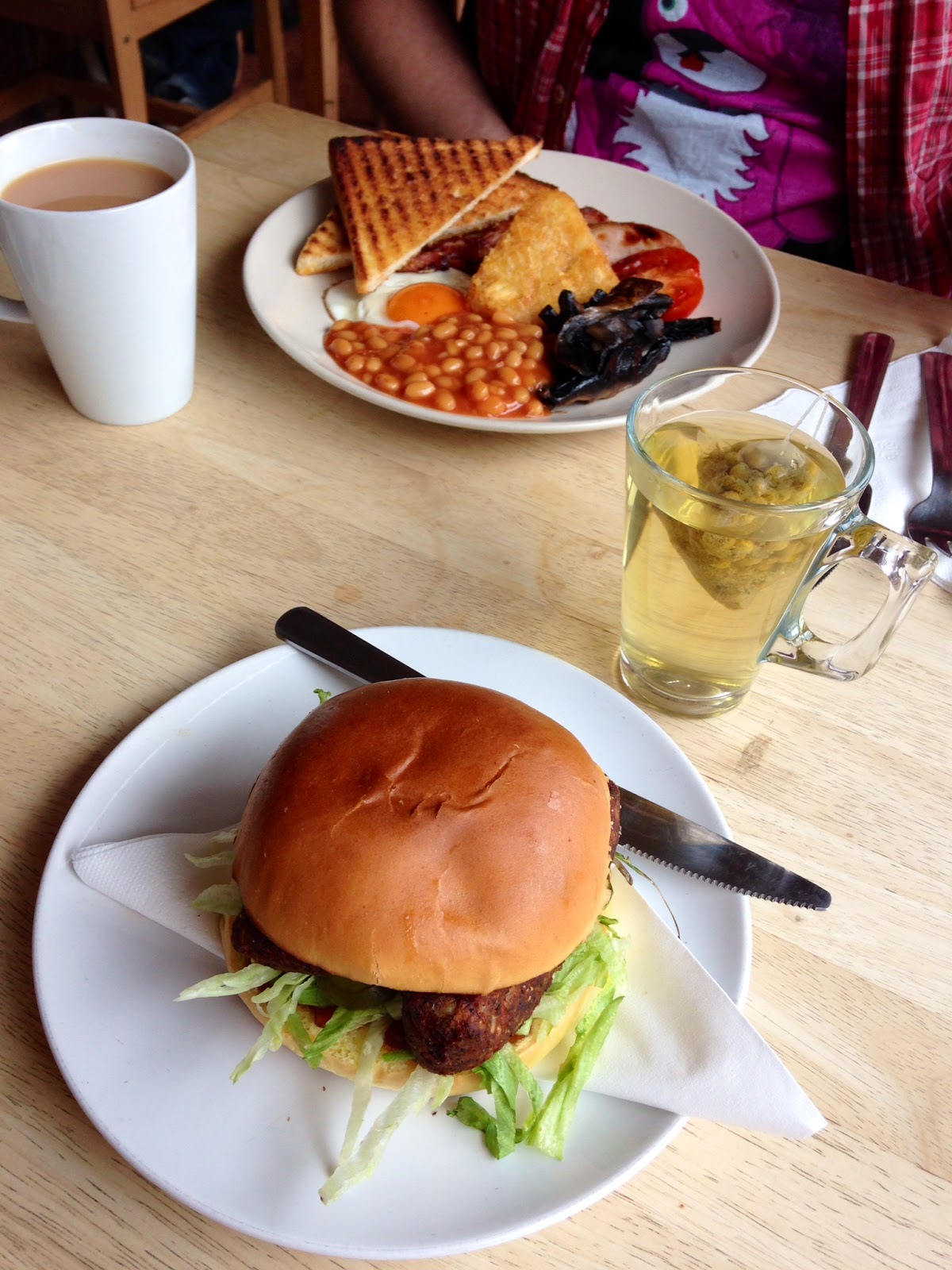 Next up we hit the place where all the magic happens, Belgrave itself. Although it obviously had a totally different 'vibe' when not full to the brim with street food fans, it was still a great place to sit and eat a snack or two (or three). Patty Smith's made Bailey one of the best burgers he'd had in yonks - simple, tasty and not over-topped. When I asked him for his one-sentence review, the first word he used was "squidgy" and he SWEARS he hadn't read Marina O'Loughlin using the exact same word to describe them just yesterday, so now we can now declare it scientifically proven that Patty Smith Burgers are squidgy... 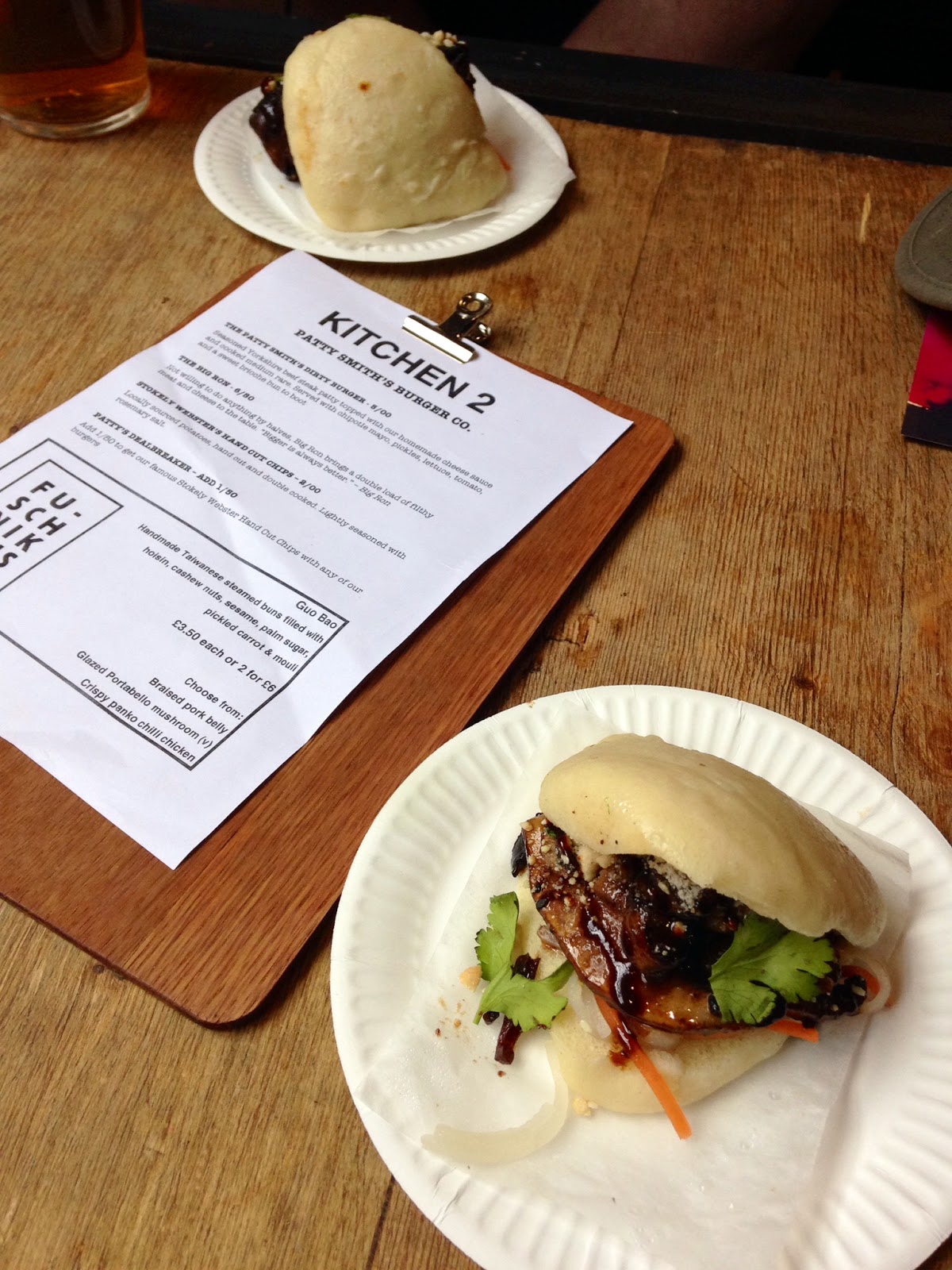 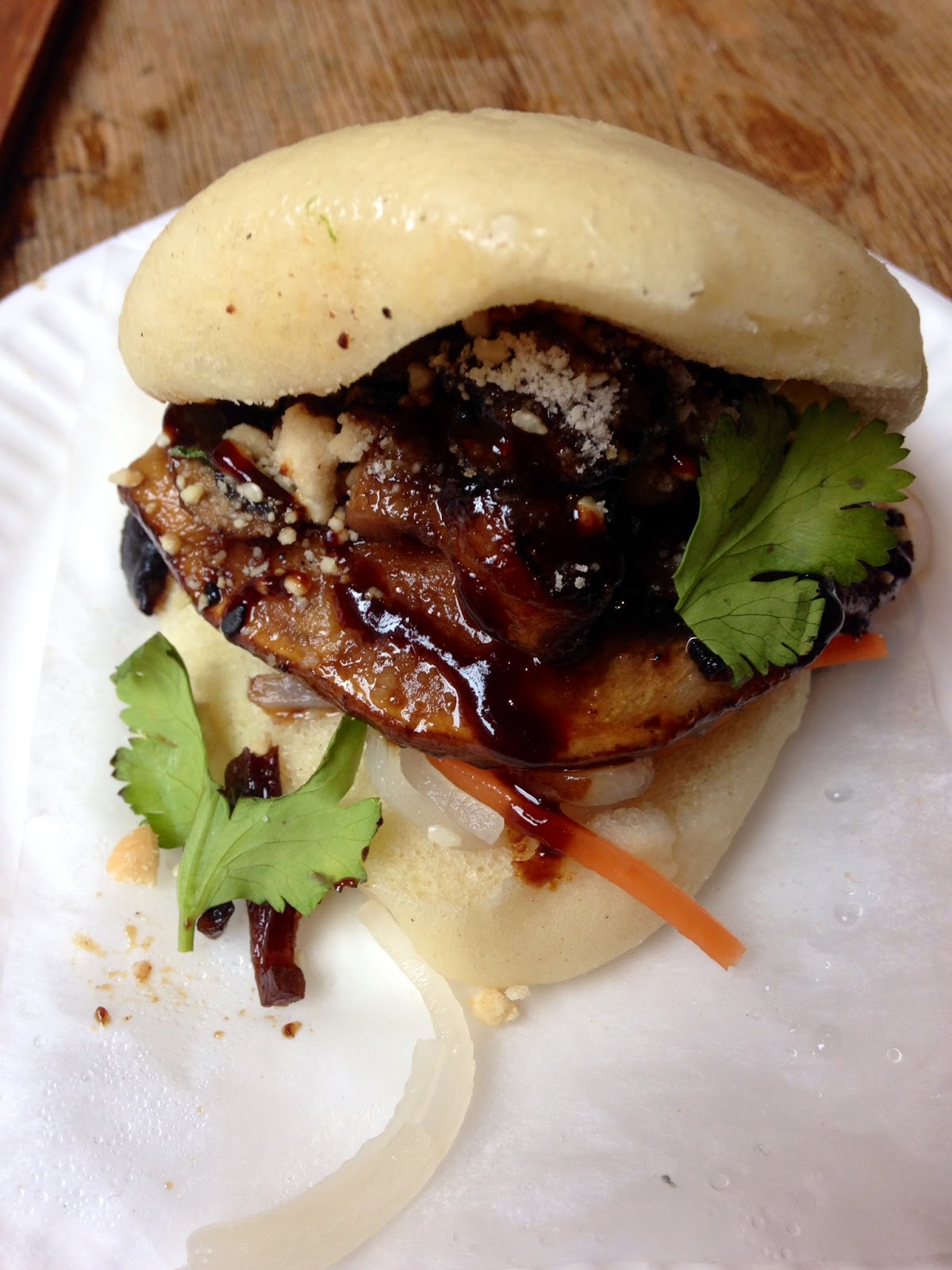 Fu Shnikens' steamed Taiwanese gua bao buns were one of my favourite street food dishes of all time and Bailey could barely believe his luck at being asked to pay a mere pound (his cries of "A FUCKING POUND!" could be heard all around Leeds city centre) for a generously topped, tasty slice from Dough Boys. 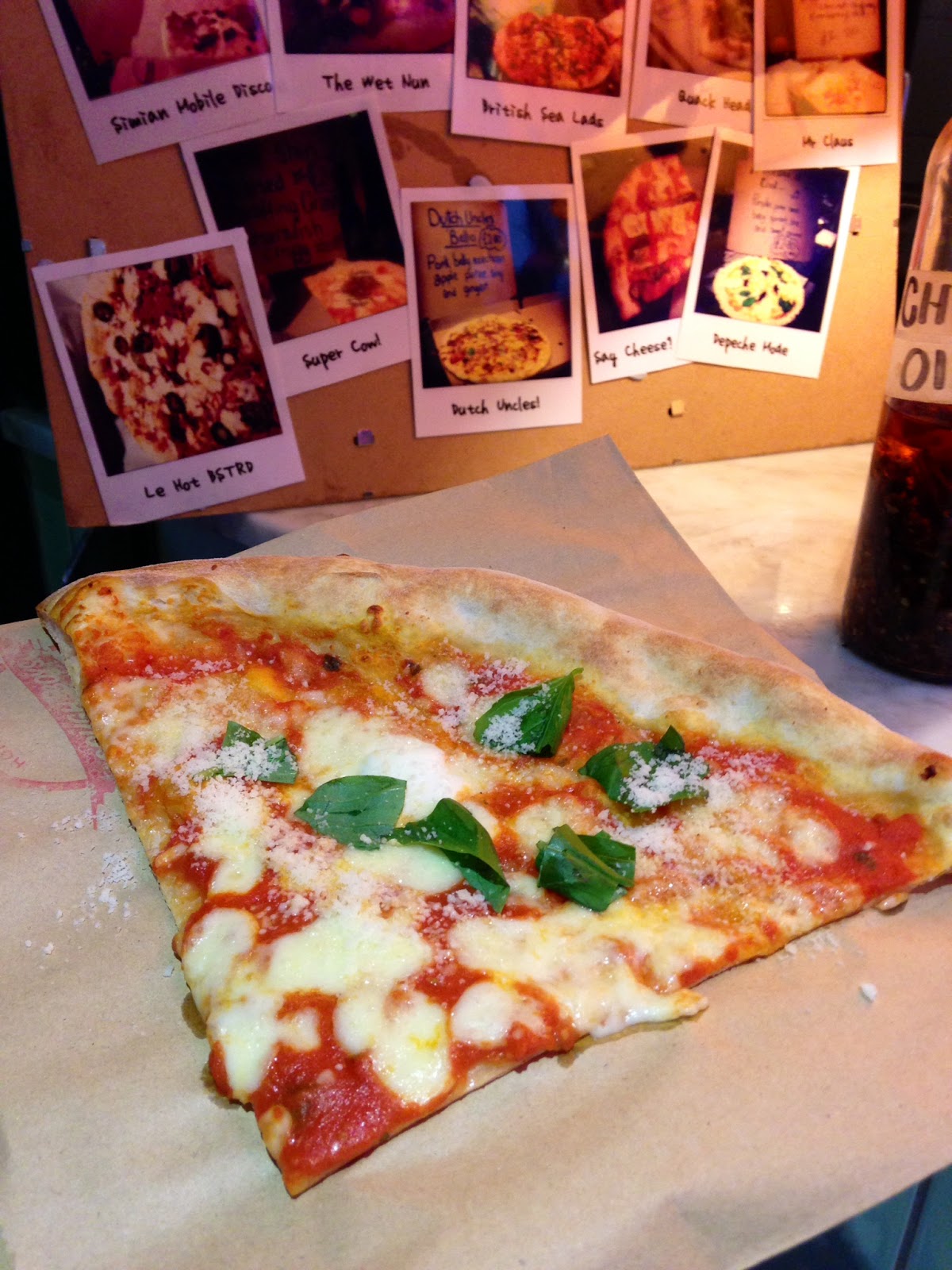 Our final pitt stop was the well-known Trinity Kitchen which I guess is something like what you'd get if someone spent shitloads of money making the Arndale Food Market uber trendy and putting in a champagne bar. Like at the Arndale there's an eclectic mix of permanent eateries but we were there to see the guest traders - shipped in especially from up and down the UK to ensure Leeds gets access to an ever-changing selection of high quality street food. Another complaint we hear a lot here in Manchester is that you always see the same traders at events, therefore this Trinity setup seems very clever to me and the people of Leeds are clearly on board with it as the place was packed on a weekday lunchtime. 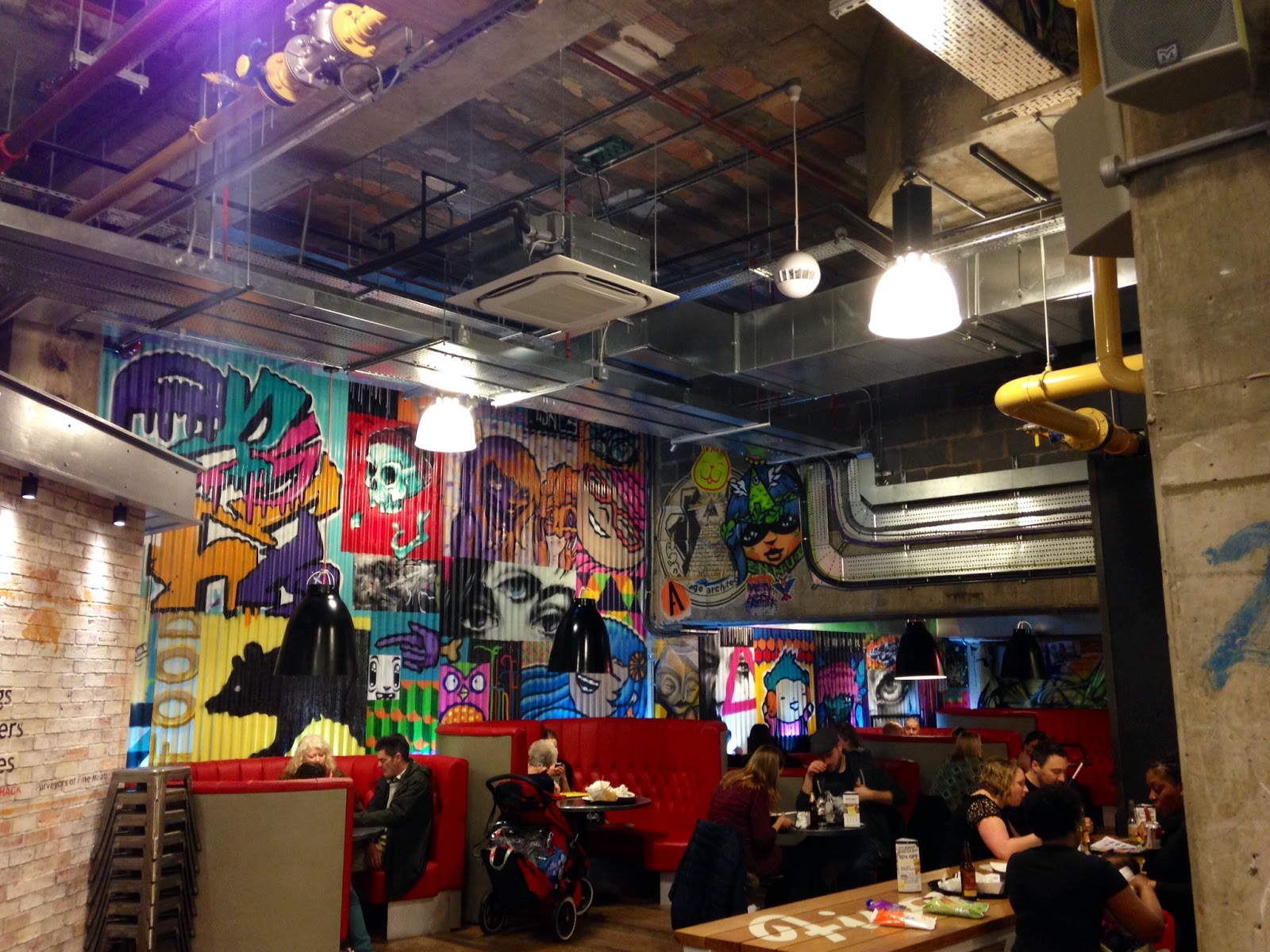 We sampled an unexpectedly spicy Tava Roll from Rola Wala and a huge portion of very tasty sushi from Happy Maki (both trade in THAT LONDON, both doing well here up north). We wanted to carry on eating as there were several other things we wanted to try, but we were unhappily reaching that 'beyond uncomfortably full' stage and therefore returned to Manchester. 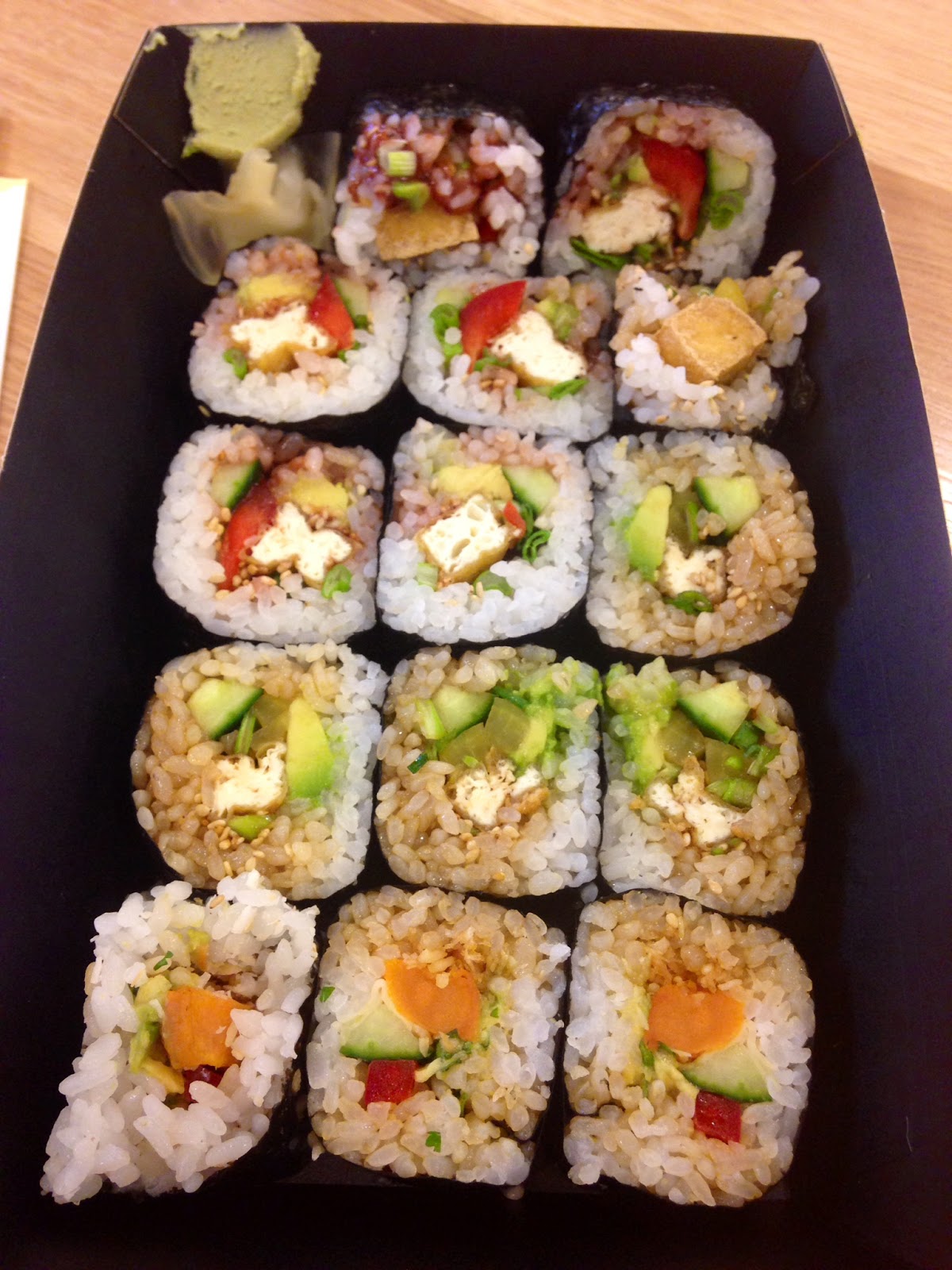 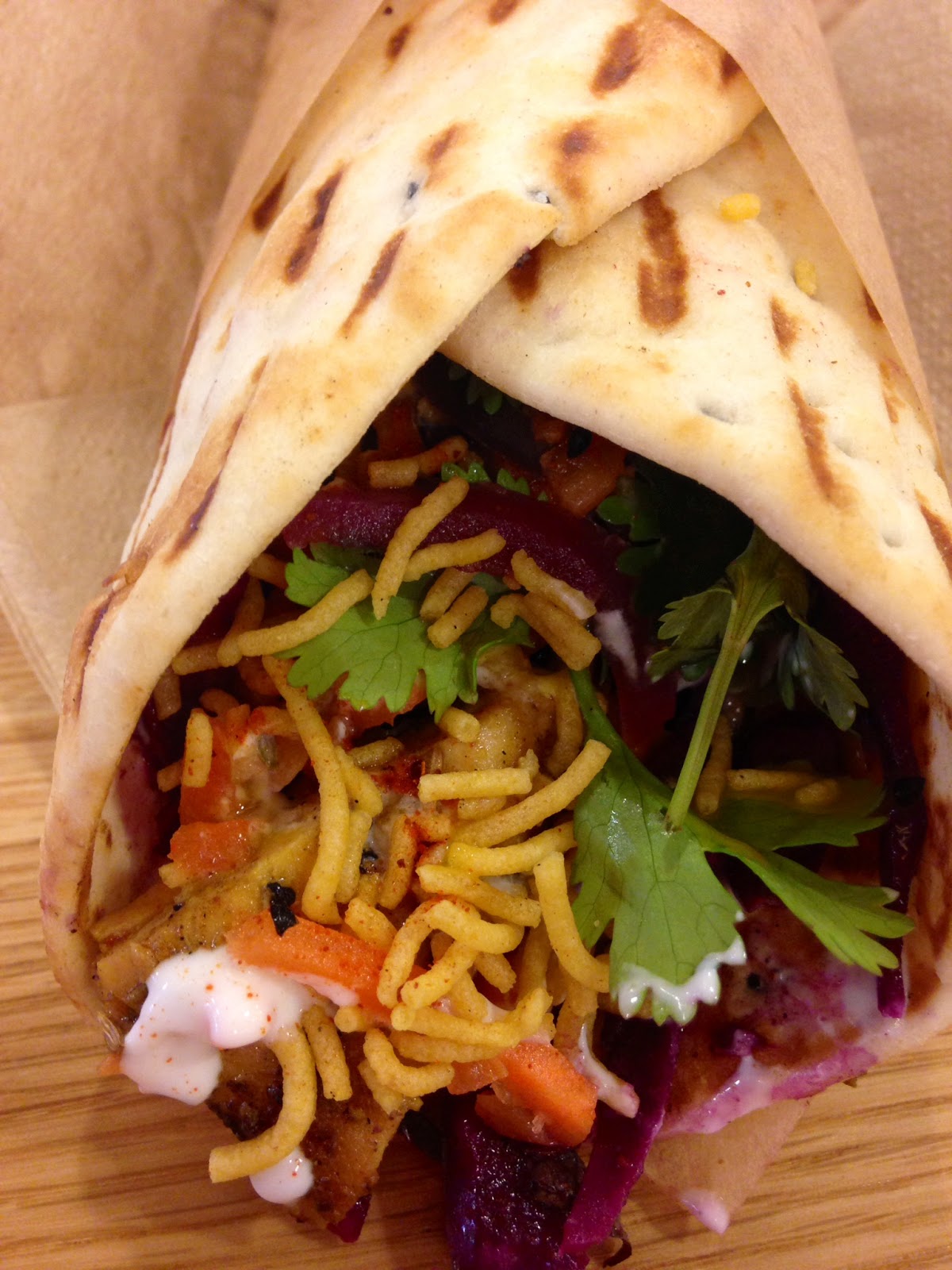 So as our train pulled out of Leeds it got us thinking that while we probably won't ever be Portland Oregon and maybe we won't be like That London, we can certainly be like our Northern brothers across the hills in Leeds where they're hitting the right notes when it comes to street food events. We've certainly got the high-quality traders and the punters who want to fill their bellies so it's only a matter of time before someone finds the right set-up and Manchester takes that next big street food leap. 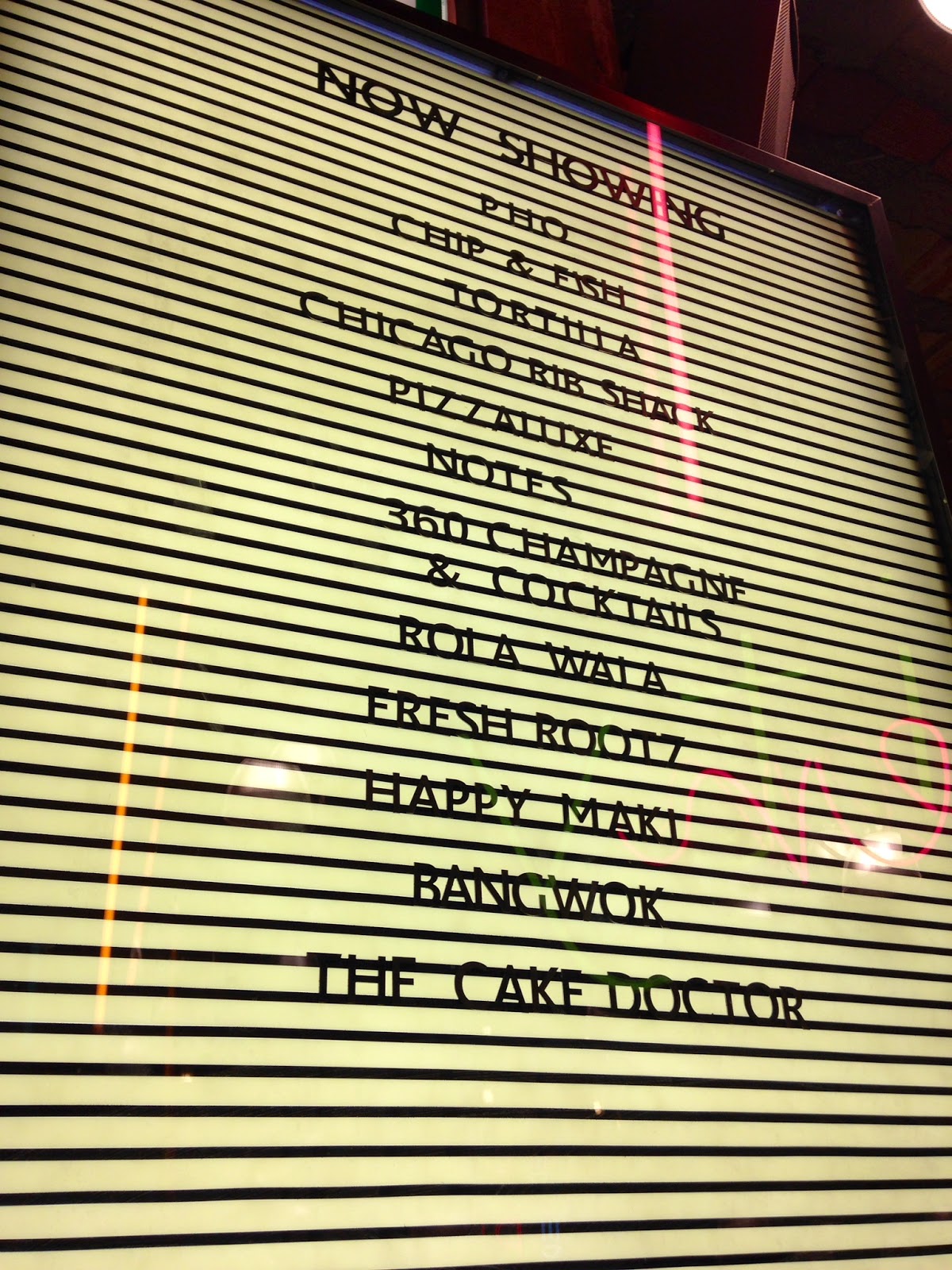