So this is a little odd - we haven't written a single blog post for the last year and we said we'd decided to knock the blogging lark on the head, but here I am writing up a meal we went for during last year's summer holiday! Why am I bothering then? Well, one of my biggest culinary regrets of all time is that I failed to follow the advice of several Peruvians who told me not to leave the country before treating myself to a meal at Astrid & Gastón, the flagship restaurant of celebrity chef, joker and all-round nice guy Gastón Acurio. While we were still in Peru I thoroughly enjoyed laughing at his cheesy TV appearances/adverts and have since loved reading his recipes and general musings on Facebook.

Last August we did a 24 hour whistle-stop tour of Bogotá on our way to visit the family in Colombia and to make up for the aforementioned misdemeanour nothing was going to stop us paying Gastón's Colombian branch a lunchtime visit. And, it may have taken me a year to get round to it, but I have always intended to make sure I wrote about this one. Fortunately it was quite a memorable meal. (Plus we made some pretty detailed notes...)

What I immediately liked about the place on arrival was that they'd managed to find pretty much the only building in the whole of Bogotá (that we came across anyway) that looked exactly like one of the colonial houses you see in the Miraflores / Barranco district that the original Astrid & Gastón is located in. It feels like a very secluded, calm little place especially when stepping in off the bustling streets of the city. 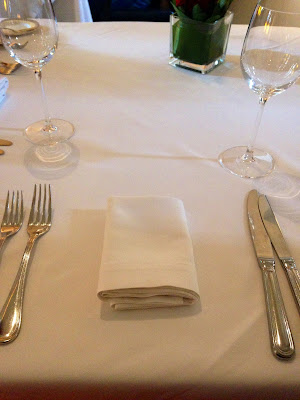 We were greeted by some pretty keen and personalityless staff and it didn't take us long to realise that the service was going to be quite a lot more nebby and formal than we are used to here in the UK. Firstly we realised that we had made something of a faux pas not dressing up more for the occasion... for example the fact that I was wearing a pair of Converse attracted two double takes from two different staff members and Bailey swears he saw one waiter peer round a corner to get a good eyeful of them... We got away with it as the idiot gringos we were but note to self, don't wear Converse to Colombian fine-dining restaurants next time. 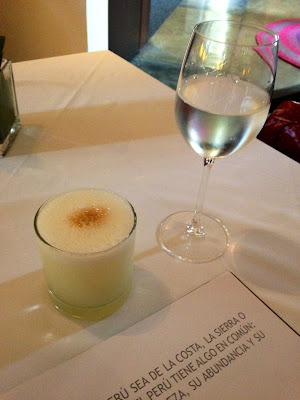 First port of call was always going to be a nice big glass of Pisco Sour which was just as citrusy and delicious as any I had in Peru. We were also delivered a very good looking slate of bread. I absolutely loved the concept behind these, each one paying homage to a favourite Peruvian ingredient or dish in bread form. There was a bread made from papa amarilla yellow potatoes, another using ají amarillo yellow chillis and cheese as a nod to my favourite Huancaína sauce, a maíz morado purple corn bread and sweet potato and quinoa bread sticks all served with lovely creamy butter. It all tasted nice enough but the only problem... the texture of all of them bar the quinoa sticks was actually pretty crap (our notes simply read "Bread not good"). I suppose we are spoilt in Europe when it comes to bread. Bailey's conclusion: "Oh well, I guess they're not doing too badly for a country that doesn't have wheat." 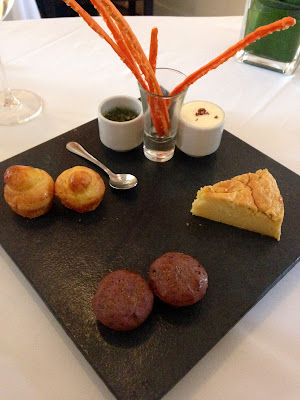 Starters next and I'd decided to go with a Tres Cebiches trio. These were simple, delicate and delicious, much like the ceviche you'd receive in Peru but with some fancier touches and presentation. I liked the fact that our waiter came over and told me to stop using a fork and get in there with a spoon so I could enjoy all the juices. 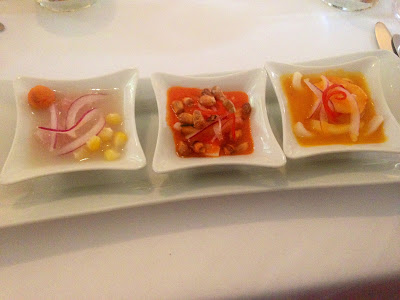 Bailey's starter was an absolute beast of a plate of Cangrejo Azul AKA a main course sized portion of black fettucini with crab, some kind of fishy foam and "sweet algae". An amazing dish, loved so much by Bailey that he sneakily retrieved a piece of crab he dropped into his cocktail, which was witnessed by one of those beaky waiters during one of their routine gawps at us. 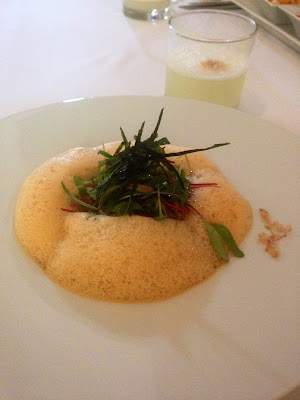 Onto the mains and by far the dish of the day for me was Saltado de Invierno. This dish was super interesting and consisted of lots of Peruvian favourite flavours all rolled into one tasty fish boat. It was served on a bed of white bean Tacu Tacu (a Peruvian type of bubble & squeak esque bean and rice patty, there may have been some sweet potato in there too?), topped with loads of beautiful seafood and lovely crispy fried fish. The sauce, described by the menu as "chifa juice" did exactly what it said on the tin, "Chifa" is the adopted name of the hugely popular Peruvian-Chinese fusion food available all over Lima, which always tastes amazing in a salty, sugary, fried, hangover-curing kind of way. This sauce tasted like an intense reduction of every delightful plate of chifa I ate while in Lima and I LOVED it!! Honestly one of the most fun and tasty things I've ever eaten. 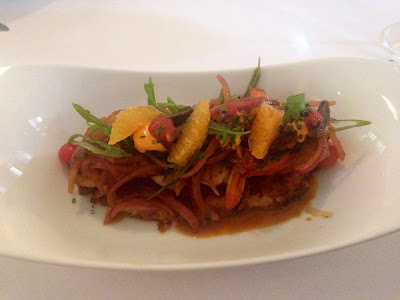 Bailey once again had won the portion lottery with his choice of Cordero Andino - an almost intimidating lamb shank served with a yuca "froth", some delightful little croquettes and a traditional Incan herb jus. While very tasty, it was with great sadness that Bailey had to leave some of this. For him, there was just far too much meat and not enough veg or sides to go with it.


Before dessert we decided to get another round of cocktails in, a Lulo Sour for me and an 'El Capitán' Pisco Martini for Bailey. Both seriously good. 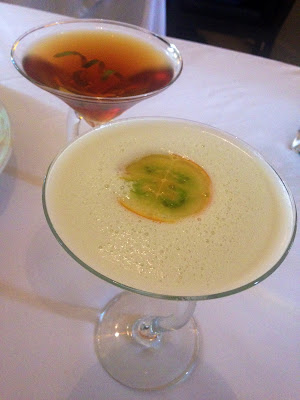 Desserts were pretty much some of the most old skool presentation ever, my Merenguitos Rellenos were tasty little orbs of meringue filled with purple corn sorbet served on chopped fruit and topped with a pinch of cinnamon, a clever take on the popular Chicha Morada Peruvian purple corn drink (which is always served with chopped pineapple and a good shake of cinnamon). 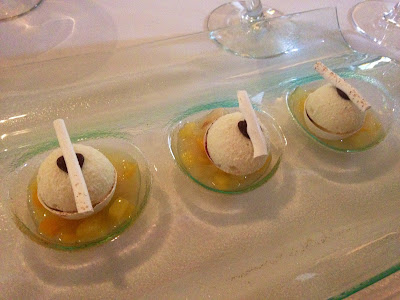 Bailey's bizarrely named Plátanos Enjaulados Dulcemente was a coconutty, chocolatey plantain affair served with a goat's cheese ice cream. It was really nice except that the caramel "cage" was nigh on impossible to eat without investing in some expensive dental treatement. 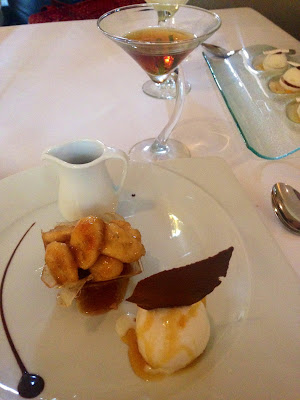 So this had already been a thoroughly enjoyable meal, even if the beaky service up to this point had been pretty weird. I'm not exaggerating when I say that several times we had noticed waiters awkwardly craning their necks to peep round doors to see how we were getting on. There was nothing natural or relaxed about it. The announcement of each dish was delivered in a bizarre robotic, trance-like fashion. It hadn't spoiled the meal in any way, just made us crack up laughing mostly. But it did make it extra nice at the end of the meal when we managed to properly start chatting to the staff over the petits fours (coffee macarons, truffles and passion fruit marshmallows - YUM) and they realised we didn't mind seeing them behave like normal humans in front of us... what can only be described as 'TOP BANTZ' ensued. They even came to the front door of the colonial house and waved us off. Lovely. 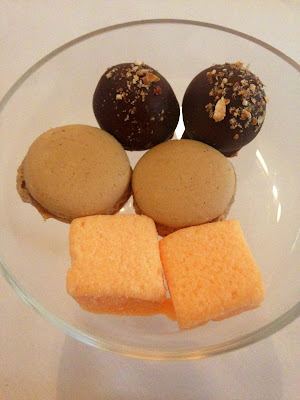 So, did it live up to expectations and was it worth the wait? Well even a year on from our meal at Astrid & Gastón I still look back at the afternoon very fondly, and probably only partly because I was so giddy with excitement. I'm not too sure if Bailey and I would have loved it so much had we not known about the Peruvian flavours and foods that inspired the dishes we had (sounds knobby I know...), but I also think that the Peruvian tendency (and I'm talking about the whole country here, not just Gastón Acurio's) to pinch ideas from other cuisines and do their own take on things is undoubtedly what made their country's cuisine so ace in the first place. Certainly more than can be said of Colombian food anyway! So if you're ever in Peru (and you should go, really really really) or Colombia (you should also go here), make sure you don't make the same mistake I did - pay Astrid & Gastón a visit, you won't regret it! 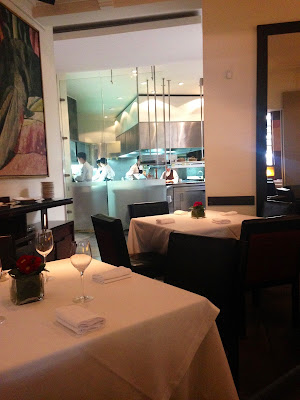