As you may remember from last year's gushing review, Indy Man Beer Con is our favourite event of the year. This is especially tall praise from me considering I don't even really like beer. This year's repeat offering most certainly did not disappoint - a BEAUTIFUL night out with a whole new bunch of weird and wonderful beers (and ciders! Yes!) just waiting to be imbibed. A rip-roaring good time was had by all. Still our favourite event of the year. 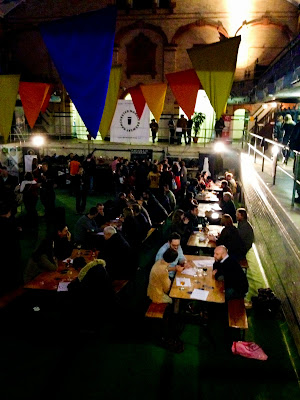 Just like last time the Indy Man honchos knew that the best thing to have with good beer is good food and once again there was tasty nosh on offer from Manchester's most beloved Guerilla Eats independent street food traders. But... there was also something rather exciting that luckily Bailey was quick off the mark enough to book us in for - a four-course 'beer and food matched meal with Tim Anderson' - you know, Tim Anderson, that one off of Masterchef that cooked all that mind-bendingly unusual food that knocked the judges' socks off. The closest we'd ever been to sampling any of his cooking was going down BrewDog for a pizza so we were really quite excited about this one. 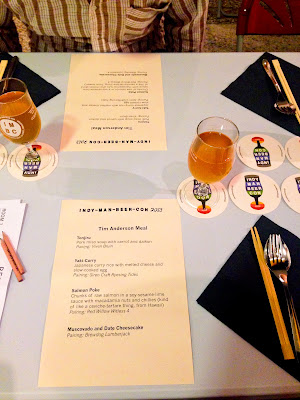 I think I'm a little bit head over heels in love with Victoria Baths so the opportunity to sneak off for an hour into a little previously unexplored secret side room away from the hustle and bustle of the beer fest was enjoyable in itself (even though it was absolutely bloody chapping meaning I had to keep my coat on for the first course). 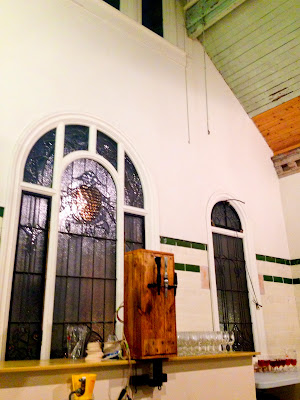 Dinner unfortunately kicked off for us with a bit of confusion regarding my dietary requirements - as a pescatarian I do eat fish and flipping love eating fish so was a little disgruntled to be brought the same pesky tomato dish twice before finally receiving the correct dish of Salmon Poke. Luckily this was worth the wait - described by the menu as "kind of like a ceviche-tartare thing from Hawaii", these moreish little chunks of super meaty salmon dressed in a citrus soy and chilli sauce were absolutely delightful. 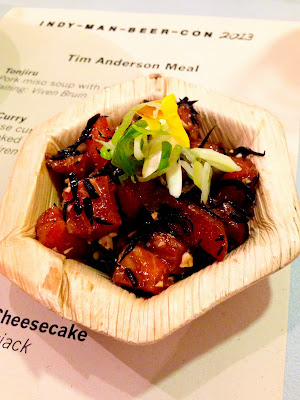 Not long after being served the salmon we were also presented with a bowl of Tonjiru miso soup - although my pesci version was served sans pork, Bailey thought mine was actually tastier - score! This was a good little broth with light, simple flavours and it warmed me up enough for me to be able to remove the aforementioned coat. 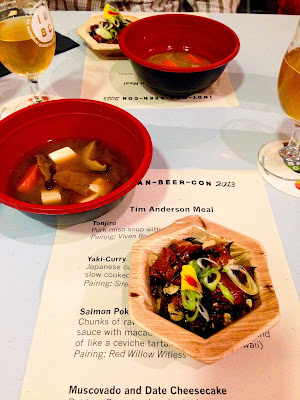 Next up was the Yaki-Curry which featured a mind-boggling mix of what reminded me of a heavily spiced katsu curry, one of them there slow cooked 63 degrees eggs, sticky rice and a hefty drizzle of beer cheese sauce. We weren't too sure about this one, firstly Bailey is funny about eggs and the whole thing sounded crazy. It was one of those things that you start off eating going "Ehhh???" then by the end you are like "MMMMM!" - I could have had another plate of the stuff. The curry was beautiful, I loved the fiery pickled ginger on top and the rice was perfect. And what of the slow cooked egg? We both loved it. I'd eat one now given half a chance. 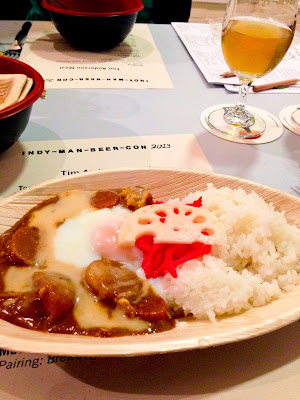 The meal was designed to be short and sweet so that we wouldn't miss out on too much beer quaffing time but at this point I have to admit was a bit glum that it was coming to an end, fortunately we had the best course and the best beer yet to come. This Muscovado and Date Cheesecake was superb, made with goat's cheese so it wasn't too rich. We loved the BrewDog Lumberjack beer that went with it too, it tasted like a super glass of Christmas cheer and was apparently rather potent. As I say this was my favourite beer pairing of the evening. The beers up to this point had been pretty good, I did like them but I wasn't too sure if the first three matched quite as well as this one, however I do apologise that I have quite a severe lack of beer knowledge. 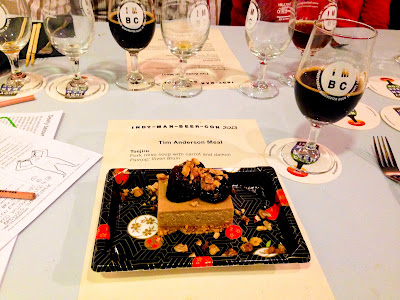 Before we went off back out into the big bad beer festival, we had one last treat, an appearance by Tim in the dining room accompanied by his helper for the evening, Jackie Kearney of The Hungry Gecko fame. Tim came across as a really top bloke, very jolly and upbeat and I enjoyed hearing him answer lots of questions from the diners. 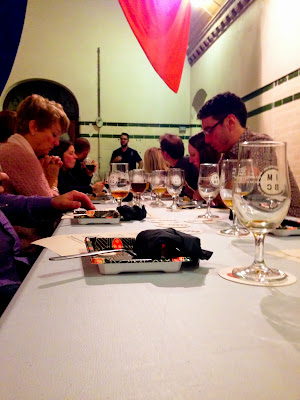 A memorable meal from Tim Anderson that evening then and a real treat for us on what was already going to be such a lovely night out, we felt rather chuffed to have experienced it all. Props to Jonny and Duncan who organise the whole Indy Man affair: truly a wonderful event which Manchester is lucky to have and I hope will continue to go from strength to strength for years to come. 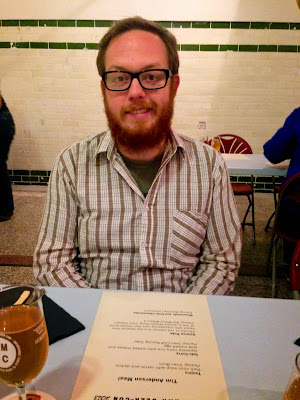 Posted by Jules at 5:39 PM No comments:
Email ThisBlogThis!Share to TwitterShare to FacebookShare to Pinterest

Our first summer in our new house and we were very pleasantly surprised to find the garden filling up with a variety of fruits including plums, blackberries, wild strawberries and raspberries. Even though I had absolutely nothing to do with the planting/growing of said fruit, there was something very satisfying about going out there and gathering it all up even though the yield may look somewhat meagre... 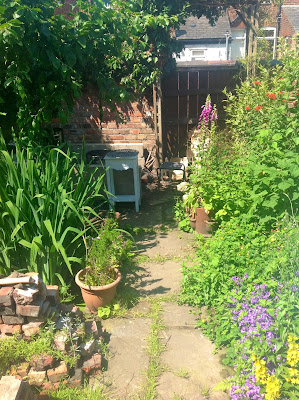 I decided I wanted to have a bash at making some booze with the fruits - something that we could enjoy later on in the year when we didn't have the sunshine to cheer us up. So, I took a bottle of my favourite pleasant yet affordable Aldi rum and filled it with all of the berries and a bit of sugar and left it to steep. Super simple! 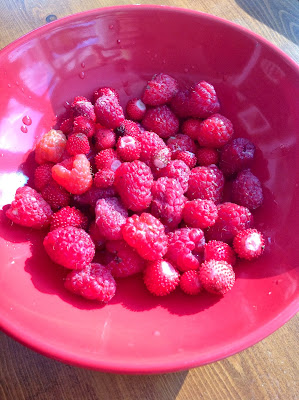 Now winter is here, the making of the rum is complete and I have been very much enjoying drinking my berry rum as a dark and warming aperitif or mixed with a dash of lemonade for a sweet, cough syrupy treat! 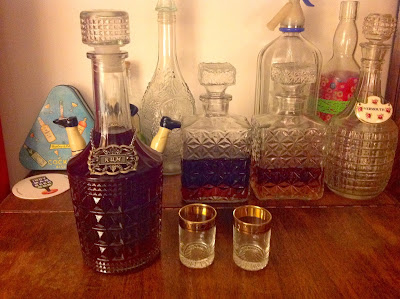 Take an old empty drinks bottle and put a funnel in the top. Pop the berries and sugar in. 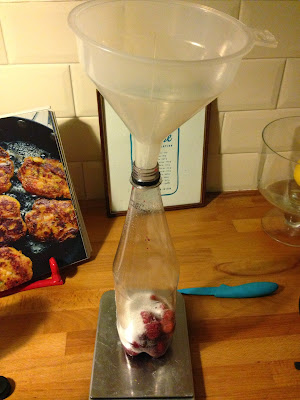 Pour the rum into the bottle too. 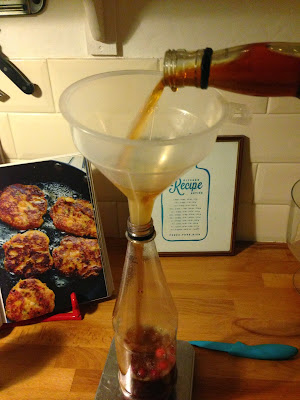 Put the lid on the bottle and give it a good shake. 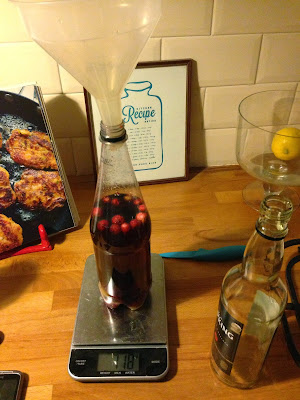 Put the bottle in a nice cool, dark place. Every week or whenever you remember, take the bottle out and give it another good shake. You will notice the berries going all smushy. 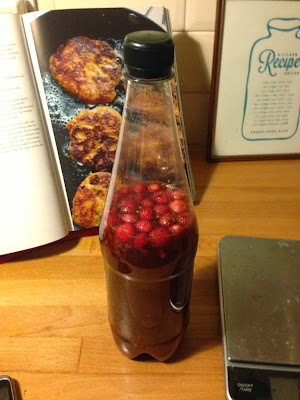 After leaving to steep for a good while (I waited two months but I guess you could leave it a year or more!), line a bowl with a tea towel or a muslin cloth. 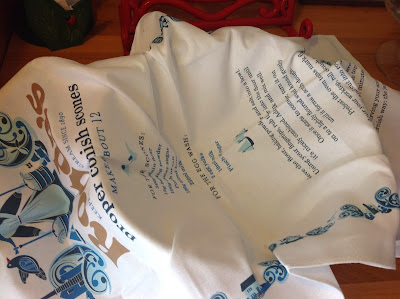 Pour the rum into the tea towel and allow the liquid to drain through. 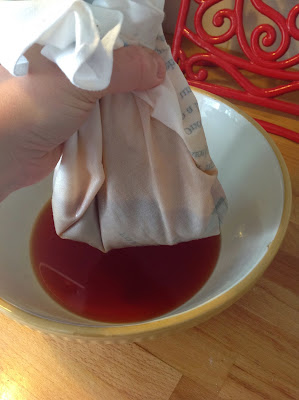 Discard the smushed up berries - I had planned to make these into some kind of boozy jam but they looked and smelled like cat sick - not recommended! 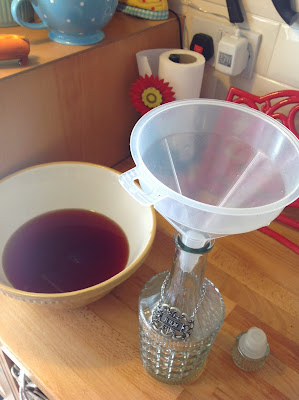 Pour the rum into a nice decanter and serve at your leisure! A perfect winter warmer. 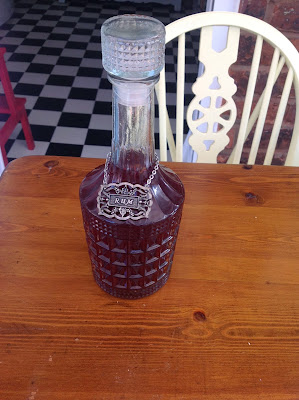 Posted by Jules at 10:24 AM 2 comments:
Email ThisBlogThis!Share to TwitterShare to FacebookShare to Pinterest
Newer Posts Older Posts Home
Subscribe to: Posts (Atom)