Kim By The Sea

Way back when we first moved to Manchester, Bailey found a random little eatery / café-bar in Hulme, that he really wanted to take me to, called Kim By The Sea. Knowing it was the type of quirky place I would love, Bailey kept it completely secret from me as he wanted to take me as a surprise. I was quite dubious about this "cool little café in Hulme" (Hulme? Really?!) but as soon as we turned up there last weekend and I saw how awesome it looked and browsed the menu I couldn't wait to go there. 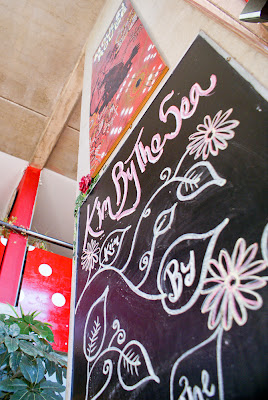 Unfortunately the first time we rocked up at Kim By The Sea it hadn't opened yet so we had to wait until last Sunday to pay them a visit. But as soon as we walked in I knew it would be worth the wait! I loved the inside - loads of big plants everywhere, cute gingham tablecloths, fairy lights, polka dots and even seagulls hanging from the ceiling - what a funky place! 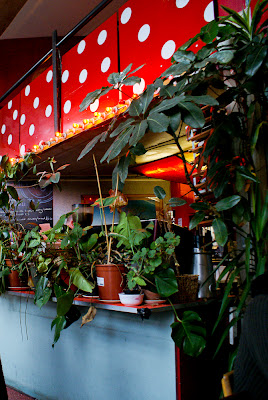 On closer inspection you can't help but notice that the place is a little rough around the edges but that sort of fits in with the ambiance and its constant hordes of rather 'bohemian' clientele don't seem to mind this at all, in fact I think that's part of the attraction. 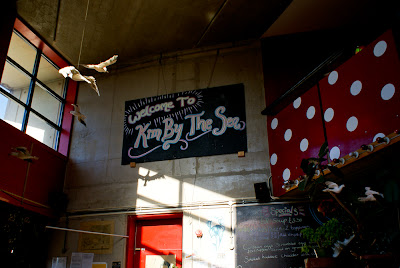 We were quite impressed to see that as well as the usual menu (which has the type of food I love eating in veggie cafés but then the added bonus for meat-eaters like Bailey of actually serving meat!) Kim By The Sea also do a Weekend Menu which serves posh breakfasts and lighter bites. However, being the fatties that we are we both ordered heftier meals from the usual menu and were very excited. 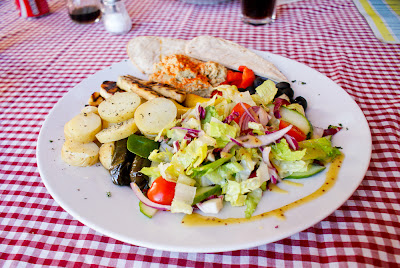 I decided to order a platter of Griddled Halloumi accompanied by potatoes, houmous, pitta, salad, pepers and olives. When it arrived it was absolutely massive. I am pretty greedy and I was hungry so I knew I was going to be able to polish it off but lesser ladies would certainly have been defeated by the mammoth plate. 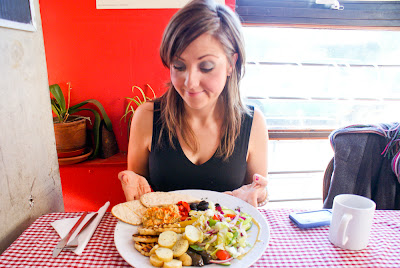 The halloumi was really gorgeous - a lot toastier than how I normally make it but this was amazing. "Squeaky Cheese" at its best - I am always going to make it lovely and toasty like that from now on. The potatoes it came with were lovely, the houmous was garlicky and tasty, the salad was crisp and the dressing delicious. My only complaint would be the olives did not seem to be Kalamata olives as advertised by the menu but otherwise the whole meal was an absolute treat and it filled me up for ages. 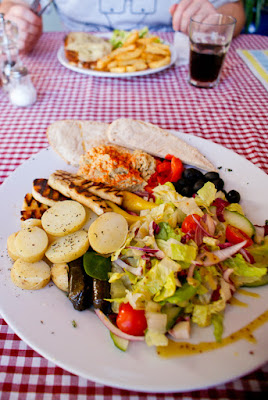 Bailey was quite jealous of my halloumi and even though I let him taste a miniscule scrap, he kept threatening to steal it off my plate so I had to eat vigilantly. 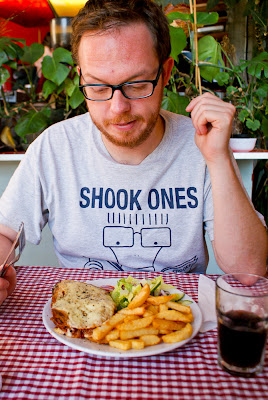 Bailey decided to go for the Lamb Lasagne which came with chips and salad. Bailey was pleased as it is not often that you see lasagne with chips on a plate together, yet it is one of his favourite combos. He thought the lasagne tasted lovely - super meaty and flavoursome filling with plenty of cheese and unhealthy-tasting sauce. Apparently you could taste "every layer of pasta" too. Yummy. He thought the chips were perfectly fried and crispy and went really well with the lasagne. 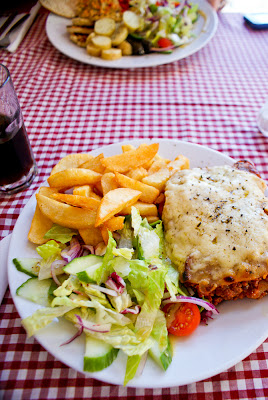 To use the words of Bailey who is not much of a salad-eater: "Even the salad was nice because it had some sort of nice dressing."

We would definitely recommend a trip to the super cool Kim By The Sea. Their luscious food at reasonable prices (around £20 for two huge meals and drinks) guaranteed them a return visit from us. It would be a great place to nurse a hangover and with food to suit all tastes it's the perfect place to visit with friends. 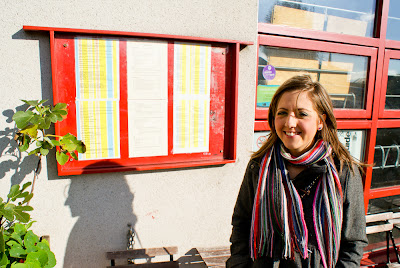 Posted by Jules at 8:11 PM
Email ThisBlogThis!Share to TwitterShare to FacebookShare to Pinterest