Afternoon tea is popular. It doesn't seem like long ago that they first started popping up here and there, well now everywhere seems to want to get a piece of the afternoon tea action. We like afternoon tea, we like it very much. However there are so many places doing the afternoon tea thing so well in Manchester (Vintage Afternoon Teas and Richmond Tea Rooms are two of our favourites), I personally think anyone launching a new afternoon tea really needs to have their own unique selling point to make it stand out. Well, 24 Bar & Grill are doing just that with their brand new Hendrick's Gin Afternoon Tea. We were very excited to hear about this when we were contacted by Amy, who is in charge of 24's PR, to invite us to come along and give it a go. 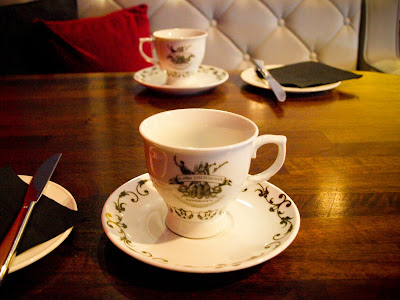 You may be unaware of 24 Bar & Grill as its doorway is quite unassuming (something they are looking at fixing, apparently), but once you nip down the stairs you're greeted by a classy grill restaurant to your left and a rather snazzy bar to your right. They're certainly not short of space down here, and very pleasant it is too. We loved the comfortable mini booth we were seated at. I also almost squealed with delight when I saw the Hendrick's teacups and saucers that were waiting for us on the table. Can I get some of these to take home? 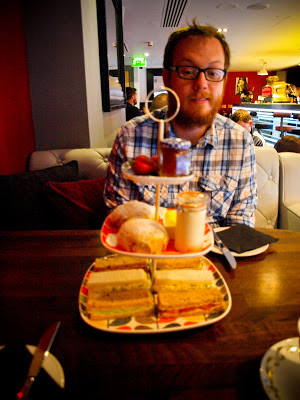 Now as I said earlier I really like an afternoon tea with something a little different on offer and we both thought having gin to sip on was a truly splendid idea. Of the two choices - Gin and Green Tea Cocktail or Gin & Tonic with lime and cucumber, we decided to go for the latter - more traditional. I was very interested in the tea-based one though and will be sure to order that one next time. This G&T one was a great cocktail with the cucumber pleasantly coming through. The pot yields 6 teacups of cocktail which we thought was a generous amount. 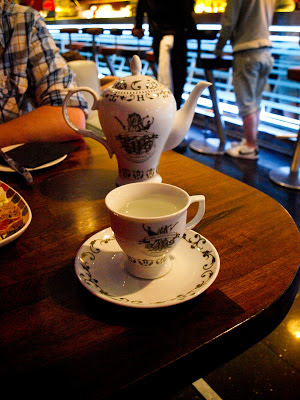 Before too long we were also presented with a stand of food which also had a bit of a Hendrick's 'flavour'. The finger sandwiches were beautiful and perfectly presented and contained three different fillings: cucumber with a beautiful salty butter, egg mayonnaise and gin cured smoked salmon. The salmon was our favourite - the gin really amped up the salmon flavour and was delicious. Our only complaint about the sarnies was that they were a tad dry on top; a shame as we wouldn't have minded a jot sipping on our cocktail whilst waiting for them to be made fresh. 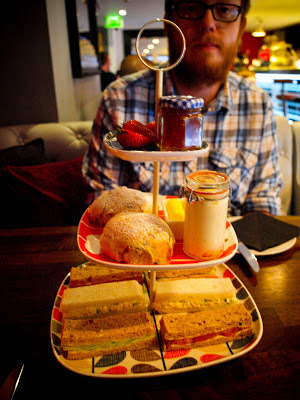 Next were two scones which were very good - big bad boys that were crispy on the outside and fluffy yet crumbly like a scone should be on the inside. These were served with Chantilly cream and a Hendrick's and Vanilla Jam. Yet another splendid use of gin and we cleared the jar out! Another thing I was super impressed with was that we got some more of that fabulous butter to go with our scones - Bailey had been discussing just a few weeks earlier whether 'cream vs butter' is a north/south debate or not, so it was great that these guys had just given us both and let us make up our own minds. 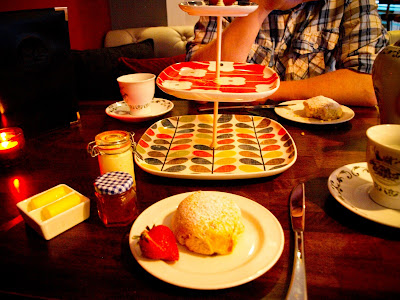 It's great to see bars like 24 trying out new ideas like this and we think it has the potential to do very well. We also thought the Gin tea's pricing of £19.95 is good value considering the standard of the food and the amount of good quality booze you get. However I personally do like a wee cake with my afternoon tea and wouldn't mind paying an extra fiver for a mini cake of some sort each.

Overall we thought this was a pretty nifty idea and a more interesting environment in which to enjoy an afternoon tea. We liked the slightly more modern presentation of everything too as, although I love all things vintage, I think having another purveyor of afternoon teas in flowery teacups might have been one too many. We thought the Hendrick's Afternoon Tea would be a great way to kick off a night of debauchery, an ever so classy hen party or a date night. Give it a go for a 'different' afternoon tea! As for 24 Bar & Grill, now that we know of its existence we will definitely be returning to their restaurant, if not for another afternoon tea or one of their food and craft beer tastings that Bailey was very intrigued to read about - they are obviously full of good ideas! 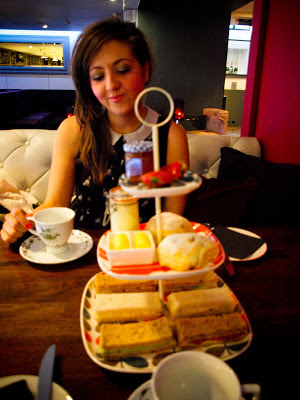 Posted by Jules at 1:57 PM
Email ThisBlogThis!Share to TwitterShare to FacebookShare to Pinterest