I'm not a big fan of conversion.  People of a religious persuasion who come to my door in the hope of a conversion always leave disappointed.  There's something about the word that implies you are being converted against your will that makes me feel a little uncomforatable.  That said it definitely looks like BrewDog are in the business of converting people but luckily they aren't asking you to base your entire belief system on a millennia old book that featured no jokes or plot twists.  No, they are attempting to convert BrewDog fans into BBQ fans and BBQ fans into BrewDog fans, a much more admirable cause.  For me though no conversion is required, if you draw a venn diagram with BBQ and BEER as the two factors I am firmly in the middle section.  Jules on the other hand is no where to be seen on my venn diagram instead she is elsewhere firmly lodged between two circles, one labelled as marmalade based cocktails and the other as houmous and as a result Jules was not as enthused as being invited by BrewDog to come along and check out their new meaty BBQ menu.  We reviewed their old menu and the bar itself a little while back so click here for a catchup. 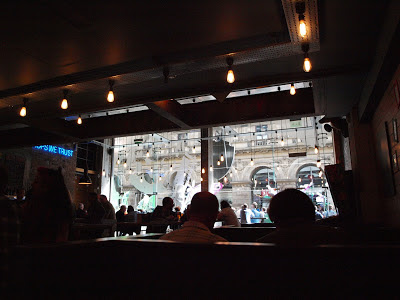 There was an element of bad timing here as firstly we had only just returned from a 3 day camping trip to Great Langdale and so had been consuming plenty of beer and basic BBQ food for some time.  Something in me told me I could manage one more day though so no problem there.  Secondly it seems that BrewDog (famous for their radical business decisions and trend setting) are coming at BBQ when its popularity is already in full swing.  That said Manchester is well behind London in the BBQ restaurant stakes as all our restarauteurs appear to have been infected with a mind controlling virus that compels them to open burger shack after burger shack and the top dog of the Manchester BBQ scene Mr Fire & Salt BBQ is a roaming vagabond still of no fixed abode. 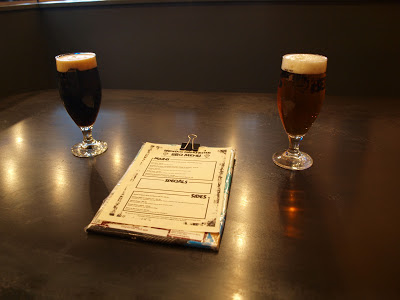 The menu is short and sweet and as soon as I saw it I knew I was going go for the Hardocre Ribs with mac 'n' cheese.  It should be noted these ribs are only available Friday to Sunday after 3pm.  The menu proudly proclaims the meat is procured from Chorlton's favourite son Frosty The Butcher which is a bonus point straight away.  Add to that the fact that they also use Chorlton's favourite bakers The Barbakan and we are on to a real winner.  The meat can only be described as Flinststones-esque in its appearance (this is a good thing) with a very eye pleasing char on the exterior which didn't disappoint in flavour either. 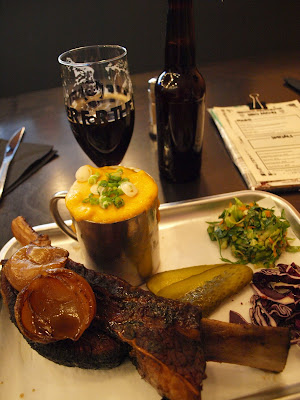 Now then for some people the meat might have been a little bit too well done on the exterior but I quite liked that combination of char alongside the great coleslaw and banging BBQ sauce they had on offer.  And for those of you that like that super moist flesh then that was just below the crust closer to the bone, that stuff just fell off the bone.  I went at it with my utensils until they became inefficient and then I downed tools and went in with my hands to make sure I got every last scrap. 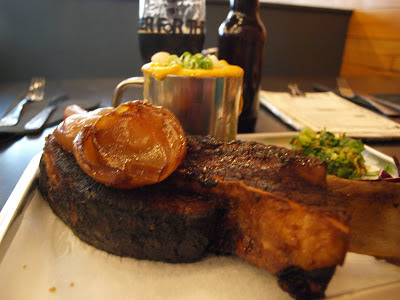 So it was a really good bit of BBQ meat but the one thing that absolutely blew me away was the mac 'n' cheese.  I bloody love mac 'n' cheese and frequently order it only to be disappointed that it is not quite as good as our home cooked version but this one was head and shoulders above any mac 'n' cheese I've ever tasted.  The consistency was perfect, there was no graininess and most importantly it had some other flavour to it, there was a real smokiness that ran all the way through it.  Bloody amazing and worth a trip to sample this alone.  I would think that BrewDog would do very well if they turned this in to a main course dish providing another veggie option on the menu as well as directly making me happier. 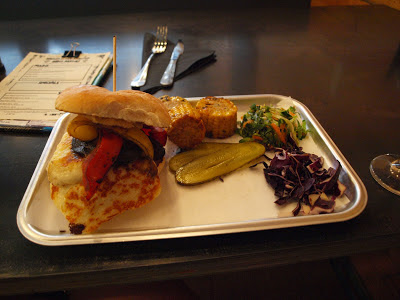 Jules went for the halloumi and mushroom burger, she didn't have much choice as this is the only veggie option on the petite menu but as soon as she saw it she knew that it was going to be brilliant.  Even I as a card carrying meat eater went 'ooooooh' as it slid under my nose.  The Barbakan bread was really trying its best to contain the hefty rack of halloumi as well as the excessively stacked veg but it could not complete this gargantuan task without the aid of the normally redundant burger spike.  With each bite the burger spike had to be removed and strategically replaced to ensure the structural integrity of the monster burger did not fail.  My instant reaction was that, for once, somebody has realised that vegetarians like dirty food too and the veggie option doesn't need to be the healthiest dish.  Bravo.  The bread was soft, the peppers were sweet and smoky, again the slaw & cabbage rocked.  Jules loved it.  Not only that but Jules also drank a half of BrewDog's 'Fake Lager' and really enjoyed that too.  This is quite an achievement. 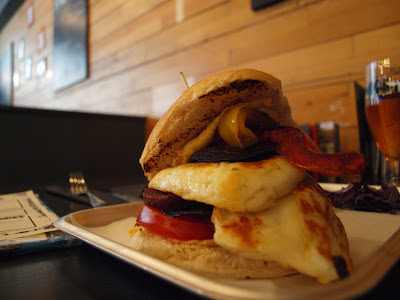 So the food is very good, the beer is obviously still very good and the staff are still top notch therefore I think BrewDog are going to get exactly what they are after, more converts.  If they can take a vegetarian who dislikes all beer and move her right in to the middle of that venn diagram then I'm not sure who will be able to resist their master plan.

Posted by Bailey at 9:18 PM
Email ThisBlogThis!Share to TwitterShare to FacebookShare to Pinterest