We couldn't have been more excited to try CIBO - the hot new Didsbury restaurant that has had tongues wagging with nothing but good things to say all over Twitter since the moment it opened. It wasn't until a review from The Hungry Manc appeared that there was anything less than positive to be heard about the place so we, like him, put his experience down to "a bad day at the office". Cibo's concept of serving rustic, Venitian cuisine sounded great and the menu looked both delicious and reasonably priced. We were long overdue one of our nice midweek meals out with our fabulous friends Rob and Kat so booked ourselves in for a table for four. We were so excited we didn't even mind missing The Apprentice! 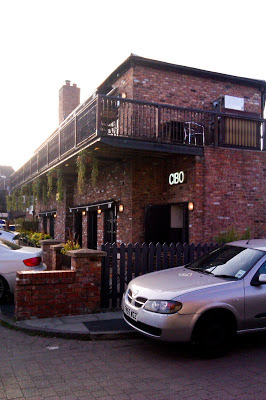 Things started off swimmingly as we arrived at the beautiful, light and airy restaurant. Some serious thought has been put into the interior of this place and it can only be described as "lovely". I can imagine this place will go down very well with the local folk of Didsbury as it's just the right side of fancy but with a few quirky touches here and there. 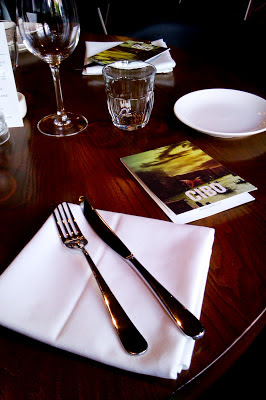 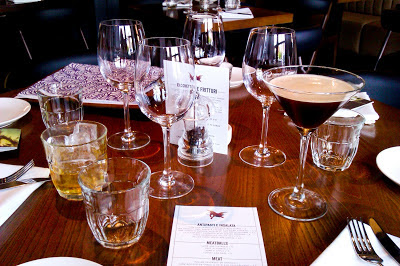 With Kat and Rob arrived and seated, food ordered we were having a splendid time in the lovely restaurant. You can't beat a good chat with friends on a sunny summer evening. I was really impressed with the complimentary bread and olives we were given, and loved the fact we got one of each per two people! 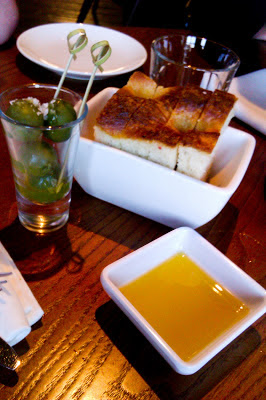 With the bread and olives rapidly dispatched and cleared away, the antipasti arrived swiftly afterwards. My Tuna Loin Carpaccio Dressed With Citrus seemed to be a bit of a funny colour but tasted great and was a light, refreshing starter for a summer's eve. I wasn't too sure if it was worth the £9 I paid for it as it did remind me of a less plentiful version of a dish I once had in IKEA's canteen! 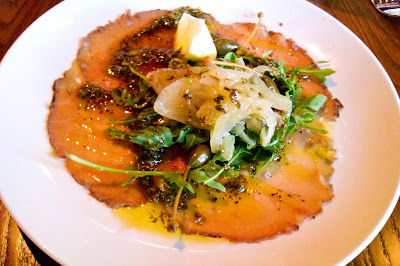 Bailey and Kat had both decided to mix things up a bit and order a couple of Pizzettes as starters. Bailey's little Four Cheese number had a light, crispy base but the cheese topping wasn't very flavoursome. As per what we'd heard on Twitter, Rob's Beef in Tomato Meatballs were excellent and he was very impressed. 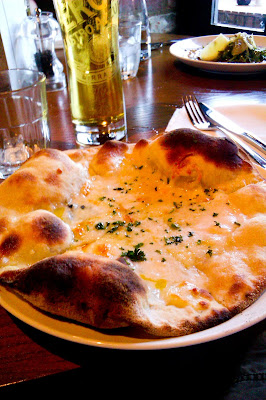 Next came the mains and there appeared to be rather a few issues getting the food out to the table. Despite the fact both Rob and Bailey had ordered the same main - Rib Eye Steak With Rosemary with side orders of fries and spinach, we got one portion of fries, one steak and one of my side dishes. We then waited for a good while more for mine and Kat's mains and Kat's sides to be brought as well as another steak. We then had to ask the waiter for our fries which took another couple of minutes. While the staff were quite efficient in dealing with this and checking we'd gotten everything, there was no apology offered from anyone or recognition that we might have been a bit miffed.

Due to what had obviously been a bit of a cock up in the kitchen, there was quite a lot of inconsistency between our dishes. Rob's fries were crisp and well seasoned while there wasn't a single grain of salt to be found on Bailey's. The first steak to arrive had been sat on a stone cold plate for a good while before it could be tucked into and therefore was lukewarm at best. 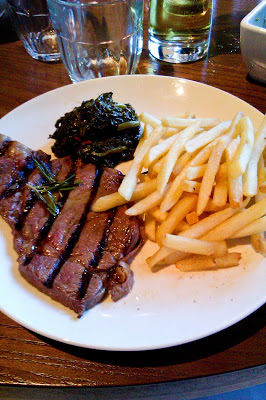 I'd been really looking forward to my Monkfish with Tomato and Olives and was not disappointed with the gorgeous, rich tomato sauce. However, for me to pay 9 quid for a fish main I'd expect more than a few scraps of chewy fish in a tiny bowl. The side order of Spinach was tasty but I struggled to find more than one soggy bit of aubergine in the Caponata Sicciliani which tasted of tomato and little else. 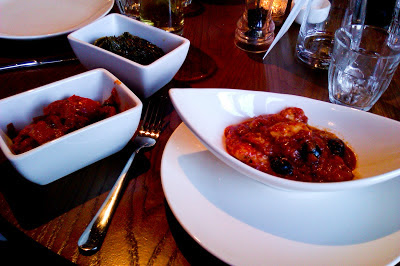 I decided to skip dessert and went for a very good, frothy Cappuccino instead with a crunchy little biscotti - a nice end to the meal. Had I not been driving I would definitely have gone for another Espresso Martini as it really was my favourite part of my visit to CIBO.

The others did get stuck into the desserts - Tiramisu for Bailey and Chocolate Hazelnut Cake for Kat and Rob. Both very decent desserts with the Chocolate Cake being the favourite of the evening. 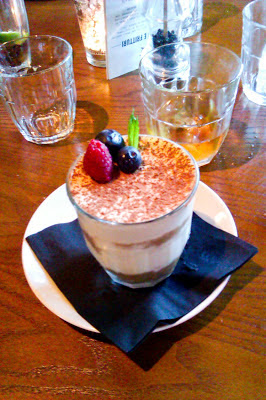 So was our visit to CIBO worth missing The Apprentice for? Well I have to say we did have a really nice time and there are lots of things that CIBO are doing very well. As I've said before the restaurant itself is beautiful and the atmosphere was relaxed. While the service was described by Bailey as "too beaky" the staff on the whole were very attentive and they obviously cared about us as their customers. The bar is also a strength - I would definitely go back in for more cocktails on the terrace and Bailey and Rob were pleasantly surprised at how inexpensive their whiskeys were when we received the bill. 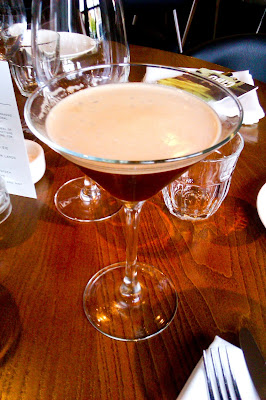 However, from what we saw of the food, it does need a bit of work and I hope the restaurant will view our criticisms as constructive. I'm also afraid our initial impressions of the menu being reasonably priced were, for me, not quite right - I felt that the prices were too high and that by the time you've ordered enough sides and bits and bobs to fill yourself up, you're looking at quite an expensive meal for what you actually get. 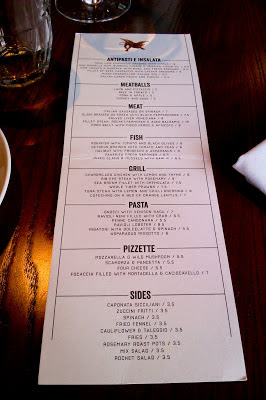 After our disappointing meal and our usual 140 character Twitter review, CIBO did get in touch to say they are currently looking at improving the menu and it's always nice to see a place trying to better itself. While it was unfortunately another "bad day at the office" for us, I hope that more people will give CIBO a go as there is still a distinct lack of quality places in Didsbury Village. 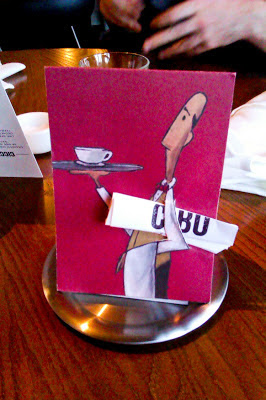 Posted by Jules at 10:24 AM
Email ThisBlogThis!Share to TwitterShare to FacebookShare to Pinterest