They say birthdays become less of a big deal the older you get, that you almost stop celebrating them once you're a "grown up". Well that doesn't seem to be the case for me (possibly because I rarely behave like a proper "grown up") - the haul of presents I was given this year from friends and family was impressive (thanks friends and family!), the length of the birthday celebrations was bordering on ridiculous and included an overnight stay in a hotel, two tea parties, a gig and a trip to The French (thanks mum, dad and Bailey!). After all that, the events of my actual real life birthday did seem a little low key but exactly what I fancied - a nice trip to Vintage Village and brekkie at West Didsbury's most famous Thyme Out Deli. 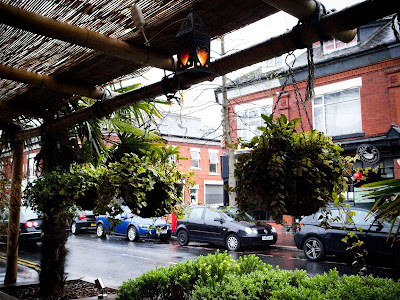 However, disaster struck when we discovered Thyme Out to be absolutely chocka with not even a little space for the birthday girl. Seeing as unfortunately I am technically a "grown up" I wasn't able to do what I wanted to which was tell the punters to give their tables to me because it's MY BIRTHDAY. Instead I had to do the "grown up" thing of actually going and finding somewhere else to eat. Gosh. 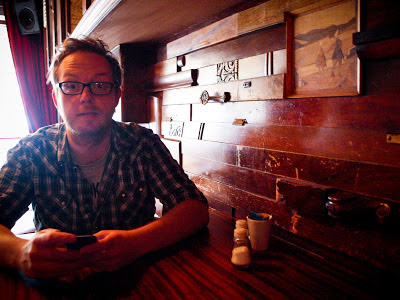 After much deliberation we decided on Folk Café Bar just around the corner, which we knew very little about but I liked the crazy website. It was an agonising decision and we didn't know if we'd made the right choice until we bumped into our favourite restaurateur Haz of Mughli fame - if he likes Folk, it must be good. 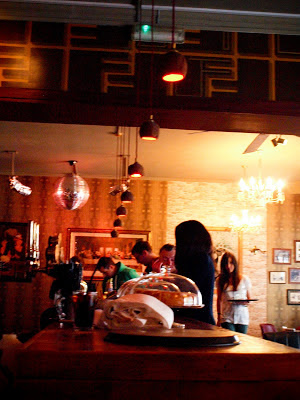 We kicked off the birthday celebrations with a nice portion of Dips and Pittas. This was exactly the type of food I was after and I loved the way all of the dips tasted like really really good healthy and hearty home made versions. I loved the pesto, which wasn't oily at all and packed a good punch of basil. 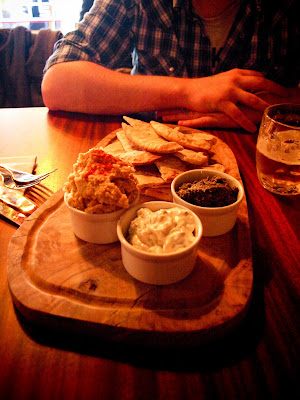 Once again Folk had exactly what I fancied on the menu which was a delicious, juicy Griddled Halloumi and Roasted Vegetable Wrap. This was perfect for a Sunday brunch lunch. I also thought the Soup of the Day for an extra £2 was such a good deal it would have been rude not to. The soup in question was immense - who'd have thought Tomato and Coconut could work so well? One of the best soups I've had in ages.

Predictably, Bailey went for the biggest burger on the menu, entitled the Hungry Folk. This was a Sunday treat of a lovely, well cooked and fresh meaty burger which had the rare quality of staying together while you ate it rather than ejecting its toppings all over the shop. It was served with loads of cheese, loads of bacon and piping hot and crisp chips - what's not to love? 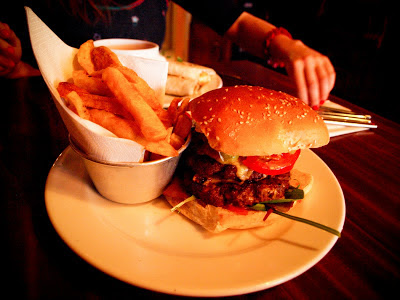 I have to say that after spending the previous evening enjoying the dizzying food highs of The French, Folk probably had to work harder to impress us than usual but we loved it. Service, food and bar were all excellent. In fact I recommended it to someone just a few days later who also loved it. I am definitely going back for a slice of their interesting sounding cakes (one of them that was on that day had a 'mystery ingredient', ooh). Another thing I forgot to mention, they do a banging coffee. Happy birthday to me! Posted by Jules at 6:44 PM
Email ThisBlogThis!Share to TwitterShare to FacebookShare to Pinterest