The Golden Pheasant at Plumley

I've just this last week broken up from school for six whole weeks. Apart from this being the most giddy-inducing time of the year (yes, even more than Christmas), this is also the time of year to say goodbye to staff who are leaving. My colleague and fellow languages teacher Andy is moving on from our high school after over 30 years of working there - amazing! He is a really great guy and Anne wanted to make sure we gave him a good send off so for a goodbye meal he suggested we go to The Golden Pheasant at Plumley. 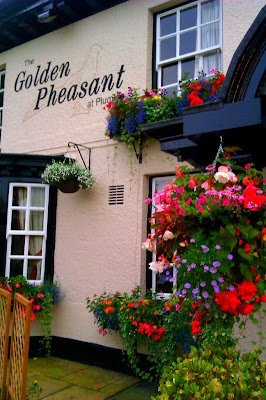 I was looking forward to this as Bailey had read some very positive reviews on the Internet about their posh pub grub and I'd also had a personal recommendation from my friend Steve who said they did some of the best chips he'd ever had. It was also quite an adventure to get there as we had to catch a rickety local train to Plumley from Piccadilly that stopped here there and everywhere between there and Chester. A very exciting and very scenic train journey indeed. 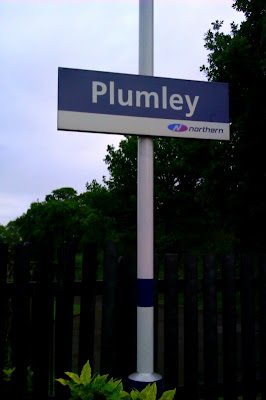 The arrival at the Golden Pheasant was very lovely - it was a beautiful summer's evening in Cheshire and we arrived just as the sun was starting to think about setting. The train pulled into Plumley and all we could see in the distance was the most lovely country pub standing proudly in the middle of nowhere.

Inside the pub I was very pleased to find Anne and her husband looking really chilled, sipping on a G&T and relaxing in old wing back chairs. She looked really happy and I think this was thanks in no small part to the homely and cosy atmosphere in the pub. When Andy and his wife arrived we perused the menus while still sitting in the comfy chairs and didn't have to move to our table until after we'd ordered which I thought was really nice. 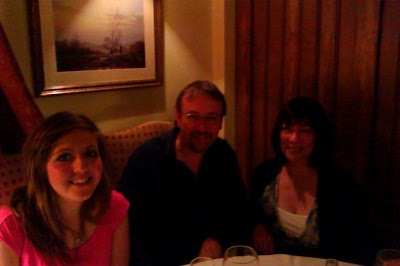 The food on offer at The Golden Pheasant is basically British pub food, a bit old school (e.g. Traditional Prawn Cocktail is the first item that appears on the menu) - but the sort of food you want / expect when you're in the middle of the countryside. For our starters Bailey and I both went for fishy dishes. Bailey chose the Salt and Pepper Squid - served piping hot, seemingly fresh out of the fryer and with a super crispy batter. It came with a sweet chilli sauce which Bailey felt wasn't really necessary as the batter was full of flavour. The squid was a tiny bit on the chewy side but still a good starter overall.

I love it when the starter I've chosen causes food envy and this was one of those joyous occasions! Apparently Anne's husband was still lamenting it the next day! I'd chosen the Scottish Smoked Salmon and not only was it absolutely massive it was really tasty too. I loved the old school triangles of bread and butter, the salady bits and the fact that there was absolutely loads of lovely quality smoked salmon piled about the plate. 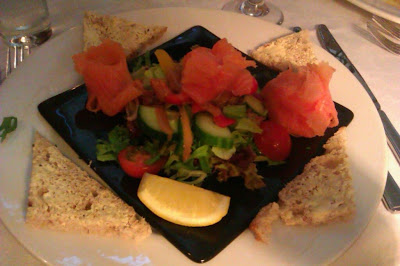 As these famous Golden Pheasant chips came so highly recommended Bailey wanted to make sure he ordered something which came with them. This was a pretty simple choice for him as they had one of his very favourite pub options which is the double-carb wonder of lasagne and chips. The Golden Pheasant's Chef's Homemade Lasagne was really good with loads of flavour but perhaps not quite the right sort of flavours in Bailey's opinion. He described it as a "pub lasagne rather than an Italian one, but done really well." So what of the chips? Well, Steve had said to me: "You know when you get one or two perfect chips at in a bowl of chips that are perfectly crispy but soft in the middle? The chips at the Golden Pheasant are all like that". Expectations were high but Bailey said that although they were "chunky, crunchy great pub chips" they weren't quite as good as he'd hoped from the description as his batch were a bit underdone and not as fluffy in the middle as Steve's. 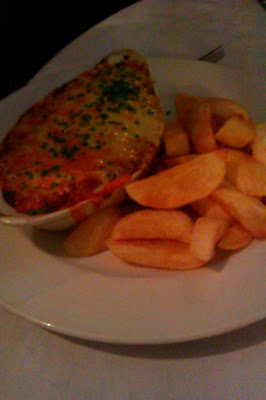 My main was the 'healthy option' Smoked Mackerel and Prawn Salad which I really fancied after my delicious starter at Harvey Nicks a few weeks ago. It wasn't quite as posh as that one but I loved the texture of the mackerel with crunchy coleslaw, creamy potato salad and plenty of salad leaves. The little prawns were quite nice and worked well with the Marie Rose sauce on top. Not the most mind bending of salads but I was very pleased with my choice all the same. 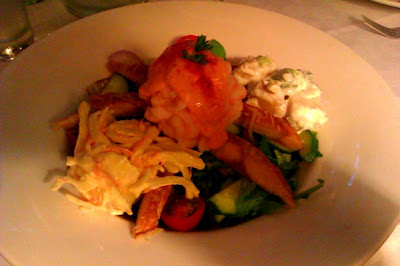 We felt overall the mains were very good and everyone mentioned how big the portions were (in fact me and Bailey were the only ones who ate everything up - of course we did). I thought the food all seemed to be very well put together and I loved the fact you that there were pots of Piccalilli with Andy and Julie's Plumley Honey Roast Ham, Egg and Chips.

We had a really lovely evening at The Golden Pheasant and left feeling very sleepy, full and happy. Although we had a great time and it's a very nice place to spend an evening I'm not too sure if we'd go all the way back to Plumley (a 50 minute train ride) just to go to the pub unless we were taking someone there or we were in the area. However, I know that Steve was saying it's definitely worth a return visit for him as there's an amazing children's play area for his girls so I guess it would be a really nice family day out. Thanks to my fab colleagues Anne and Andy for the recommendation, the top company and the fact that they refused to let Bailey and I pay for our meal, the silly billys. 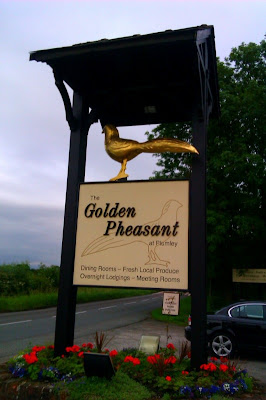 Posted by Jules at 4:52 PM
Email ThisBlogThis!Share to TwitterShare to FacebookShare to Pinterest