This month's Foodie Penpals box was sent to me by Jess from The House Tales. I didn't tell Jess much about myself other than that I'm not really a big snacker. Well, she really put together an amazing parcel for me this month and I absolutely loved it! 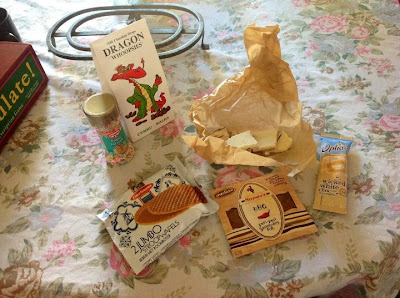 The note Jess sent with the treats was written on a Norwich postcard - very exciting as it's so far away but I am familiar with the place due to my friend living there and it being near where some of my family live. All the items in the box were really thoughtful and there were bits and bobs from all over the place which I really like!

Jess included some 'Dragon Whoopsies' (which were basically dragon poos, erm, I mean chocolate drops!), some sprinkles for my cake making, some Options white chocolate which is already one of my favourites but that I haven't had in ages (perfect!) a pack of Jumbo Stroofwafels filled with caramel (drool!) which I have actually been saving but I think I'm going to finally nail them tonight!

Another thing that Jess sent was some Nando's Piri Piri Seasoning which sounded amazing. As I'm not a meaty person I thought maybe I could try it out with some roasted veggies. Well it just so happened that my parcel arrived on one of the hottest days of the year. What better time to roast up some piri piri roasted veg and eat with cous cous while sitting with my feet in a paddling pool of cold water?! Very yummy and spicy they were too. 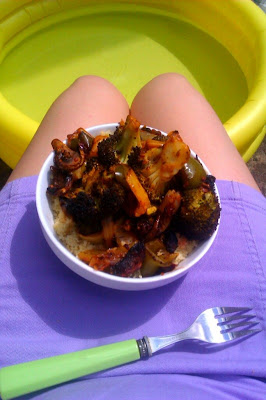 Even more brilliant than any of these awesome things that Jess sent was my very favourite Foodie Penpals item EVER - this lovely Chocolate Bark! It was fantastic and had sea salt running through it which was quite subtle but occasionally you'd get a really salty hit that would make you go "Ooooh!" ... I have to admit this didn't last long with me and Bailey around! 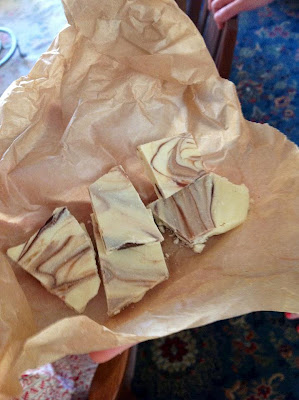 I wanted to say a huge THANKS to Jess who really came up with a fantastic parcel for me. What a star! My penpal for this month was Naomi who strangely enough was also from Norwich. She told me she was a fan of Italian food and Bailey's! So a trip to Épicerie Ludo sorted her out with some smoked garlic, tiny pasta for risotto making, some buckwheat crêpe mix and a pot of Chocolate and Irish Cream Terrine! She isn't a blogger so hasn't written a reveal post but I hope she liked it!

Posted by Jules at 7:33 PM
Email ThisBlogThis!Share to TwitterShare to FacebookShare to Pinterest