Last Saturday was the long awaited hen party of the lovely Miss Jennifer Hall. Even if we say so ourselves, we thought it was surely the most ladylike and classy of all the hen parties in Manchester that evening as we started off with afternoon tea at Richmond Tea Rooms and continued partaking in many other civilised events throughout the day. 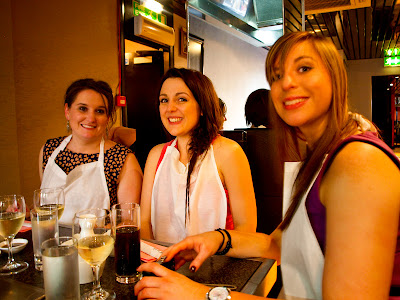 For the dinner part of the hen party we'd booked a teppanyaki table at the aptly named Teppanyaki in China Town. This place was actually a recommendation from the hen herself and I've wanted to go here for ages for a bit of traditional teppanyaki in the heart of Manchester. 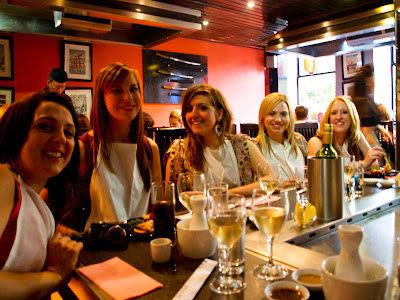 Although the restaurant had been recommended to me quite a few times, I hadn't really ever noticed the building before as I have to say it's a little lacklustre. However, we mustn't judge a book by its cover and in fact the inside is definitely an improvement and not as old school as the outside (still quite old school though)! 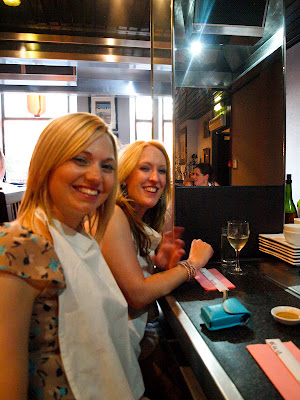 Things were very swift and efficient from the moment we arrived and we were wined / saki'd up, bibbed up and sat down at our teppanyaki table before we knew it. 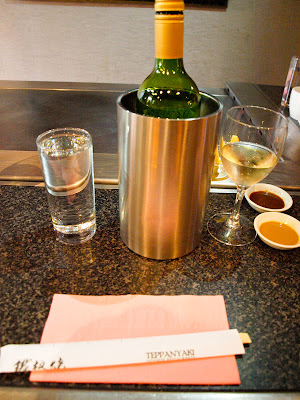 We all decided we would go for one of the Teppanyaki Set Courses as they seemed to offer a nice variety of different stuff all cooked right in front of us on the grill and good value to boot. 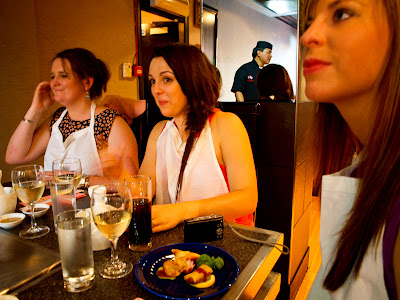 All of our set menus came with a Zensai of various little appetisers. There was a bit of confusion concerning people like me who had ordered fish but who didn't eat meat... this was sorted pretty quickly though and my meaty plate was replaced with a fishy one in time for me to tuck in with the rest of my party. 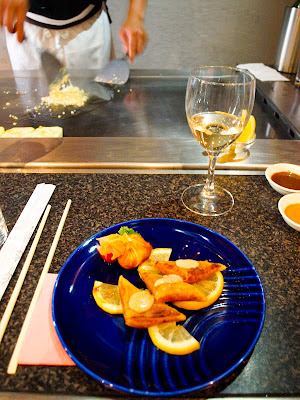 I was given some little wontons filled with what I think was surimi with a creamy sauce which were very lovely although the pastry was a little soggy on the triangular ones. They still definitely did the job of whetting my appetite ready for the main event, espeically as the chef had arrived and started frying up a load of garlic which smelled amazing. 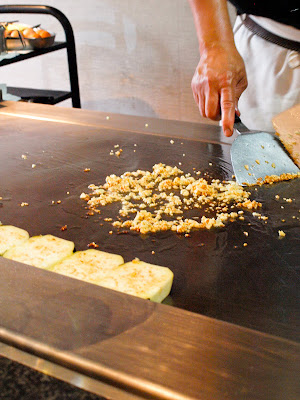 Not only had the chef started to prepare our mains right under our very noses, he'd also treated us to some mealtime theatrics including fireball making and egg juggling. Although quite entertaining (and a little bit nerve-wracking - the fire was hot!) I couldn't help comparing our chef to the very charismatic guy we'd had at Wasabisabi in Sheffield which had been a slightly more exciting experience. Wearing the bib was good fun but there wasn't any of the whole food catching in the mouth malarky so it seemed a little pointless. Still enjoyable though and I definitely found seeing what was going in my food very interesting. 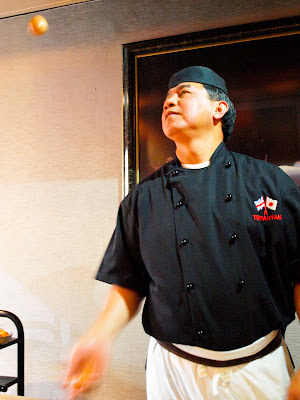 As I'd gone for the Mount Fuji menu, my main consisted of king prawns and salmon served with egg fried rice and veggies. 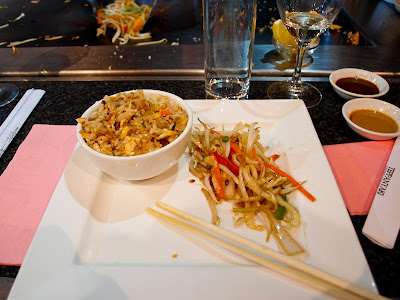 I loved seeing all our salmon cooked in front of us and this was absolutely delicious - moist, soft and slightly charred on the outside. It was especially lovely when dipped in their flavoursome soy sauce. You could tell it was a good quality bit of fish ('multi award winning' Loch Duart, apparently!) 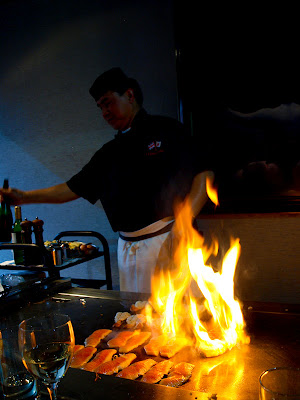 The king prawns I wasn't quite as impressed with as they were a little overdone for me and had become quite crunchy and chewy. Their flavour was still very good and they went down OK with the super tasty rice and vegetables which were both nicely cooked and well-flavoured. Once our mains were cooked, our chef was gone as quickly as he had appeared, I felt like I wished I'd made the most of watching him while he was with us! 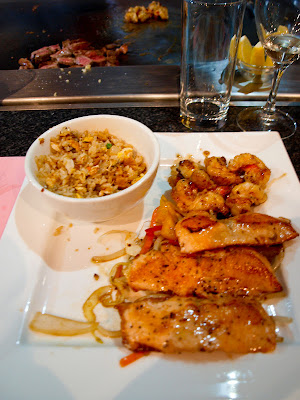 After eating our main it hit us all that we had really eaten a lot and we still had the rest of the night out to go. I thought perhaps a pot of green tea might help as a digestif, I think it perhaps did or at the very least kept me hydrated for the rest of the evening's festivities. The waitresses were very good at making sure I was kept topped up and that my teapot was full. 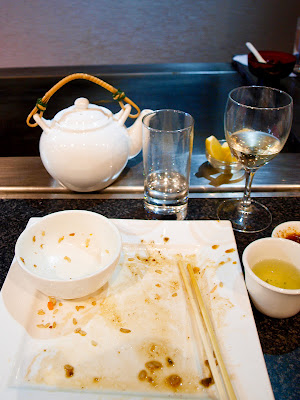 We did still have to make room for dessert, I think the waitress could see our pain as she sounded quite sympathetic when she offered it to us. I had actually moments earlier whispered to Kat "I hope it's melon", so I was overjoyed when she read out the dessert options of "Ice cream, fruit salad or melon". Usually I would quite possibly have turned my nose up at this seemingly uninspiring selection and some braver folk than I did go for the ice cream but honestly, at that moment melon was just the ticket and I couldn't have been happier to order this. 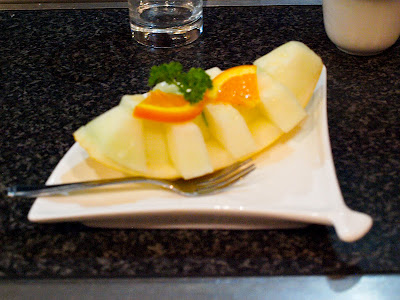 We left Teppanyaki absolutely full to bursting with food so what I would say is you get a lot of food for your money. However as soon as we stepped outside we realised that part of our lethargy was due to how hot it is inside the restaurant due to the heat of the teppanyaki plates - I really think this affected the atmosphere of the place as the general feeling was very calm and subdued rather than upbeat and exciting which is what we would have expected from the experience, particularly as we were on a hen night. I reckon if they got a bit more air circulating in there you would have a much better party atmosphere, although maybe they don't want that! 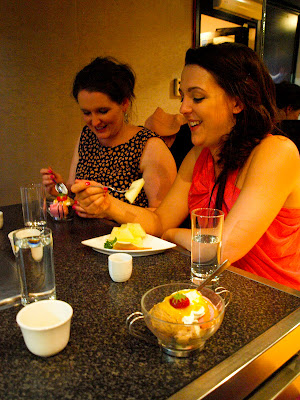 We did really have a nice time at Teppanyaki and it's a lovely meal to go to with a group of friends like we did but I think it might be a better spot for a date due to the more subdued nature of the restaurant. I couldn't help but compare it to Wasabisabi which was my other experience of this sort of evening out and would have to say this evening wasn't quite as magical. This was also partly due to the fact that the bit where our chef was cooking with us was over so quickly as he had so many other tables to get round whereas at Wasabisabi there were only two teppanyaki tables so the chef was ours for the whole service. 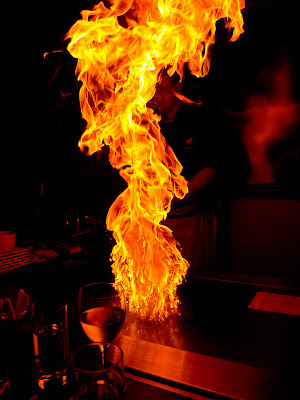 Still, I do think our meal at Teppanyaki was very good value and the food was of a high standard. There is a note on the menu explaining where all their excellent produce comes from and the quality of ingredients was reflected in the food. The service was also really good (one of the waitresses felt sort of like a knowing mum who knew exactly what you wanted all the time before even asking you) and I think I would return with Bailey so he can try the food. Although not the best teppanyaki experience I've ever had, Teppanyaki is a good restaurant and I would recommend it for lovers of Japanese food and novices alike to see your yummy dinner cooked in front of you! 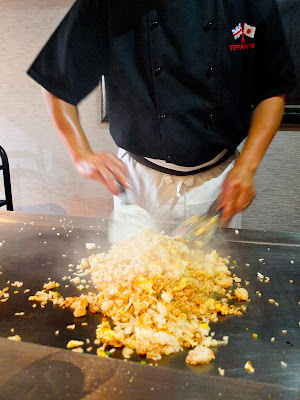