Yesterday I made one of our old favourites for dinner: Sweet potato burgers with parsnip chips. Bailey and I used to eat this meal about once a week and had gotten so sick of it that we hadn't had it for ages.

The burger recipe was invented by myself and my dear friend Jocelyn when we were living in Peru last year. Bored of the food on offer in a country whose national dishes include beef heart kebabs and roast guinea pig, we decided to try and make our own veggie burgers.

The sweet potato burger was born as we brainstormed to adapt a mushroom burger we had made earlier in the week. The dish was loved by all our international housemates meat eaters and veggies alike and is, in my opinion, really yum. 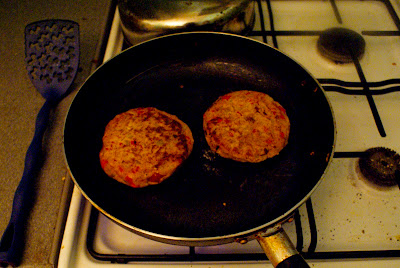 The idea to put parsnip chips with it came later during an attempt by Bailey and me to try and eat more healthily, but they do seem to go quite well with the burgers. 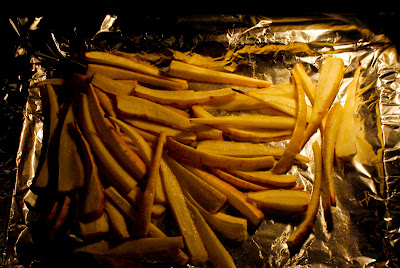 Recipe (which if you're reading this Jocelyn has probably evolved over the years I'm sorry! If I've missed out a key ingredient please do let me know) - serves 2:

For the Parsnip chips
Some parsnips
Cooking spray
Salt and pepper

Form into two burger shaped patties and fry on both sides until brown.

For the chips, cut the parsnips into chip-esque shapes. Spray them with cooking spray. Whack them in the oven at 200 degrees C until they start turning a bit brown at the edges.

Put the burgers in burger buns and serve with the parsnip chips. Goes well with salad cream but that might just be us being weird?! 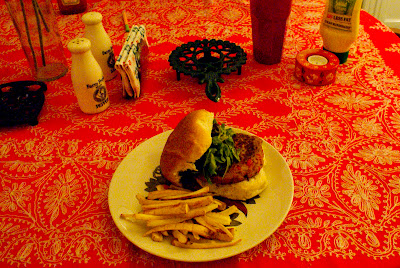 Posted by Jules at 7:16 PM
Email ThisBlogThis!Share to TwitterShare to FacebookShare to Pinterest