This morning with only 20 minutes to get ourselves a decent breakfast at 10am on a chilly Sunday, our options were limited. After a scout around town we reluctantly found ourselves in a J.D. Wetherspoons.

For any non-UK non-booze hounds who may be reading this, allow us to give you a little bit of background on these infamous purveyors of value for money intoxicants. In every town and city you will find multiple pubs brandishing the name sometimes within a stones throw of each other. These establishments vary wildly in quality both in the décor and the clientele but there are always rock bottom prices on beverages and food. Eating here is always a calculated gamble as when it’s good it’s really good and when it’s bad it’s edible. The menu is constantly changing to suit the current trends but the standard fare consists of burgers, pies, sausages, fish n’ chips, pastas, salads and a fair stab at decent veggie options. The environment is also quite an oddity in English pubs as music is banned making it a desirable location for old people morning, noon and night.

On this fine morning the deciding factor was a sign stating that the menu was changing so free samples would be distributed… and the fact that nowhere else was open. Free samples were delivered in the form of pancakes with ‘maple flavoured’ syrup and a bit of bacon. The pancakes themselves looked like miniature USA pancakes but were quite heavy and a bit chewy while the ‘maple flavoured’ syrup was just that, a light treacle syrup with just a hint of maple. Tasted much better for being free. 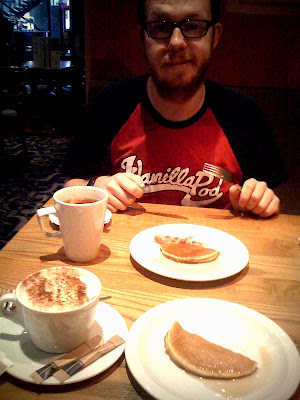 On to the main event and Jules had gone for the healthy option of porridge with a blueberry compote. What arrived was in fact a creamy porridge with strawberry jam so not quite as advertised but still tasty. I ordered the veggie brekkie which was cooked to perfection (shouldn’t be hard) and consisted of two fried eggs (not too greasy), three hash browns (tastier than a hash brown should be), one veggie Lincolnshire sausage (used to be quorn, now they taste of something), baked beans (standard), a portabello mushroom (cracking) and half a fried tomato (jettisoned to the toast plate). We ordered toast on top of this and were surprised to receive four perfectly toasted slices of poppy seed bloomer bread which was fancier than expected. All of this cost six quid including a mug of tea and a cappuccino so top notch value. 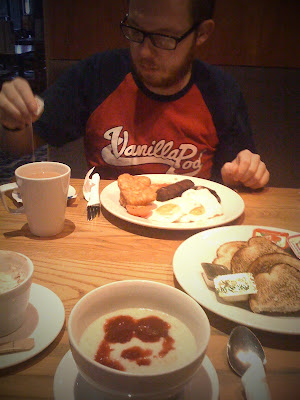 We would always recommend Wetherspoons pubs as you usually get friendly service, sometimes get great food but at worst you always get at least what you pay for.
Posted by Bailey at 1:17 PM
Email ThisBlogThis!Share to TwitterShare to FacebookShare to Pinterest