What's one to do when one has TWO pumpkins? 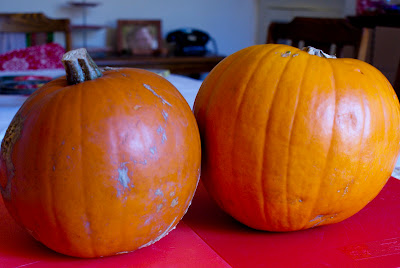 Today I found myself in this situation and decided I would carve one of them up and make a meal out of it. However, Bailey had warned me in no uncertain terms that he does not like pumpkin at all, so I had to think on my feet to create a dish that he would like even if it was full of pumpkin. So I thought, who in their right mind doesn't like lasagne? And that's how pumpkin lasagne was born.


Before I begin I must note that before today I had never carved a pumpkin in my entire life (sad, I know). I had no idea what to expect and thought it would be really difficult to break through the skin. It in fact required a lot less elbow grease than I thought and the lid part came off dead easy. 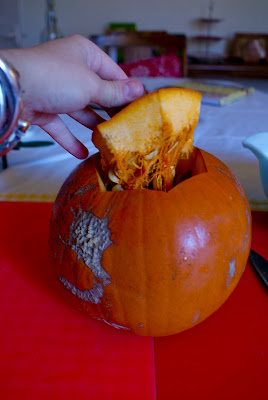 Unfortunately, these previous assumptions meant I was so heavy handed while carving the face, that I accidentally made our pumpkin's nose cave in, earning it the nickname "Westbrook". 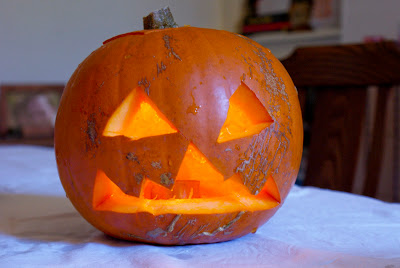 Using the ingredients I had knocking about in my fridge, including cream cheese, sage leaves, bavarian smoked cheese and parmesan, I came up with this recipe for pumpkin lasagna. It looked, smelled and tasted delicious and Bailey ate it all up, had seconds and, I quote, said: "This is the kind of meal you'd really enjoy in a vegetarian café". So there you have it, a pumpkin lasagne suitable for even haters of pumpkin. 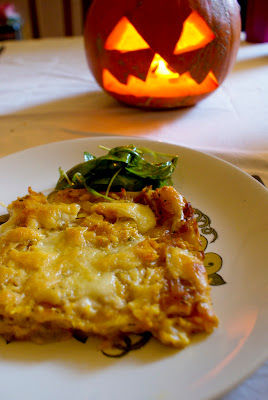 Recipe (sorry, I wasn't really measuring any ingredients out as I was making it up as I went along):
1 small pumpkin, carved
5 sage leaves
Rosemary
Butter
About a quarter of a pint of vegetable stock
1 onion chopped
1 yellow bell pepper chopped
Half a tablespoon light brown sugar
Two tablespoons plain flour
Half a tub of cream cheese
Bavarian smoked cheese (or any other cheese you may have... this wouldn't have really been my first cheese choice)
Grated parmesan cheese
A few pinches of nutmeg
Milk
Lasagne sheets
1 block of mozzarella cheese
Salt and pepper

Chop up the pumpkin flesh. Add one knob of butter to a frying pan and fry the sage leaves, before adding the pumpkin and a few pinches of rosemary, salt and pepper and frying for several minutes until soft. Gradually add the stock to the frying pan and stirring in until nice and saucy. Take the pumpkin out of the pan and blend up a bit. To the same pan add another knob of butter and melt. Add the chopped onion and fry for a few minutes before adding the sugar and allowing to caramelise. Add the peppers and cook for a few minutes longer. Add the pumpkin sauce back into the pan and cook for around 5 minutes.
In a saucepan melt another knob of butter and add the flour to make a little buttery flour ball. Gradually add milk and boiling water until you have made a béchamel sauce. Add the cream cheese and the other cheeses until you have a fairly thick cheese sauce. Add the nutmeg. Take an oven dish. Add a layer of the pumpkin sauce to the bottom, followed by a layer of the cheese sauce, followed by a layer of lasagne sheets. 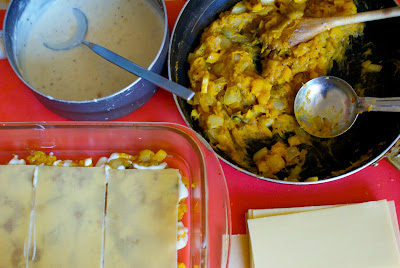 Repeat the process until you have run out of the sauces. Bake in the oven at 150 degrees C for about 40 minutes. Take out of the oven and add a shredded block of mozzarella to the top. Turn the oven up to 175 degrees. Cook until the cheese on top is golden brown and serve. 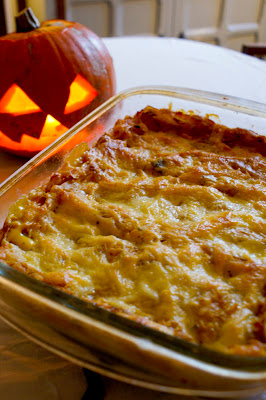 Posted by Jules at 8:14 PM
Email ThisBlogThis!Share to TwitterShare to FacebookShare to Pinterest