Since Bailey bought me my Cupcakes from the Primrose Bakery book for Christmas, I have been baking at every opportunity. However, last week when I didn't have time to make cakes for Blob and Aimee's visit, Bailey decided he would take the baking into his own hands. As it turns out, the caramel cupcakes he decided to make were a huge hit, not only with us but all the colleagues in his office.

So tonight Bailey decided to step up his game and try out Carrot Cupcakes with an orange cream cheese icing. It's the first time we'd made these and we were a bit unsure as to how they were going to turn out, given that they were so different to the other cakes we had made from the book - mainly due to the absence of huge amounts of butter. Also once the ingredients were all prepared Bailey was surprised at how very much carrot was actually in there. And it seemed unlikely to rise given that once ready the mixture seemed like a liquid gloopy mess! 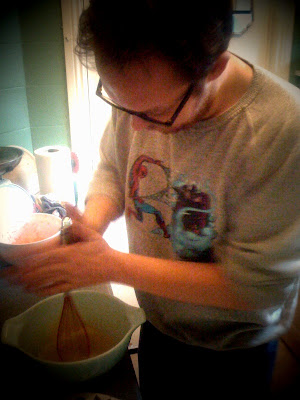 However, thanks in part we think, to our new fancy deep muffin tins and muffin cases from Asda, these came out as probably the best cupcakes we have made yet! 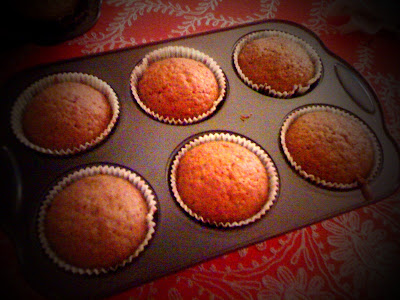 We were also slightly concerned about the cream cheese icing because it was a lot gloopier than it normally comes out, but after an hour's stint in the fridge it seemed ok and iced quite well. Oh and absolutely delicious. In fact we are both feeling quite sick from licking out the bowl.

Anyway, just a sprinkle of cinnamon and voila! 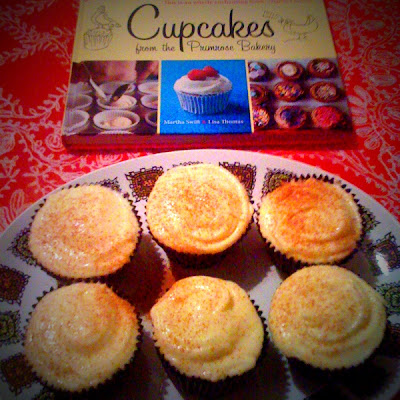 Bailey is definitely becoming the master baker of the house, I think I am going to have to retaliate soon...

Stick the oven on 180 degrees C. Grate the carrots. Mix the eggs and sugar for five minutes then add the oil, vanilla and orange zest before beating well. Sift the flour, bicarb of soda, salt and cinnamon into another bowl. Mix them up before gradually adding to the egg and sugar, beating well all the time. Put the carrots in with the batter and mix with a wooden spoon. Spoon the mixture into the cupcake cases generously until two-thirds full. Bake in the oven for about 25 minutes. Don't worry if they look quite dark, they're meant to be like that.

For the icing, stick all in the ingredients in a bowl and mix them until there are no lumps. Put in the fridge for an hour before icing.

Posted by Jules at 9:55 PM
Email ThisBlogThis!Share to TwitterShare to FacebookShare to Pinterest