Having had and loved my Primrose Bakery Book for some time now, I always feel bad that I've barely baked anything from it. Ever since I bought it the recipe for Lamingtons keeps catching my greedy little eye. 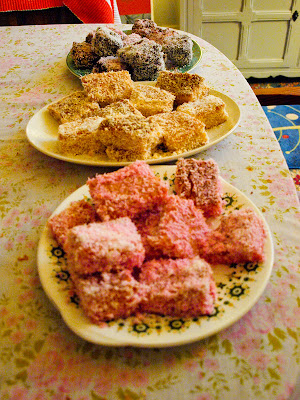 I'd never actually heard of Lamingtons but they looked so adorable. Apparently they're a very popular Australian treat and sounded so yummy - moist sponge covered in chocolate or flavoured jelly. Very unusual! 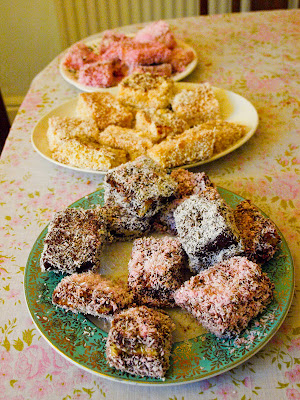 The perfect opportunity for Lamington-making arose when I was deciding what to send to my Foodie Penpal for March. I needed a treat that was yummy enough for a cake lover but also that could survive being thrown around by Royal Mail. As Lamingtons are protected by a lovely layer of topping plus dessicated coconut I thought they'd be great! 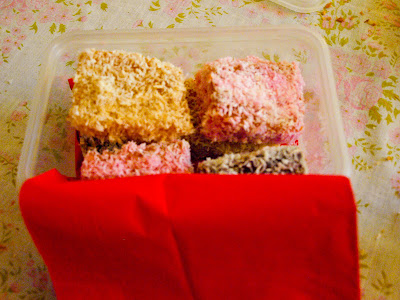 Another potential problem I had to think about was whether or not the Lamingtons would arrive nice and fresh to their recipient. I remembered the wonderful Pastry King giving a tip on how to make cakes last longer when we saw him do his baking demo at Cheshire Cookery School Clandestine Cake Club meet. I tweeted him and he told me I needed to substitute 15% of the recipe's butter for oil and to add a dash of glucose to my topping. Lovely stuff. Cheers Pastry King! 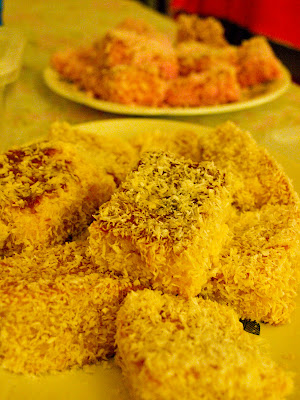 The Lamingtons came out very lovely. Not only did I send a box off to my Foodie Penpal, I took some into work as did Bailey and the Morrises also got a couple of squares. Everyone was very impressed, my friend Iain ate two during a meeting at school about diabetes saying "I couldn't help it, they were so tasty." Unfortunately they weren't very pretty as the mixture sunk a bit due to me being an idiot and putting 100g too much sugar in (the recipe below is the CORRECT one!) I sort of got away with it by keeping different sized and wonky Lamingtons away from each other. Good stuff. 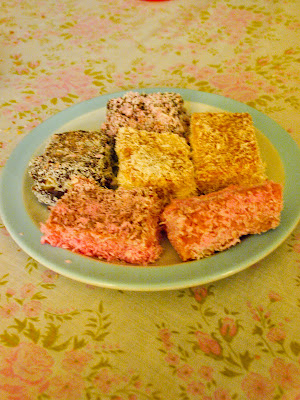 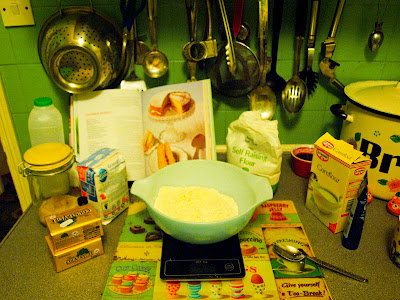 Start by preheating the oven to ??????? degrees C. Sift the flours, baking powder and sugar together. Gradually add the vanilla essence and oil, beating in slowly. 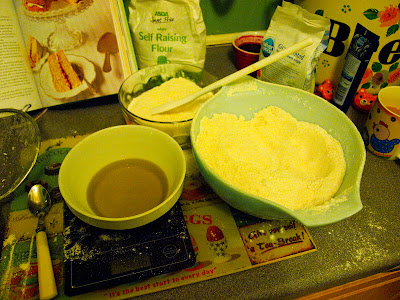 Beat the eggs in one at a time. 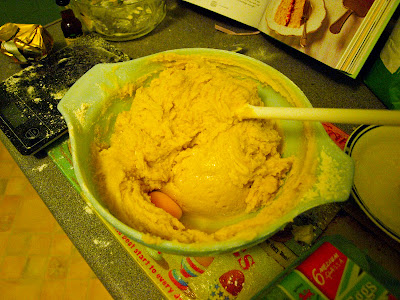 Add the milk and beat well until you have a nice, smooth batter. 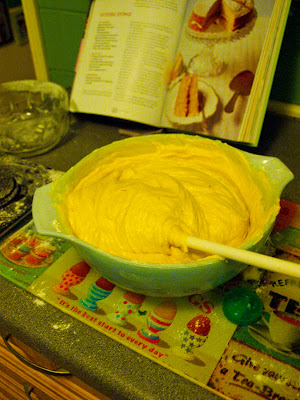 Line a rectangular baking tray with greaseproof paper. Spray with cooking spray and pour half of the cake batter into the tin. 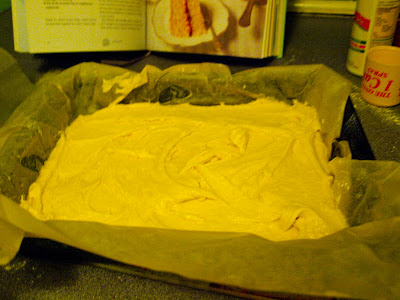 Bake in the oven for ?????? minutes or until the sponge is golden brown and a skewer comes out of the cake clean. Remove the sponge from the tray and repeat the process with the second batch of batter. Once the sponges have cooled, slice the edges off the sponge so you have even sized and textured rectangles of sponge. The excess cake can be eaten (which is what we did) but could also be kept for making Cake Pops (this is what we thought of afterwards and wished we had done). 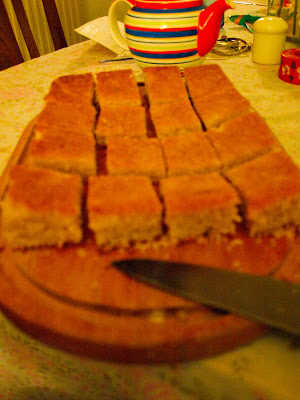 Prepare two bowls with the different flavoured jelly powders. Add the boiling water and stir well. Add the cold water and glucose to each before leaving to thicken in the fridge for a little while but do not allow to fully set. 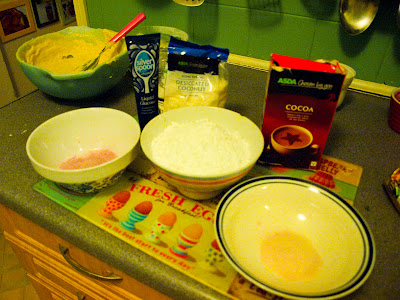 Meanwhile, prepare the topping for the Chocolate Lamingtons. Melt the butter down in a saucepan before adding the cocoa powder, water, glucose and vanilla extract. 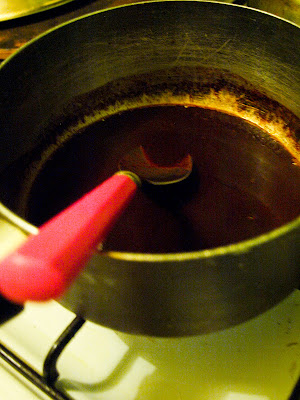 Add the icing sugar and stir to make a thick chocolate sauce. You will need to work with this straight away otherwise it goes too stiff to dip the sponge into. It's no big deal if you have to heat it up again - I did about three times! 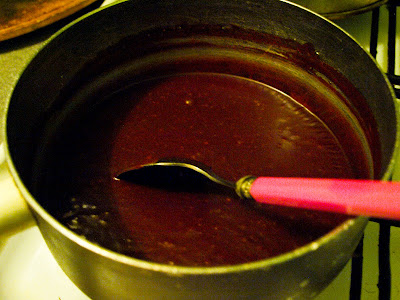 Get your squares of sponge and your toppings ready, as well as a plate with the dessicated coconut on it and you can start rolling! 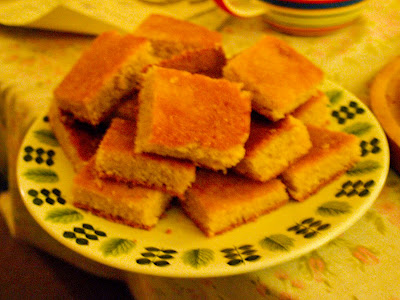 Dip the sponge squares into the jellies and the chocolate sauce carefully before rolling in the dessicated coconut and transferring to a plate. Leave to cool, preferably in the fridge and for a good few hours. Be careful not to let the jelly stick to the plate like I did! It will make your Lamingtons look quite messy. 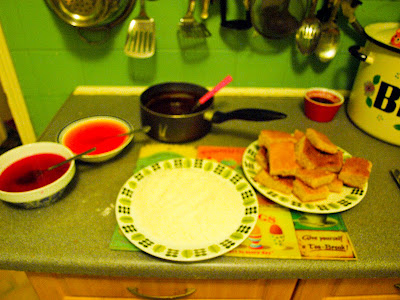 Serve up your colourful Lamingtons for a lovely treat! 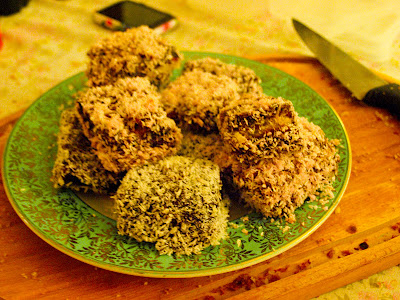 Posted by Jules at 6:11 PM
Email ThisBlogThis!Share to TwitterShare to FacebookShare to Pinterest