When you name your pub/restaurant after someone you've gotta go for someone worthy of such an honour. Nobody wants to eat Sunday lunch in "The Jim Davidson", nibble on a Caesar salad at "The John Terry", sip a trendy cocktail in an upmarket bar called "Bono" and there are few human souls who want to sink a pint in "The Adrian Chiles". So when I heard of the establishment The Mark Addy I have to admit that my first thought was to question whether or not the actor who portrays King Robert Baratheon in HBO's Game Of Thrones was up to scratch but then I remembered he also played Fred Flintstone in "The Flintstones in Viva Las Vegas"!  Yes that must be it I thought, the clincher that inspired somebody to renovate and reopen a canal side Manchester restaurant and pub!  I was incorrect, The Mark Addy is in fact named after 19th century local resident Mark Addy who saved over 50 people from drowning in the highly polluted River Irwell.  Fair enough he wasn't in The Full Monty but he did receive The Albert Medal so hopefully we can all agree this is a well named eaterie. 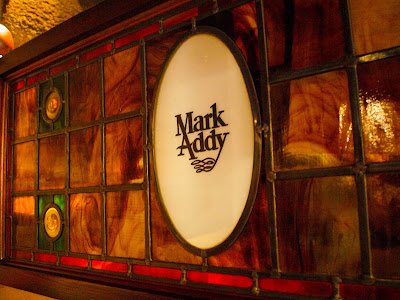 We visited The Mark Addy as part of our ongoing Pay Day Steak Day tradition but not only due to that, it had also come highly recommended to us from various foodie folk on Twitter and in person so it was already on THE LIST.  Therefore we were really excited about this visit.  We were also sold on the location, you don't get much more riverside than this place!  Descending the stairs down to the water level you are greeted with a  phenomenal whiff of ales and roast vegetables and gravy and meats and what can only be collectively described as 'pub musk'.  Best smelling pub/restaurant in Manchester?  Definitely.  The pub itself is an absolute beaut, filled with dark wood, a tremendous bar, a very open kitchen and supplemented by nice internal lighting as well as lovely natural lighting bouncing in off the river.  Loved it. 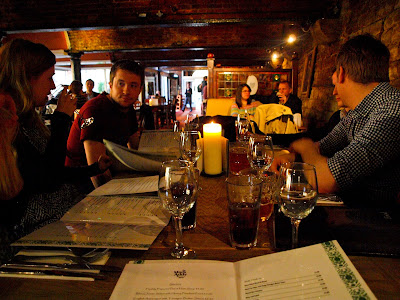 Now unsurprisingly they do have a whacking great selection of great beers.  Sadly my first pint was so tasty I stuck with it for the rest of the night  The ginger pale ale I had selected had the curious but not unpleasant effect of building up a little bit of heat on the old palate after each successive pint.  Also worth mentioning that they had a respectable whisky line up (always useful to indulge in the final stages of the PDSD tradition) and that the service was friendly and professional despite the fact we were being awkward and annoying at the bar - "Are we adding these drinks to the tab?" "No I'll pay for my own drinks" "Can I pay by card for some of these drinks?" "We've changed our mind, stick everything on the table" "I've already paid for mine with cash" "blah blah blah".  Sorry about that Mark Addy. 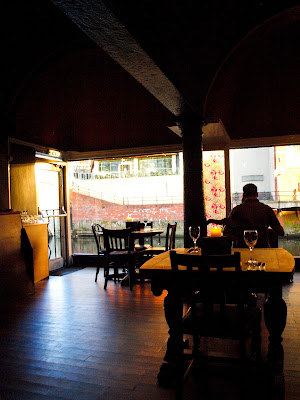 There was one more reason to pay a visit to The Mark Addy and that reason came in the shape of an egg, an egg made of black pudding and sausage and a pickled egg.  Yes they were purveyors of the fabled Manchester Egg.  I had never tried it before and so was very excited, I had planned to order one at the bar so I could shove it in my face before we were even seated.  In the panic at the bar I didn't get my chance to strike and so waited until we were asked to order our starters.  I struck, I was denied!  They had just sold the last one.  As I sank in to a deep depression I regrettably passed on the opportunity to order a starter but others went for the Blacksticks Blue Cheese Bhaji, they were fist sized, they smelled amazing, my nose slid off my face freshly cut.  Still managed to snag a fork full, they were brilliant. 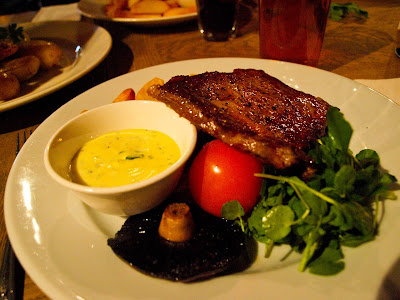 The steak eaters went for the rib eye, medium rare X 4 (we must be popular with waiters and chefs alike) and I have to say they were pretty solid steaks.  Really tasty with plenty of seasoning, you could actually see the seasoning on the steak which is something that would normally worry me (why are they trying to hide the flavour of the steak?) but the steak was not lost at all.  The chips were top drawer, I might go as far as to say they were perfect, I would definitely go as far as to say that they single handidly justify a trip to The Mark Addy.  In the Manchester steak rankings it's up there but still lagging behind the crap restaurant with great steaks SMOAK.  Besides the great steaks I can also confirm that Jules very much enjoyed her salmon dish, particularly the potatoes on the side.  There was nothing revolutionary about it but it was simple, very well cooked food. 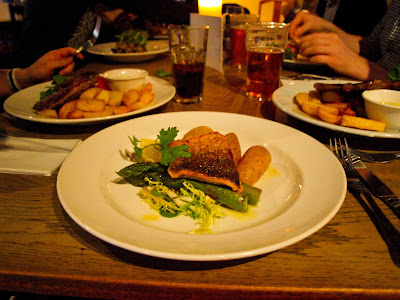 Desserts were forgone by half of the table in favour of the traditional whisky.  I went for the Suntory Yamazaki 12 year which gave an intense but not unpleasant punch. Desserts were eaten by the infidels though.  Jules went for the Eccles cakes with cheese.  It should be renamed cheese with Eccles cakes.  Look at those wedges.  Some absolutely banging cheese here and a great combo with the Eccles cakes, some people might be a little bit intimidated by the cheese stack though.  We didn't leave any cheese behind I can assure you of that. 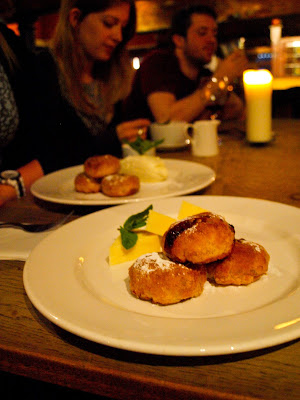 I do have to highlight just one little bug bear that I think is becoming something along the lines of an OCD for me.  The Mark Addy is a beautiful pub, it is a sight to behold honestly.  So why after going to all that trouble to make the environment brilliant would you leave boxes of restaurant consumables out in plain sight both in the restaurant and in the stairwell?  Surely it's a five minute job to shove them somewhere else and it stops punters being distracted from the obvious beauty and individuality of your restaurant?  Gripe over.

I will be returning to The Mark Addy because I loved it.  The service was fantastic throughout, really genuinely chatty and friendly as well as being perfectly suited to the place itself.  The food was great, outstanding in places in fact and refreshingly, unashamedly British.  It goes back on the very short list entitled, WOULD LIKE TO COME REGULARLY.  Now in the meantime would anybody like to invest in my new wine bar?  I'm going to call it "The Chris Moyles". 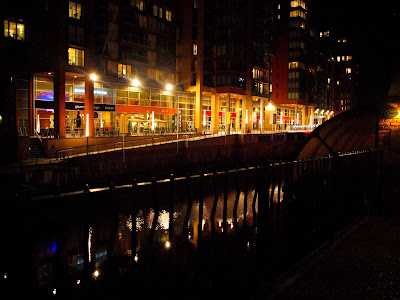 Posted by Bailey at 4:32 PM
Email ThisBlogThis!Share to TwitterShare to FacebookShare to Pinterest