Just as we were getting ourselves all excited for our holiday to Chania, we heard that my number one favourite chef Yotam Ottolenghi was in Crete himself, eating and cooking a load of grub for his new TV show. I tweeted him immediately: "How long will you be there for? If I spotted you it would make my holiday." A few hours later, Bailey shouted down the stairs to tell me "Ottolenghi has tweeted you back!!" ...After recovering from this excitement, I was sad to see that Yotam was only in Crete for a week so I would miss the opportunity to become his best friend, however the good news was that he was making recommendations left, right and centre. We made a list of Cretan specialities we needed to try but were also delighted to see that he had suggested Thalassino Ageri (an "unequivocal recommendation") which was actually already on our list thanks to our fellow blogger and Crete expert, Bacon on the Beech (clearly a man of taste!). 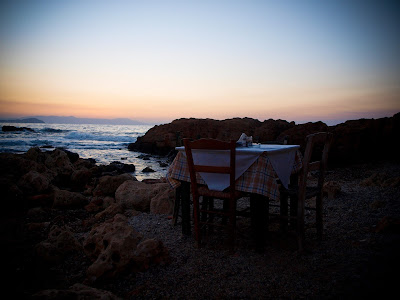 Thalassino Ageri was a wonderful recommendation. First of all: the setting. This was hands down the most beautiful location for dinner we've ever had. The rustic restaurant, which used to be a tannery, boasts its own private 'bay' at the foot of a mini cliff - you really do feel like you're in the middle of nowhere with the waves lapping almost at your toes. A great place to be when the sun is setting! 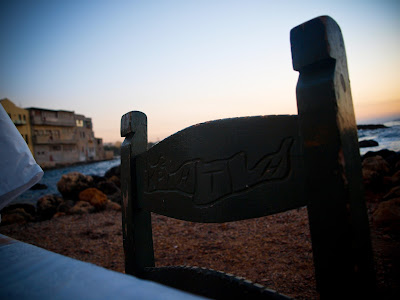 Secondly: the menu. Specialist seafood restaurants are much less common than you'd expect in Chania. In Crete there are strict summertime fishing quotas which meant that seafood options were limited in most of the restaurants we visited. Thalassino Ageri's menu on the other hand was packed with fish. Obviously this meant that the prices were a little higher, but unlike some of the kvetches on TripAdvisor, we don't mind budgeting a little extra for a good quality meal. Nor, it seems, do the locals, as the place was packed with them with barely a tourist in sight. 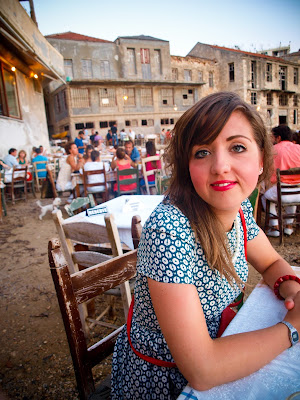 Thirdly, the atmosphere - the service was relaxed and friendly and fitted well with the homely feeling of the entire experience. Everyone there seemed to be having a good time and there was a good bit of hustle and bustle, while at the same time our table felt totally private - very 'romantic'! 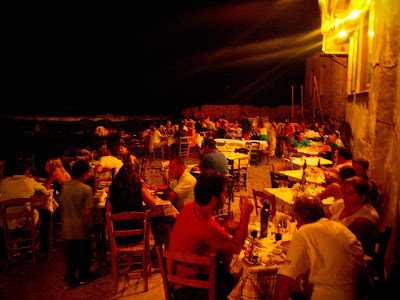 Finally, the important matter of the food and drink! We started with a bottle of local Boutari wine as recommended by Mr Bacon - fresh and crisp, which is exactly what you want when you've got a sea spray flying into your face and a seafood banquet on its way. 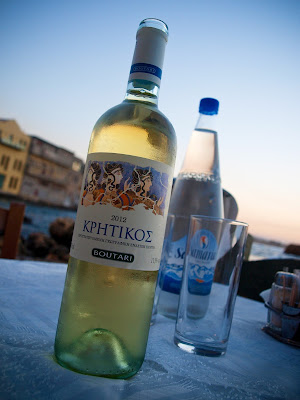 We were really excited about trying different things off the menu and as a result over-ordered somewhat. Considering we were brought out a large portion of beautiful toasted bread drizzled with gorgeous light Cretan olive oil with our appetisers we ended up with a lot of food to contend with! 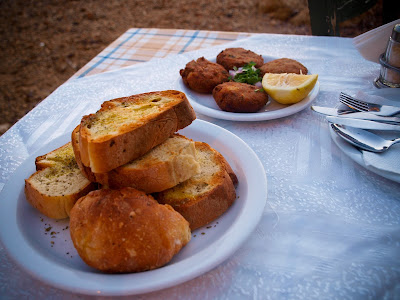 We couldn't get enough of the Dakos salads we'd been eating since arriving in Crete so had to get one of those. This was tasty with lots of fresh, thinly sliced salad veggies atop the crunchy rusks but not as exciting as some of the others we'd eaten. 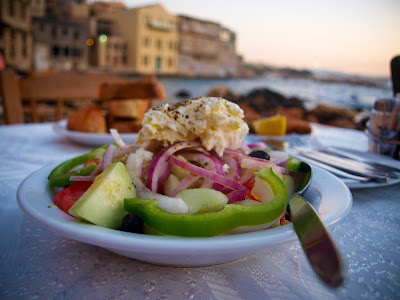 Fried Fishballs with Codfish were a winner, more like soft fish cakes than the crispy balls we were expecting but still great. 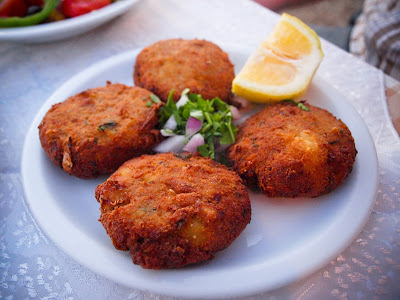 It was also time for us to lose our cuttlefish virginity. Having since looked up cuttlefish on Google Images I can confirm that this isn't the best looking of fishies but it looked as pretty as a picture on my plate and tasted divine. We loved the crunchy onions on both of these dishes which were much more than just a garnish. 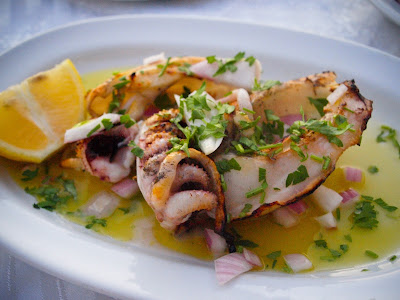 Slightly concerned at this point that we were already pretty full, we soldiered on with our mains. Bailey chose the Grilled Swordfish. The accompanying chips were very lightly fried but still crispy and cooked through in the middle. A fine example of great Greek chips which we came to love on this holiday. 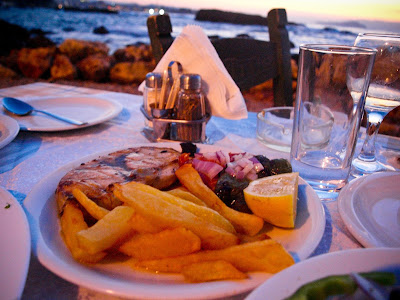 I had sea bream from the "first class fish" section of the menu. What we loved about both of these plates of food was the simplicity of the cooking - the quality of the fish shining through. We loved the soft, charred peppers that came on the side with a nice barbecue flavour to them. Also, featuring heavily on both of these mains as well as my cuttlefish was more of that wonderful Cretan olive oil which had a fantastic flavour and never felt sickly. 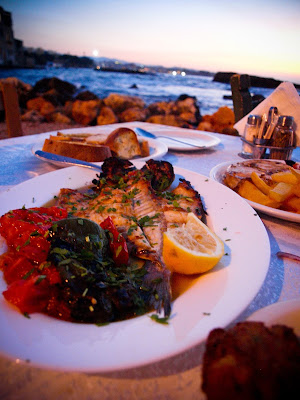 By the time we'd finished eating, the sun was well and truly down at which point we would have liked a candle but given that this was our only complaint we're doing pretty well! The post-meal entertainment of feeding the local stray cats our leftovers was a bit of a treat, not sure if we were supposed to do that though... 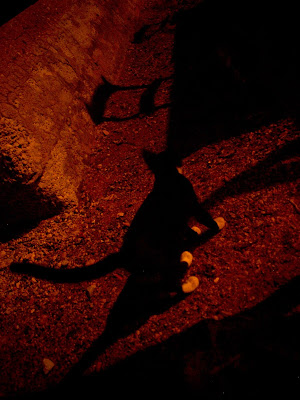 The final thing we noticed that was a little different about Thalassino Ageri was that we weren't automatically brought out the customary complimentary raki after the meal. That said, when it was offered to us and we declined, our kind waiter looked rather surprised. We hope we didn't offend! We are happy to report that Ottolenghi/Bacon's recommendation was an absolute hit in our book and we will remember that sunset for a long time. Not only is Thalassino Ageri's bay 100% the most romantic setting for a meal we've ever seen, the food was prepared with love and was well worth the walk from Chania. We look forward to seeing it on the telly and reliving the experience when Yotam's new show comes out! 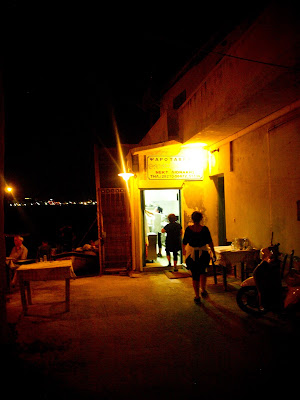 Posted by Jules at 3:35 PM
Email ThisBlogThis!Share to TwitterShare to FacebookShare to Pinterest