It was the Sunday of our family weekend in Paris and we were after a delightful lunch spot on the Île Saint-Louis. We really had no idea. Normally when Bailey and I find ourselves in this situation on holiday we follow our noses to whatever looks like the most popular, least touristy local eatery, however it didn't seem fair to do this while carting the family around who, unlike us, don't spend their entire lives thinking about where their next meal is coming from. I tried my usual first port of call Twitter, but to no avail. Our guidebook wasn't much help either. Finally I did something I don't normally do and took to Trip Advisor, an activity of which I am usually very untrusting indeed. 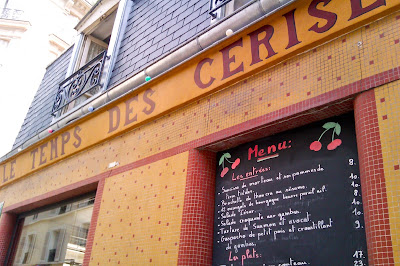 Well this time Trip Advisor played a bloody blinder as the little gem we discovered, Le Temps des Cerises, was an incredibly cute, family run, honest little bistro. It is a little off the beaten track; it isn't actually on the Île Saint-Louis and not as picturesque a location by any stretch of the imagination but at least this meant the place wasn't packed full of tourists. 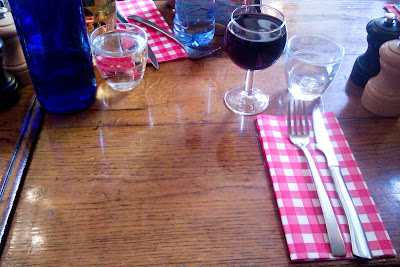 I decided to treat myself to a nice glass of house red as a Sunday in Paris treat and was very pleasantly surprised by the wine I was presented with. A good start. The waitress then came to take our food order and was extremely lovely and very patient when faced with a number of confused people speaking to her about the menu in three different languages. 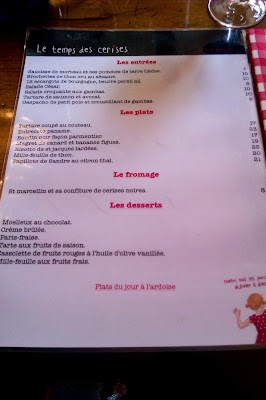 Once we'd all deciphered/translated the menu, we were able to establish that Le Temps des Cerises had on offer a great variety of traditional French dishes with some great sounding modern twists. I chose the Mille-Feuille de Thon - an intriguing sounding tuna version of the French pastry classic. 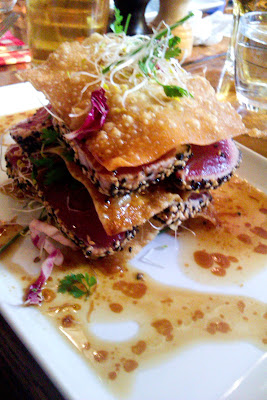 This was a beautiful plate of food - huge slices of luscious pink tuna served in between crunchy deep fried 'feuilles'. A smattering of sesame seeds, some sprouts and an amazing salty savoury sauce and I'm thinking this is surely one of the best Sunday lunches I've ever had the pleasure of shovelling down my neck. 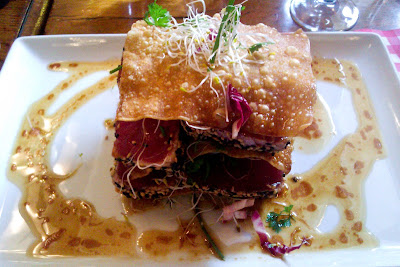 My fellow diners were also very pleased with their food. My dad didn't stop raving about his Papillote de Sandre (pike-perch?!) au Citron Thai, Auntie Ruth stated the duck was the best she'd ever had and my mum was so impressed with her Risotto de St Jacques Lardées.

Bailey ordered L'Entrecôte Paname which he described as "brilliant". The steak was such a good quality piece of meat they'd have gotten away with doing nothing to it, however it was served with a delicious shallot sauce and perfect chips. 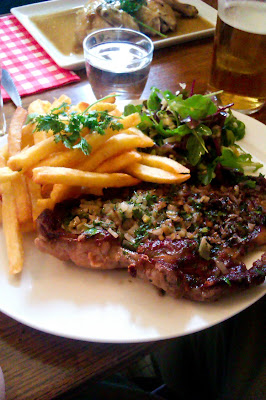 This charming little eatery was a cracking find and we really enjoyed our experience right down to the bowls of cherries they had out on the bar to match their name (no seriously this was actually really exciting for my auntie who isn't used to seeing fresh cherries in Colombia, only the cocktail or glacé type ones). Although not wanting to take anything away from our also very good meal the day before, we were all in agreement that this was our favourite restaurant of the weekend. Le Temps de Cerises gets my much coveted (*ahem*) seal of approval; in fact, the only downside about it is that I'm having to eat my words about Trip Advisor being a load of shite. Tant pis! 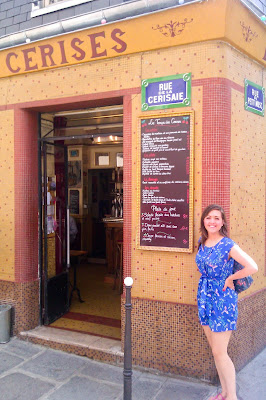 Posted by Jules at 5:52 PM
Email ThisBlogThis!Share to TwitterShare to FacebookShare to Pinterest