We tend to go with personal recomendations over reviews every time and Bacoa of Barcelona was no exception as once again Jules' bro supplied an expert tipoff.  This place is widely regarded by locals as 'the best burger in Barcelona'.  Much like all the good places in Barcelona it's tucked away and takes a little bit of finding. 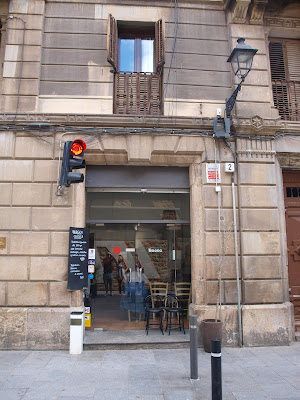 We did attempt to visit it on the very first night we landed but there was no chance as it was so busy that from the doorway we can only see a mangled mass of limbs and burger meat, a nightmarish vision.  Also they don't do any veggie options which would have left Jules out in the cold somewhat.  We would have to wait for one of the very rare moments when I was hungry but Jules was not.

We were happy to find that on the 2nd attempt we managed to slip in and grab a table.  While we waited in the queue and translated the menu board the burger flipper (who acted very much like he was the owner) made a real concerted effort to say hello, he was very friendly and forthcoming. 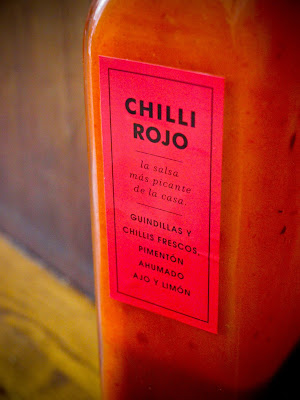 The interior of the restaurant is pretty simple and they do manage to cram plenty of seats in without making you feel cramped.  Like the decor the menu is very simple serving only burgers and a limited selection of sides (wedges and salads) but you can customise your burger to high Heaven so you get exactly what you want.  On the table you are going to get classic ketchup, vinaigrette dressing and a very pleaseing chilli rojo sauce.  The chilli sauce warns that its the hottest sauce they do but any fans of heat can happily slosh it on I reckon.  Either way it has a beautiful smoky flavour to it and is the only sauce you'll need to apply to those wedges. 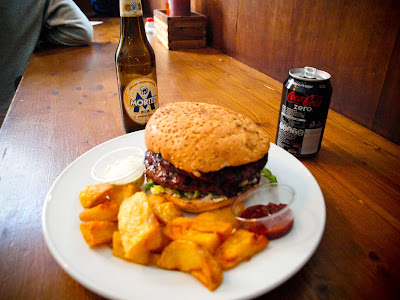 I went for the 'Bacoa Burger' which consists of two slightly thinner patties with manchego, caramelised onions, bacon, lettuce, tomato and onion served in a perfect sesame seed bun.  The bun was an absolute 10/10, crispy on the outside for the duration of the burger munching but still absorbed all of the sauces and juices never allowing any of the toppings to escape. 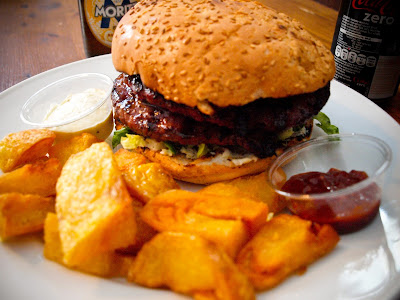 The burgers were just cooked through, there was only a scrap of pinkness to them and this was probably due to the fact I went with the thinner patties, I'm sure the bigger ones have the full on rare pink in the middle.  This didn't mean it wasn't moist though, it had a pleasing texture throughout and wasn't dry at all.  Flavour wise this is all about the beef which tasted amazing, toppings were used sparingly to make sure that you weren't distracted.  That said I could have eaten a pile of that bacon as big as my own head, again super meaty but with a real charcoal flavour running through it.  When people say that somethings been flame grilled this is exactly the kind of flavour you hope for.  These burgers are the closest partner to Manchester's own Barnhouse Bistro as they too are moreish without any feeling of greasiness. 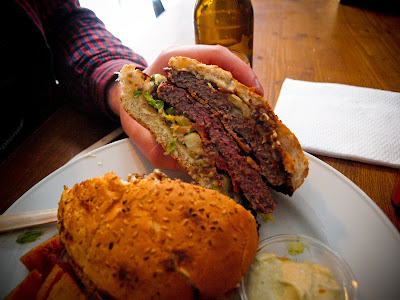 This was a bargain at less than 8 euros especially when accompanied by super chunky patatas fritas.  These bad boys were super crunchy and mega thick served with homemade mayo and chutney.  Stick a bottle of Bier Moritz on and you are still under 10 euros and you have a fantastic burger, mega filling and tasty wedges accompanied by a super cold classy beer. 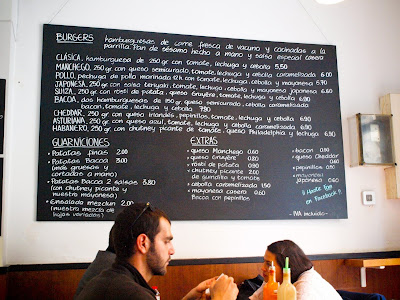 As we were leaving we noted that the two owners were still working non stop to ensure the burgers were flying out, with that in mind we decided to leave them be and walk out the door.  "MUCHAS GRACIAS" came the bellow from the grill.  Even when they were taking so much care with their food they still insisted on greeting and bidding adieu to every customer.  Please make sure you go and say hello to them if you ever find yourself in Barcelona.

Posted by Bailey at 8:54 PM
Email ThisBlogThis!Share to TwitterShare to FacebookShare to Pinterest