By far my least favourite times of the year are those 6 dreadful Sundays when I'm preparing myself, mentally and physically, for going back to school after the holidays. I'm sure every teacher will agree but I bet none of them will be able to fully explain why. It is weird because even though I'm relatively new to the profession, even I already know that there's no need to feel so bad about it, that by 10:15am on the Monday you already feel as if you'd never been away... Even so, it's very difficult to escape the feeling of dread and my dad told me that even after 40 years of teaching, it never goes away. 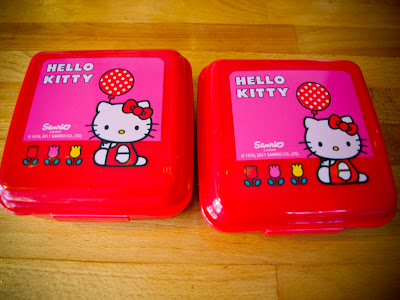 I've realised that the best way to deal with it is to make sure you've got any work out of the way so that the last Sunday can be spent relaxing, doing things you love and basically distracting yourself. This time I decided to give myself a reason to look forward to going to work. I texted my fellow teacher friend Hayley and told her not to bring in a packed lunch, that she was getting a bento brought in by me. 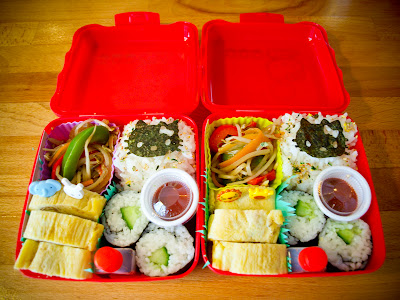 I decided to try out making a variation on the Tamagoyaki recipe out of The Just Bento Cookbook and I also remembered Hayley telling me how much she loved Cucumber Maki so I whipped a roll of those out too.

This was my second attempt at making Tamagoyaki; the first time I'd done it I'd been reassured by Makiko's words in the cookbook "Don't despair if your tamagoyaki doesn't quite look perfect. It will still taste great!" (it didn't look perfect. It did still taste great). This second time it was a lot easier and looked loads nicer so I'm sure the third time I attempt the tamagoyaki it will be ace.

The bentos turned out lovely, despite initial fears that I'd overdone it with the wasabi in the maki rolls (Bailey ate one and cried out in pain before slamming his fist on the table. Oops), they seemed to mellow overnight and were fine. Phew! I really liked the last minute addition of some Sriracha sauce which I only did to fill up a space but was the perfect partner to the Tamagoyaki. I also used more of the lovely bento accessories given to me by Tokyo Purple Girl, even including these adorable hand towels! 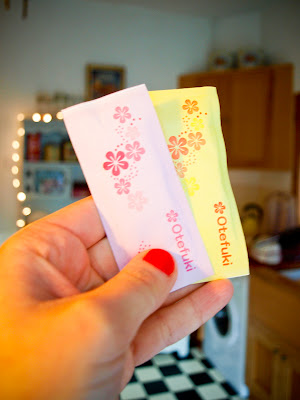 Hayley was dead pleased and said her bento was "a delight" and the excitement of giving someone else a lunch treat certainly did make doing back to school a much less terrible experience. Oh wait, it's never as terrible as you think anyway... Try telling me that after the next holidays and I will bite your head clean off. 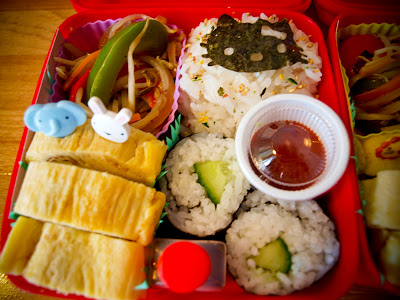 Crack the eggs into a bowl and whisk in the Splenda. 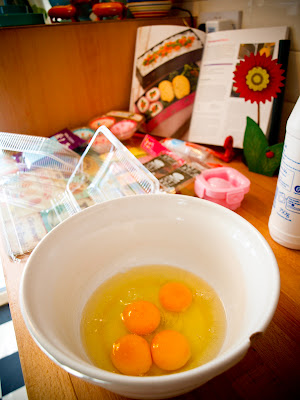 Whisk in the mirin, salt, pepper and soy sauce. Meanwhile, spray a frying pan with the cooking spray and heat the pan up over a medium heat. 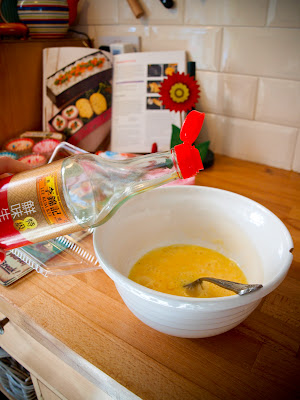 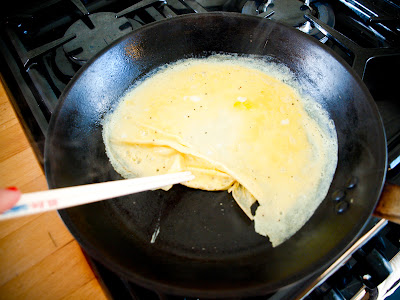 Add another layer of egg and tilt the pan to ensure it spreads all around the base and also goes under your already existing egg roll. Keep rolling the layers of egg around the large egg roll until all the egg mixture has been added and you have a nice big roll of egg. Transfer the egg roll to a sushi mat and roll the sushi mat up nice and tight. Leave this to cool (I gave mine a stint in the fridge once it had cooled down a bit) before taking it out and chopping into slices to be placed into the bento box. 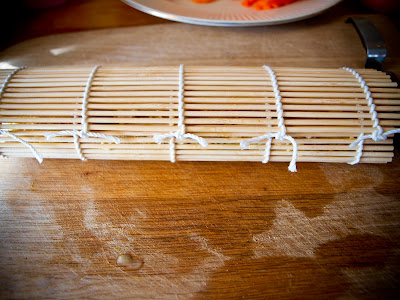 Meanwhile, make the Cucumber Maki. Take the nori sheet and lay it on a sushi mat. Cover the nori sheet with some of the Japanese sticky rice, leaving a little bit blank at the top - this will seal the maki roll.  Don't use up all the sushi rice as you need to save some to put in your box too! Lay the cucumber strips onto the wasabi and then use the sushi mat to roll the  Put a thin stripe of wasabi down the centre, widthways. Chop the cucumber up into four quarters, lengthways. 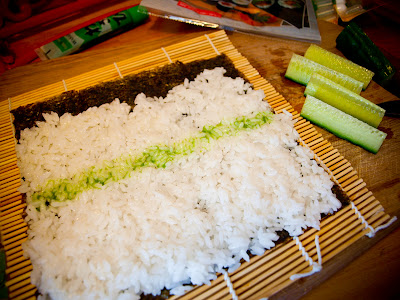 Lay the cucumber strips onto the wasabi, before using the sushi rolling mat to make a roll - squeezing as you go along to get a nice tight bit of sushi. Chop the roll up into about 6 pieces, ready to add to the bento box! Make your bento box look dead pretty and fill up with the rest of the sushi rice, stir fried veggies, fake grass, pretty decorations etc! Now it is ready to take to your lovely friends at work, enjoy! 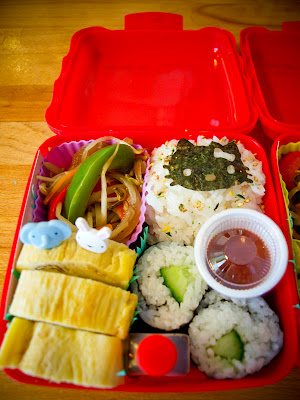 Posted by Jules at 9:13 AM
Email ThisBlogThis!Share to TwitterShare to FacebookShare to Pinterest