If you live in the vicinity of Manchester and have ever visited the Northern Quarter then you will be aware of a tribe of people who frequent that locale known as hipsters.  They aren't hard to spot with their neck beards, thick black glasses and their appreciation for craft beer.  Although that last sentence accurately describes me I don't think I could ever be labelled a hipster as less than one percent of my being is made up of cool and further to that I'm not expending any significant effort trying to be any cooler.  Although some people really loath hipsters (just head over to the comments section of Manchester Confidential to see some regular hipster bashing) I'm indifferent to them and as I've said above it is sometimes difficult to identify a hipster as opposed to a normal, scruffy person like myself.  The only time when I'll be concerned about the presence of a suspected hipster is when somebody has had the misguided wisdom to place them in charge of serving drinks at a bar or waiting tables.  This is because your hardcore hipster has a very clear idea of what customer service should be and this includes making you wait as long as possible while they chat to their buddies, providing a surly greeting, nonchalantly questioning your choice of beer and generally displaying a willful disregard for the basics of good customer service.  Now at the beginning of this paragraph I might have suggested that hipsters are unique to the single square mile of Greater Manchester, that isn't the case as wherever you go in the world you always run the chance of coming face to face with a hardcore hipster. 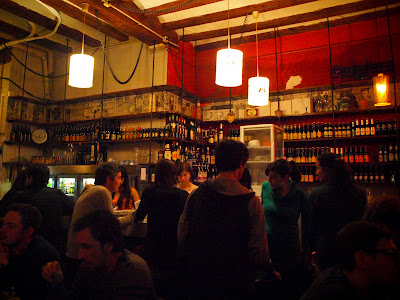 It seems so long ago now but just two short weeks ago we were in Barcelona ticking off as many recomendations as possible of which Mosquito was one.  Labelled as 'tapas exoticas' on their website it is essentially a dim sum bar that sells loads of imported beers from USA and the rest of Europe including Scotland's own BrewDog beers which had surprisingly made the leap to quite a few Barcelona bars.  It is located on one of the more easily locatable streets in El Born surrounded by quite a few other very pleasant bars.  We had been warned that it was 'the hipster HQ for the Born region' therefore assuming it would be busy we got there at a decent time with a mind prepared for a queue.

On arrival the place was full but we were greeted at the door and told there were a few tables in front of us but the wait shouldn't be too long, result.  I'd noticed that I had left the door open as I came in, I turned back to close it but too late, a girl sat right next to it slammed it shut angrily and let out a hiss.  We'll come back to this young lady in a short while.  If like me you are a stupid English person who barely has the linguistic skill to speak his own language, never mind anybody else's, then you are in luck at Mosquito as more than likely the staff will have a higher IQ than me and will speak English but even if they don't the waiting system is simple enough to understand (a big blackboard with names on) as is the menu. 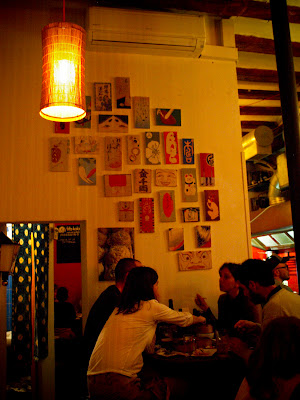 The bar itself is brilliant, a really interesting mix of Oriental decor slapped on top of an already lovely, classic Barcelona bar.  The high ceilings stop the ever full bar from becoming claustrophobic and ensure the heaving crowd provides a great atmosphere instead of a frustration.  Sure the tables are crammed in and you will certainly be eating on the end of somebody else's elbow but they get away with it because of the real buzz that lives in this bar.  Sadly I couldn't fully appreciate it myself as my eyes weren't working, my body had decided to wait until I was on holiday to unleash an infection on my unsuspecting eye balls.  I simply didn't see it coming.  As a result my eyesight was a bit squiffy and I had to wear sunglasses all the time even indoors, at night but if I was going to look like a dickhead trying too hard to be trendy what better place than 'hipster HQ'. 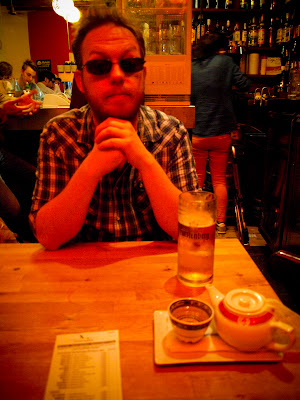 Jules had to pick me a drink from the board for me as I couldn't read it and she chose well procuring me a pint of Fursternberg which went down very well while we waited in the last available space in the bar that could accommodate two average humans.  As we waited a steady stream of new young and good looking dudes and dudettes flocked in and out and they all seemed to know each other which actually made it a really friendly bar to observe.  As each drinker entered and left they unfortunately left the door ajar each time (it was a dodgy door) and each time the girl sat next to it would ritually slam the door and let out a highly audible sigh.  This ritual came to an end when she slammed it directly in to a young mans head as he stepped through the doorway with an audible 'thunk' that put her sigh to shame.  He hit the deck big time and wasn't moving very much, I opened the door so that it wasn't slowly crushing his legs and various strangers leapt to his aid, the slammer sat open mouthed admitting nothing.  It should be noted that this bar is so popular that the presence of a man potentially in his last moments of life did not stop people stepping over his prone body to get in to the restaurant.  I too was worried that we would be called to our table and I would be left with the incredible dilemma of either missing my table or releasing the door which could pinch an artery in his leg effectively delivering the killing blow.  It was OK, he got up about 10 minutes later and got in an ambulance. I'm sure he was alright.  We were seated and got our order in quite quickly.  All was well in the world. 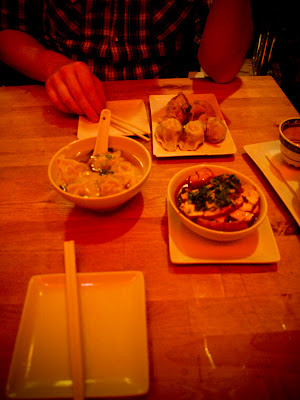 The first item that arrived (everything appears as soon as it is cooked in no discernible order) were two types of vegetable dumplings.  I'm afraid that names of dishes will be in short supply as we have completely forgotten them and we failed to, as we normally do, take a photo of the menu as a reference.  Never mind as I'm sure all their dumplings are as good as the ones we had that completely raised the bar as far as dumplings go.  I always order dumplings if they are on the menu as they are a personal fave but these bad boys were better than any I've ever had before and not by a small margin.  Great burst of flavour on the inside and a sturdy but light encasing of wonton, cooked to perfection.  Alongside these we had a huge bowl of edemame beans which were moreishly salty delivered in a really generous portion. 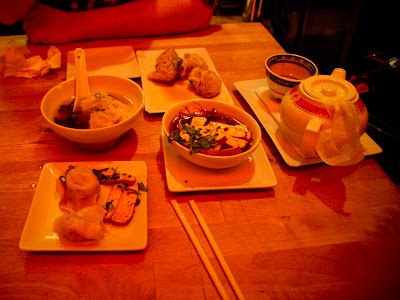 The wonton broth that appeared next looked impressively clear and you might have expected it to be light on flavour if it is light on colour but this was not the case, it packed a huge punch of flavour.  Again the dumplings were perfect but now we had an added texture of crunchy Oriental vegetables floating in the broth that were super tasty.  Alongside this we had smoked and steamed tofu, I'm not a fan of tofu but this looked like a good example of the dish as the tofu was as firm as they can be and the flavours in the broth were a little bit more subtle, a little more complex. 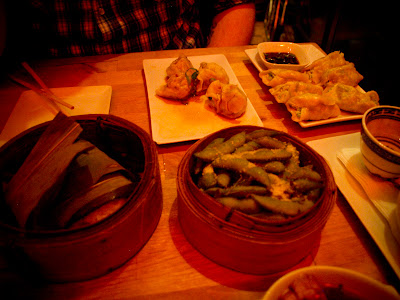 One final dish that we consumed was steamed sticky rice and pork.  This was a real winner and very satisfying.  The sticky salty rice arrived wrapped in banana leaves that once removed just looked like a plain bowl of rice but as soon as you tucked in to it you saw that there were small chunks of pork.  You might be disappointed with the size of the pork titbits at first but each scrap of pork was so full of flavour that it might have been too rich if served in a large portion.  I would love to know how they cooked this. 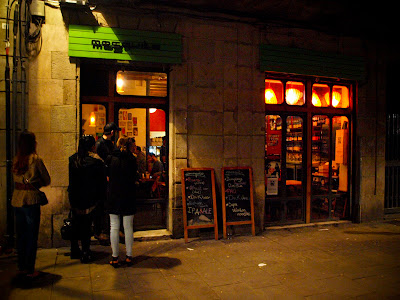 The food was brilliant.  It is a fantastic bar with an absolutely banging atmosphere that doesn't impinge on your enjoyment of your food or a conversation with your fellow diners.  The only mistake that has been made in the creation of the bar is that somebody had the wisdom to employ a full team of hipsters to run it.  Now this is not to say that they were surly or unpleasant like some of our local hipsters, no they were all lovely and chatty when we got to speak to them with an abundance of patience as we tussled with the menu decisions.  The issue was that the choices being made by the waiting staff were utterly incomprehensible.  Here is a quick quiz for you... if you have 16 people waiting to come in to a 60 cover restaurant and you have 12 people who want to get their bill what is the correct course of action?  If you work at Mosquito the action you will take is to hang around the bar having a nice chat with your friends before going to offer drinks to tables who have clearly got drinks while complaining to them that the bar is too busy.  There was just no rhyme or reason to the service, nobody was waiting on any particular tables, nobody seemed to be in charge of the bar, it was unorganised chaos.  So much so that it was actually funny.  It didn't harm our experience in the end but I would have loved another drink over the course of the meal.  It is just infuriating that they just need one more person on the floor to actually watch what's going on and give the slightest bit of direction to the team and it would be absolutely amazing.  It just goes to show that wherever you are in the world there is always the risk of hipster service.  Either way the dumplings are sooooo good that it doesn't matter, I'd go to this restaurant if the service was terrible.  I'd even give it a go if there was a sheet of plate glass in between me and the dumplings that could only be opened with my head.

Posted by Bailey at 6:41 PM
Email ThisBlogThis!Share to TwitterShare to FacebookShare to Pinterest