Tradition is a wonderful thing and the old traditions are the best.  The groom carrying the bride over the threshold, the regular coming together of families for Sunday lunch in the home, leaving cookies out for the ever peckish St Nicholas, the hiding of Easter eggs in not too hard to find locations and the spending of millions of pounds of taxpayers' money to bury a Prime Minister who systematically destroyed the North of England.  I love traditions, I really do and that's why I always like to try and come up with new ones.  That said they always seem to fizzle out, it's a whole heap of work to keep a tradition alive but I think I've finally found one that's going to stick.  PAY DAY STEAK DAY.  It's all there in the name really, every pay day I along with some close buddies will splash out on top quality slab of steak along with a nice ale or wine to celebrate the coffers being temporarily refreshed.  Last month we visited Bem Brasil and it was then we decided we should initiate this tradition.  Where to go next though?  Luckily the gods were smiling on us as perennial Manchester critic Gordo had supplied us with a hand 'to do' list in the shape of this article.  On the basis of the photo included in the article of the wing rib and some other Twitter recommendations as well as good old dose of curiosity we went for SMOAK.  Firstly apologies for the lack of images, all photos were kindly supplied by somebody who managed to bring a device capable of taking photos.  I'm really sorry but you're going to have to read a lot of words without many pictures.

Before I get to the restaurant itself it might be worth a mention that SMOAK have a pretty bad website that struggles to convey anything but the most basic information and even that is plastered randomly across the site.  Stick on top of this the welcoming image of a man on fire on the home page and it's all very odd.  That said their table booking system did the job and they have some very impressive photos of the produce and the bar hidden away on the site.  It's also not going to have an impact on your dining experience, I only brought it up so I could look at that picture of the smoldering bloke as it still makes me laugh every time.

Location wise it is in a weird zone, a place I never spend any time and if I ever find myself there I'm always trying to get out of there as soon as possible... the walk to Piccadilly Station.  Across the road from Michael Caines' Abode and tucked below the boutique hotel Malmaison you will find SMOAK.  Walking through the doors you are greeted with a delightful large bar and what looked like a wonderful collection of comfy but classy bar chairs, it seemed like a lovely warm, relaxing environment to knock back an old fashioned or two.  I didn't get to try them myself as we collected our chums from said bar and we were taken to our table in the dining area. 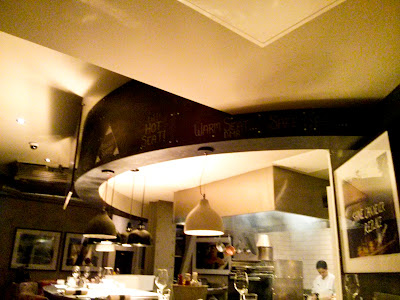 The dining area was different.  The table was made of a giant cog and a sheet of thick safety glass.  The curtains were made of old hessian sacks and big ropes.  I could see industrial strength chains hanging here and there.  There were some booths that appeared to carry through the cosy nature of the bar but we didn't get one of those.  It was cold and unwelcoming BUT we were a group of young (ish) gentlemen here to sample the meat on offer so we actually really enjoyed getting the closest seats to the open meat locker and the Josper oven/grill.  There was a great deal of excitement as we sat perusing our menus and straining to see the specials board (where they keep all the good stuff) and waiting for our first drinks order.  It took a while but our waitress did appear and take our order.  We waited for our drinks to arrive.  It took a while.  At this point I should say the restaurant was not very busy.

As we had been lured here by the digital image so good you could taste it of the wing rib two of my colleagues in the steak eating business ordered the item from the specials board.  Please don't be put off by the lack of steaks on the menu on the cack website, the number of steaks are doubled when you take in to account the specials board which has the much more exciting cuts.  I had plumped for the rump steak.  Not the piffling 250 gram normal menu item but the 400 gram specials board version.  Alongside this we ordered a bunch of sides of fries, chips and sauces.  The ordering process was more complicated than it should have been, our waitress although absolutely lovely seemed to lack some pretty basic waitress skills and had we not double checked our order ourselves I would have received ribs instead of steak. 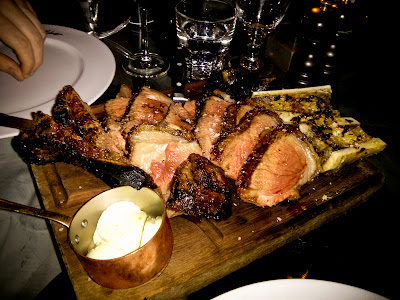 We sat and drank and chatted and watched a stream of amazing looking food go past us and not before too long our food arrived.  The wing rib, as predicted, drew an 'oooooooh' from the table as it landed.  Two more steaks hit the deck as well as one or two sides.  Myself and one of my friends were both missing our fries.  'No sweat, I'm sure they'll be out in two seconds' I thought so I sat back and waited, I really didn't want to start my steak, which looked absolutely amazing, without some sort of crunchy texture to go along with it.  The boys started dishing up their wing rib, there were debates over who would get what chunk of steak, I'm glad in the UK we are not allowed to carry weapons as I feared it could spill in to violence at any moment.  The expected flash of uber violence didn't appear and neither did our sides. 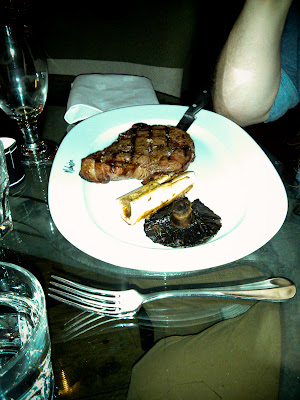 We got a waiter's attention and alerted him to the issue to which we received a 'no problem, I'll see what I can do'.  He was gone before I could tell him that I would expect a hot bowl of chips delivered soon rather than just an appraisal of his ability to deliver said fried potato.  I could hold back no longer so I tucked in to my steak.  I'm not going to talk too much about the flavour of the steak simply because it is hard to put in to words how good this steak was.  It seems everybody has different standards for what makes a good steak, this delivered on every level.  Every steak on the table was cooked to perfection and delivered to the 'cog' searing hot.  Visually they were beautiful with bang on sizzle marks and colour outside and in.  For me the difference between a good and a bad rump steak is in the fat, a bad rump steak and you are going to be avoiding the fat, a good rump steak and the fat should be the best bit and it certainly was here.  The fat was a precious commodity that I tried to distribute between each forkful.  NOW WHERE ARE MY FRIES?  Sadly the fries did not appear, despite two more chases, until I was half way through my steak.  An unforgivable tragedy like no other, when they did arrive though they brought that final missing crispy texture that is the ideal partner to a great slice of steak.  When all the elements were in place I can safely say that this was the best steak I have ever eaten.  On the side of the steak were portabello mushrooms and bone marrow which were both divine in their own right.

You may have got the message that the service is not quite up to scratch.  There was one more strange phenomenon that needs to be pointed out.  Every member of floor staff that delivered a plate or beverage to the table had a complete lack of ability to place it in front of (or even in the close vicinity of) the person who ordered it.  At first a minor annoyance, it became a puzzling annoyance and ended up a humorous annoyance.  I'm not sure what the issue was, when the description of the items were announced we would dutifully indicate who they belonged to at which point we were willfully ignored.  Perhaps the staff have metal plates in their arms and the gigantic cog table is magnetic meaning their limbs are pulled table-wards the second they approach.  That is the only explanation I have.

Steaks dealt with and fries removed from bill we were on to dessert and I attempted to expand the PAY DAY STEAK DAY tradition to include a whisky in place of dessert.  One companion complied but two other rebels refused and ordered sugary sweet desserts.  I told you these tradition things are hard to get going, too much free choice and not enough mindless duty bound decisions in my mind.  Predictably the whiskies took ages to deliver and had to be chased twice but the desserts arrived pretty quickly.  The crème brûlée delivered was a wide beast offering maximum caramel, I am assured it was a winner.  The other dessert was from the specials board and came in the shape of a home made snickers bar accompanied by a blob of more creamy than cream ice cream.  It looked like the kind of dessert that makes you wonder if your friendship could survive a snatch and grab attack.  Again I was assured it was top notch. 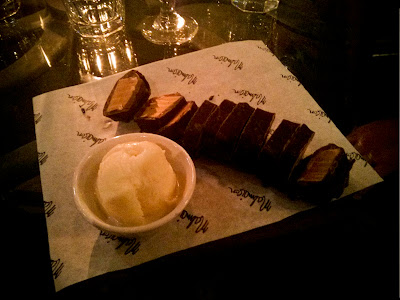 If you visit SMOAK there are a list of things that you will probably experience.  You will probably be disappointed with sub par service, you will probably not enjoy the decor, you will definitely have to reach across the table to retrieve your drinks/food, you will be unimpressed by their weird website BUT you will almost certainly get to eat one of the best steaks in Manchester which absolutely makes it worth the trip.  SMOAK have put me in a bind, the tradition is that we go on pay day to eat a steak in a new restaurant every month.  I already want to change my own tradition so that I can go back to SMOAK every month.

Posted by Bailey at 2:19 PM
Email ThisBlogThis!Share to TwitterShare to FacebookShare to Pinterest