Jules' dad often tells us that when he was a boy growing up in Mitcham (located in SARF LANDAN) he would be regularly lambasted by his mum for eating his fish and chips on the street corner instead of bringing them home to be eaten with a knife and fork.  Roy was always a little bit disappointed with this as it meant the food was a little cold and soggy when it hit the plate but more importantly he missed out on the fun bit which was shoveling the fried haddock and potatoes down his neck right there on the street with his friends straight after seeing it emerge from the fryer.  I've got to agree with Roy, eating food on the street with your friends after seeing it put together on the spot is a brilliant experience.  I've also got to agree with his mum, you do normally end up looking a shambles with food down your shirt and covering most of your face but that's part of the fun. 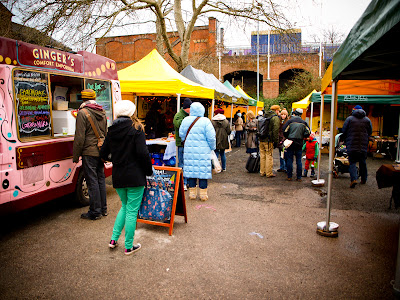 Fast forward 40 years and here we are in the 21st century in a time when street food of all kinds couldn't be trendier in that London, food publications are knocking up street food articles left right and centre while a steady stream of foodies are using food stalls as a gateway in to the world of professional food production.  Here in Manchester we have our own street food heroes in the shape of Guerrilla Eats and since we last wrote about them they've refined their formula by including beer (a wise choice) as well as a couple of new traders.  Their night market is now a real hot spot with a good following and in that respect we (as in Manchester) have mirrored some of the more prevalent street food cities, let's hope that they carry on going from strength to strength.  I still think that leaves the door open for a slightly different market to operate during the day with a different crowd in mind and that's where Levenshulme Market comes in. 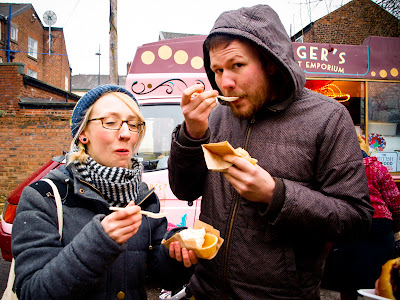 Last year Manchester City Council started a new market in May and although it looked quite lively to us by the time December rolled around they had deemed it 'unprofitable' and therefore it was heading towards being canned until a small group of local residents and traders stepped in to turn it in to a social enterprise aiming to plough the profits back in to the local community.  First of all this kind of thing warms my bones and reminds me that there are some good people out there. Secondly, as residents of Levenshulme ourselves, we were really happy that the market would continue as it is an important opportunity for the area to grow. 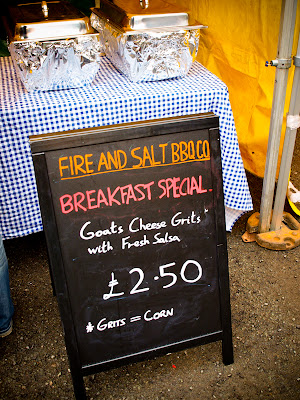 So the market isn't just about food but we aren't really going to cover the non edible products on offer as they aren't as close to our heart as the food stuffs.  That said there are some lovely local artists selling hand made bits n bobs as well as vintage homewares/clothing, certainly a good showing for those of you that way inclined.  We were there for the food so let me tell you what they had to offer. 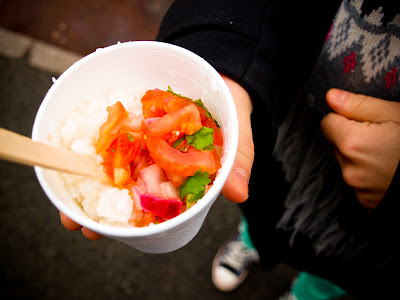 For starters lets have a look at the Guerrilla Eats crew that were there on the day.  Perennial all round good guy and street food lunatic Mal from Salt & Fire BBQ was there not only selling huge slabs of meat (in the shape of perfectly cooked brisket accompanied by a banging bbq sauce) but also branching out in to the world of ground corn with their inventive breakfast dish of goats cheese grits and fresh salsa.  The grits was a nice warm, comforting treat on what was a painfully cold winters day (Summer had forgotten to get out of bed). 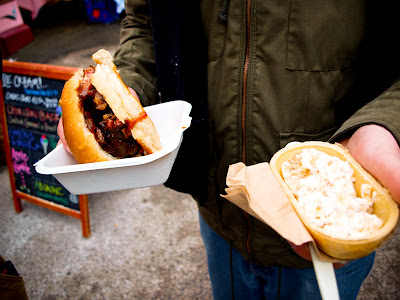 I returned later on to grab some of the brisket for my lunch and I was not disappointed!  I find it hard to believe that there are many people out there in the UK that are banging out proper BBQ at this quality.  Worth the trip wherever you can find him. 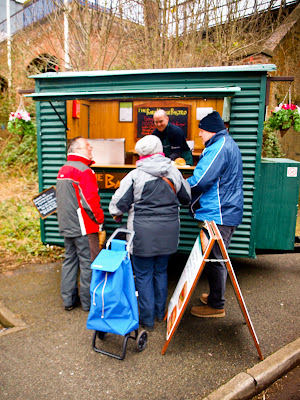 In between brunch and lunch there was a third un-named eating opportunity at which point I indulged in a Barnhouse Bistro burger.  If you haven't tried a burger from the instantly recognisable mean green van then I'll let you know the very simple formula that makes the Barnhouse burgers absolutely stand out.  Fantastic beef + delicious bun + super fresh topping = Top burger.  The bit of the combination that sets Barnhouse apart is the toppings, where some burger slingers tend to pile up as many gut busting, dense toppings as possible Barnhouse go the other way and make their burgers seem a little bit lighter and instead of punishing your mouth they almost rejuvenate it!  What this means is that quite often the first words that come out of your mouth after finishing one is "I could do another one of those right now".  The topping on this occasion was lime and jalapeno mayo.  Zing. 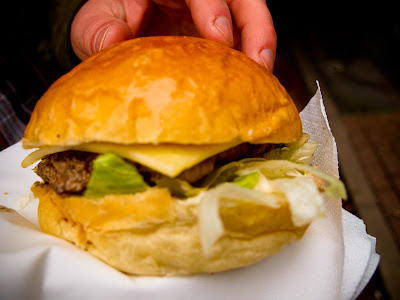 Once you've eaten your meat and grits and more meat you really need to make sure you get a dessert and luckily Ginger's Comfort Emporium was on hand with their best efforts to put Ben & Jerry's out of business.  That, in my mind, is a very real possibility in the Manchester area as I don't understand why you would choose any other ice cream if you have access to the addictive pots Ginger has on offer.  On this day we went for an apple crumble flavour as well as a yet un-named almond based vegan 'ice cream' that Ginger was currently experimenting with.  Suffice to say they were all brilliant but we weren't happy walking away without a take home tub of 'Chorlton Crack', a name that would cause me some minor embarrassment in a restaurant a week or so later. 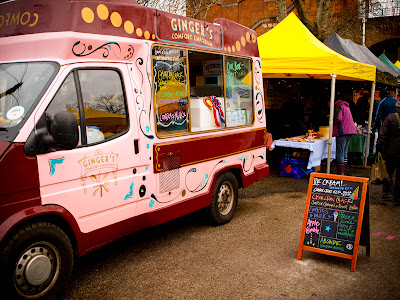 The other two Guerrillas who were at the market were Margo And Rita's and Chaat Cart.  Talking about vans that you can see from a mile off I think Margo And Ritas are the champions of fancy food vans in Manchester.  Sadly we didn't get a chance to try their food as we were full of food already and they didn't have a veggie option available by the time we got round to them.  I am reliably informed by buddies and the internet that their food is top notch.  Next time Margo, next time.  We've written about Chaat Cart a couple of times before, absolutely amazing veggie Indian street food, the kind of veggie food that turns meat eaters' heads.  Sadly we didn't get to try their food on this day but we can personally recommend their dosas, we love them and we are very happy to know we can indulge in their food on a regular basis right on our doorstep. 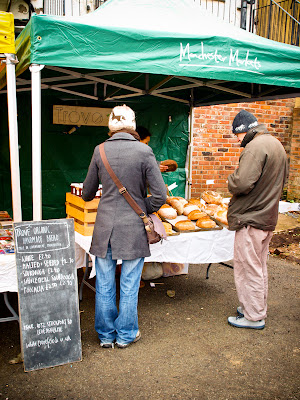 So Levy Market shares a few of the Guerrilla Eats favourites but it's also got it's own range of producers.  Of that group we've got local champs Trove selling their fantastic breads with our top loaf being their sourdough which rivals The Barbakan (of Chorlton) for quality.  The Market's next door neighbours POD Deli had some very welcome hot items including their 'rasta' dog (which always seems to generate a queue on its own) as well as mulled cider and a beer or two. 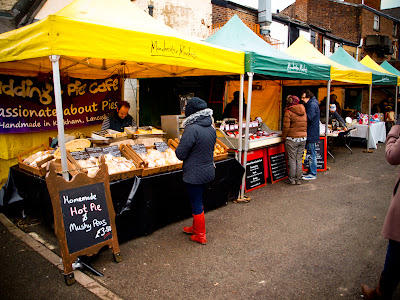 Top quality food producers also came in the shape of Bobby's Bangers (sausage supremo), The Moocher (pies, pots of delicious sauces and other things that come from fields and farms and based just round the corner in Levy) as well as one of our favourite stalls Mininki's Kitchen (we purchased some pistachio dukkah from them that tastes amazing). 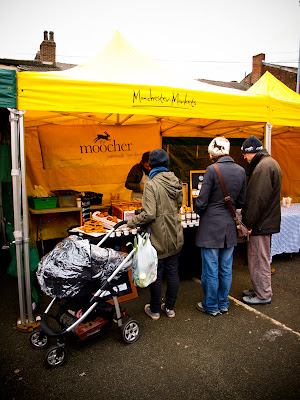 One other stall worth mentioning that we hadn't encountered before was Robinson's Bakery. Robinson's specialise in traditional British bread and confectionery which, when laid out en masse on their large stall nearly made my jaw drop off.  Little pies, buns, loaves, tarts, cakes and even potato bread was all on offer.  Despite our best intentions we had already over eaten when we got round to Robinsons so just invested in a Manchester loaf and one of the potato breads for the coming days, they were both brilliant.  It was only afterwards that I discovered that they supply some of the Guerrilla Eats lot with their top quality bread buns.  Lovely stuff. 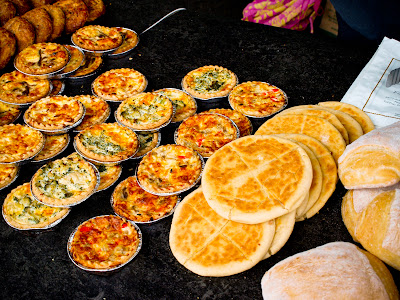 It didn't end there but unfortunately my appetite did and so I couldn't try any more of the food stalls present and my memory being what it is I couldn't tell you the names of the places, hopefully that gives you an idea of how big the choice is! 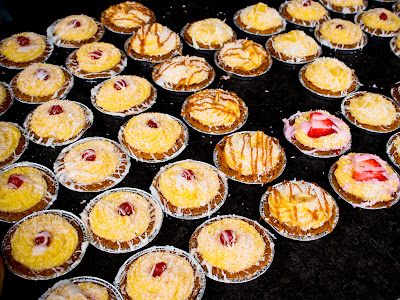 To sum it up we loved Levenshulme Market and we couldn't have expected a bigger success on the relaunch especially considering the arctic temperatures.  The quality and variety of traders was absolutely fantastic, certainly better than the previous incarnation of the market and the other Manchester markets run by the councils.  The other big advantage the market has is that it has a real buzz to it and that can only be put down to the organisers who have put some real effort in to making the market a real event with entertainment and some decent promotion via Twitter and the old fashioned method of posters and flyers. 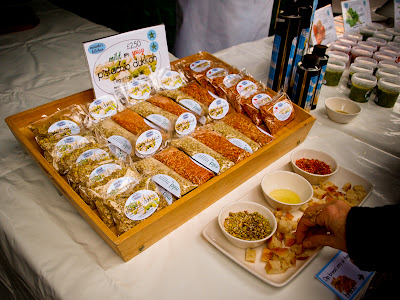 I honestly believe that Levy Market could make a real difference to Levenshulme.  I can certainly see the market going from strength to strength (it sounds like there is a little bit of competition to get on the upcoming markets as a trader!) and I don't think it's long before it becomes more widely known across South Manchester so more people make the trip to Levenshulme.  In the best case scenario though I could see some people being inspired to start a market stall which then makes the leap from Levy Market to Levy High Street leaving a new spot for an inspired market trader and really strengthening the area which draws more people in to the area to spend their funds on local traders rather than the big super markets or chain fast food shops. 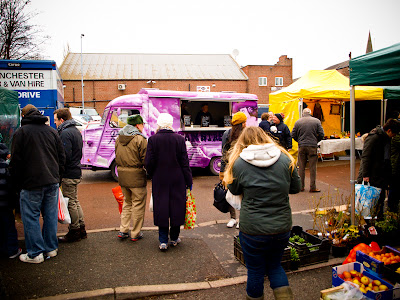 So if you are a food fan looking to try something new street foods, stock up on great produce as well as having a good mooch round non food stalls then Levy Market is for you.  Also Levenshulme really isn't very far away from you wherever you are, as long as you can get to Piccadilly train station then you are only five minutes from Levy as the market is actually in the Levenshulme train station car park.  ALSO you are supporting a great cause in the form of local people starting local businesses.  One more reason to plan a trip to the market is that it's actually a really good place to start a good pub crawl into Stockport (our plan for the next month's market).  There are lots of reasons you should come along to Levenshulme Market and I can't really think of a reason for not coming along.  See you on the 4th Saturday of the month.

Posted by Bailey at 9:37 AM
Email ThisBlogThis!Share to TwitterShare to FacebookShare to Pinterest