This year we have spent a lovely Easter weekend with my mum in Sheffield. She has been really excited for a while now since discovering a recipe for Cake Pops in Waitrose, which would go perfectly with the Easter tea she was planning. 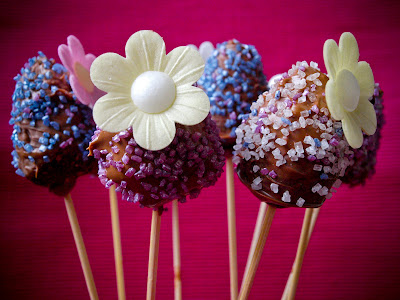 I had never made cake pops before this occasion. I was a bit scared of them, they looked so complicated. 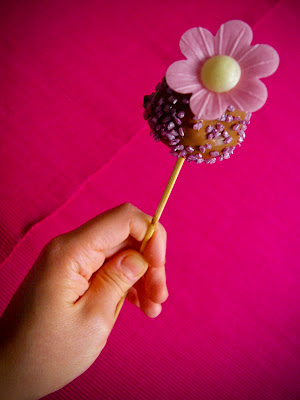 However, looking at this Waitrose recipe my mum had, it all seemed really rather simple - easier than falling off a log. I wished I had tried cake pops out sooner. So, to make the cake pops more Eastery for our Easter tea, I thought I would make them egg shaped! 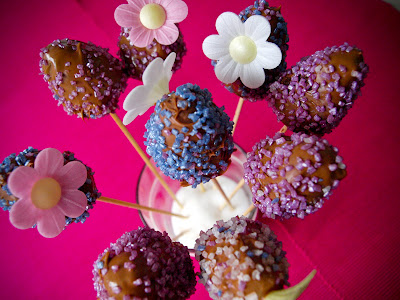 I also adapted the recipe a bit because mum had bought extra ingredients and I didn't think she would want bits of Madeira cake and chocolate lying around. This meant they were probably more chocolatey which to me can never be a bad thing. 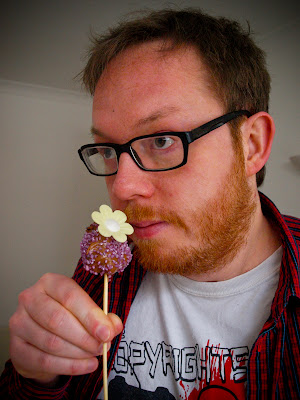 The Easter Egg Pops went down rather well with Bailey who said they were rich and chocolatey. He liked the crunchy exterior with the ganache-like chocolate coating and the cakey centre. 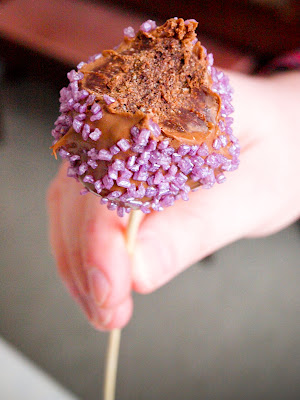 I will definitely be making more cake pops in future. Dead easy, lots of fun to make and eat and a great way to use up leftover cake (does that exist?)! 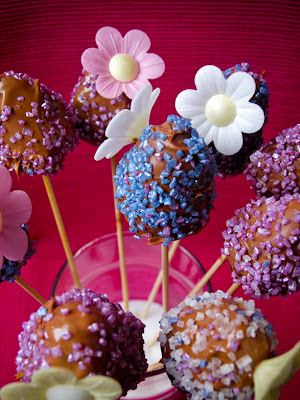 We were very pleased with the Easter Egg Pops and had just discovered the wonders of Vine and so had lots of fun making our first video... Happy Easter Monday everyone! 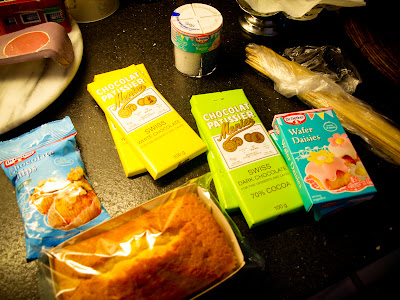 Start by crumbling the cake up in a large mixing bowl until you have fine crumbs. 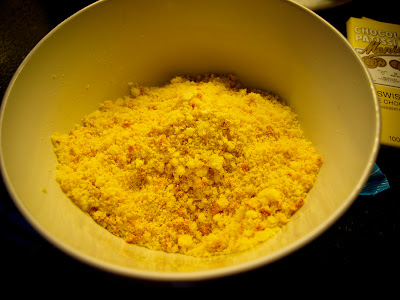 Mix the white chocolate chips in with the cake crumbs. 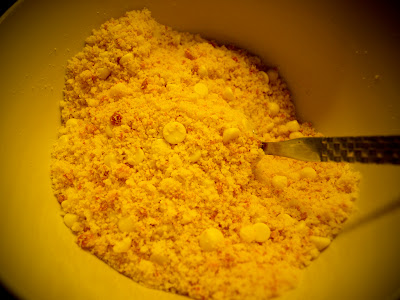 Melt the dark chocolate over a bain marie or using a microwave. Stir the melted chocolate into the mixing bowl with the crumbs and chocolate chips until all the crumbs are absorbed. You will have a nice sticky mixture. 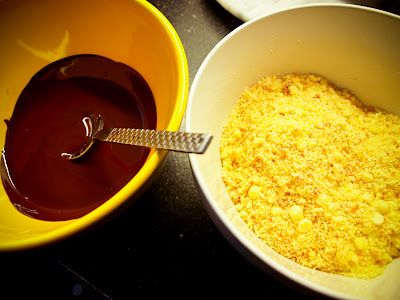 Take large teaspoonfuls of the cake mixture and mould them into egg shapes with your hands. This is lots of fun and not too messy but you will need someone to turn the tap on for you! 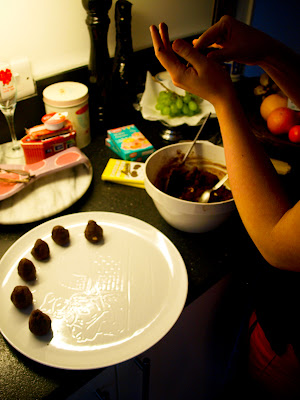 Place the little eggs on a plate or tray that has been covered with baking paper. I forgot the baking paper so had to scrape them off the plate with a teaspoon once the chocolate had set!

Leave the eggs to cool and set fully. We left them over night to make sure. Melt the milk chocolate in a large bowl. Dip the ends of the sticks into the melted chocolate. 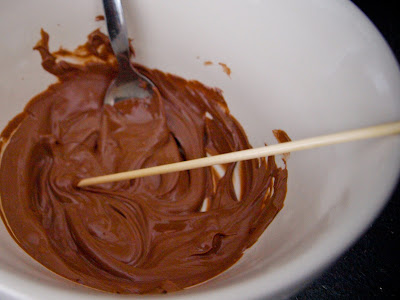 Take the chocolatey end of the stick and carefully push it into the egg. 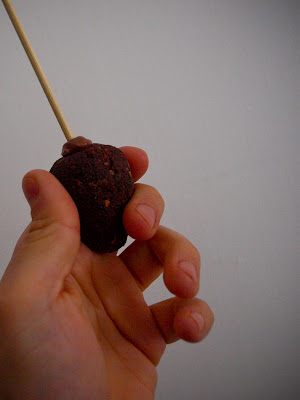 Leave the chocolate to cool and set again before continuing. 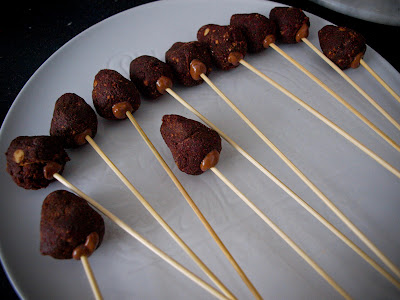 Once the chocolate has set, you will need to remelt the milk chocolate. Meanwhile, half-fill a pint glass with sugar. 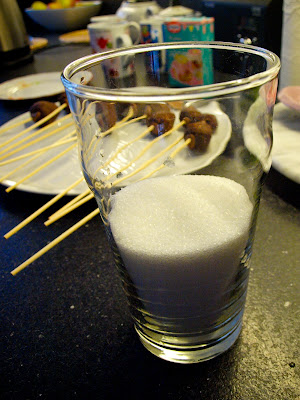 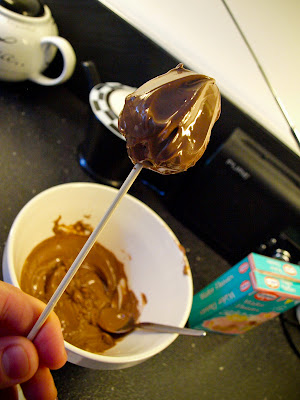 Sprinkle the Egg Pops with some shimmer sugar. 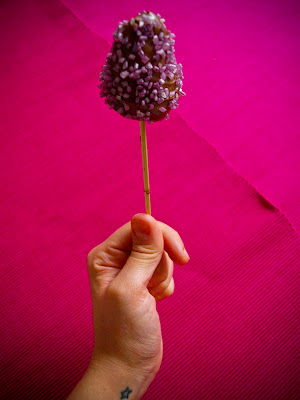 Decorate the Egg Pops with whatever other bits and bobs you want. The wafer daisies looked nice although they don't taste of much. 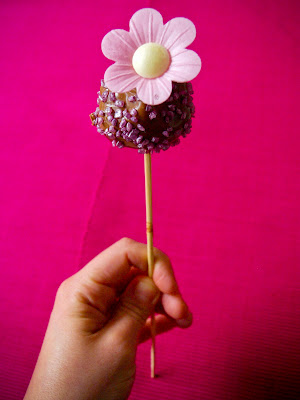 Stick the Egg Pops into the sugar and leave the chocolate coating to cool and solidify before serving your Easter treat! 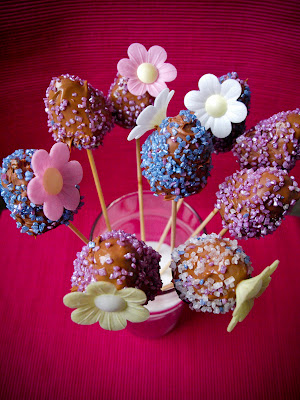 Posted by Jules at 4:00 PM
Email ThisBlogThis!Share to TwitterShare to FacebookShare to Pinterest