One eatery I have consistently heard people banging on about since I moved to Manchester is Bem Brasil. People honestly talk about this place as if it's some kind of paradise on earth but with meat. One thing that consistently happens when people are banging on about it and its magical meats is that they will stop talking suddenly, look at me pityingly and say "Oh... but you won't be able to eat there..." 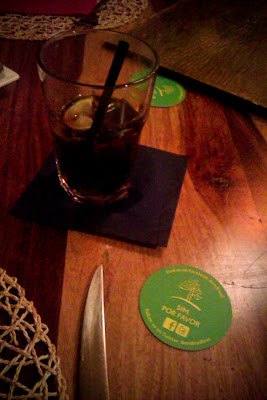 It wasn't until one time my my parents and auntie and uncle were visiting but we were going to a wedding and we packed them off there, that someone actually recommended it to me. My family apparently had a rip-roaring good time (to quote my mum: "We were like crazy!") and both my parents said that they thought I would actually really like the salad selection and the fish option they have. They also gave us four £5 off vouchers they had procured and I am not one to ignore a good voucher. So we decided to head over to Bem Brasil a couple of weeks ago with our ace friends and seasoned Bem Brasil pros, Kat and Rob for a midweek treat.

The way it works is as follows: you arrive at Bem Brasil and are given a rather large plate as well as a little card that allows you to indicate whether you want them to keep bringing you meat or not. Simples! 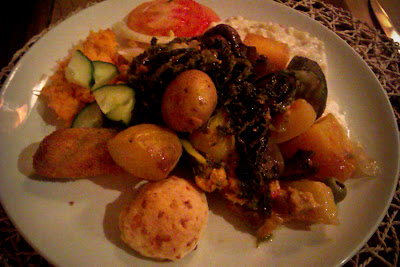 You start by heading over to the buffet which is essentially an all you can eat but I have to say I was impressed with the standard of food on offer. As a vegetable loving pescatarian there was plenty of things for me to tuck into including olives, salads, deliciously garlicky potatoes, yummy roasted veg and my favourite side of the evening, an awesome, rich cauliflower cheese. I also couldn't believe it when, on top of everything else, a basket of crispy, salty fries was deposited to our table. So much food! 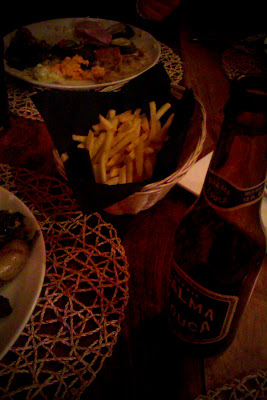 The absolute winner of the evening for me was the amazing Pão de Queijo - traditional Brazilian cheese bread. Having unfortunately never been to Brazil I can't tell you if this is a good example of the stuff, but it did remind me very much of the Colombian Pan de Queso I've chowed down on many a time and I have to say these light, airy, pillowy, cheesy balls of goodness made me very happy. 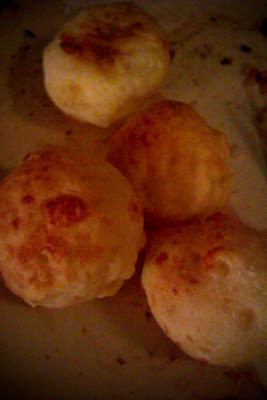 So once you're all buffet'ed up, the Bem Brasil dudes come round with huge skewers of every type of barbecued meat imaginable, cut you a slice off and you basically eat yourself into a meaty coma. I have to say even I was impressed with the variety of meat - it seemed like every minute or so there was a different animal / flavour / cooking style brought over. Bailey's verdict was that most of the meat is great although it can be a bit of a gamble depending on the cut you get at the table. He tasted the most delicious bits of pink, juicy, rare meat but also a couple of charred ends. This is all part of the fun I would imagine and seeing Rob looking so happy when put in charge of the little meat pincer to catch the freshly carved slices brought a smile to our faces. 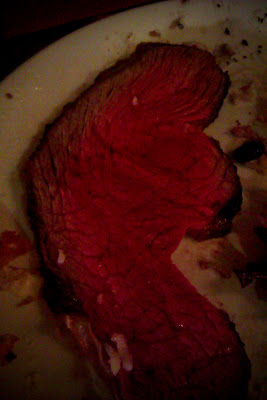 The wait I had on the seafood platter was bordering on a little ridiculous seeing as by the time I got it everyone else on the table was getting the meat sweats but it's not like I was short of things to eat in the meantime. This was quite the badass seafood platter of Salmon, Portuguese Cod and Prawns. The prawns were plump and delicious while, although a bit overdone for me, the fillets of fish were packed with flavour. I felt very pleased with myself after having demolished every last scrap. 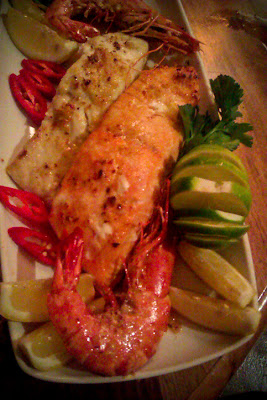 Finally, our sweet tooths were satisfied by fresh slices of barbecued pineapple - cinnamony, sticky, juicy goodness. Who knew pineapple could taste so lovely?

So I, a pescatarian - shock horror, visited Bem Brasil and actually had a lovely time. I have to say I wouldn't recommend the place for a first date and make sure you are starving hungry before you go because for me, the appeal is eating loads in a fun environment and letting yourself have a night of being mega greedy. The amount of food flying about the place really is something to behold and you might as well get stuck in. You're also really well looked after by the cheeky chappies who work there - most of whom seem to be South American or Spanish/Portuguese and all lovely dudes.

I should mention that a night at Bem Brasil doesn't come as cheap as some of the other buffet type restaurants and although the food is a lot better than those sorts of places, you might be disappointed if you're in search of really top quality grub. But if what you're after is going and eating lots of tasty stuff then, to use Rob's words, "going home and being horizontal", Bem Brasil is a great call.

Posted by Jules at 9:19 AM
Email ThisBlogThis!Share to TwitterShare to FacebookShare to Pinterest