On Saturday we were enjoying the luxury of having nothing to do and nowhere to be. I love that feeling of "the Manchester is your oyster" especially as there are so many places cropping up all the time that we want to go to. Throwing ideas around for a lunch venue, I saw Bailey's little face light up as soon as I uttered the fateful words "What about BrewDog?" 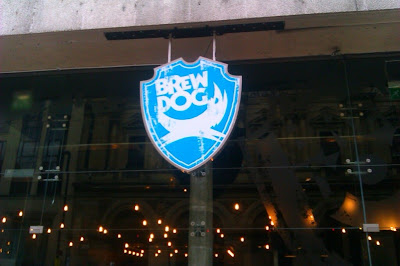 We'd heard about BrewDog from reading about it on Manchester blogs The Hungry Manc and Things to do in Manchester, a general furor on Twitter as well as some recommendations from friends. Now I am a person who doesn't like beer. The only time I can remember drinking a beer in recent years was in Leeds when someone handed me one while I was dancing on a table but I would not have consented to this under normal circumstances. Bailey on the other hand loves a good beer so I was happy to accompany him as he quaffed a couple of pints especially with the promise of some punk rock nosh thrown in. 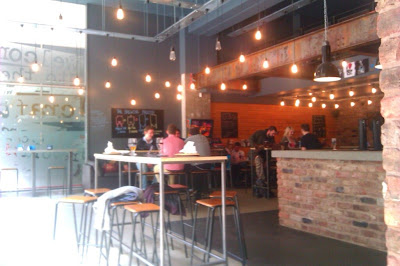 First impressions were good as we entered the airy and light glass-fronted establishment and found ourselves a seat in the coolest little alcove area to the side of the bar. A great atmosphere for a city centre pub on a Saturday afternoon too. Bailey got himself a nice pint of Zeitgeist which is apparently a "lovely black lager". 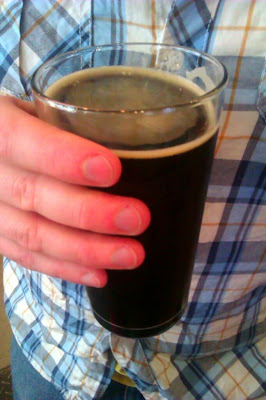 I however felt a bit out of sorts. My usual beverage of rum and DC seemed like a bit of a cop out in a place with a million beers on offer but I was very pleased to still be getting a posher drink than usual when I saw the barman pour a bottle of Fentiman's Curiosity Cola into my rum. 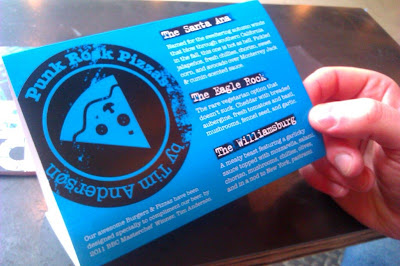 Once back in our secret hidey hole we had a look at the menu and were pleased to see it had been designed by Masterchef winner Tim Anderson - a contestant who if I remember rightly came up with a load of crazy amazing dishes and knew loads about Japanese food too. It's a mega simple menu of just six items - three burgers and three pizzas. We both decided we were in a pizza mood even though we had just seen a nearby table receive the most awesome looking burgers so I ordered the only veggie option - The Eagle Rock pizza while Bailey went for The Willamsburg pizza. 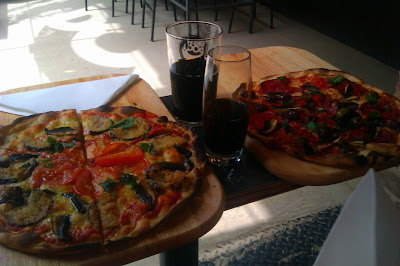 There were no prices on the menu so we were a little surprised at the bar to discover that the pizzas were a tenner a pop, but it all became clear why when they arrived and they were so huge that two of the bad boys didn't even fit on our table and were hanging off the edge! You could definitely share one of these between two. 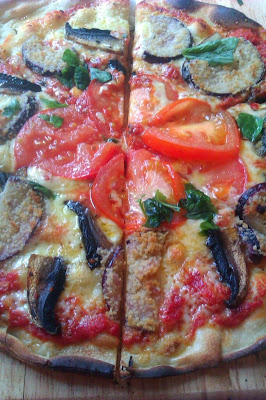 My Eagle Rock pizza was topped with cheddar, mushrooms, tomatoes, basil leaves, fennel seeds and breaded aubergine. This was delicious but really unusual at the same time. The tomatoes were all in the middle which meant that the first bite of each slice was loads juicier than the rest of the slice. The veg were nice and tender and the aubergine was breaded in (I think) crispy bits of cous cous or some other grain which was weird but in a good way and added a great crunch. Really scrumptious. 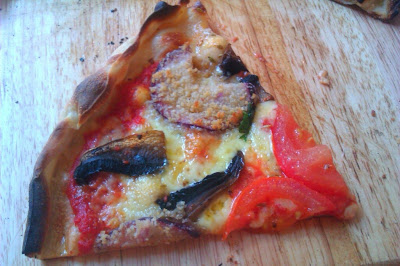 Bailey's Williamsburg looked really healthy but when you looked closely you could see that it was completely meat-tastic. It had what was described on the menu as a  "garlicky sauce"  with mozzarella, salami, pastrami, chorizo, mushrooms, chilli and olives. Bailey loved the tasty toppings and said it was "a good overall pizza". Normally, being the worst veggie ever, I have a taste of a meatless corner of Bailey's pizzas, but this one was so covered in good quality meat I couldn't get a look in. 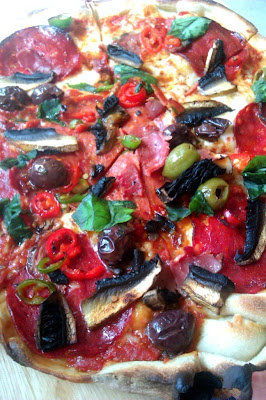 One thing we were both absolutely fathomed by was the bases - it was unlike any pizza base I'd ever had and I would love to know what they are made of. In fact I tweeted Tim Anderson himself to ask but he is yet to reply so the mystery remains, harumph. It was a brilliant, although very unusual, pizza base anyway. As always (especially as it was so big), it took me ages to eat my pizza so by the time I was on the last couple of slices my pizza was absolutely stone cold but it was one of those rare pizzas which tasted just as good, if not better, when cold. 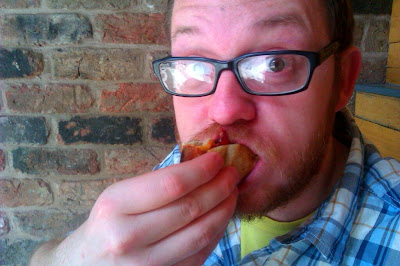 After our nosh Bailey still fancied another drink so got himself a Hardcore IPA which is so named due to it being 9% volume. Bailey said it was "rich but not too strong". To amuse myself while he was at the bar I went and helped myself to Trivial Pursuits from BrewDog's pile of board games and then quizzed Bailey on various topics while he had his beer. Tremendous fun was had and we were quite sad to return to the real world when we were forced to leave due to having spent all of our money. 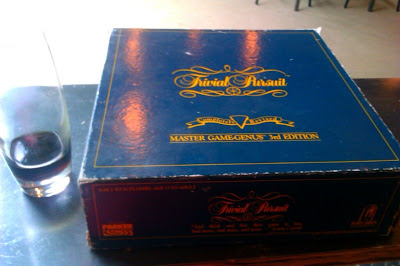 We will most certainly be returning to BrewDog and I expect it will be soon. Even though it was a modern bar with a forward thinking attitude to beer, I would recommend it to anyone, from the most traditional of real ale connoisseurs to people like me who don't even like beer. The staff were super nice and helpful too and I quite regret not asking them to recommend me something that might convert me to start drinking beer. I definitely will next time and I know they will be more than happy to help. In fact the only problem with the staff was that a rare situation arose in which Bailey did not have the best beard in the room which caused some beard envy. I'm now thinking back to a couple of weeks ago when Bailey's friend Justin came to visit and we were complaining that there were "no good boy pubs in town", well now we know there is. Excellent.

Posted by Jules at 6:40 PM
Email ThisBlogThis!Share to TwitterShare to FacebookShare to Pinterest