It was a while ago now that we went to Revolución de Cuba in Sheffield for a spot of lunch and a few... OK a lot of, cocktails. I meant to blog about it at the time but forgot. However, I keep seeing the photos I took that day on my phone and thinking back to how ace it was so have decided I will share the experience with you, my faithful readers. 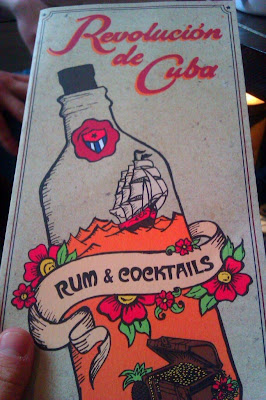 Revolución de Cuba is the new venture brought to you by the people behind Vodka Revolution - yes, the purveyors of terrible tepid test tubes. A tired franchise if there ever was one. So they have obviously decided to do the sensible thing and abandon that sinking ship (apparently soon all Vodka Revolutions will change into them) in favour of something a bit more up to date. When you look closely they've actually kept the same basic 'format' for their Cuban themed bars - rum cocktails, flavoured rums (I believe the receptacle is now the traditional shot glass, no test tubes in sight) and above average pub food. However the whole thing seems to be a bit more classily done, with a Latin American twist to the whole thing which we all need a bit of in our lives. They also have a fantastic selection of rums which is a rarity and perfect for people like us who do like a nice glass of rum every now and then.

I also love the décor which is really authentic right down to the handmade tiles, in fact on several occasions found myself daydreaming that I was in the film Chico and Rita and not rainy England. 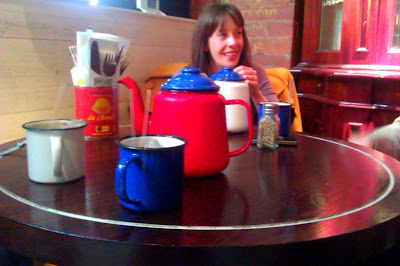 On arrival we were very jealous to see that Craig and Francesca were already drinking cocktails out of lovely enamel teapots and cups - like the ones you have when you go camping. Not wanting to be out-teapotted, we immediately ordered our own one of Cuba Libre. A winner it was too. 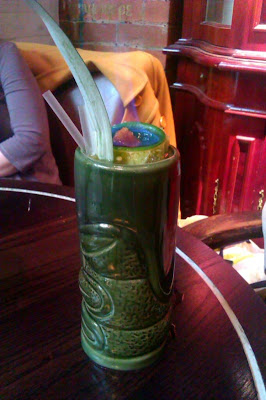 Craig also upped the excitement by ordering a Zombie, complete with flaming sugar in inside-out lime half. 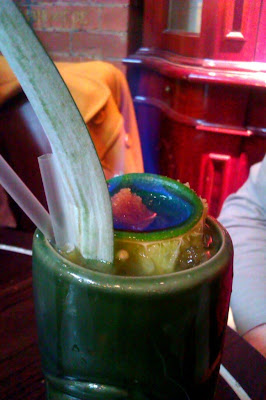 Food-wise, there is a great menu comprising tapas, burgers, burritos etc. etc. Craig and Francesca told us they often pop in for the Mojito and Burrito offer. Bailey took advantage of said offer and was presented with a Steak Burrito. On first glance he was a bit disappointed by its apparent petite appearance, but as soon as he tucked in he realised the thing was jam packed with good quality steak that filled him right up. He really couldn't believe how much steak was there in fact. 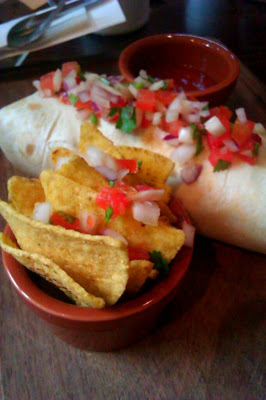 There would be no complaints about size to be heard from Mr Craig Ockwell when his gargantuan Ultimate Cuban Hot Burger arrived. We were gobsmacked. It can be seen here belittling my dinner even though it's in the foreground of the picture. Mental. Love those enamel cups too. 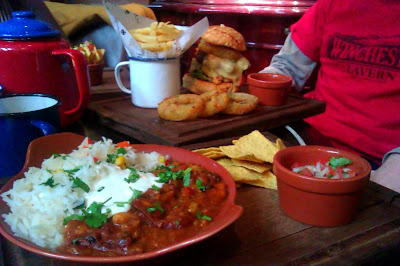 I decided to have the Five Bean Chilli which came with a nice pot of salsa and some crunchy, salty tortilla chips. This was really lovely, topped with sour cream and mildly spiced. I added a fair few drops of Tabasco which pepped it up to my taste. I thoroughly enjoyed this and it really lined my stomach for the rum drinking that would ensue. 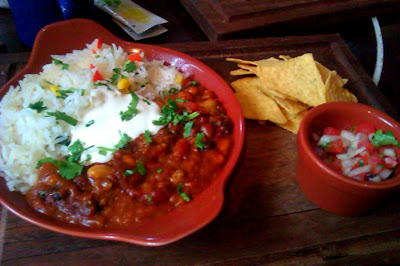 We loved our visit to Revolución de Cuba and if we lived in Sheffield we would definitely go there often as Craig and Francesca do. We are very much looking forward to the reported opening of a Manchester branch and will definitely be checking in on them for a cocktail or two when we arrive.

Posted by Jules at 5:26 PM
Email ThisBlogThis!Share to TwitterShare to FacebookShare to Pinterest