The other week we paid a mid week visit to Kosmos Taverna just down the road from us in Fallowfield.  We had passed the place loads of times and were always interested in its old school appearance, we love old school Italian trattorias as the food is always hearty and this looked just like the Greek equivalent.  On top of that some of our buddies had recommended it to us so expectations were high. 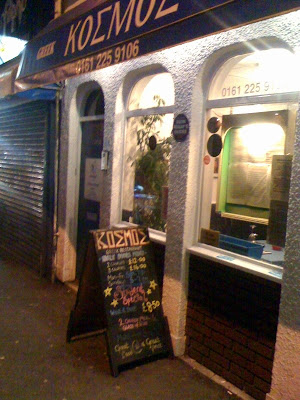 When we arrived the place was pretty empty but we still received a warm welcome and were shown to our table and provided with the menu and the list of daily specials.  Jules had already had a good look at the website menu so it didn't take long for her to make her mind up and go for the vegetarian mezethes which was a 3 stage meal made up of Kosmos Spicy dip, Melintzanosalata, Houmous, Tabbouleh, Mixed Salad, Olives, Feta Cheese and Pita Bread,Spanakotyropitakia, Halloumi, Courgette Rissoles, Falafel, Revithia, Stuffed Vegetables,Vegetable Kebab and Cracked Wheat Pilaf.  It wasn't such a quick decision for me but I ended up going for the Chicken Saltimbocca served with a sage and butter sauce and roast vegetables.  I had seen the traditional veal version of this dish cooked on Masterchef Australia last year and thought it looked amazing.  I went for the dependable halloumi for my starter. 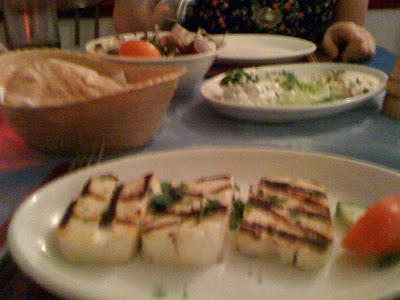 When the starters arrived we tucked straight in and we were not disappointed.  Jules' Greek salad looked great to me despite my aversion to salads.  We shared the pitta bread, houmous and tzatziki and I have to say all three elements were the best I had ever tasted.  The pitta bread was crispy on the outside and lovely and doughy in the middle, absolutely perfect.  I simply do not understand how they got so much flavour in the dips and the tzatziki had a really creamy texture to it while the houmous was super smooth.  My halloumi was pretty standard but as it is one of my favourite cheeses it still went down pretty easy. 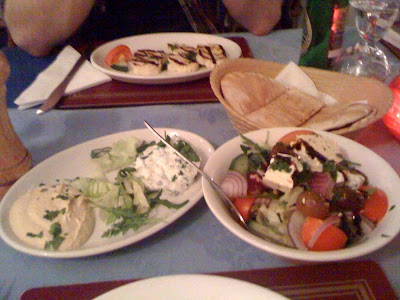 Next came my main course and Jules' second 'stage'.  Jules' dishes were the courgette fritter, beans, falafel, feta parcels and stuffed tomato.  Everything was pretty tasty and looked really appealing especially the stuffed tomato which was full of flavour with a great crunch to it from the seeds.  The only complaint was that there was nothing really to tie the dishes together so it would have been better served with the first 'stage' with the bread and the dips. 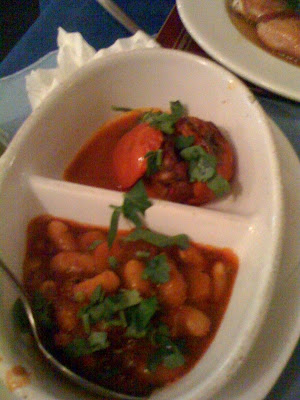 My dish was slightly different.  For starters it was a huge piece of meat, intimidating even to look at! Tucking in to the meat it was really really nice, well cooked, moist and wrapped in a super salty slice of prosciutto ham.  Despite this, due to its size, it got really boring as I waded in to it.  The problem was made worse as both the sauce and the vegetables were really bland.  I didn't manage to finish the plate as it ended up feeling like a chore. 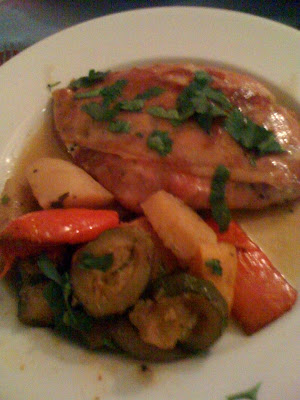 At this point it sort of felt like the meal was over but Jules still had one 'stage' to go which was one plate of roast vegetables and a portion of wheat pilaf.  It arrived just as I was finishing my main course so the timings were definitely a bit off as I just had to sit and watch Jules finish her meal.  These final dishes were also a little disappointing as they were pretty plain, not a great climax to the meal.  In fact the roast veg were exactly the same as the ones served with my main course so essentially it was a plate with two side dishes and no main.  Quite odd! 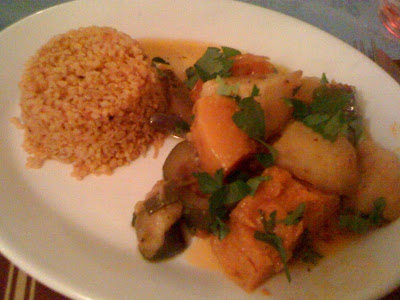 So all in all it was a real hit and miss affair.  Amazing starters, disappointing main courses and the timings of serving the mezethes were off.  Add on top of this that the restaurant refused to honour a Livingsocial voucher as advertised and it was a bit of a shame as it took the shine off what was a very friendly service.  The fantastic starters won't be enough to get us back through the door I'm afraid.

Posted by Bailey at 8:31 PM
Email ThisBlogThis!Share to TwitterShare to FacebookShare to Pinterest