Following a disastrous and unnecessary trip to the City Link depot in Trafford Park yesterday morning, Bailey and I decided we deserved a treat. Seeing as we were passing through Chorlton ANYWAY, we thought, what better way to fill our hungry tums than with a trip to the amazing Barbakan Delicatessen. 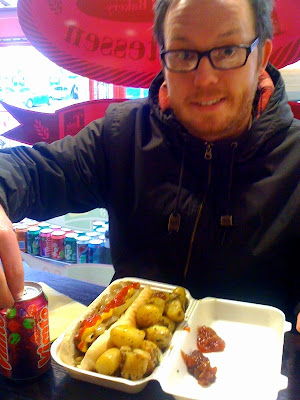 We've shopped at the Barbakan many a time for bread, picnic ingredients and fancy deli nosh to take away before, but we've never stopped in. Every time we go there, Bailey looks wistfully at the outside barbecue, filled with a variety of succulent and delicious-smelling sausages, burgers, potatoes and onions... finally his chance to eat something for once! 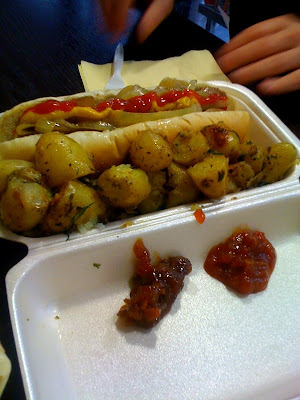 As per usual, despite it being pretty early, the place was absolutely packed out with people. The Barbakan is always packed. I have never been there when it is not packed, even on random weekdays. But don't let that put you off. The owners of the deli haven't scrimped on staff - yesterday there must have been about 15 very efficient people working away like friendly busy bees, and the ticket system they use works really well so you don't have to wait long for your tasty treats.

I decided to order a Veggie Sausage and Egg Sandwich (with ketchup) on Ciabatta from behind the counter inside the deli while Bailey was outside ordering from the Barbecue. My sarnie was ready by the time Bailey had been outside and gotten his sausage and we pulled up a pew at the deli's big inside table which meant we were right in the thick of all the hustle and bustle - a perfect spot for nosying and people watching. 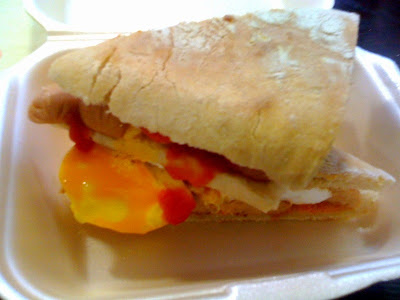 My sandwich, although at the end of the day just some veggie sausages and egg in a ciabatta still managed to blow my mind. It was amazing - just shows you what you can do with a few good ingredients! The veggie sausages (which I later found out are made by Tivall and can be purchased at the Barbakan) were delicious - really tasty and almost smoky, also really soft and light in texture. The egg was perfectly cooked and the ciabatta was the star of the dish. It was lovely bread, which of course you expect from the Barbakan as that's what they're mostly famous for, but it had also been really nicely toasted, I think in a paninni press, so was lovely and crispy on the outside. An outstanding breakfast sanger! 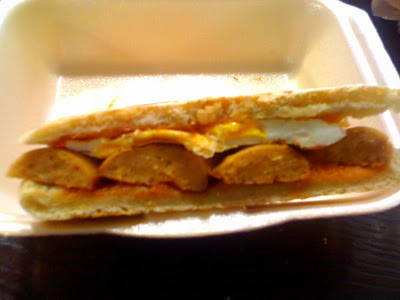 Bailey decided to go for a Lamb Sausage in a large white hot dog bun with a side of herby barbecued potatoes and nice blobs of corriander and sweet tomato chutnies. He said that, as expected, the doughy, fresh Barbakan bread was the best bit about his breakfast but the sausage was also amazing - really meaty, good quality and tasty. The mustard on the hot dog packed a mega punch and Bailey commented that it had done a good job of clearing out his sinuses! The potatoes were soft and nicely oily with lots of onions and herbs giving them a nice flavour. I think they could have done with a touch more seasoning but otherwise brill. A can of Vimto was the perfect Manchester-themed accompaniment to this tasty brunch. 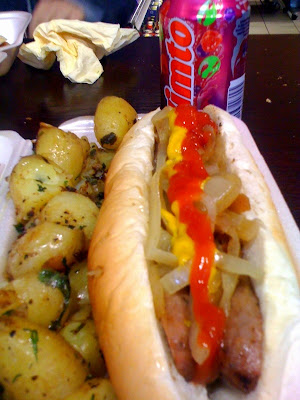 We had an ace time at the Barbakan and left in high spirits with full tums, a loaf of bread and a packet of Orecchiette pasta and our wallet only a tenner lighter! Bargain. The excellent food, great service and wonderful bustling atmosphere will have us returning there time and time again and giving us yet another reason to keep wishing we lived in Chorlton. Great stuff.

Posted by Jules at 3:33 PM
Email ThisBlogThis!Share to TwitterShare to FacebookShare to Pinterest