When choosing a restaurant to take my dad Roy Morris to, there are a few things to consider. He isn't a man who concerns himself with style over substance. He isn't a fashionista. I once witnessed him eat his Christmas dinner with a dessert spoon. Instead, we ask ourselves: will the eatery produce flavours he won't have tried before? Is it authentic? Is he likely to feel like we have discovered a hidden gem? If the answer to these questions is YES, then you are onto a winner. 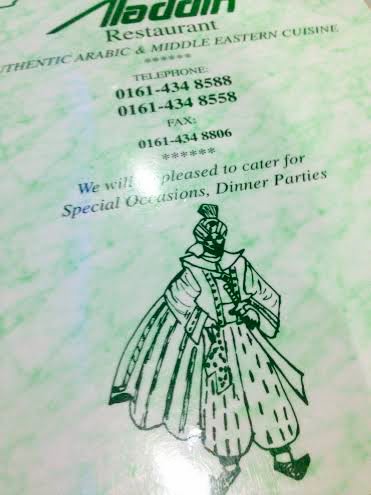 On this particular occasion it was the final time we would see my dad before his epic celebrating-retirement, 3-month jolly around Australasia and South East Asia. We settled on Aladdin, a popular Middle Eastern restaurant in Withington that had been recommended to us a number of times by different food and wine lovers. The wine lovers had done so because Aladdin is a BYO restaurant which I know is a big selling point for lots of people. It's also funny to think that Withington is actually a bit of a cheap eats culinary hot spot with two of my very favourite restaurants, Kyotoya and Dosa Xpress both tucked away there - Aladdin was the next one we wanted to try.

Middle Eastern is one of my favourite types of cuisine, so licking our lips we made our way into the restaurant... to be greeted by a man wearing a Krispy Kreme hat. Quite an unexpected sight to behold as you enter a building (unless it's Krispy Kreme, obviously). After this we were also puzzled to find the restaurant fairly quiet, especially for a Saturday night and in a place we'd been told we'd be fighting for a table. I can imagine on a busy night there'd be a really nice buzz about the place though. 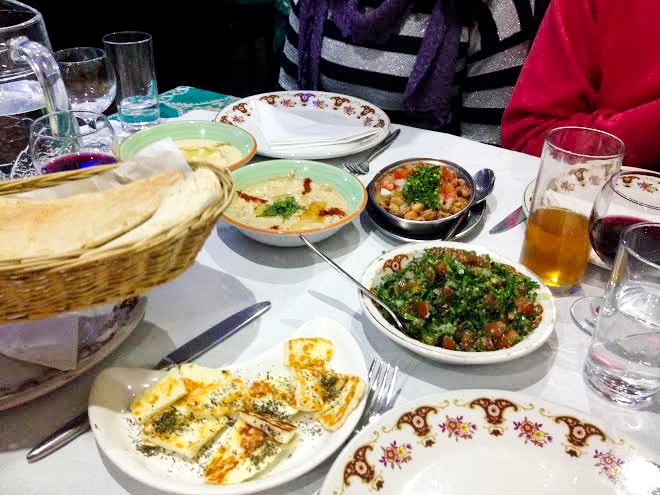 In my mind starters are always the best in Middle Eastern places so we made sure to start the evening off with a good selection. Unfortunately these were a bit disappointing and seemed to lack a certain je ne sais quoi - the Halloumi wasn't as well-done as I like it, the Tabouleh and Ful Medamas were both a bit bland and the Houmous, despite looking smooth and gorgeous, was just OK when I compared it to the amazing version my friends Manchester Foodies had made me a couple of weeks earlier. I did however enjoy the Baba Ghannouj and the fact that they kept the hot, doughy pittas coming and coming. 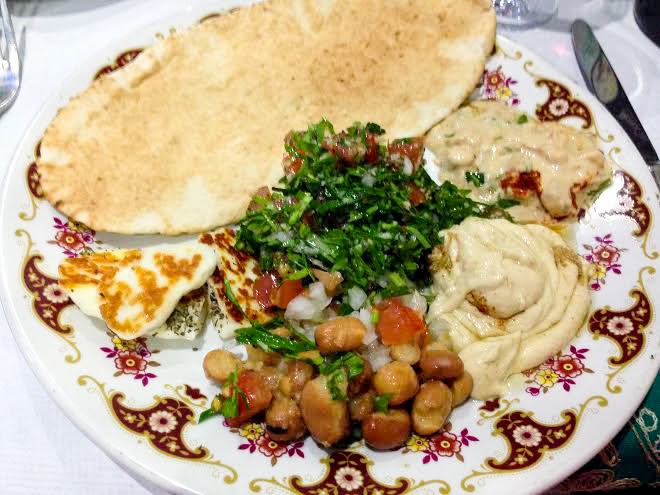 Now then, time for mains and I had ordered the a fillet of salmon cooked on charcoal. NOW WE'RE TALKING, this was absolutely one of the tastiest bits of salmon I've ever had - the char on it was amazing and the vat of sauce I was given to pour over it was just divine. Despite the fact it was pretty spicy with a building heat, I couldn't stop adding it to my food and when I'd finished I even started dipping pittas in it, powering through even though my nose was streaming. You know it's a good sauce when you keep eating it despite it causing you a considerable amount of discomfort. I loved the accompanying salad and slightly oily rice too. 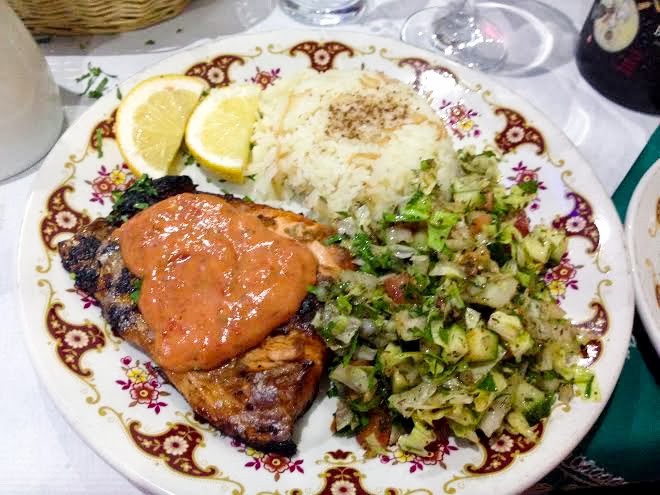 The tahini sauce on Bailey's Shaworma was equally as exciting as mine and the whole thing tasted good altogether but he was surprised to find the spit-roasted meat a little dry and chewy. While I can't quite recall what my parents had I think they were both happy enough. 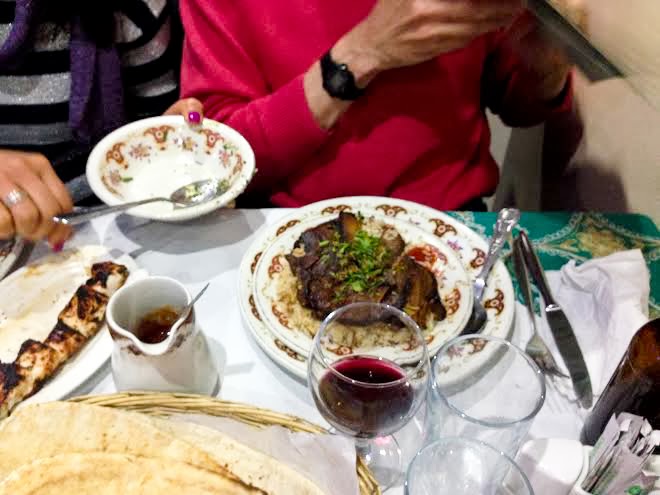 We were tempted to try a bit of Baklava for dessert but settled on a nice hot drink instead. I asked the waiter what the mint tea was like - I was hoping to relive my most favourite tea-related Morocco moments with a teapot bursting with fresh mint and sweet tea goodness, but was told it was just a plain old mint tea bag. No thanks. Instead we went for coffee. The best Turkish Coffee I've had was at Olive & Thyme in Chorlton because we loved the ceremonious presentation and the chunks of Turkish delight. Aladdin's Cardamom Coffee wasn't quite as exciting but did the job of stopping my dad falling asleep while driving home over the Snake Pass. 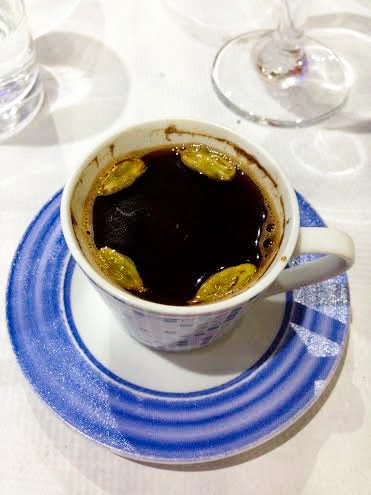 I can see why Aladdin is popular. It's a bit of an old-time gem, we were well looked after and left full-bellied. Despite the quietness I got the impression that the people that were there were die-hard Aladdin fans who go every weekend; I wouldn't blame them as it's a good little local and if I lived in Withington I too would probably grab a bottle out of the wine rack and pop over when I couldn't be arsed to cook. However, was it good enough for me to keep coming over from Levy? I'm not so sure - there are a few Middle Eastern places in Chorlton we haven't tried yet and when passing through Withington Kyotoya is pretty hard to resist. The burning question though - did it get the Roy Morris seal of approval? To quote the man, "Exciting flavours, why don't we have a place like this in Sheffield?"* Cheers Roy.

*I think Roy had forgotten that Sheffield has an excellent restaurant of a similar ilk called Zeugma!

Posted by Jules at 12:07 PM
Email ThisBlogThis!Share to TwitterShare to FacebookShare to Pinterest