After the gut-busting highs of the Christmas feasting, Bailey and I were feeling overweight and gross. What was needed was a good, hearty and healthy meal. A quick call for recommendations on Twitter for the best East Asian eateries would surely do it... the venue we settled on? Seoul Kimchi, a wee Korean joint I first heard of through Hungry Hoss way back in 2012. Shameful and tragic that we've wanted to go for so long and never made it, not least because it's a stone's throw away from Bailey's place of work! Better late than never I suppose. 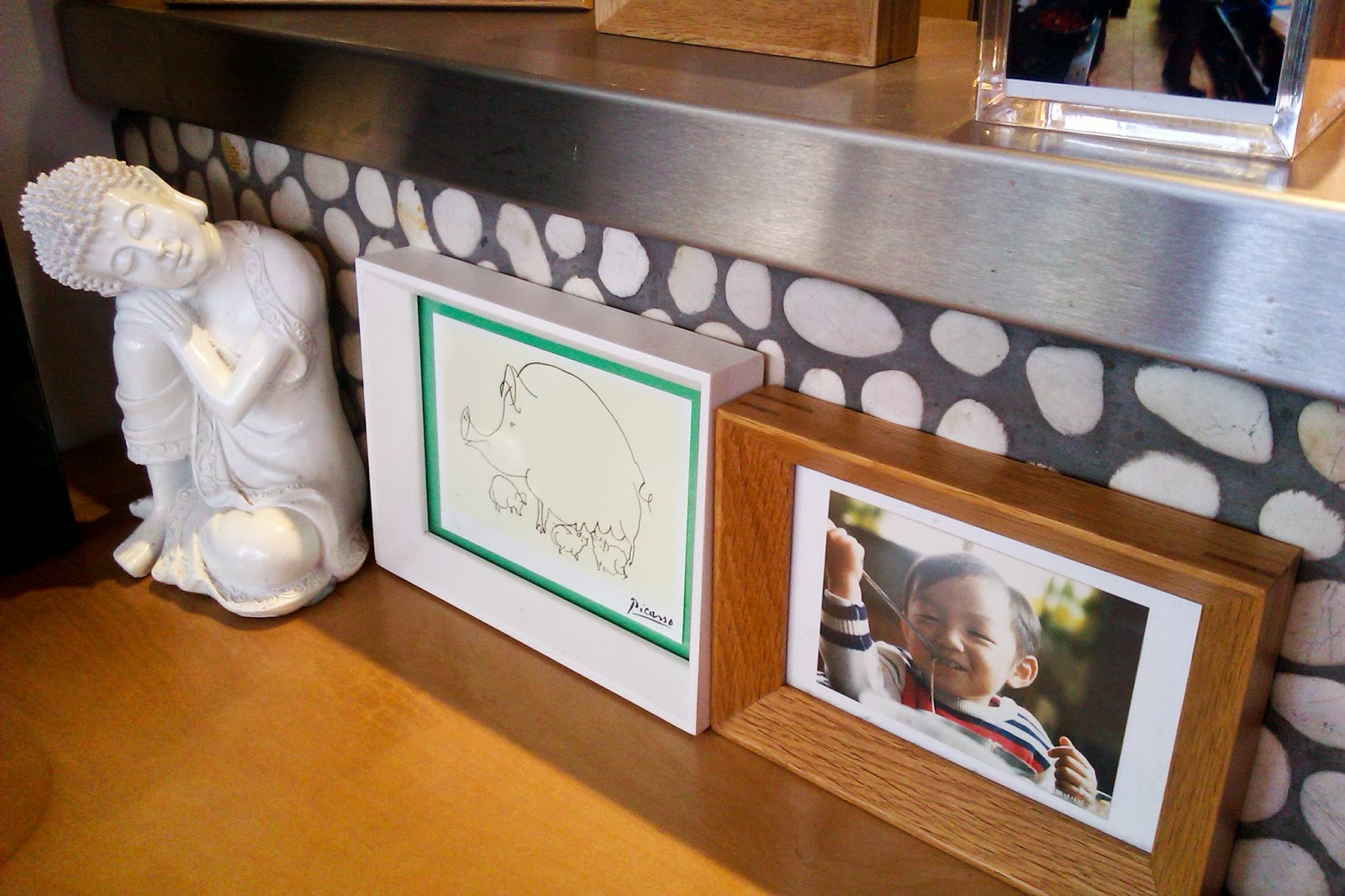 We know very little about Korean food apart from that it's delicious and healthy - perfect for the post-Christmas detox. Our only point of comparison is Baekdu, which we've had several successful visits to and is one of our firm favourite cheap eat locales. This did mean that we were constantly comparing various bits and bobs to ones we'd had at Baekdu but we by no means claim to be experts on Korean food. 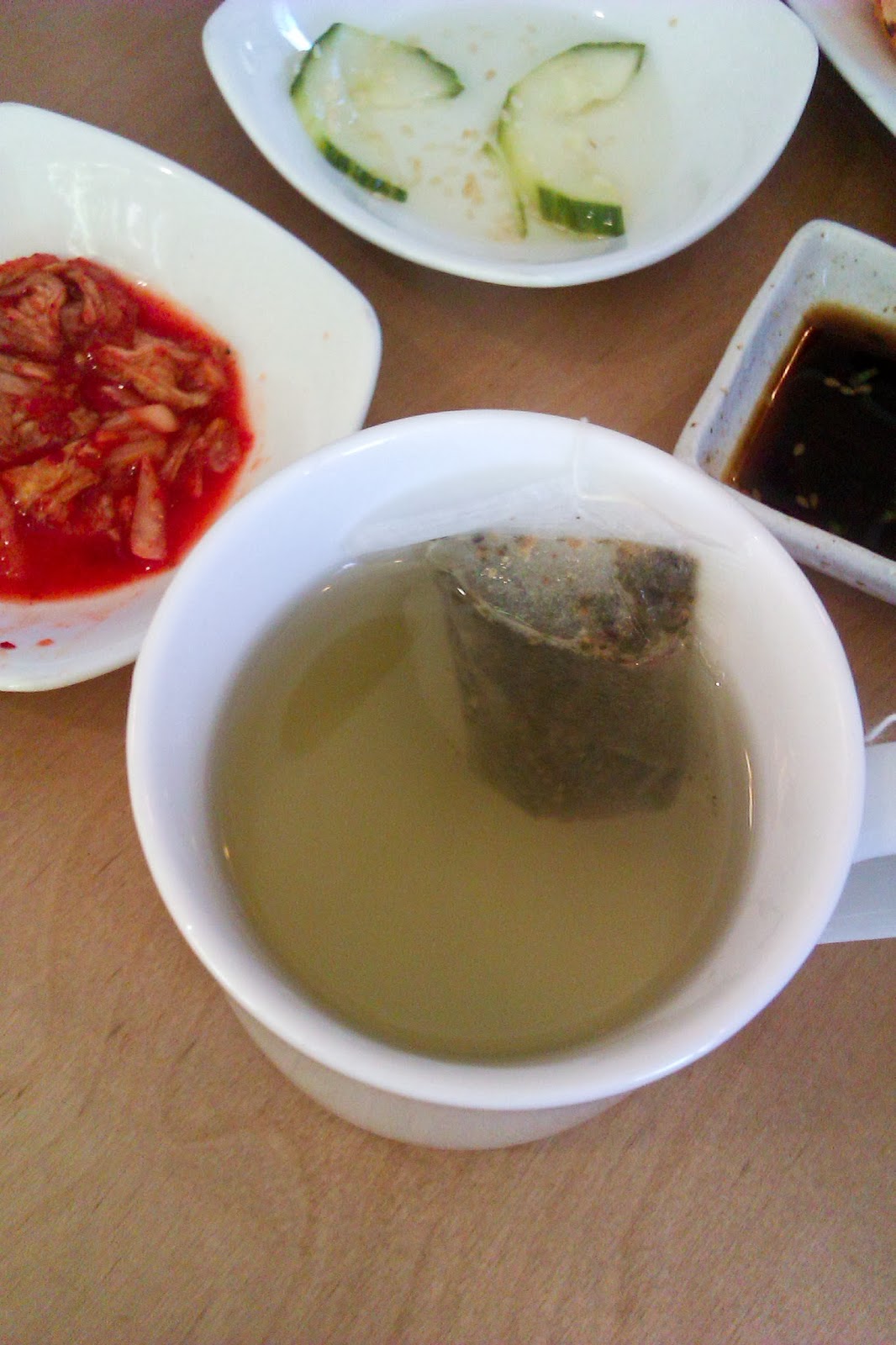 Our meal started off with a calming and simple brown rice tea accompanied by a few little bowls of Banchan. As I say we are simple fools when it comes to Korean food as we later found out these are condiments to flavour your foods with but we just ate them. The kimchi was a little sour for me but I loved the pickled cucumbers. At this point we photographed our food and played our favourite Twitter game of 'guess where we are...' which good old Hoss (as usual) guessed correctly. Well you've heard of the power of Twitter and the old saying "speak of the devil and he doth appear" but rarely in these situations do you expect the man himself to turn up behind you! Turns out he was just passing and popped in to say hi and we very much enjoyed his fleeting visit. 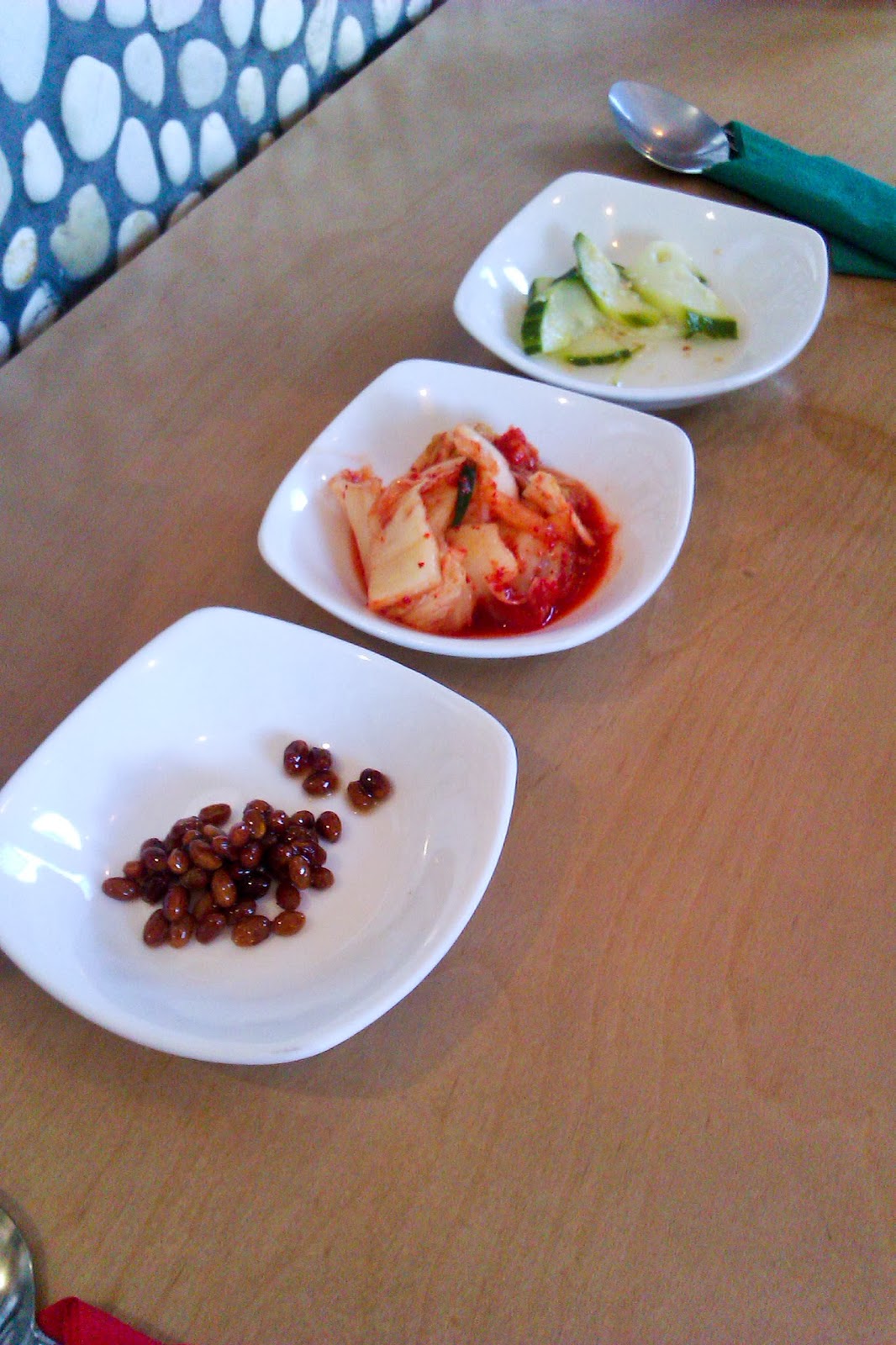 Starters were Kimchi Pancake and a couple of soups. Bailey was delighted with his pancake - lighter and sweeter than the one we had at Baekdu but just as enjoyable. 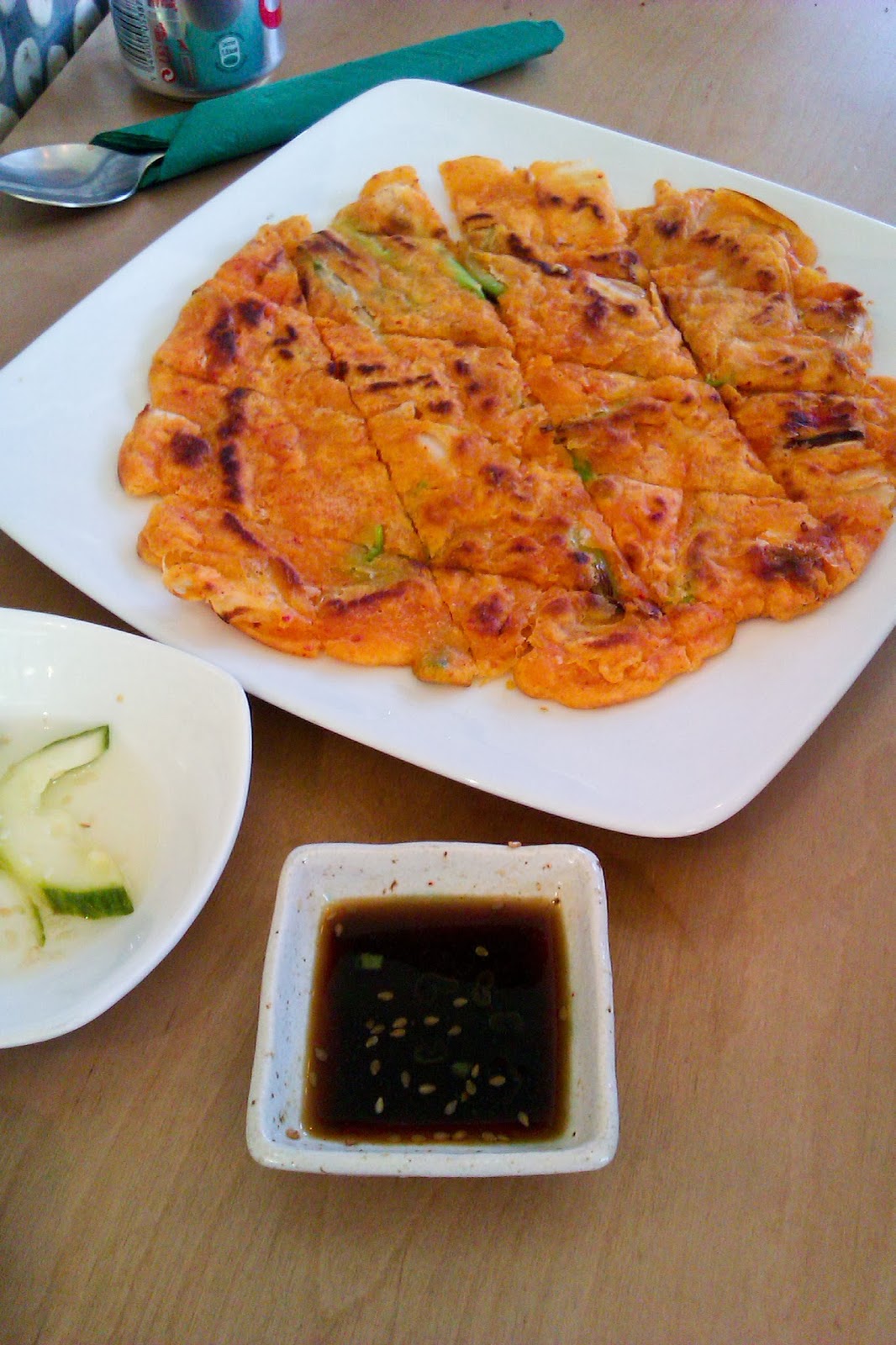 Bailey was none too impressed by the soup that came with his lunch deal so I ended up drinking them both. A very tasty Miso Soup and whatever Bailey's was I liked too. Score. 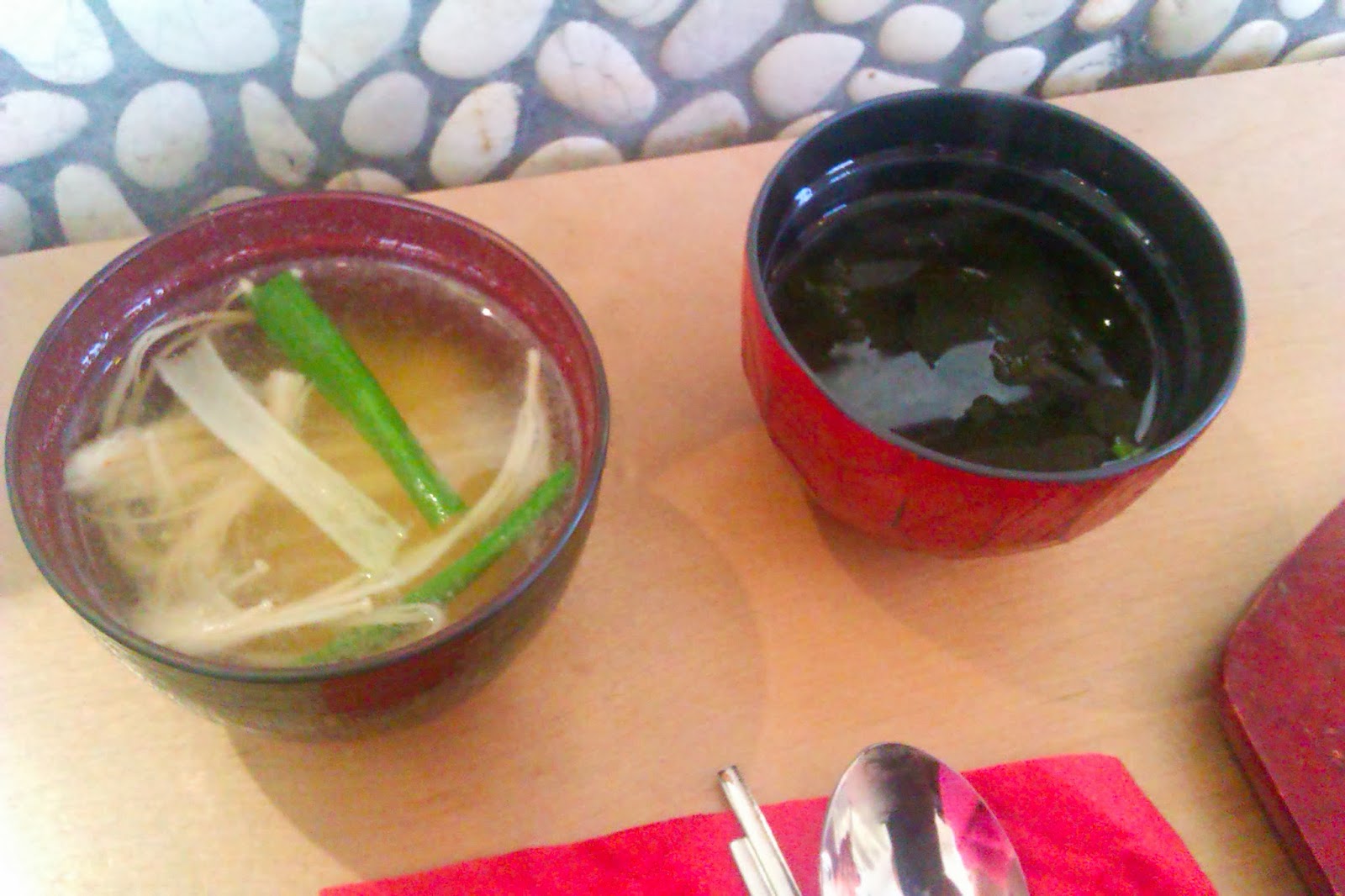 Main courses were on their way next and I was very excited to be losing my Bibimbap virginity, although I'd tried a similar eggy rice dish served in a Dolsot cooking pot at Baekdu, so knew I was in for a treat... I love the way rice that has been touching the sides of a piping hot pot goes all lovely and crunchy. 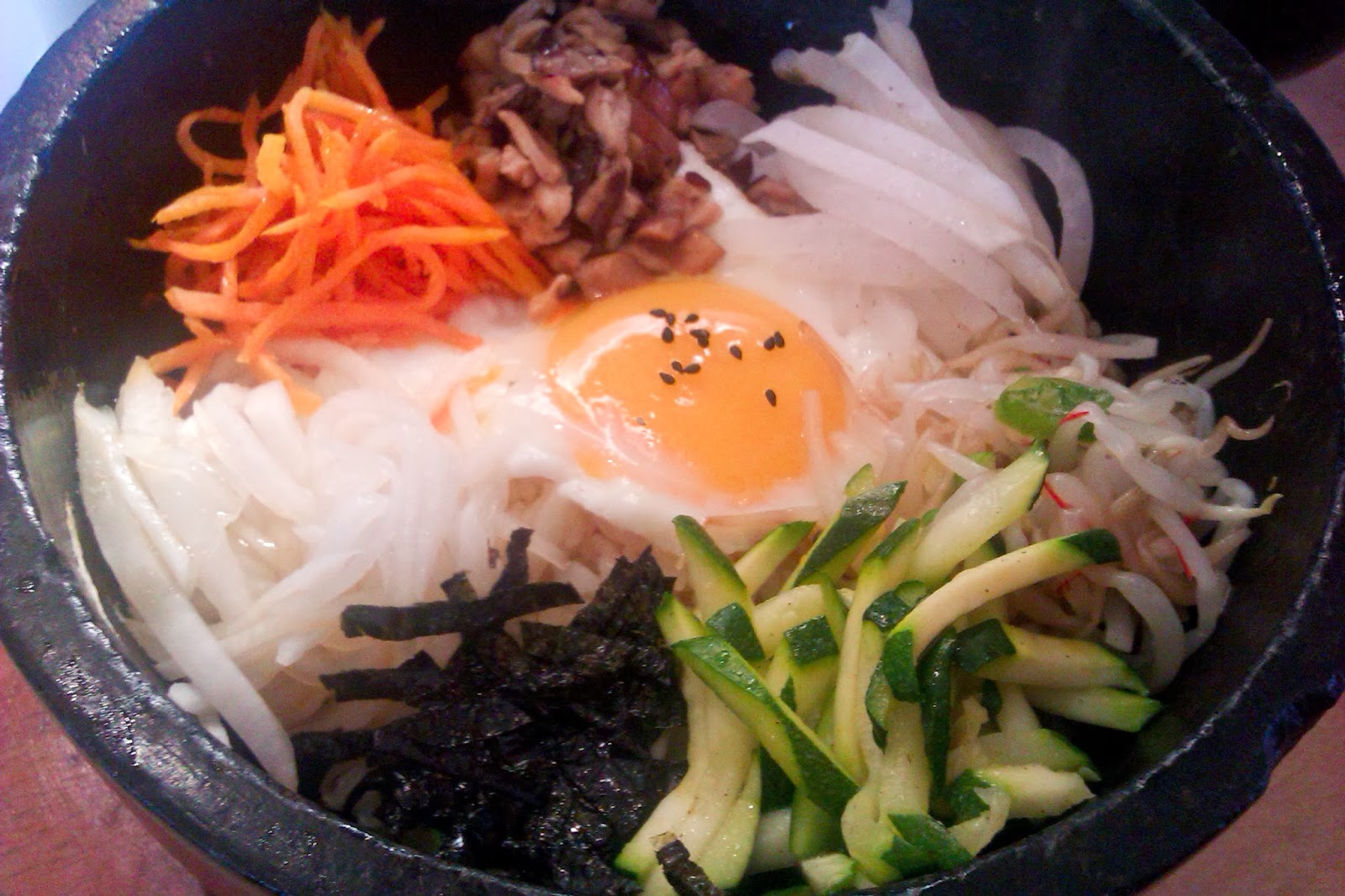 At first I was a bit worried that my Vegetable Bibimbap seemed a little boring but once I'd mixed it all together it was really lovely, especially with the egg yolk running through it the nice crunchy veggies. 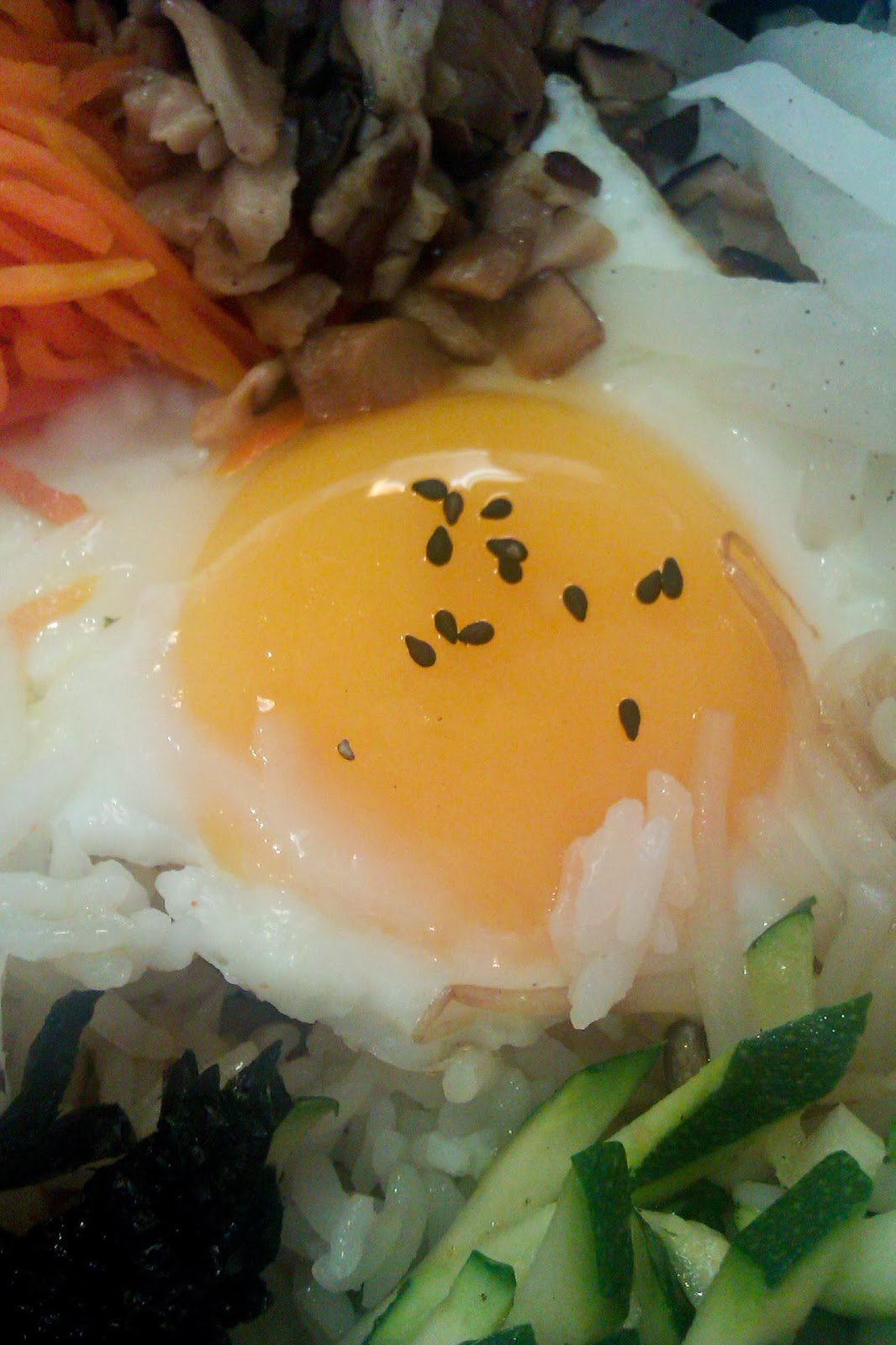 Bailey had ordered the Chicken Bulgogi with Steamed Rice and was very pleased when it arrived sizzling loudly and didn't stop sizzling for a good five minutes. The flavours of the dish were clean and simple but with a creeping heat. A great dish for a lunchtime. 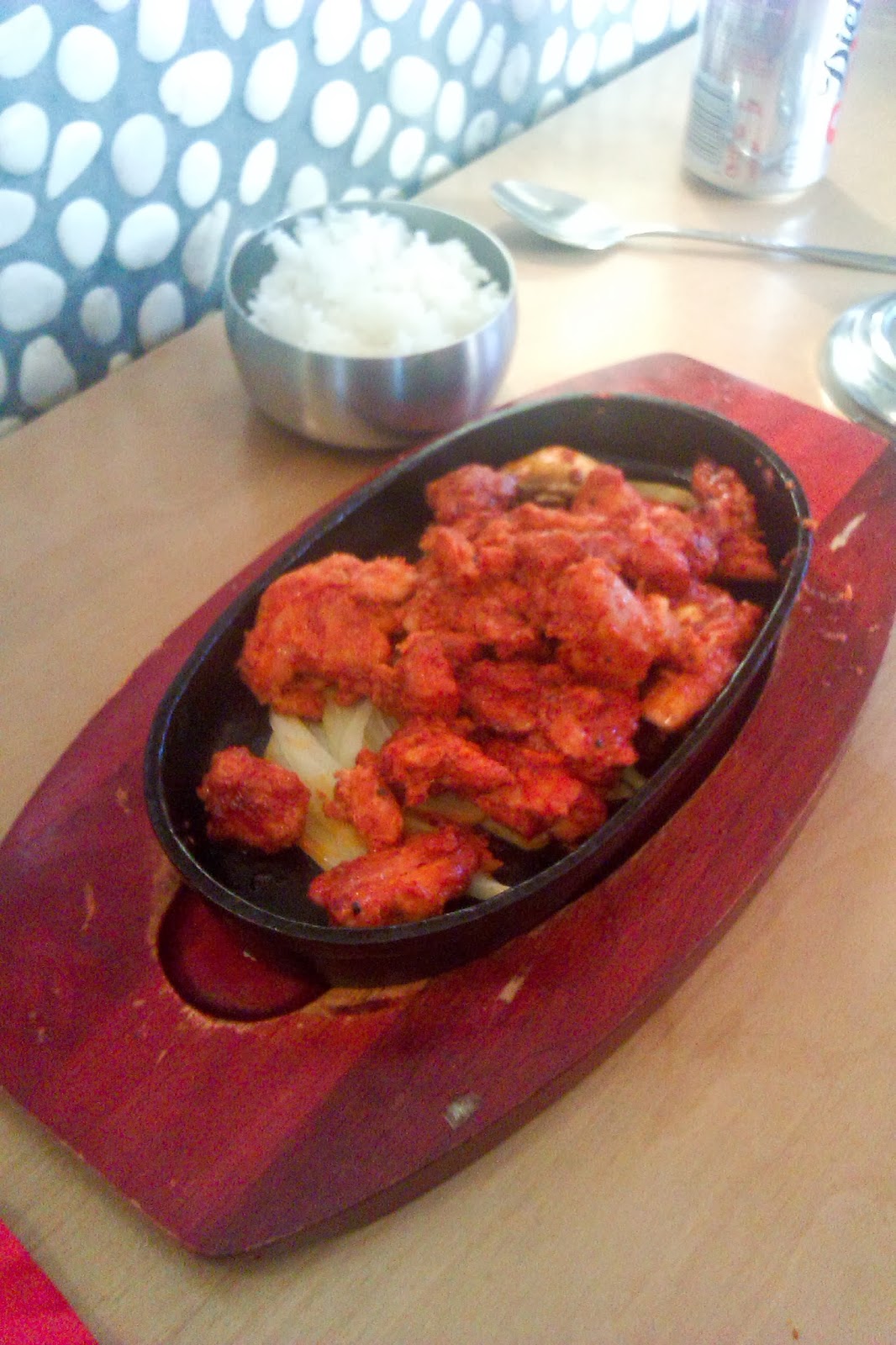 I had very few complaints except that I found the metal chopsticks too heavy for my tiny stupid Western fingers. However, Bailey had a gripe with the disorganised front of house serving area looking "like a student's bedroom", with things piled on top of each other in a big mess. He described this as "an unnecessary minus point for them". Sort it out! 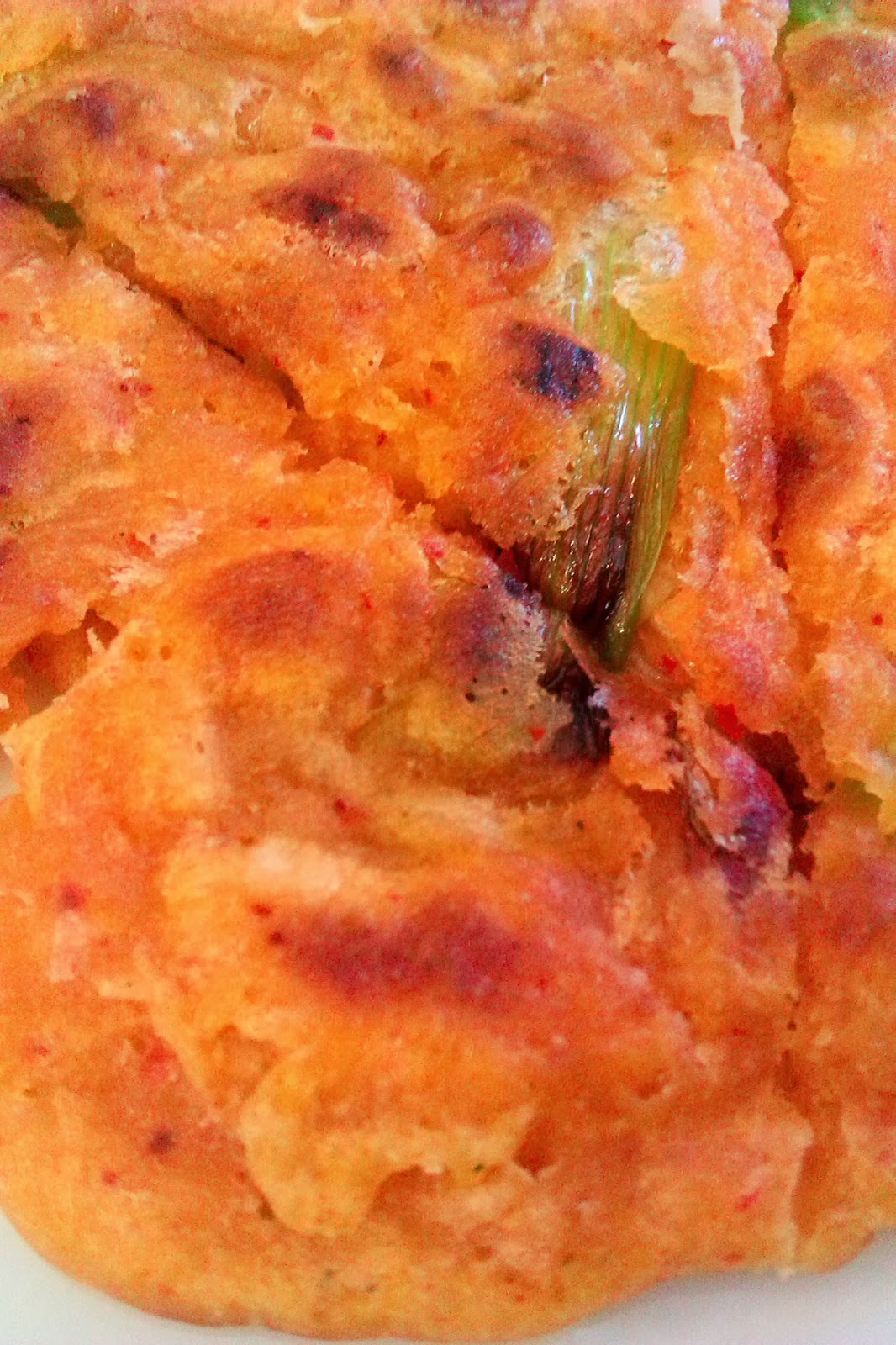 Still, this didn't stop the service from being decent. It's a great little café and probably more charming than Bakedu although the teeny-tiny nature of the place does mean you get the odd nudge and elbow here and there. It also made me really want to get a Dolsot cooking pot and learn to make Korean food. We will definitely return for a relaxed lunch but not sure if we'd consider it for a dinner time venue. Yet another string to Manchester's cheap eats bow - try it out for a healthy and inexpensive meal. 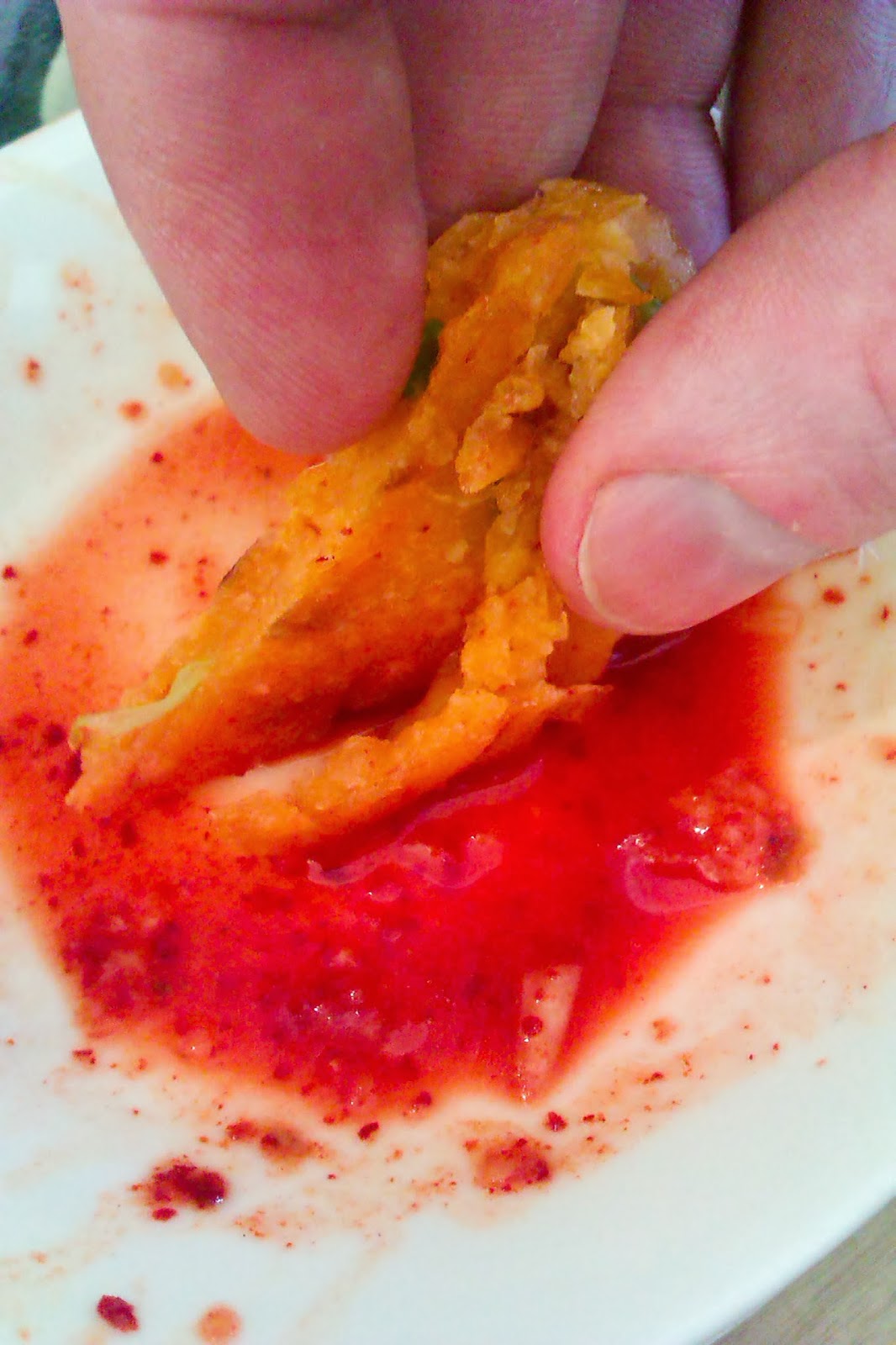 Posted by Jules at 7:22 PM
Email ThisBlogThis!Share to TwitterShare to FacebookShare to Pinterest