Bailey and I recently came across a survey where people were asked which websites they use to check the quality of a restaurant when deciding whether or not to visit. We almost fell off our chairs to see that, of the people surveyed, 75% said their first port of call would be Trip Advisor. Trip Advisor of all sites! This surprised us as we have always been so mistrusting of Trip Advisor, believing it to only be used by picky idiots and people trying to get their own back on places for not giving them a free meal. Although written some time ago (and the stats will have no doubt changed by now), I feel former blogger Mangechester's piece entitled 'Trip Advisor does Manchester' illustrates the point perfectly that the site should be taken with a pinch of salt.

We were even more aghast to read that the percentage of people surveyed who use Twitter for restaurant recommendations is a whopping 0%! I mean, it would be naive of us to expect everyone who's not as obsessed with food as we are to spend as much time talking about eating out on Twitter but I think people are really missing out by not using this excellent restaurants research resource! We find it a great way of finding out about places to eat from like-minded people whose opinions we trust. I think the restaurants themselves are becoming more and more aware of the power of Twitter, with some places (Mughli, Solita, Parker's Arms spring to mind) using it very cleverly and successfully.

Another restaurant that clearly values Twitter as a customer service tool is Azzurro in West Didsbury. When asking for Twitter recommendations for a 'cosy, family-run Italian' for my mum to take Bailey to for his birthday meal, this place was suggested time and time again... which is funny considering it is ranked Manchester's 587th restaurant on Trip Advisor, coming in behind Frankie & Benny's and Taco Bell. We actually booked our table via tweet which led to the kind manager of the restauraunt giving us a glass of prosecco on the house to say thanks for chatting to them on Twitter. Thanks Azzurro... even though this single glass was enough to make my mum rather merry (she's a cheap date). 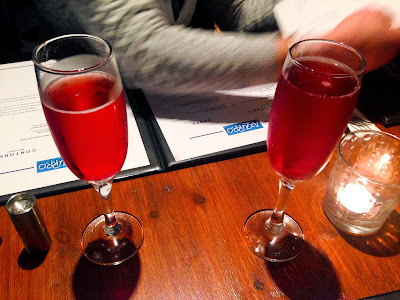 Now regular readers will know that me and Bailey have an undying love for old school Italian restaurants with cheesy interiors. Azzurro is not like that at all but if you're looking for cosiness, they do that in bagfuls. We stepped in from the biting cold to find a lovely little restaurant, packed with happy punters and with a fantastic Friday night atmosphere.

The menu looked much nicer than in the old school Italian restaurants and perfect for me and mum as we like a nice bit of healthy food plus there were loads of seafood specials for pescatarians like me. Bailey's ideal Italian restaurant scenario is eating himself into a calzone coma but there was plenty of choice for him too. 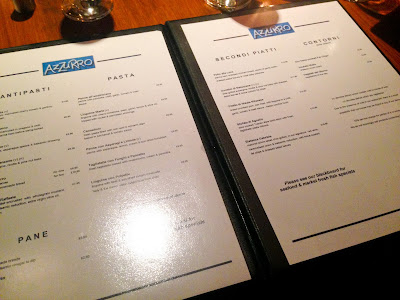 For our starters me and Mum couldn't decide so shared a portion of Fresh Mussels and a Caprino al Forno baked goat's cheese with nice crunchy asparagus. Both were great little starters. 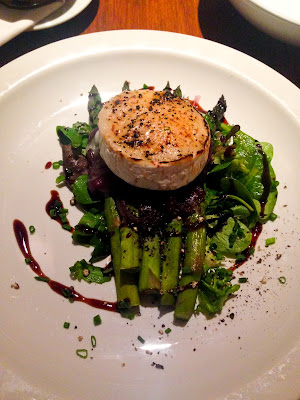 The mussels especially were some of the best I've ever had (and I used to live near Lille aka Mussels-ville!) and the chilli sauce they were in was so delightful that we spooned it all up. 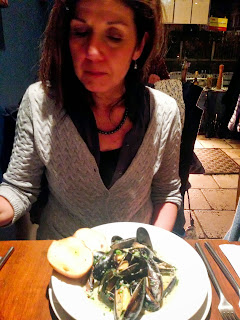 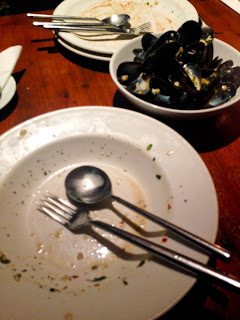 Bailey's socks weren't as blown off by the baked mozzerella as he felt it was a bit insubstantial and unremarkable. Fortunately he had ordered some bread which made it a bit more exciting. The bread at Azzurro is really good. 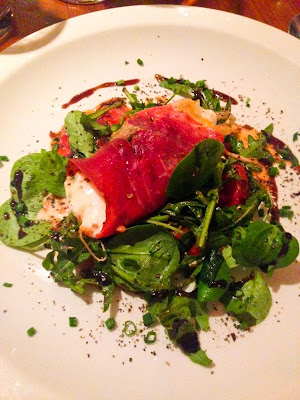 I was very excited about my main course of Seafood Linguine as I'd already been having a really massive nosy at the people at the next table eating this. It was really tasty with some great seafood. It was really nice with the generously 'parmesanned' Insalata Mixta that I ordered too. 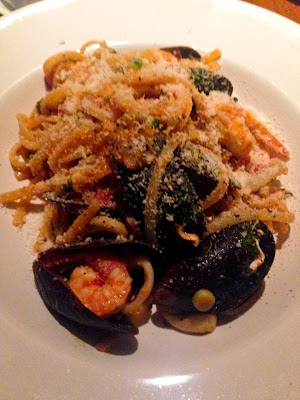 Bailey's Canneloni was surely one of the prettiest plates of canneloni we've seen. It still managed to be hearty with plenty of sauce and cheese. Bailey was a happy birthday boy. 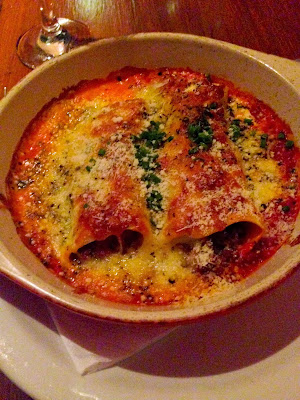 We skipped desserts as we had a nice bit of pannetone to eat at home but we did still find time for a nice chat with our great waitresses and I should mention that service had been bang on all night.

From our trip to Azzurro we learnt an important lesson, you don't need to look for the cheesiest Italian restaurant with candles stuck in wine bottles and faded portraits of the Coliseum to find delicious, hearty and homely Italian food cooked with love. This was the best Italian meal we've had in Manchester so far and would definitely return. I'm really glad we have so many clever Twitter followers who tell us about the great places to eat - thanks trusty Twitter! 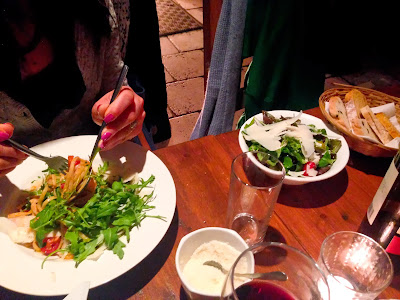 Posted by Jules at 5:34 PM
Email ThisBlogThis!Share to TwitterShare to FacebookShare to Pinterest