Half-term holidays are always a great time for me to catch up on all my housey jobs, including of course getting some proper baking done. However, with there only being me and Bailey around here it always seems a shame to bake up a storm if it's not going to get eaten. This is why I like being joined by super dooper young ladies who enjoy baking as much as I do but who have plenty of cake-loving friends and family to feed. 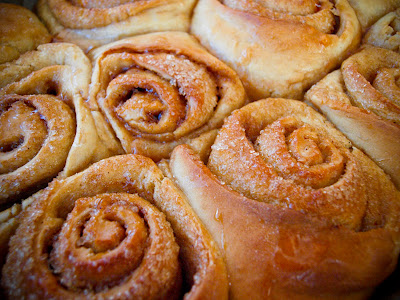 So on Tuesday I had a baking date with the lovely Eilis. Unfortunately fate was unkind to us and Kat's holidays fell on a different week to ours meaning she couldn't join us (no matter, we decided we would whip her up a batch of Oreo and Marshmallow Chocolate Cupcakes as a belated birthday gift). As I know Eilis is already an expert baker and she doesn't need me around to make amazing cakes, so apart from the aforementioned cupcakes, I thought we could turn to something a little more adventurous: bread. On the menu for the day was a Rosemary Focaccia, Jamie Oliver's Pizza and Cinnamon Buns from the Primrose Bakery. 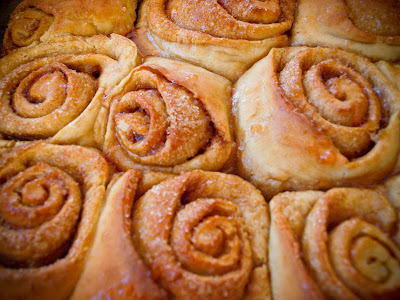 Ever since the day I received my Primrose Bakery Book I've been waiting for an excuse to whip up the Cinnamon Buns - not only do they sound absolutely delicious but the ladies from Primrose clearly think these bad boys are a big deal as they've dedicated something like four pages out of the book to mouthwatering pictures of them being rolled up in their cinnamonny deliciousness. My first taste of a similar cinnamon treat at And The Dish Ran Away With The Spoon only sealed the deal - these beauties had to be made. 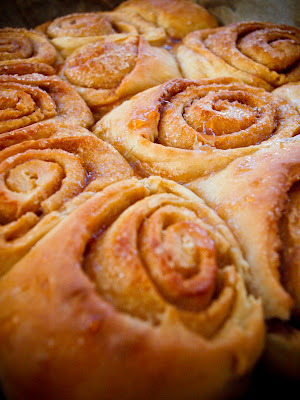 Baking the Cinnamon Buns was lots of fun. Not only do you get to make a really cool, messy sticky dough (which Eilis kneaded expertly, using up probably most of her elbow grease supplies in the process), you then get to roll that dough into a long thin sausage shape with your bare hands. As Eilis was my guest I know I should have let her roll the sausage up all by herself but I just had to join in, it looked so much fun. 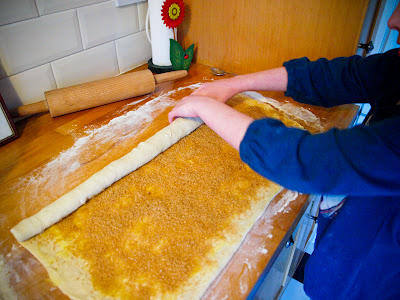 Unfortunately an error on my part - namely mistaking a bag of demerera sugar in the pantry for a bag of dark brown sugar - we didn't have quite the right ingredients but maybe that would be our selling point for our super special Cinnamon Buns with a bit of extra demerera crunch. 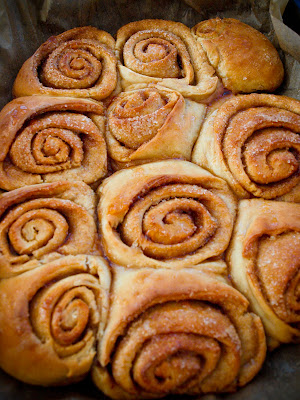 As always baking with Eilis was a pleasure and I hope that her family and friends enjoyed their Cinnamon Buns! They certainly looked and smelled pretty awesome! 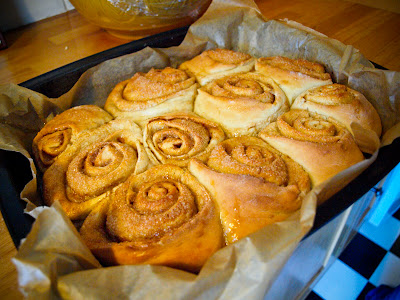 Preheat the oven to gas mark 4 / 180 degrees C and prepare a large baking tray by lining with baking paper. Add the lukewarm water to a jug and add the yeast plus one of the tablespoons of sugar. Stir well and put to one side. 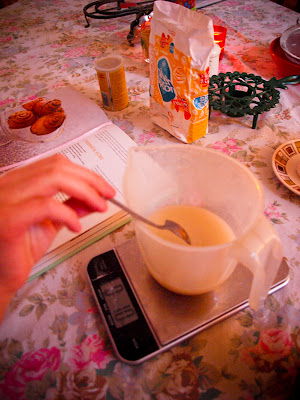 Meanwhile, take a large mixing bowl and sift in the flour. Also sift in the salt and the rest of the sugar. 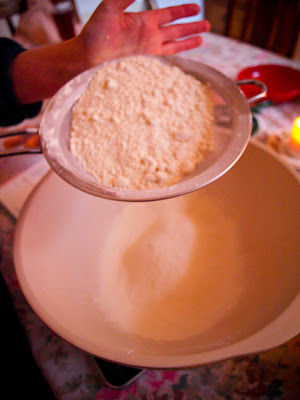 Take the butter and add to the mixing bowl and stir well until combined. This may take a bit of the old elbow grease. 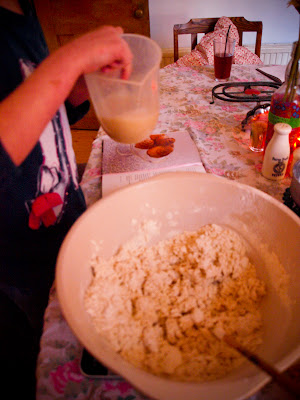 In a saucepan, heat the milk up until just hot to the touch (don't burn it like I did then have to do it all over again!) and add to the mixing bowl gradually, stirring after each addition. Also add the yeasty mixture from the jug and stir. This will make the sticky, messy dough I was on about. 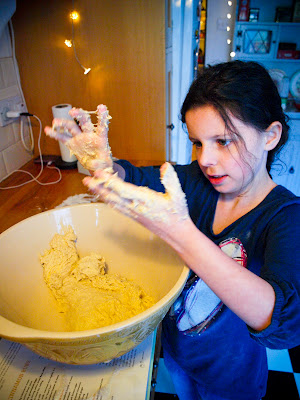 Flour a work surface and turn the dough out onto it. Flour your hands up also and knead the dough for five minutes before leaving it to rest for another 10 minutes. 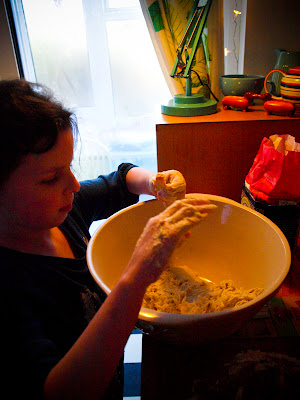 Meanwhile, you can make the cinnamony filling by mixing the sugar, cinnamon, ginger and nutmeg together in a bowl. 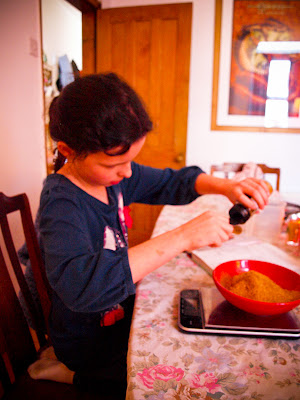 After the 10 minutes has passed, roll the dough out into a big, thin rectangle. 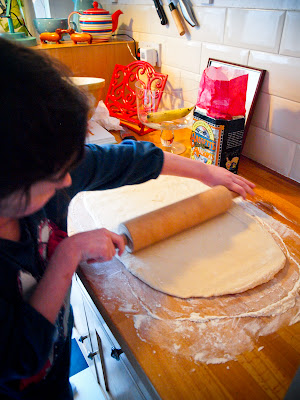 Smother the top of the dough rectangle with a load of melted butter. 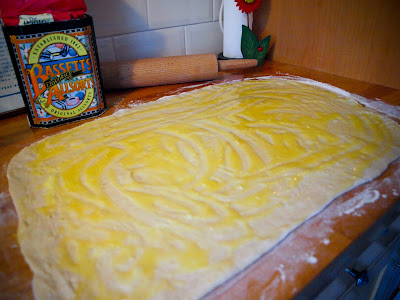 Then sprinkle the sugar and cinnamon mix evenly over the dough to the corners. 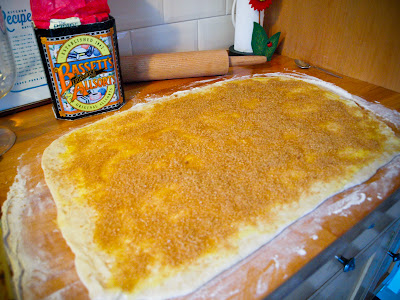 Then, starting from the top of the rectangle, roll the dough down towards you to make a long sausage. Lots of fun! Once the sausage is made and all the filling is safely enclosed, dab the bottom edge with water to secure the edge of the dough to itself.

Then, cut the dough into 5cm lengths making little swirly rolls. Place on the baking tray and leave to rise again for half an hour or so before putting in the oven for around 30 minutes or until golden brown. 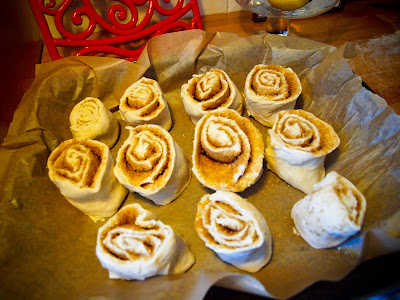 While the cinnamon buns are in the oven, mix the gooseberry jelly and water together for the glaze. 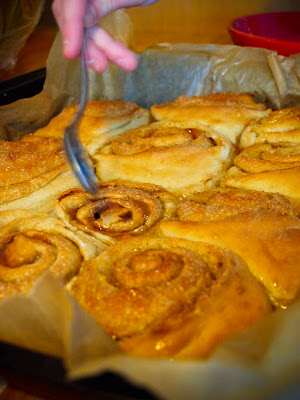 When the buns are fresh out of the oven, spoon the glaze over the top of the buns. A breakfast treat, or for any time really! 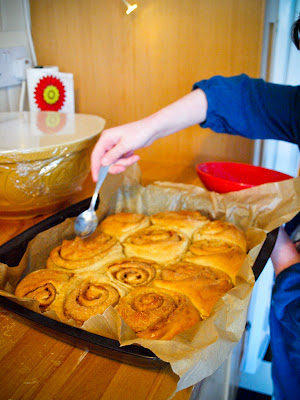 Posted by Jules at 7:33 PM
Email ThisBlogThis!Share to TwitterShare to FacebookShare to Pinterest