My family. We are a crazy bunch. Individually we are all OK but put us all together and we can make a right old racket. Therefore when you find a pub that serves decent food, is in the middle of us (Manchester) and them (Sheffield), that is in an awesome building and no one in said pub seems to mind us making a load of noise on a Sunday lunchtime, you are onto a real winner in my book. 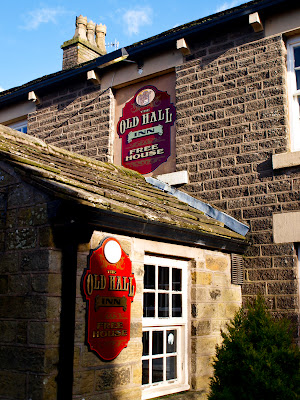 We heard about this place - namely The Old Hall Inn, Chinley - from fellow blogger Bacon on the Beech (following a Twitter plea for a pub within easy reach of both Sheffield and Manchester) and I can't thank him enough for this recommendation which was so popular with the family that my Uncle Dave was on about checking himself into the hotel upstairs for the night. 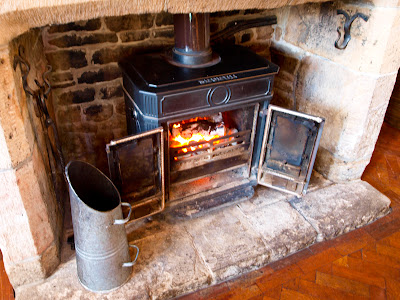 Bailey and I were quite pleased to arrive first as this gave us the time to get settled for a moment of quiet time in one of the nicest (and yet also one of the weirdest) dining rooms we have ever eaten in. Exposed brick and beams, wrought iron light fittings, oversized darkwood dining tables... we felt like we were in the Medieval times. 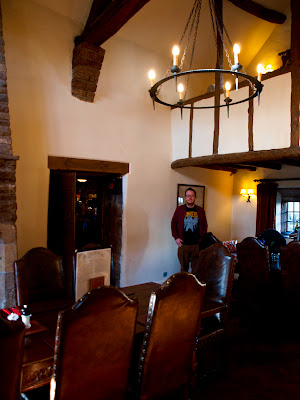 Drinkswise, The Old Hall Inn has got it nailed. Firstly, I was driving and was therefore very pleased to find on offer a selection of artisan teas from The Mighty Leaf Tea Company - perfect for a Sunday afternoon of relaxation. Bailey was also very impressed, as was my dad on his arrival, with the selection of reassuringly local real ales. 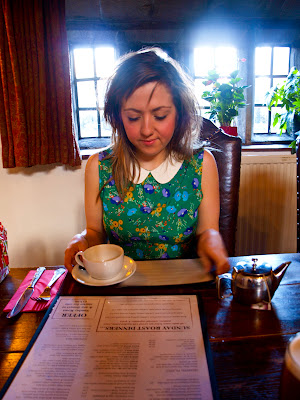 The Sunday lunch offer of roast plus starter/dessert for £13.50 also couldn't have gone down any better with the folks, although my mum proved the 'don't ask don't get' theory by getting the staff to agree to letting her have any main of her choice instead of the roast as part of the offer. Nice bargaining mum. 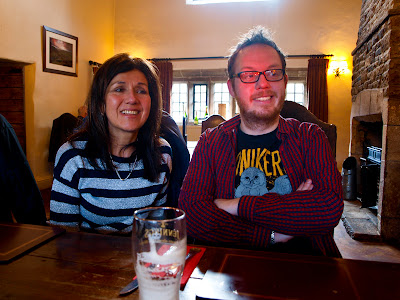 Bailey and I decided to share a starter of Whitebait which came with a homemade tartare sauce. Having been to Livebait and eaten some of the best seafood we had ever tasted just the night before, our standards were high... well these crunchy and tasty little whitebaits were very good, perfect for popping in the mouth. Bailey doesn't like tartare sauce but he mopped this up. I loved the big chunks of pickles in the sauce which was another reason Bailey liked it - as he was able to avoid them. 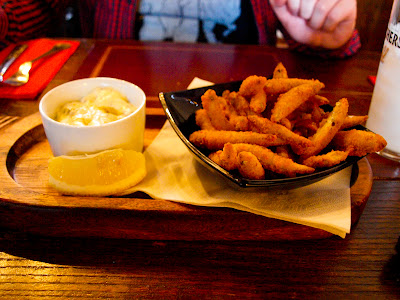 The starter everyone else around the table went for from the specials menu looked ace and I was quite jealous - Mackerel with German Potato Salad. 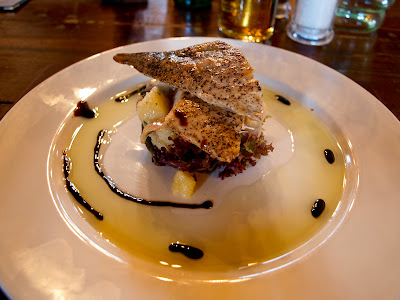 Main course was an easy decision for me - I loved the sound of the Smoked Haddock Welsh Rarebit from the specials menu. Again this was going to be measured up against the most lovely delicate sea bass I'd eaten at Livebait the night before. First impressions weren't fabulous as I can't say it was the most delightful looking plate of food - maybe another something to add a splash of colour would have been good - but once I got stuck in I really enjoyed the dish. This was a proper good bit of pub grub - nice big bit of haddock with strong flavours from the rarebit topping and delicious mustardy sauce. The mash was brilliant and the beans perfectly al dente. 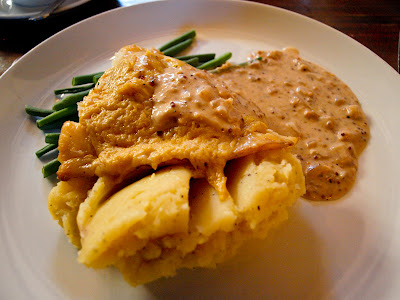 The other mains around the table seemed to go down pretty well too. My mum offended my dad by announcing that the Vegetable Lasagna was far better than the version he makes at home (but then redeemed herself by saying "I never thought I would taste a lasagna as delicious as Roy's") and the roasts seemed to be quite good, the lamb described by Bailey as a "solid Sunday roast" although according to my dad the meat was "a little dry". I tasted a bit of my uncle's cauliflower cheese which was very nice and cheesy. 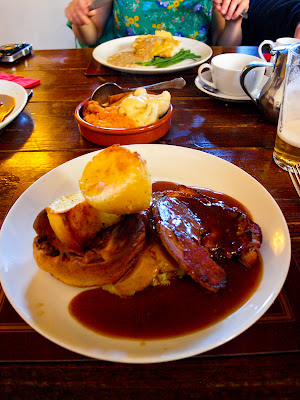 Finally who could resist a pud that sounded as delicious as Bailey's Bread and Butter Pudding (cue hilarious gags around the table as it being BAILEY's)? Both me, Bailey and my mum and dad went for this bad boy. For some reason I haven't been able to stop thinking about bread and butter pudding since someone at my work used the idiom "my bread and butter" (shows how much I think about food) which explains why this was my second bread and butter pudding of the weekend - the first being at The OxNoble on the Friday night. This was quite different to the one I'd had 2 days earlier but just as lovely - the bread was moist and soft and scattered with juicy, plump raisins. The lack of Bailey's flavour present in the dish did cause a disagreement at the table, with some (me) saying if you can't taste it, take it out of the name of the dish and others saying they believed the Bailey's must be what made it taste so good. I still think I am right. My uncle's Sticky Toffee Pudding was also very much enjoyed but I didn't love it as much as the one Bailey had had at the aforementioned OxNoble meal. 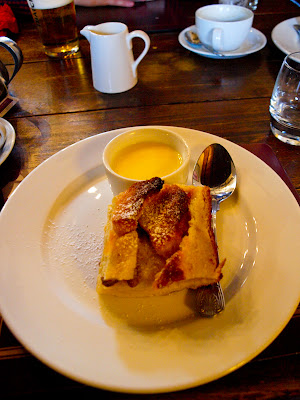 Service throughout the meal was very good and I must say the staff did very well to put up with us and certain members of the family in conversations like... "Would you like any sauces to go with your meal?" "No thanks" ... 4 seconds later... "WHY HAVE THEY NOT BROUGHT ME ANY MUSTARD?" There was even a very lovely Spanish speaking member of staff who, on hearing my mum and auntie speaking the lingo, came over and told us all about his adventures in South America. 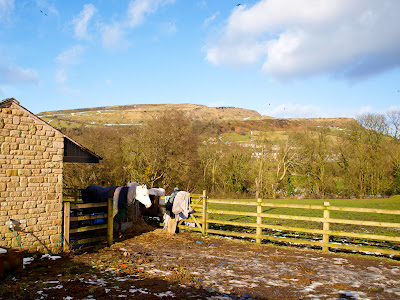 A very lovely time was had by all the family at The Old Hall Inn and I have to mention what a brilliant location it is for a pub. Despite being a mere 45 minute drive from our home in Levy, we felt like we had been out to the 'proper' countryside, had a scenic drive, breathed in a bit of fresh air and even spotted some horses out back of the pub. I imagine this would be a brilliant place to visit in the summer and it sounds like we will be as my mum was already plotting our return. 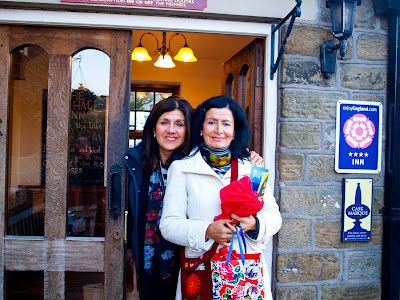 Thanks again to Mr Bacon for the recommendation, to my family for the fun afternoon and of course to those at The Old Hall Inn for our dinner! 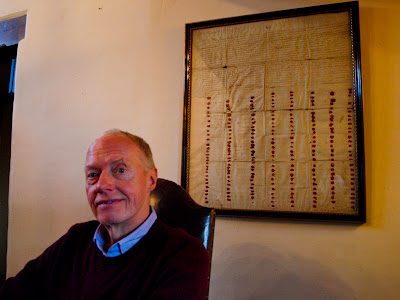 Posted by Jules at 9:56 AM
Email ThisBlogThis!Share to TwitterShare to FacebookShare to Pinterest