Many people who read this blog or who have mentioned Indian food in our presence will know that our favourite Indian restaurant is Mughli. It serves fantastic food and drinks. It has excellent staff. It's funky and modern. It's a breath of fresh air on the Curry Mile. We only discovered this restaurant less than a year ago and have been die-hard fans ever since. We've now been back a few times, be it for a consistently fantastic dining in experience or, when we were lucky enough to live in walking distance, to pick up a lovely Friday night tiffin box. 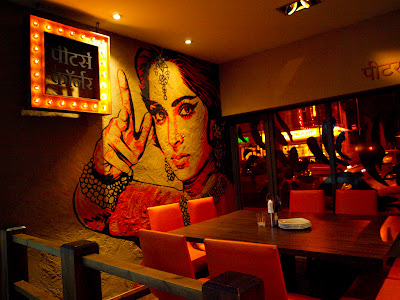 Since moving to Levy and settling in to the new house we hadn't been in to our old favourite in a while but continued to sing its praises to anyone who would listen. It was safe to say we loved it and we loved it just the way it was. So imagine our intrigue to receive an email from the boss Haz inviting us and a selection of other lucky Mughli fans in for a sampling of their new menu.

"New menu?!" You could hear us cry. "How could Mughli possibly get any better?" We couldn't wait to find out. On our arrival we were greeted at the door by the usually friendly staff and were pleased to see that as expected, even though it was an ordinary Wednesday night, Mughli was packed with people and there was an excited buzz in the air. We were soon joined by Haz himself who took us all to our table and explained that he was going to be giving us a slap up sample selection of food and cocktails from the new menu and all he wanted in return was our feedback and a donation to WaterAid. Stuffing my face AND helping charity. Brilliant stuff. 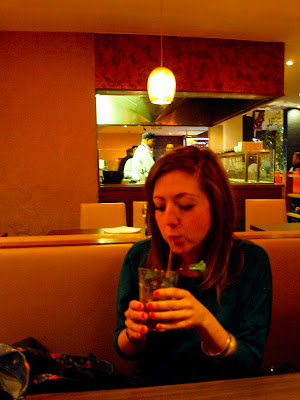 First of all I really must say a quick word about Haz. I really think he must be one of the best restauranteurs in the North West. Our first burning question for him was why the need for a new menu, when Mughli was already clearly by far one of the most outstanding Indian/Pakistani restaurants in Manchester? He told us that his priority when taking over the restaurant a few years back was to take the same old favourites people know and love that his competitors were making, and surpass them... Well, check, he succeeded in that without a shadow of a doubt. Now to stage two of Haz's plan. With his huge following of faithful customers and a great reputation under his belt, Haz can now continue to cook the best Indian food in Manchester but introduce a whole host of exciting new dishes, elevating his restaurant from staple favourite to culinary destination. Certainly a man who won't be resting on his laurels, I for one will be keeping a close eye on what he is up to. 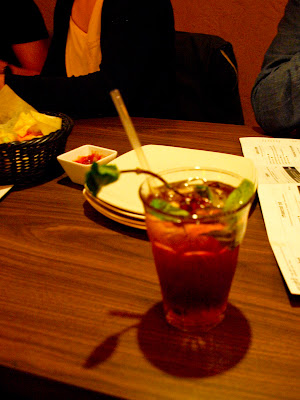 I believe one thing we may see from Haz in the future is a restaurant with an even bigger focus on the drinks. This would be awesome as Mughli's cocktails are fantastic. Throughout the night Bailey was treated to an array of original fruity cocktails featuring all the sunshine of India and Pakistan you could humanly bring to Manchester using liquids alone. Having decided to bring the car, I was a bit gutted about missing out, until I was brought a lovely selection of non-alcoholic beauties. 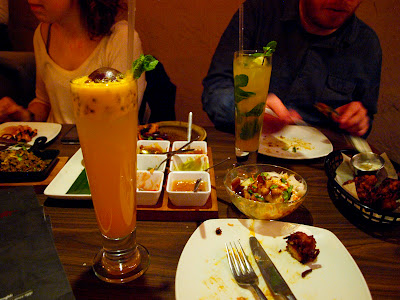 Onto the food. In case any fellow die-hard Mughli fans are reading this and panicking, although the menu has changed a fair old bit, it still has all the little touches that made Mughli so ace before. If you fancy a change from their (still brilliant I assure you) papadums, they are now offering baskets of beautifully light multicoloured Far Far - kind of like an Indian prawn cracker to be dipped in a sweet, spicy red pepper dip. We all agreed these were a much more sociable alternative to the traditional papadum as they could be popped into the mouth while keeping up a good conversation or slurping on a cocktail. 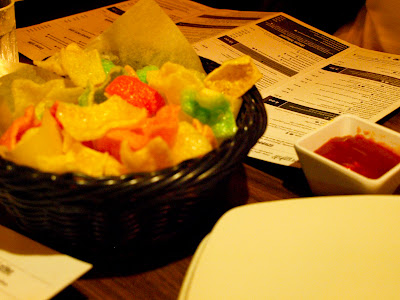 For papadum purists, do not fret, they are still as good as ever and are now accompanied by no less than six amazing chutnies. We loved them all but if we had to choose favourites they'd probably be the Chilli Tamarind Sauce and Garlic Pickle. 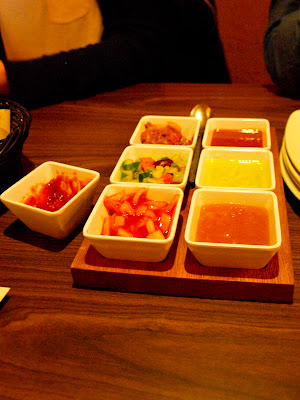 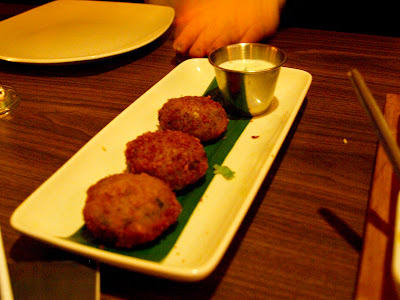 My personal favourite street food was the Samosa Chaat. Having only recently discovered the wonders of Panipuri, I was very excited to see that what was on top of my "deconstructed vegetable samosa" was very similar to the toppings I'd had on my first Panipuri - that lovely mix of the yoghurt and tamarind sauce with soft chickpeas and crunchy aloo bhujia was incredible. This was almost certainly the best samosa I have ever had. 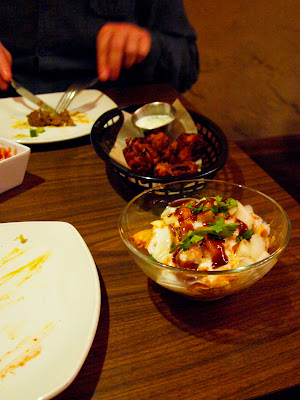 Onto the curries and before we tucked in Haz unapologetically stated that everything on the new menu is 100% authentic right down to the very non-British Khada Masala sauce served with the Chicken Tikka Masala (absolutely delicious, I know because Haz very kindly got me a little bowl to try without any chicken in). I absolutely love this attitude - Haz has confidence in his menu but also has confidence in his punters that they will want to try something new. 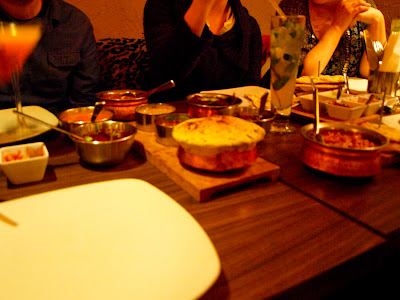 One dish Haz was really keen for us to try was the Chukkandar Gosht - a brightly coloured lamb curry with a vibrant beetroot sauce. This has to be the most interesting dish I've ever eaten in an Indian restaurant (again I got a nice pot of sauce to try!) and both Bailey and I absolutely loved it. I think this will be a bit of a love it or hate it dish as a few people on our table weren't sure about it but again, I admire Haz's confidence to put something like this on the menu.

Now onto my hands-down favourite dish of the night. I know Haz wants people to come to his restaurant and try a load of new stuff every time but I can't see how I will ever be able to set foot in Mughli and not order one of these bad boys - the Mushroom and Mixed Vegetable Dhum Biryani. Now I know what you're thinking. You can get a biryani anywhere. I always used to order biryanis as a teenager because I didn't know what anything else was but even I got over them and haven't ordered one in years. Well, let me tell you this is no ordinary biryani. First of all there's the wow factor as soon as it arrives at the table thanks to its creative presentation in one of Mughli's signature metal pots with a naan bread baked right on top like a pie crust. Amazing. Cut open the magic naan pie crust and you discover perfectly cooked rice with a delicious sauce layered through, getting hotter and thicker as you reach the bottom of the pot. On the side is a beautiful biryani sauce and a beetroot raita, all cooked to Haz's mum's family recipe. Frankly, this was amazing and I couldn't stop eating it which meant I nearly had to be rolled home like a greedy biryani-filled ball. 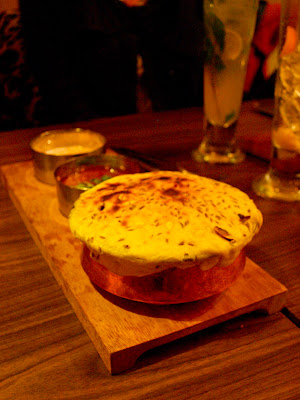 You've gathered I was feeling uncomfortably full so you'll have to forgive me for only trying a spoonful of the beautifully presented cardamom infused 'Tootia' Mango Firni. I never normally order desserts in an Indian restaurant, usually because all that's on offer is ice cream served in a Punky so all the times I've been to Mughli I've never thought to look at the dessert menus. I will be doing so in future, in fact I don't know how long I can resist going in for a portion of the amazing sounding Apple Samosas. 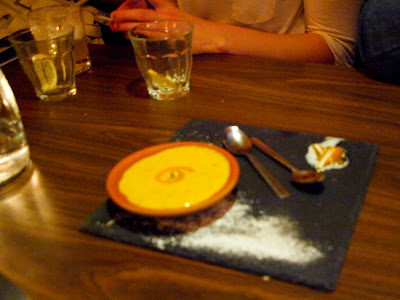 So, a fine introduction to the new menu at Mughli and we're so pleased that Haz invited us to try the new food. We had an awesome time, met some absolutely lovely people (it seems people who like Mughli are ace unsurprisingly) and apparently a decent amount was raised for WaterAid. We think there are some very exciting things going on at Mughli at the moment so if you haven't been since the menu change we urge you to go and try the new stuff. If you've never been before, what are you still doing here? Get yourself down there this instant! 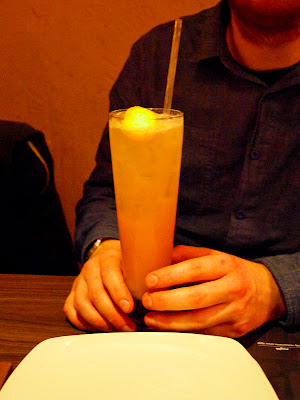 Posted by Jules at 4:44 PM
Email ThisBlogThis!Share to TwitterShare to FacebookShare to Pinterest