I like rum and rum likes me.  It's as simple as that.  For the last decade there have been no other contenders for my favourite booze.  I will happily imbibe good beers, ales, ciders and every now and then a quality bourbon but rum is where it is at for me.  Wherever I go it is my drink of choice unless the only rum on offer is Bacardi and then I'd rather have a half of liquid nitrogen.  I also like rum in all of its various forms (golden, dark, spiced) or delivery methods (cocktails, with a mixer or neat).  I think you get the picture, me encanta el ron! 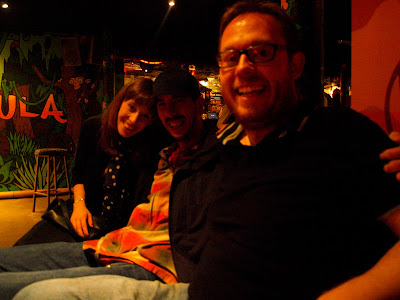 Now you know all about my continuous desire to drink rum you will be non too suprised that I, along with Jules and our two other rum loving companions Craig and Francesca, decided to attend The Liquorists Rum Trail.  The concept is simple and hard to argue with.  You meet a man who knows about rum in a bar, he tells you about rum, you drink some rum, you drink a rum cocktail, you have a bite to eat and then you repeat at a bar just round the corner.  Are you still with me? 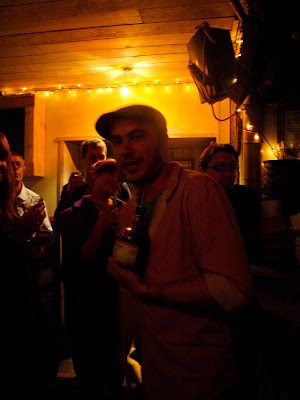 We arrived at the meeting point Bar Hula around 2 minutes late thinking that this would make us fashionable, instead we just awkwardly busted in on Barry (our genial rum guide) as he was about 2 minutes in to his introduction speech for the night.  He then had to repeat the first 2 minutes of his introduction speech just for us.  Before we start with the liquor lets talk about Barry.  As far as rum guides go I don't think it gets much better than Barry, he really did manage the impossible act of giving rum novices the basics while really flexing that liquorist brain of his answering some pretty tough rum based information requests.  He couldn't have been more friendly, enthusiastic or knowledgeable and it's safe to say we could have been served lukewarm pints of Fosters accompanied by rancid pork pies in the worst pubs of Slough and we still would have had an alright night out. 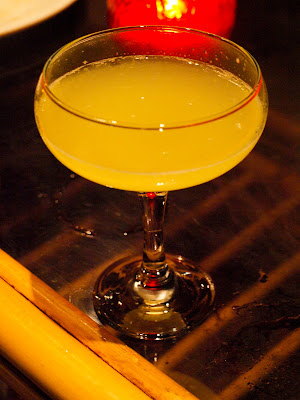 Drink one was Plantation Rum by Bibendum Spirits, a real nice sweet rum to get things going. It went down easy, far too easy.  The daiquiri that followed was also not a challenge to consume.  There was a quick plate of cinnamon pineapple slices passed round which was a really nice accompaniment to the sweetness of the rum.  Hula Bar it self is also a really good bar, having been a few times previously the drinks are always good even if the wait times at the bar aren't (not the bartenders fault!  It's just always rammed). 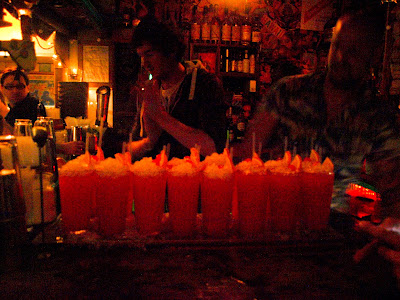 Drink two was a demerara based Eldorado Rum that had been waiting around for 12 years before we got to it.  I don't think I'm overstating the importance of this drink when I say it was an absolute revelation.  I had never tasted a demerara rum before and when I did taste it I didn't want to stop tasting it.  It is quite hard to explain the very different flavour it had (especially as I come to write this 3 months later) but I would say that if you are a fan of bourbons (my other vice) then give this a go and I don't think you will be disappointed by its sweet warmth.  Once the Swizzle cocktail which followed was swigged a pact was made that we would source a bottle of Eldorado for our New Years Eve celebrations.  Oh the bar was Keko Moku, another good bar that is far too popular, a drunk obnoxious woman stood on Jules' foot then we left. 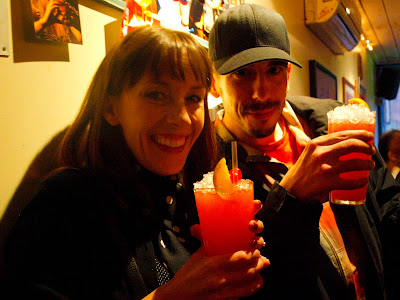 Drink three, finally a rum which I had drank and enjoyed previously, Matusalem Rum all the way from the Dominican Republic.  Great flavour, very smooth and probably a really good rum to sip if you've never drunk spirits straight before.  On the night though this great rum sort of paled in comparison to the other offerings.  The rum here though was not added to a variety of exotic elements to create an opulent cocktail, instead it was paired with a locally produced pale ale.  I think some people were a little disappointed by this but this is normally how I would drink rum at home anyway and it was really refreshing, a good choice to put in the middle of the trail I reckon. The venue for this refreshment was The Odd Bar which I've never really spent much time in but it was pretty good and we got a decent reserved space so we managed to have a relaxing sit down for a minute or two before being whisked on to the next location. 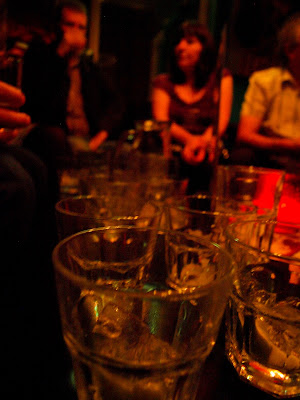 Drink four, we were still feeling surprisingly chipper at this point, and we were off to Tusk.  A new addition to the Northern Quarter and a worthy one I would say, will definitely be going back.  This drink was the scary one for me, as a rum drinker I'd tended to stay away from the over proofed rums and Wray & Nephews was the most notorious of all those danger liquids.  In my head I had assumed that drinking it straight would both knock you on your arse in the gutter and that the only terms to describe the taste would be along the lines of 'corrosive' or 'battery acid' or 'weapons grade'.  I was wrong on both counts.  It did not significantly increase my inebriation level and flavour wise, although it did have a mighty kick, was an intense treat delivering all of the flavour and punch of a margarita in an intense blast.  I don't think I could sip it all night but if delivered at the right time would definitely give any drab night out a boost.  The cocktail which followed was also brilliant, a twist on a margarita featuring the heavy duty Wray & Nephews which didn't dissapoint but did temper the rum a little. 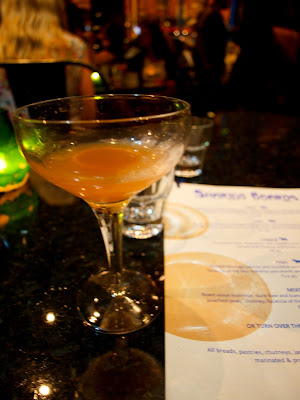 Drink five, we were on the home straight now and we arrived at fancy new bar/deli thing The Blue Pig.  We loved this place from the off, the atmosphere, the food and the decor were all right up our street.  It was added to 'the list' immediately so that we could return at a later date.  The rum on offer here was Brugal rum, a Caribbean effort which I'd not tasted or seen before.  Much like the Matusalem this was a great rum which was smooth and easy to drink but not as 'radical' as the others on offer, it did lend itself to a great cocktail though. 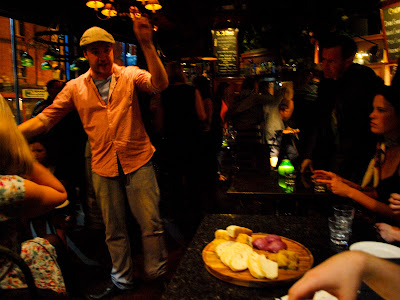 Drink six, for this drink we were whisked in to taxis and driven out of the city centre.  With thoughts that this had been an elaborate ruse to get us back to a dark secluded location to harvest our (recently pickled) organs we were happy when we arrived at The Liquorists HQ, a converted industrial unit on the outskirts of the city.  That doesn't really make it sound as good as it was, it felt like the most well stocked aircraft hangar on the face of the planet, the bar was a treasure trove of glistening fancy pants booze bottles of a hundred exotic varieties. 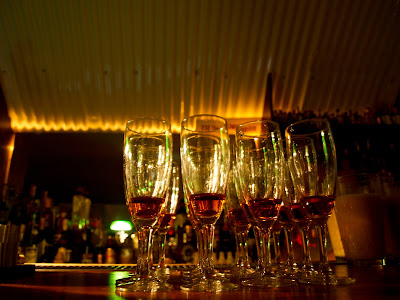 The best part of this was the additional boozeologists who were present were more than happy to share exciting information about the Willy Wonka esque selection of spirits on display.  The final rum we tasted was Pussers Navy Rum.  Again the phrase 'navy rum' has always been an alarm bell for me indicating cheap strong brain cell killing fluids.  It was a beast of a rum that flayed the inside of your mouth but at this point in the evening that was exactly what was required.  The Painkiller cocktail that followed was simple but turned the Pussers on its head flavour wise delivering quite a mellow taste. 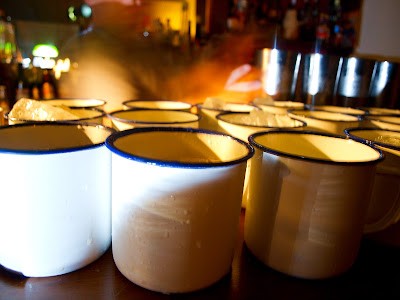 Throughout the night there had been nibbles here and there but at the last stop we were presented with a Thai curry.  The Liquourists are obviously alcohol genii (I looked that spelling up) but they also know about food because this was one of the best thai curries I have ever had and the perfect partner to the Pussers rum.  Also good to have a bit of stodge so you can pull yourself together before tottering off in to the dark streets of Manchester. 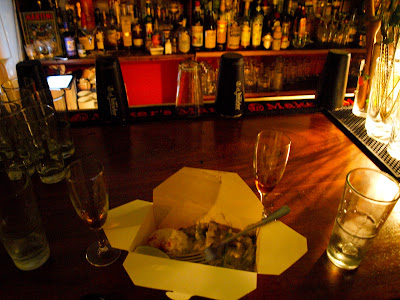 This really was one of my favourite experiences since starting to write this blog two years ago.  Was it perfect?  Nope, some of the bars couldn't quite accomodate our group, the food was a little inconsistent and sometimes it was impossible to hear Barry's rum education over the noise of the bars.  Did those niggles matter?  Nope, honestly it didn't put a scratch on the absolutely brilliant night we had.  All of the rums and cocktails were brilliant and more than that I think there was a lot of thought that had gone in to the selections we received, they really covered all the bases. 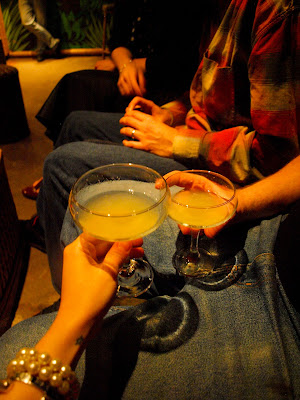 Value wise I don't think it can be beaten, the mid week price is simply unbelievable for the raw materials that make up the night out.  I don't think I could recommend this event to anybody more and it doesn't matter who you are, like I said its pitched both for beginners and seasoned rum drinkers.  I made the decision that although I am not tequila's biggest fan I would go on the Liquorists Tequila Trail because I trust that they will convert me and wipe away any of my previous poor experiences with the lower quality end of that paticular fire water.  The Liquorists have a catchy slogan and that is "NO HANGOVER GUARANTEED" its difficult for me to endorse this guarantee as I did wake up with a bit of a hangover the next day but this might have been the one or two additional drinks that followed the trail.  One thing I can guarantee though is "YOU WILL HAVE A GREAT TIME". 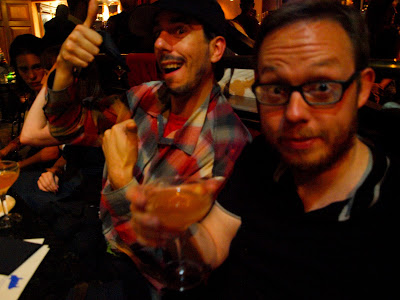 Posted by Bailey at 10:25 PM
Email ThisBlogThis!Share to TwitterShare to FacebookShare to Pinterest