Bailey and I absolutely love old school restaurants. We particularly love a good old school trattoria, the cheesier the better, in-house accordionist if possible, but obviously only if they are serving up good old fashioned fuss-free Italian food. However it is quite random that our favourite old school Italian restaurant is actually in Watford of all places, and that restaurant is L'Artista. 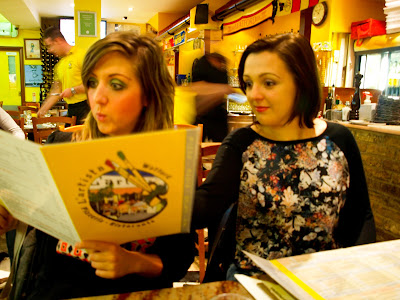 In case you're wondering why we've been eating out in Watford in the first place, allow me to explain. Last year Bailey and I devised a plan for his birthday weekend to London. Having left the planning of said trip to the last minute, the coach and train prices were extortionate so we decided to drive into somewhere close enough to the Big Smoke that we could tube it in but far enough away that we wouldn't get stuck in Friday evening London traffic. Watford it was. 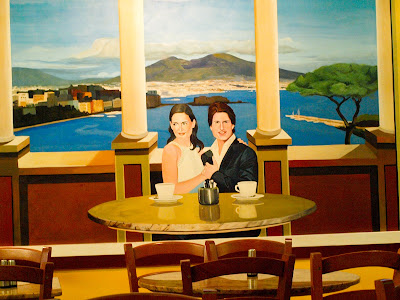 On arrival we wandered into Watford to look for somewhere to eat but found limited options. But suddenly we walked past L'Artista. This place looked amazing. Not only was it definitely a cheesy Italian like the ones we love, it was absolutely packed full of people and the atmosphere looked incredible - the perfect place to spend Bailey's birthday night. We had a brilliant time - delicious (albeit rich) food, mammoth portions, all Italian staff and a raucous party atmosphere. We vowed to return. 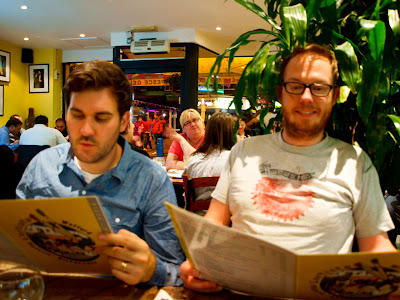 The perfect opportunity to return to L'Artista arose when we organised a trip to London with our friends the Doyles. We were staying in Watford again and were very much looking forward to revisiting the "mental Italian restaurant" as we were describing it. 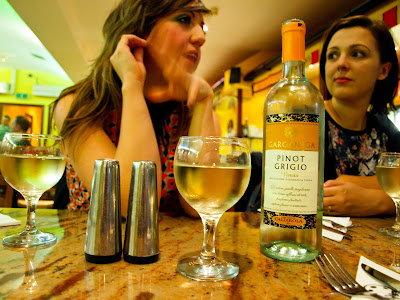 We started with some Vino della Casa and the waiter suggesting that we get two bottles instead of one seeing as we were clearly going to drink it. Actual lol. He wasn't wrong anyway. I can't say this wine was much to shout about but can't have been undrinkable as well, we did drink it. 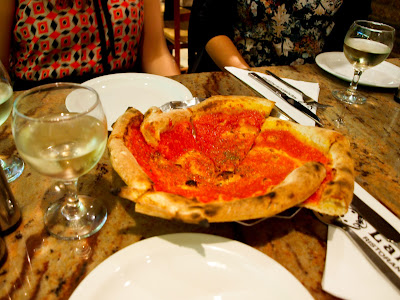 For our starter, Bailey and I were keen to get ourselves another portion of the delicious Garlic Pizza Bread with Tomato we'd had on our previous visit. Fresh out of L'Artista's pizza oven, this was just as good as we remembered it. Excellent chewy base that was crisp on the outside and topped with a rich tomato sauce and loads of garlic plus a good drizzle of oil. Lovely stuff. 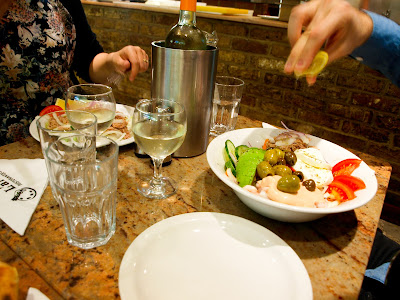 The Doyles both chose items from the Antipasti Freddi section of the menu - Jeni had the Tonno e Fagioli while Doyle had the Insalata dell'Artista. Both said their salads were pretty decent and fresh and Doyle really couldn't believe the size of his huge bucket-sized bowlful of goodies. 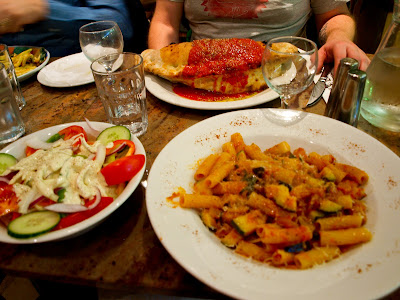 Last time I visited L'Artista I ordered a nice Penne all'Arrabbiata which, although absolutely covered by the waiter in parmesan, was a simple dish compared to Bailey's mega-rich Pappardone all Zozzona which had left him in a real indigestion pickle. Having learned from Bailey's mistake I got myself a Rigatoni all'Ortolana with a Mixed Salad and asked the waiter to go easy on the cheese. This was fantastic. The pasta was al dente, as were the veggies in the sauce which was tomatoey and delicious. My salad was great too and I loved the dressing. 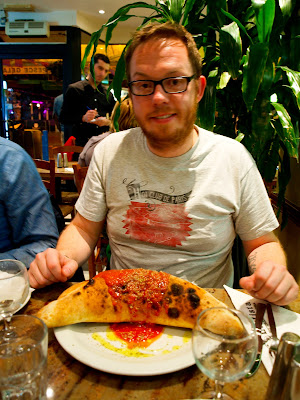 Unfortunately for Bailey, he had not learned from his own mistake and ordered a Calzone. 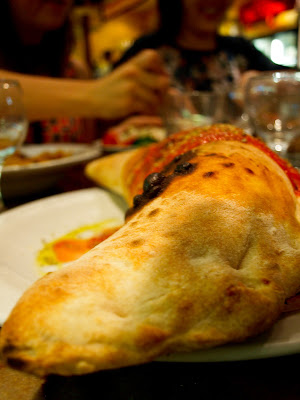 This was an absolute beast of a pizza, jam-packed with ham and pepperoni. Bailey loved this, later describing it as "amazing". He thoroughly enjoyed it at the time but I believe he was in a spot of bother digestion-wise in the middle of the night! Worth it though. Plus it can't have been that bad as he ate a burger for breakfast the next day. 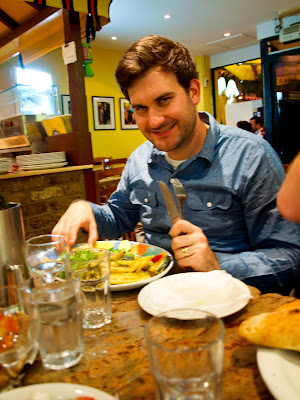 After having banged on about the food at L'Artista, we were really pleased that the Doyles also enjoyed their mains. Doyle's main was the Spigola alla Griglia while Jeni plumped for a slightly less indigestion-inducing pizza than Bailey - the Fantasia which was topped with olives, pepperoni, mushroom, artichokes and mozzarella. Jeni is a big pizza lover and thought this one was great. 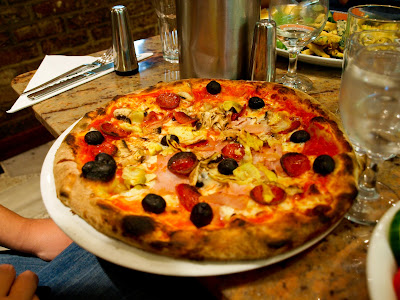 Even though we had already had quite a lot to eat and drink at this point, we were totally up for rounding the evening off with another little tipple and perhaps a dessert... but this is where I feel L'Artista fell short. I was really in the mood for some kind of cocktail or beverage - an Espresso Martini, a liqueur coffee maybe or even a cheeky little Affogato? Apparently they didn't do anything like this, what a pity. Not to be deterred we asked what the "Daily selection" of desserts mentioned on the menu were - I was thinking if I couldn't have a cocktail a nice slab of someone's family recipe Tiramisu could cheer me up. So imagine our surprise to be presented with one of those generic dessert cards featuring options such as ice cream served in a "Punky" plastic penguin. The same dessert card I have seen up and down the country in eateries such as The Balti King in Sheffield (no comment). Disappointing.

Anyway this didn't spoil our evening in the slightest as we had had such a lovely time and had been very well looked after by the excellent staff at L'Artista. One thing we noticed both times we visited was that the restaurant was full of Italian folk which was definitely a good sign to us. This time we spied on two Italian sons taking their mum out for a spot of Friday night grub, great stuff. I'm so glad we went back there and it did spark a conversation in which the four of us agreed that there needs to be a place like this in Manchester where you can go and have a rip-roaring good time - I am hoping the newly opened Italia could be the answer to our prayers. If for some reason you ever find yourself in Watford I would definitely recommend getting yourself to L'Artista and not just because it's pretty much the only option! 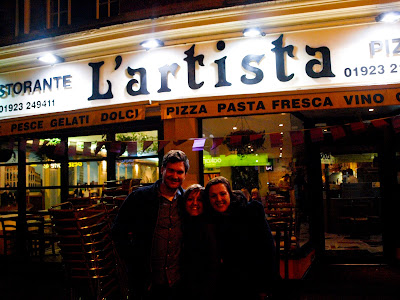 Posted by Jules at 12:27 PM
Email ThisBlogThis!Share to TwitterShare to FacebookShare to Pinterest