Just last week we had a special visitor, a lady of fine tastes who lives in Barcelona and is originally from the Alsace region of France, and so we really wanted to show off the best that Manchester had to offer. Based on both Twitter based and personal recommendations we decided to go to double AA Rosette owning, multi award winning Room Bar & Restaurant. Expectations probably couldn't have been much higher after all the praise that had been heaped on this eating house. 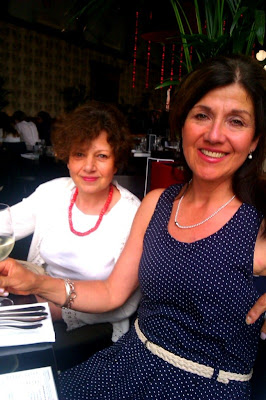 On arrival the expectations took their first dip. Walking up the grand stairs of the grand building we were treated to the grand sight of a heaving bar area (and the grand sound of pumping dance music). My first thoughts really were that we had come in to the wrong Room and that a couple of doors down there was a pleasant restaurant atmosphere to be found. Unfortunately we were in the right place but after pushing through the crowd we were spotted by the waiting staff straight away and led through the gigantic dining room and to our table in the furthest corner of the restaurant at the maximum distance from the rowdy Friday night drinkers. Now I haven't got anything against a lively atmosphere (or people enjoying a spot of booze on a Friday evening!) but the hububb coming from the bar, even at our distance, was still at odds with the beautiful decor and the expected fine dining experience. 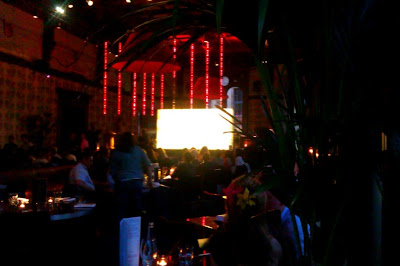 What wasn't at odds with the expectations of the restaurant was the level of service from the front of house staff which was faultless. Everybody who came to our table for whatever reason was pleasant and approachable but absolutely 100% professional. 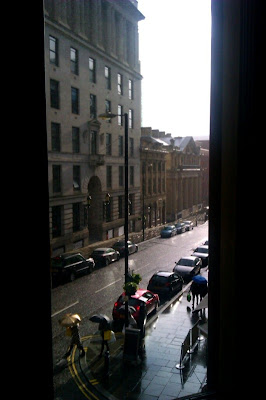 Food-wise everybody on our table went for the All Inclusive Menu which without a doubt is great value. The menu itself changes day to day but there was a really good range of fish, vegetarian and extra meaty options and every item sounded interesting and fresh.

I've decided recently to put to one side any squeamishness I have towards odd cuts of meat or unfamiliair seafoods and so for my starter I went for 'Pork & Apple' which was comprised of apple sauce, fried squid, pig head, pig ear and finsihed off with a brush stroke of black squid ink. It wasn't very nice. For starters it was only just warm, it can't have been warm when it came out of the kitchen but then it didn't help that there was quite a long delay between my dish being served and the two final soups being delivered. Even if it had arrived magma hot I don't think I would have enjoyed it. The two different cuts of the pig head were indistinguishable from each other, it just seemed to be two indescript piles of pig mush that contained some unchewable lumps. The apple sauce was tasty and the calamari crunchy but generally it was pretty rank. 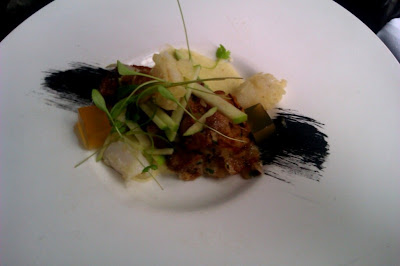 Other people had more luck with their starters. The Onion Veloutés went down well. 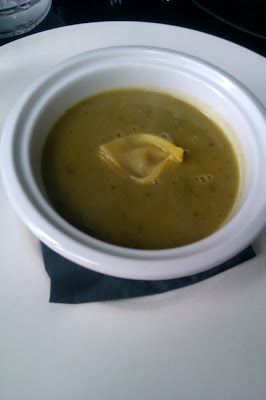 Jules quite liked her interesting starter of Mackerel Rollmop, consisting of pickled fish served with candied walnuts and cubes of beetroot which looked really impressive but somehow felt that a certain something was missing which she couldn't quite put her finger on. 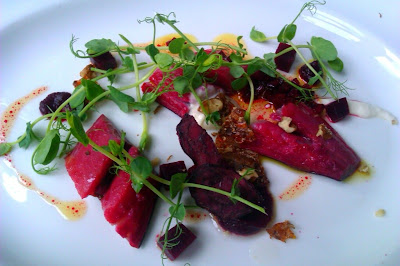 Then there was a long wait for the main course to arrive. In fact we spent quite a long time throughout the meal looking at empty dishes or an empty table. After the starters were slow, the main was late then the desserts were really really late. Considering we are not slow eaters you can understand our unhappiness with the speed of the food delivery when I tell you that we were in the restaurant for over three hours. For me, even in a fine dining restaurant, that is way too long and affected the enjoyment of our meal and also ate in to the rest of our evening. There was a quick half hearted apology from one of the managers at the end but it didn't make up for what was pretty farcical wait times.

When the main course did arrive, again every single dish looked amazing, the presentation was faultless throughout. 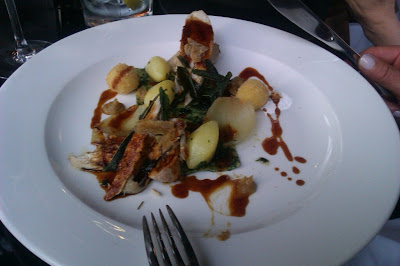 I went for the roast beef served medium rare with a portion of roast skirt beef, mushroom, asparagus and creamed potatoes, I had really really enjoyed my roast beef during my visit to The Wig And Pen and was expecting something along the same lines. SPOIILER It wasn't as good END SPOILER. It was okay but it was a real mixed bag. The four slices of obviously prime beef were beautifully stacked on the plate but as I disassembled the stack it was pretty clear that it had been cooked really inconsistently some slices were rare, some were medium and one slice was medium at one end and rare at the other end. I'm not too fussy about how my beef is cooked so it didn't really affect my enjoyment of it but the skirt beef was worse, it was completely overcooked and was absolutely charcoal on the bottom. Everything else on the plate was brilliant though including the creamed potatoes which I have to say were some of the richest and tastiest potatoes I have ever tasted. 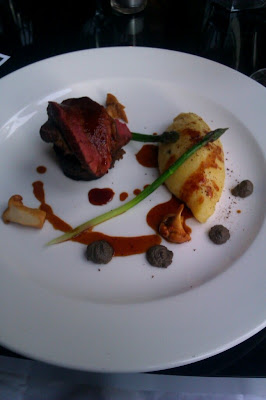 Again I think I got the raw deal as everybody else had mostly positive things to say about their main courses, Jules' Cullen Skink smelt good from where I was sitting but she did say that although everything was cooked well she didn't really 'get' the dish and felt that it had been deconstructed for being deconstructed's sake rather than for it being a good idea for a plate of food. 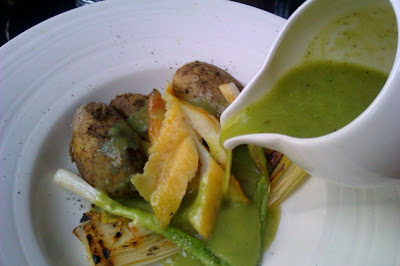 Both the Roast Chicken and the Nut Roast were firmly put in the 'delicious' category. 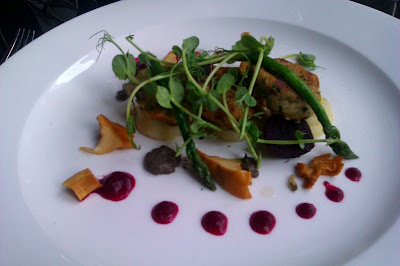 Cue the longest wait of the meal for the dessert. Luckily this was the course that was worth waiting for from beginning to end. Across the board the desserts looked and tasted amazing. I went for Milk & Chocolate which was comprised of a slice of a multi layered chocolate slab, a vanilla milk and a dollop of creamy ice cream sat on a bed of sweet caremelised nuts (I think they were nuts, I can't remember! They were brilliant either way). I'm not really a dessert person but this dish was absolutely fantastic. 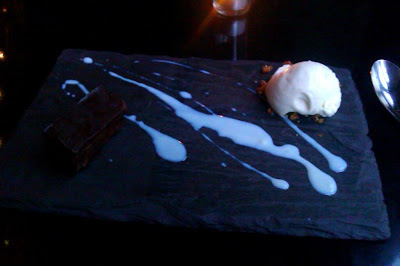 The only problem was that the I tried Jules' dessert and it was even better. Jules had gone for the 'Peanut Butter and Jelly Sandwich' which was comprised of a banana panna cotta, a peanut butter icing with a crumb and a toasted brioche stuffed with jam. I had a good spoonful of this bad boy with one little bit of each element and it absolutely blew my socks off. 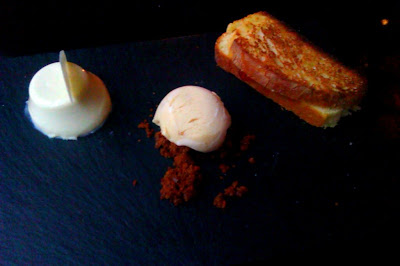 The other desserts received similar praise and looked great. Roy had gone for the Baked Alaska and Aida went for the Arctic Roll. Lovely stuff. 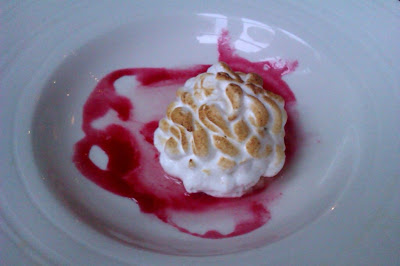 So in summary it really seemed like the kitchen had a bit of a nightmare with inconsistent food being served late which is really disappointing for such a highly regarded restaurant, I'm not sure why they would let that food leave the kitchen and why the management wouldn't make more of an effort to keep guests happy while sat waiting. Stick on top of that the disconcerting din that comes from the bar area and I really don't think I will be venturing back any time soon despite the rip roaring success of the desserts and the mostly excellent service. Shame. 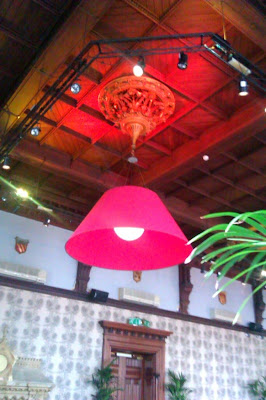 Posted by Bailey at 6:42 AM
Email ThisBlogThis!Share to TwitterShare to FacebookShare to Pinterest