Last stop on Bailey's Birthday London Eating Adventure: dinner at Koya Noodle Bar in Soho. Expectations were high as Koya had come highly recommended by The Observer who awarded it Best Cheap Eats. And despite it being only 6:30pm when we arrived, the small restaurant was totally packed out and there was quite a large queue of people waiting patiently outside for a table. This to me spoke volumes in a city where people have so much choice. 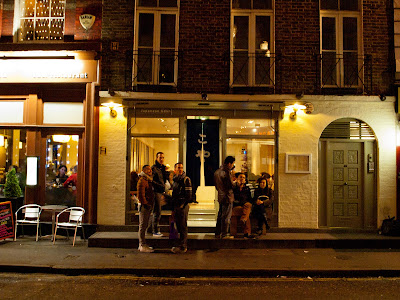 Despite the queue the staff at Koya obviously had a pretty good system down and it wasn't long before a waitress came outside to make a note the groups that were waiting so she could get tables ready and we were soon shown inside. 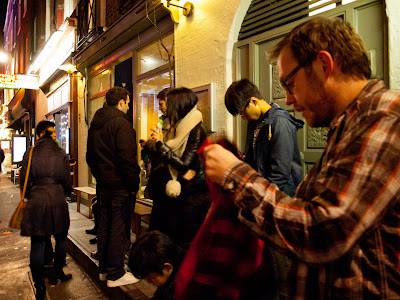 We found a super-clean and modern, simple interior that was made cosy and inviting on a cold winter's night by nice mood lighting and plenty of communal seating. 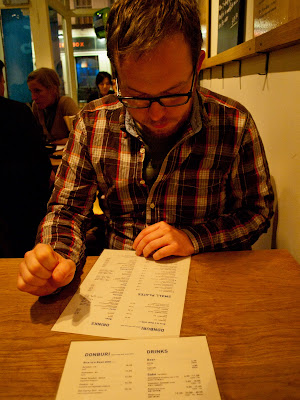 Koya's menu itself was very basic - offering a variety of noodle bowls with different broths and ingredients. For those people after something a bit more exciting, there was also a great selection of dishes available on the specials board. Bailey chose a Helles Beer from there which he loved and said it had a really Christmasy taste. I was feeling like a bit of a stodge monster after all the eating we'd done in the day so went for a nice calming pot of green tea. 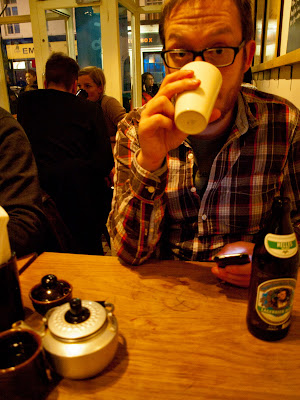 I guess given the amount we had both eaten earlier in the day we were both feeling in the mood for something simple and both picked a bowl of Atsu-Atsu - described on the menu as "Hot Udon in Hot Broth". Bailey ordered the Tori Atsu-Atsu and I plumped for the Kizami. 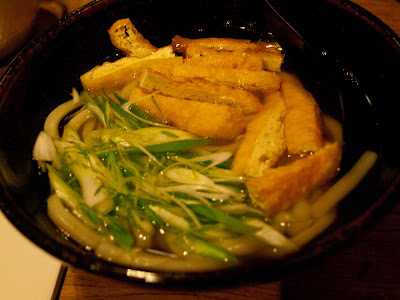 Mine arrived steaming hot - a simple bowl filled with broth, thick noodles, spring onions and crispy fried tofu. I would say this dish was very simple, but still full of fresh and well-prepared ingredients. The tofu was great, I loved the texture of the noodles and the spring onions went really nicely with the perfectly clear broth. 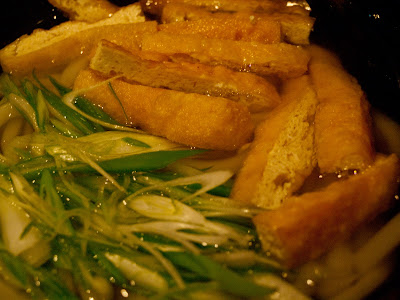 I was quite surprised that the actual broth itself wasn't mega tasty and flavoursome and although I did manage to pep it up a bit with some of the spices they had out on the table, I couldn't help feeling a bit disappointed.

Bailey's Atsu-Atsu was quite similar to mine except filled with chicken and some veg bits and bobs. 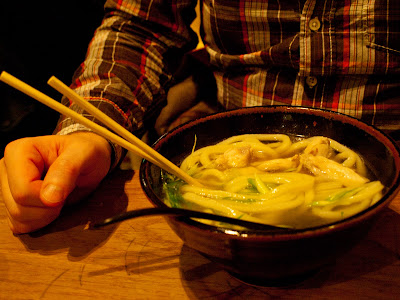 He loved the ingredients in his dish, particularly the chicken which he described as "high quality, soft and succulent". However Bails agreed with me about the broth lacking a little in flavour and body and also felt like it "wasn't a very hearty meal" and that it didn't satisfy his appetite. Perhaps we should have ordered a few starters or sides!

Overall I would say we were generally impressed with Koya Noodle Bar, even if it didn't blow our socks off as much as we thought it would. There's no denying that it lived up to its reputation as an excellent value (I think we only spent about 20 quid!) "budget" place to eat in London, and it was definitely a lovely place to hang out with friends on a Friday night. 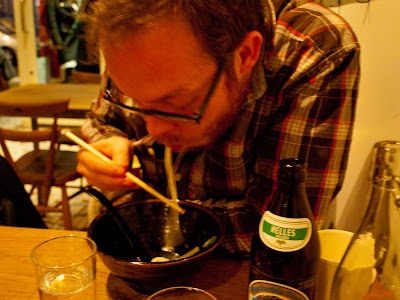 Posted by Jules at 9:00 AM
Email ThisBlogThis!Share to TwitterShare to FacebookShare to Pinterest