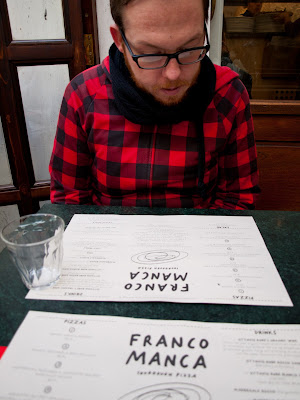 Bailey being the huge pizza fan that he is, is an avid reader of Slice on Serious Eats. As great a site as it is, it can be a frustrating read due to the fact that, seeing as it's written by Americans, all the places it recommends are, well, in America. So when Bailey came across this Slice article naming Franco Manca as "London's best pizza" last year, we knew we had to hunt this joint out. 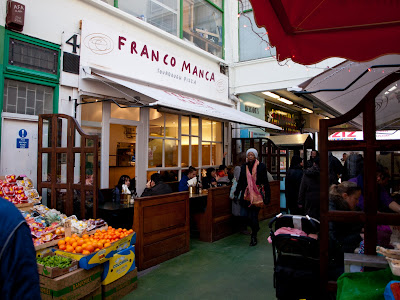 Tucked away in Brixton's Food Market, you would expect Franco Manca to be a bit of a no-frills budget eatery but actually it stood out as soon as we saw it as being a really lovely place. Tasteful yet simple contemporary décor, cosy tables and a beautiful pizza oven proudly placed in the window for all to see - we didn't mind at all that we ended up sitting next to a pile of fruit and veg boxes from the grocers next door! 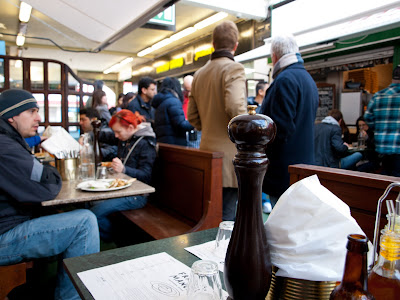 We had heard that it was a good idea to get to Franco Manca early as it apparently gets busy very quickly so like the keen beans that we are, we rocked up at 11:50am in time for its 12 noon opening and found it to be absolutely dead. We were told to come back in "5-10 minutes" and went off for a stroll round a vintage market, chuckling to ourselves about how we "didn't see what all the fuss was about" seeing as there had been no one there. We came back exactly 13 minutes later with egg on our faces when we saw that already most of the tables in the restaurant had been snapped up and that we were going to have to eat outside and just a few minutes after we were seated people started having to queue! Now that is popular for you!
Once seated we ordered a nice organic lager and glass of Ottavio Rube Organic Wine - both very reasonably priced, as well as our lovely pizzas and a salad. 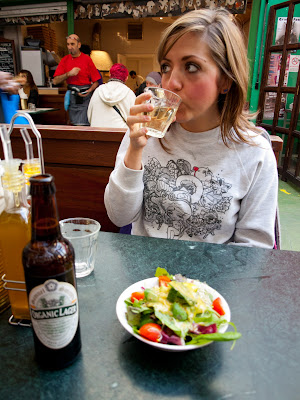 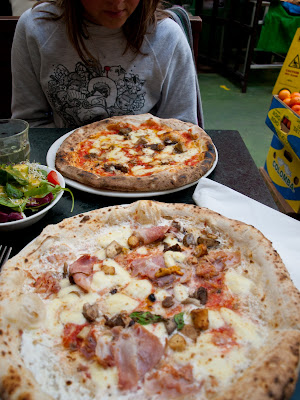 We were really pleased to see (as were I'm sure the hoards of people queuing behind us) that pizzas were literally flying out of that lovely brick oven and it can't have been more than a few minutes before our gorgeous pizzas were in front of us looking absolutely amazing. We couldn't wait to tuck in. 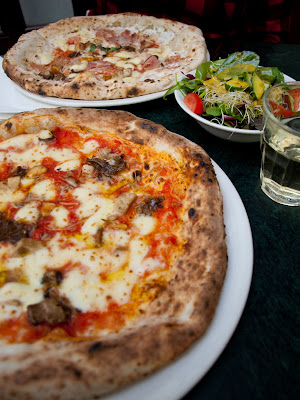 Bailey immediately fell into some kind of pizza coma, declaring his "hands down the best pizza" he had ever had. The toppings were liberally scattered around on the base but were the perfect amount and a great combination of flavours. What really impressed Bailey was the dough - he kept saying that he could have quite happily have sat and eaten the dough on its own drizzled with a little bit of the yummy garlic and chilli oils they had out on the tables. 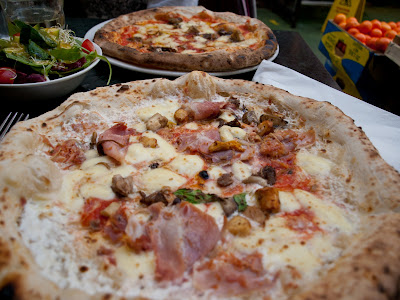 My pizza was also just as gorgeous. The base was indeed amazing - so light, chewy and doughy. I loved the truffle oil - don't think I'd ever had that before and Bailey was quite jealous that his didn't have any on. The wild mushrooms with organic mozzarella was lovely. I think I also found the odd bit of aubergine on there which was a nice little surprise. Awesome. It all went great with our little salad which was fresh and lovely with a great dressing. 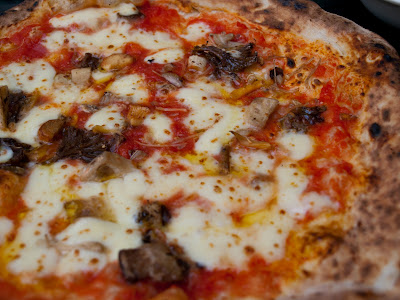 My only complaint which really is a small thing and it was partly our fault for having our 13 minute wander was that as it was soooo cold outside, despite being under a heater, our pizzas got a bit cold! This wasn't a much of a problem for Bailey who is a quick eater but mine did go a bit cold! Still tasted lovely anyway and it's not often it's MINUS TWO in London in the day!!! 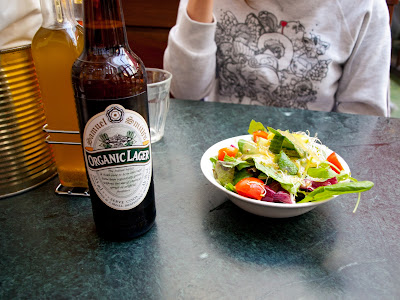 Anyway the long and short of it is, we totally fell in love with Franco Manca! It has made us sad writing about it as we know we can't go back there whenever we feel like it. We loved everything about the place - the ethos, the service, the price (amazing considering it was London), the booze and of course the pizza. I would recommend Franco Manca to anyone - pizza lover or otherwise, in fact I would recommend going to London just to go here, I definitely will be returning. Next time I go I think I will follow in the footsteps of the man who sat on the table next to us, known as "Pizza Hero" - who as soon as he had finished his pizza, immediately ordered another one and ate it all up. If that isn't a sign of a great pizza place, I don't know what is. 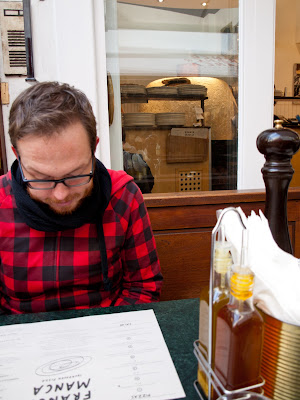 Posted by Jules at 6:00 PM
Email ThisBlogThis!Share to TwitterShare to FacebookShare to Pinterest