Due to other commitments and busy weekend, Bailey and I hadn't had Pizza Sunday for aaaages until last night. So we were very excited about our first Pizza Sunday in a long time and had decided on a Breakfast Pizza a la Dough Pizza Kitchen- a yummy pizza topped with tomatoes, veggie sausages, mushroom and egg. 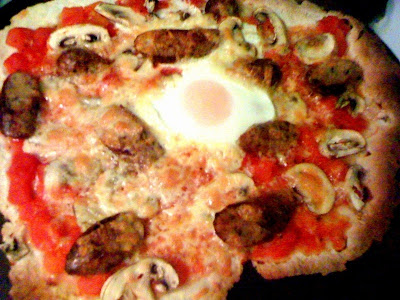 We used our usual pizza dough recipe but instead of using my usual spiced / herbed passata as a base, we tried to make it more breakfasty using tinned tomatoes with a bit of salt and pepper. 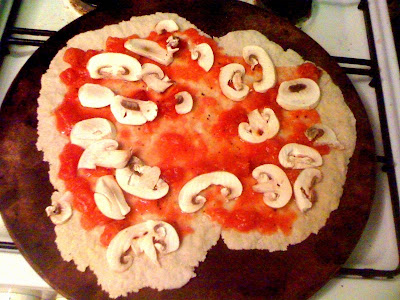 We also added some thinly sliced mushrooms, some veggie sausages that we'd cooked in the oven for about 10 minutes and some cheddar cheese. 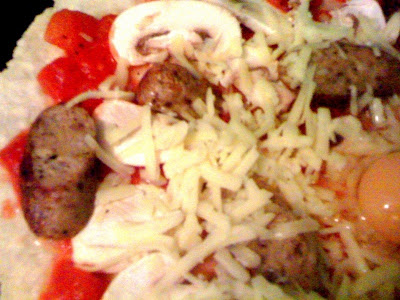 Finally we cracked an egg into the middle of the pizza and voila, it was ready to go into the oven on our trusty pizza stone. 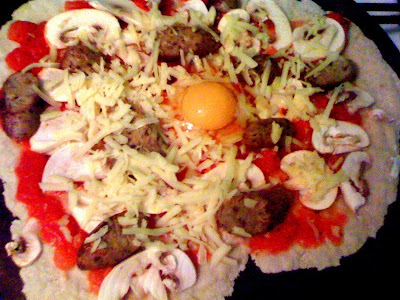 Particularly as Bailey is a little squeamish about eggs, we were worried that the egg wouldn't cook so we didn't pre-cook the pizza before putting the egg on - we just got it all in the oven. As it turns out, I pulled the pizza out of the oven after the usual five minutes and the egg looked a little wobbly so we gave it an extra minute which meant the crusts went a bit brown. 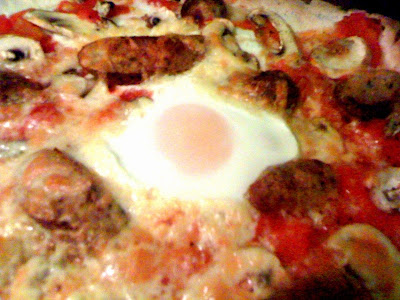 The egg wasn't a problem in the end and we thought it tasted absolutely lovely - very breakfasty with great flavour combinations. For some reason the egg, which was cooked just right, tasted just like a boiled egg which I liked. 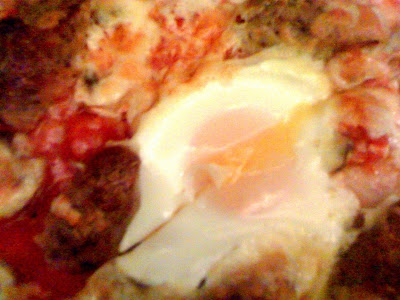 The only problem was the base turned out a little bit soggy - I'm not sure if this was due to the chopped tomatoes or the fact we put the egg straight on there. Anyway, it didn't really have the crispness of our usual bases under the toppings, even though the edges were a bit too crisp. I think next time we will pre-bake the base for a minute or so then pop the toppings on, ensuring they go all the way to the edge so the corners don't burn. I might also use passata and a few grilled or even griddled tomatoes for a really yummy breakfasty pizza with a nice crispy base. 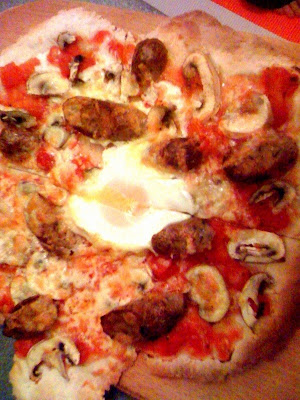 Posted by Jules at 5:21 PM
Email ThisBlogThis!Share to TwitterShare to FacebookShare to Pinterest