Having just arrived in Fes and having eaten just about our fill of traditional Moroccan food in Meknes the night before, we wanted somewhere tourist-friendly and a bit quirky to eat. Our guide book suggested Café Clock as an excellent option so we took our rumbling tums off to the medina for lunch.

Having heard that Fes medina is notoriously difficult to navigate, we set out with not one, but TWO maps and had planned a "foolproof" route to the café in advance. Of course, we still managed to get completely lost down a couple of the busy market alleyways. After several stops to look at the maps (stupid tourists or what?) we finally just happened to come across a dark little opening with a bright orange "Café Clock" sign leading us down an alleyway and into the café. 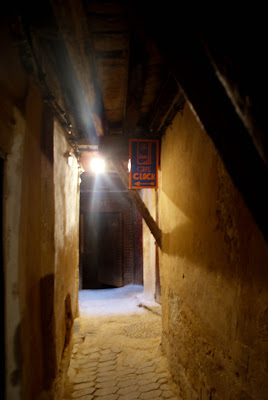 Once inside we could barely believe that such a huge place (three or four floors!) could be tucked away down such a tiny little alley. It had really funky décor and reminded me of some of the quirky little student pubs we go to back home. 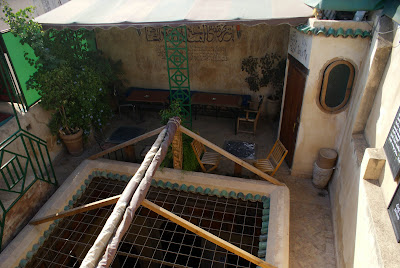 We made our way up several flights of stairs to a lovely roof terrace which is set out on several different levels which makes it feel even quirkier. 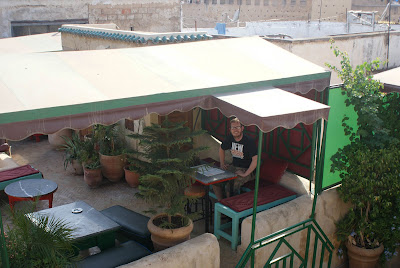 We settled down in the sun and looked out over the excellent view of Fes. The terrace offers a prime spot for nosying out over the city, including a great view of the minaret of a nearby mosque which allowed us our most close-up look of the holiday at how detailed their decoration is. 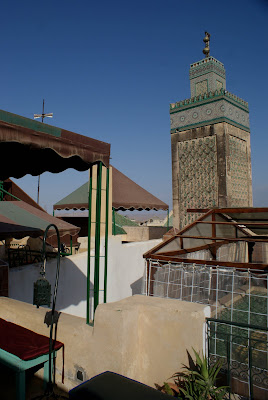 Looking at the menu it was almost like those in one of the aforementioned student pubs from back home, except with a really exciting Moroccan twist. 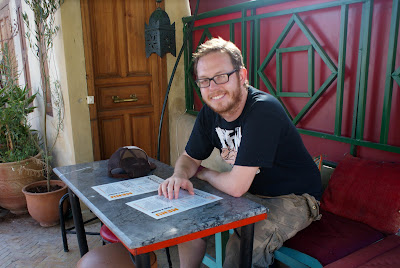 Bailey ordered Café Clock's Camel Burger with Taza ketchup, Salad and Fries. When it arrived it was absolutely massive - as Bailey said "far too big to eat on a hot day", although he somehow managed it! He loved his camel burger (apparently made from camel mince and hump but he said it just tasted like beef) with a perfect bread cake, proper tasty burger cheese and whole thick ring of red onion. He thought the meat was in danger of being a little too pink but it was OK for him. The chips were perfect and the ketchup and mustard they brought out with it were ace. 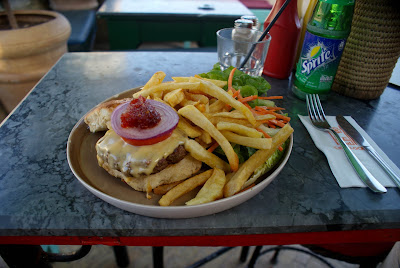 I went for the Fes platter of Moroccan Tapas and didn't really know what to expect as the menu didn't go into much detail. As it turned out it was a delicious selection of all the mezze bits and bobs you get given to go with your food in restaurants - which are often the best part of the meal I think. It was a beautifully presented plate of olives, dates, Maakouda potato fritters, Moroccan carrot salad flavoured with cumin, Moroccan tomato salad, beetroot salad, Moroccan cheese and my favourite Zaalouk aubergine dipping accompanied by a big pile of ace Moroccan bread and msemen buttery bread. 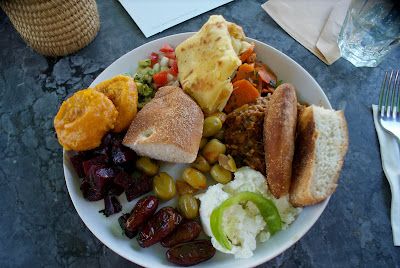 Although I felt like a bit of a seasoned pro with regards to all of these dishes by now as I'd eaten and read about most of these dishes so far on the holiday, it was really nice to have them all on one plate presented in such a modern way and everything was super yummy. Also, for someone just arriving in Morocco it would be an ace dish to have as a starting point to taste all the mezze dishes and get to know some Moroccan flavours. 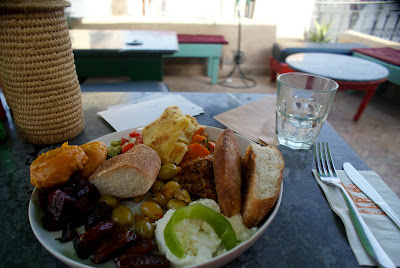 We loved the food at Café Clock and were feeling fit to burst after chowing down on every last drop of our massive portions. 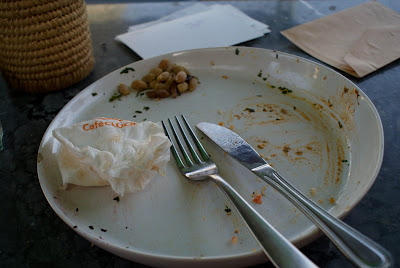 We had a lovely rest on the terrace to write some postcards before setting off back out into the bustling streets. 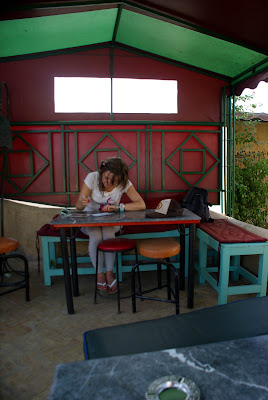 Our dinner wasn't too expensive - our meal and drinks cost 180 Dirhams which is about £15. Much better and for cheaper than a meal at an English eatery of a similar ilk. 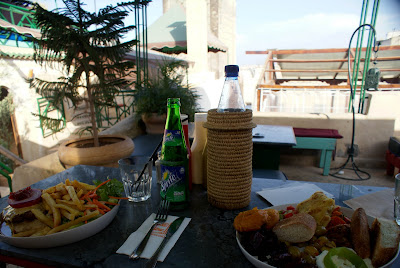 I would recommend Café Clock to anyone holidaying in Fes for somewhere a little bit different. We were later told by one of the locals that the place is actually owned by an Aussie so you do feel a bit like you're not really enjoying the true Moroccan experience. However it does seem as if the owners aims are to share their knowledge of cookery traditions with people in a tourist-friendly way: they offer Moroccan cookery courses and have a book available on Amazon about modern Moroccan cookery in their kitchen. A very exciting place!

Posted by Jules at 10:04 AM
Email ThisBlogThis!Share to TwitterShare to FacebookShare to Pinterest