The Wig and Pen

May bank holiday weekend saw us returning to Sheffield to celebrate the birthdays of Jules and Roy Morris, as we have said previously our experience of Sheffield has always been that the choice and quality has been limited (the high point being our recent visit to Wasabisabi) and so with this thought in our heads and a hangover in our brains we descended on The Wig & Pen (By The Milestone). 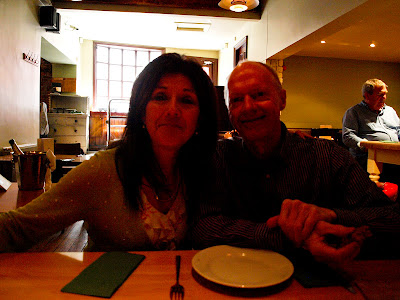 We had been before some years ago before it gained the "By the Milestone" portion of its title and eaten some alright, but overpriced, tapas in a dark corner of what was essentially a pub. I am happy to say that if nothing more The Milestone have made their mark on the decor and ambience of the place. I don't know how but they have filled the entire place with natural light, previously the bar had dominated but now it is clearly defined as a restaurant. A huge change! 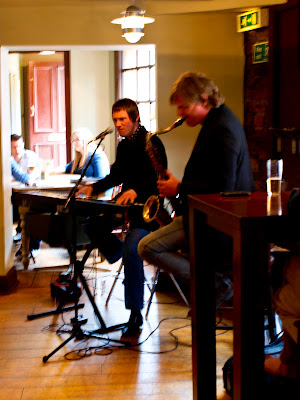 On walking through the door we were greeted not only by a warm welcome and an invite to grab a drink at the bar but also by a blast of live jazz belted out by a decidely northern jazz duo. Now I'm not normally in to this kind of lounge bar-esque addition to a dining experience but it really did fit in well with the Sunday afternoon vibe that was going on and while I enjoyed it while we were stood at the bar for five minutes it wasn't intrusive at all when we were seated at our table just round the corner. 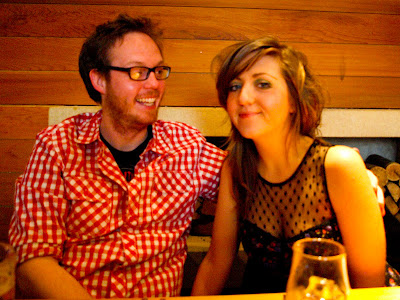 So far so good. Our initial contact with both of the waiters and the manager were brilliant, nobody seemed like they were in a rush but everything seemed to be in absolute control and the service was both super polite and friendly. At the same time they were extremely knowledgable about their food (a rare trait nowadays) and answered the dreaded question "what do you recommend?" (Jules' favourite question) with enthusiasm and confidence.

On to the food. Before we even get to the starters lets talk about the instant hangover cure that is their Bread and Olives. I don't think bread and olives get any better than this but I've never been to Italy so I will be happy to be proven wrong at some point in the future. Not being an olive fan I only tried one and I wasn't converted but everyone else loved them. Instead I took a giant chunk of butter and spread it on the white bread like it was going out of fashion. Who needs aspirin? 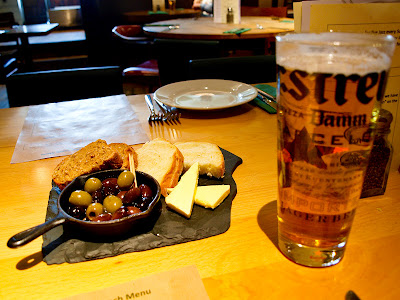 There was a clear split on the dishes ordered for starters. Jules went for the Truffled Caulifolower Velouté with Cauliflower Leaf Foam and everybody else went for the Wood Pigeon and Smoked Goats Cheese Pudding with Heritage Beetroot. Jules said her velouté tasted like the most lovely home made cauliflower cheese family recipe taken and condensed into a rich, smooth sauce. I couldn't agree more (I did try a bit) and on top of that the foam (normally a fairly pointless addition) gave an additional subtle hit of flavour. 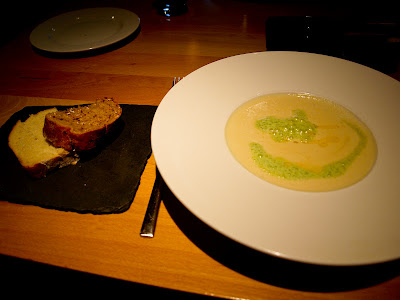 So the wood pigeon was popular and who could argue with a dish description like that, goats cheese and beetroot for me is a perfect combination but add to that a rich bird as well as pastry and we knew we would not be disappointed. We were not disappointed. 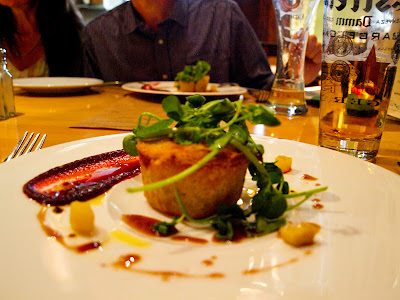 The pudding was absolutely amazing, stuffed with earthy pigeon with the odd chunk of goats cheese. On its own the thick pastry and rich meat would have been overpowering I think but with the generous stripe of beetroot across the plate you could always dip into another flavour when things got too much. If I had to pick fault with the dish I would say that I couldn't really tell that the goats cheese was smoked (I didn't care) and some people might find the pastry a little thick (I loved it, this was Sunday lunch remember). 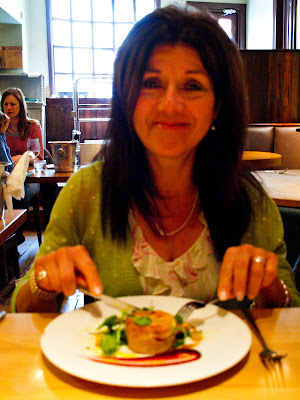 On to the main. Again another simple split with me going for the Roast Silverside of Beef with Herb Mash Potatoes, Yorkshire Pudding and Seasonal Vegetables while everyone else went for Pan Fried Bream served with Crayfish Crumble and Oxtail Canneloni (Jules swapped her oxtail for extra crayfish - another good suggestion from the waitress). 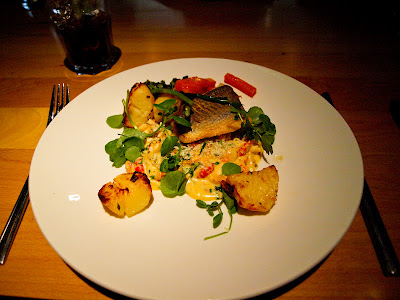 What did everyone have to say about the Bream? "Wow" I think was the main sentiment. Perfectly cooked bream with a whole host of different flavours coming from the side dishes and one of the most attractive plates of food I've ever seen up close. Even Roy, a gent who normally shys away from meat said that the oxtail canneloni was a sensation, I was seriously jealous that I didn't have one myself. 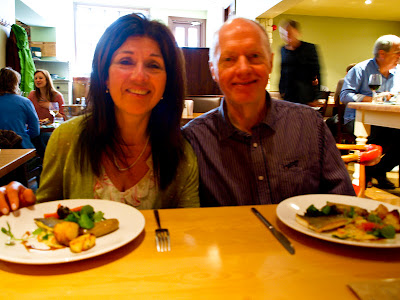 As it was Sunday I went for the roast beef. It was simple with not too many commponents, a generous slab of beef served rare, a gigantic yorkshire pudding and a portion of greens, mash and roasties. 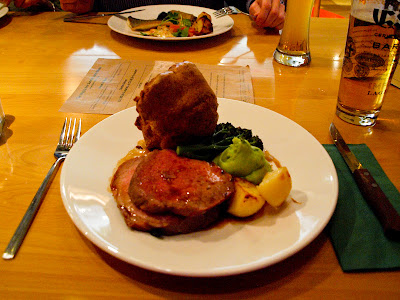 I won't say much about my main as there isn't much to say apart from that every mouthful was absolutely amazing. The beef was definitely the best I've ever tasted and although some people might not like their meat served so rare it was perfectly done for me. This wasn't a dainty plate of food either, it was filling and satisfying but that didn't stop it being a 'fine' plate of food either. 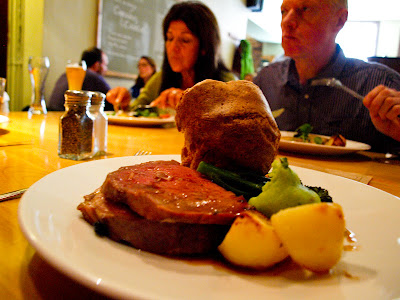 So what do you do when you've had two great courses of food? Well you don't want it to stop do you so you go for the third. Jules ordered a Chocolate Brownie with Honey Parfait, Cinder Toffee and Milk Purée, Roy went for the Passion Fruit Jelly with Mango Purée, Coconut Cream and Hazelnut Crumb while Aida went for the Lemon Possett with Cardamom Cream and Chocolate Sorbet. When they arrived there was swap between Aida and Roy as Aida wanted something a little lighter and smaller than the lemon possett and Roy couldn't take his eyes off Aida's possett... 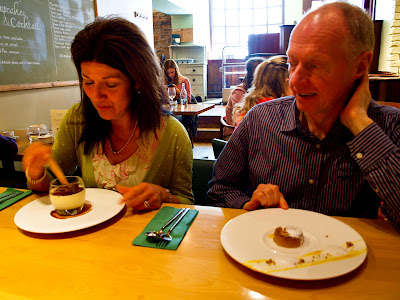 I couldn't really comment on everybody else's desserts but they looked brilliant, there were lots of oohs and aaaahs coming from Jules (she loved the lavender surprise in her milk purée) and Roy as they tucked in to their treats. 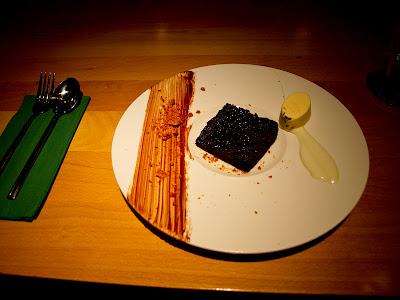 Unfortunately it sounded like there wasn't a lot going on with the passion fruit jelly. 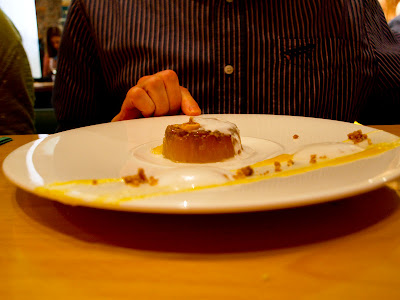 For me I went for the Wig and Pen Cheese Board and really what could go wrong with a cheese board? Nothing is the answer but this one really went above and beyond your average cheese board arriving with homemade cheese biscuits (I could have eaten about twenty of these), pickled onions, two different chutneys and the fresh bread that accompanied the olives previously. 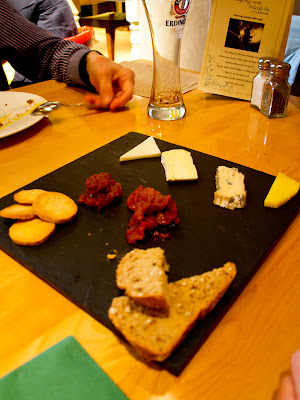 So what more can I say about The Wig & Pen? The restaurant itself is lovely with a perfect Sunday afternoon ambience and the food was almost faultless from beginning to end. The service? Perfect from beginning to end, one thing that I forgot to mention was that just before our starters arrived the manager popped over to apologise that the starters were late (we hadn't noticed, it had only been twenty minutes) and gave us a free round of drinks. If nothing else this shows that the restaurant has it's priorities straight and really wants to build some good spirit with every single guest that walks through the door. Another aspect that I haven't discussed yet is the price, get ready for this, the three course meal was £13.95 per person! I have paid more than that for average main courses in lacklustre restaurants! 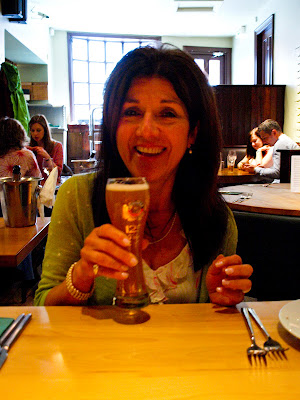 Did I enjoy every mouth full of food? Yes. Will I be going back next time I am in Sheffield? Yes. Would I reccomend it to everybody I know that owns tastebuds? Yes. Was it the best meal I have ever eaten? Probably. 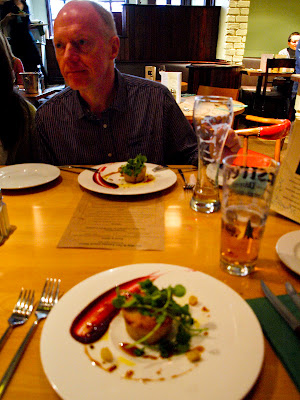 Posted by Bailey at 8:36 PM
Email ThisBlogThis!Share to TwitterShare to FacebookShare to Pinterest