Although we live in Manchester now that was not always the case, both myself and Jules originally hail from Sheffield (almost Sheffield in my case). Now I don't think Sheffield has a great reputation for good food and looking back on our time living there the average restaurant quality is quite low but there are some absolutely outstanding eateries and one that had been recommended to us for years was Wasabisabi. A weekend back in Sheffield a couple of weeks ago gave us our opportunity to visit and we grabbed it with both hands. 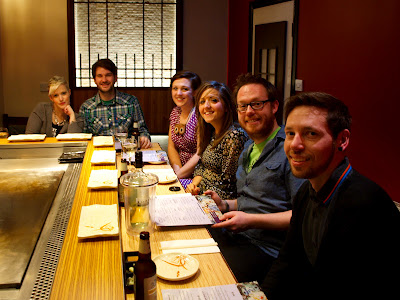 Before I start with the main body of this review I will apologise that it is going to be on the light side when it comes to text but to make up for it there are going to be a lot more pictures than normal.

There are two dining options at Wasabisabi, you can either sit in the main restaurant and order from an extensive a la carte menu or you can visit the teppanyaki room to experience having your own personal chef perparing a set menu right in front of you. Guess which one we went for? 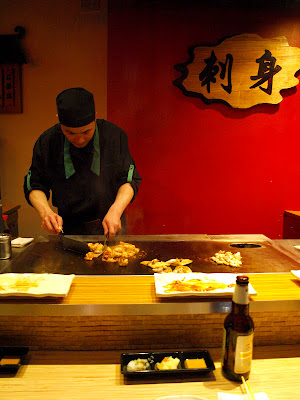 That's right we went for the tepanyaki room! On arrival we were quickly seen to with only a brief moment at the bar to get our drinks order in before we were whisked to our own private tepanyaki bar at one end of the tepenyaki room. So for starters the staff were great from the moment we arrived to the second we walked out of the door, always polite and attentive. If you are after chatty waiting staff you will be disappointed as they are definitely on the efficient end of the service scale rather than the overbearing end but I thought they were spot on. 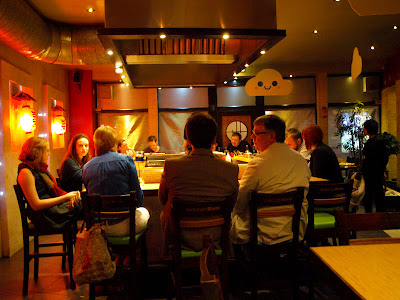 The restaurant itself is decked out really nice, the main restaurant is bright, clean, airy and manages to be modern but doesn't sacrifice any part of the strong Oriental theme. The tepanyaki room on the other hand has a very different atmosphere, it is a little bit darker and the hot plates really dominate the room, more importantly the people occupying the room are not there for a quiet meal which means the air is definitely full of chatter and hollering. In a good way! 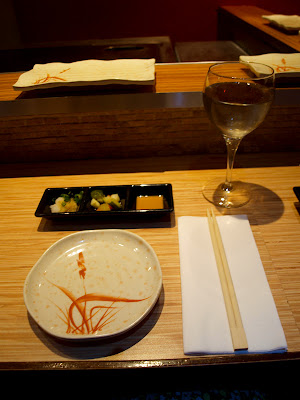 On to the food, so there are various set menus that you can choose to be cooked right in front of you that have various combinations of seafood, meat and there is also a completely vegetarian option but all of them start with the miso soup and salad which is there to be consumed while your chef gets his equipment in order, warms up and gets his greetings in (our chef was quite chatty throughout!) 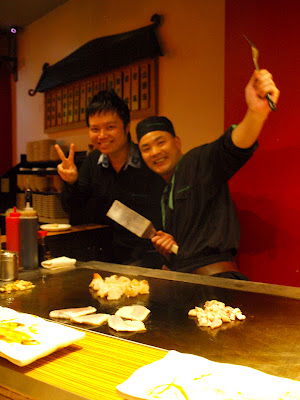 There wasn't anything spectacular about the first course but it was executed perfectly, the soup was steaming hot and very tasty while the salad was extra crunchy and fresh. It was a really good way to get your palate ready for the other courses. 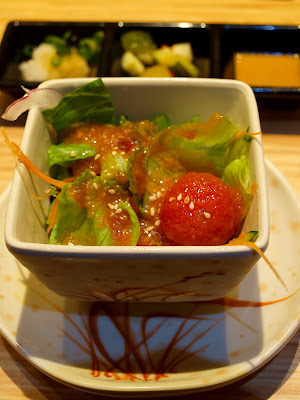 Before the next course arrived the chef gave us a quick lesson on how to create a fireball on a hot plate...

After we had finished recoiling in fear a plate of various ammunition for the hot plate arrived for the chef to begin preparing. 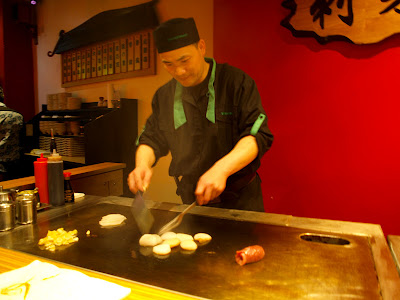 I had gone for the exclusively meat based option and so my first dish to be served was duck, there were no real sides with this apart from a small tray of pickles, ginger etc. but it really didn't matter as the meat was so fresh and tasty that it was a taste sensation on it's own. 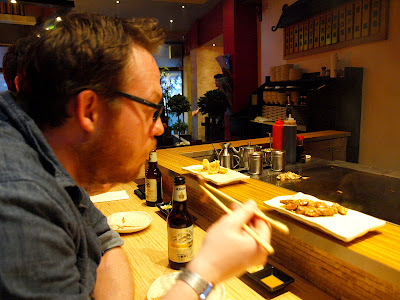 Everybody else went for the scallops option for the first course and I have to say, despite not being a scallop fan, they looked and smelled amazing. There were a few shout outs of best scallops ever if I remember rightly and Jules hasn't stop banging on about it since. 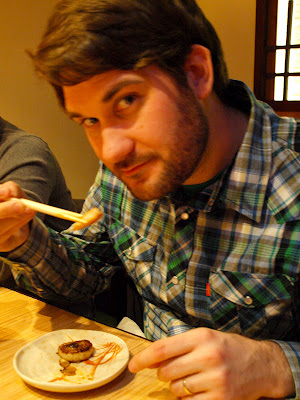 While the first round was being chewed the second round of treats had already hit the hot plates arriving moments later. Again while I had the chicken everybody else was receiving gargantuan king prawns and sea bass that looked absolutely amazing. 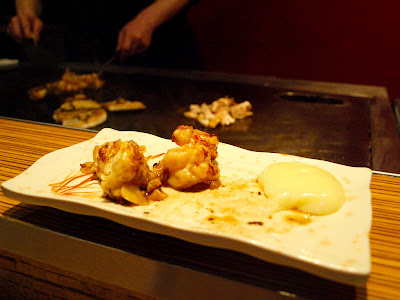 The chicken was perfectly cooked and still sizzling when it hit my plate, this time we had the option of a Japanese style mayonaise to go with our food which was really rich but didn't take away from the main flavours of dish. 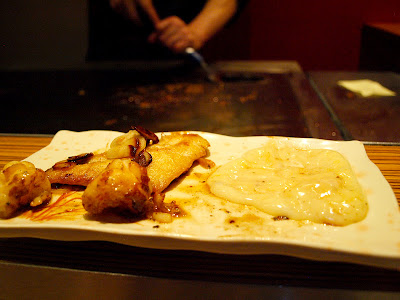 Before the final savoury course arrived the chef prepared a giant omelette which was not to be delivered to our plates in the normal manner...

This is really what the tepanyaki demonstrations are famous for and although one or two omelette chunks did go astray it was still a lot of fun, probably more fun to watch than to participate! 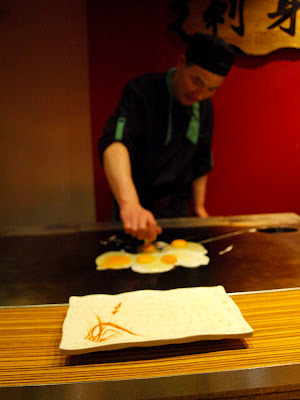 The entertainment wasn't quite over as the egg fried rice was transformed in to a beating heart... 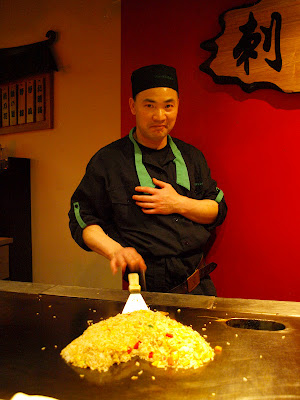 The 'lols' and 'wows' out of the way the final course arrived, for me a rare slice of steak (and when I say rare I mean it was RARE) and everybody else got a good slab of salmon. 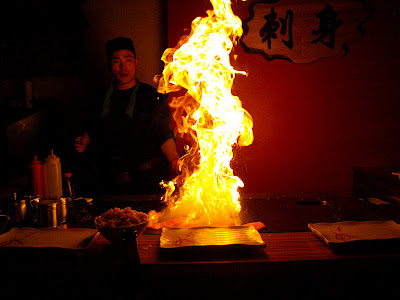 Much like the other items served straight from the hot plate it was very very simple but still brilliant just because it was so so fresh. 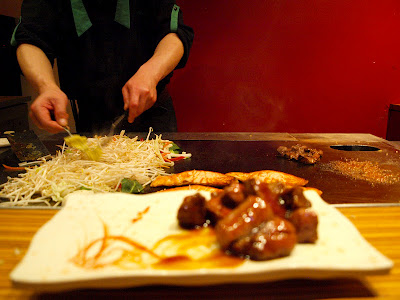 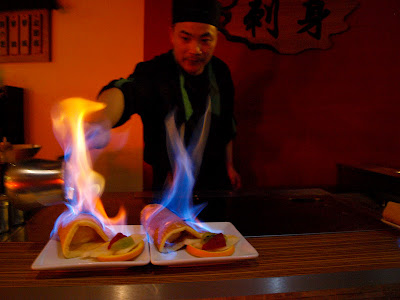 Nice simple food which was tasty, my only regret being that I lost the flavour of the amazing steak that I had just enjoyed. To close out the meal green tea and coffee was served, I didn't go for it myself as I was still enjoying a bottle of one of my favourite beers Kirin which is a pretty dry lager which goes well with most Japanese food. 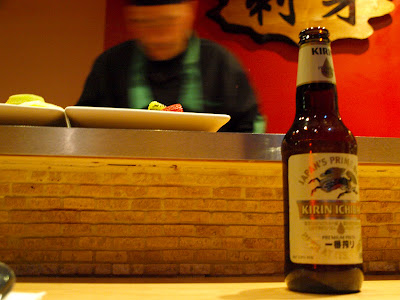 It really was a great meal and we all loved the experience of the tepanyaki bar, I've never tasted food so fresh and simple that still hit the spot. 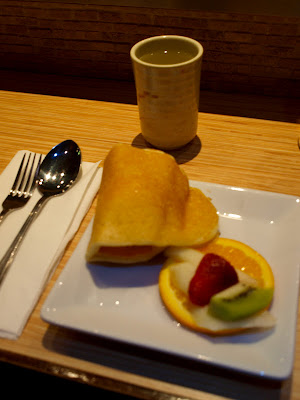 The service was impeccable and the restaurant was high class from top to bottom with a great atmosphere. That said next time I go back (and I WILL be going back) I don't think I'd go back for the tepanyaki room, instead I'll be going to sit in the normal restaurant to pick some more exotic and interesting foods from the a la carte menu. 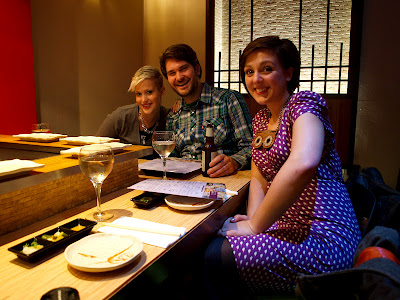 One other warning is that the tepanyaki bar set menus are not cheap but saying that I left very full and we were there for over 2 hours having a great time so I didn't feel hard done by at all. I would recommend Wasabisabi to anyone, especially those of you (like me!) that think of Sheffield as a culinary wasteland. 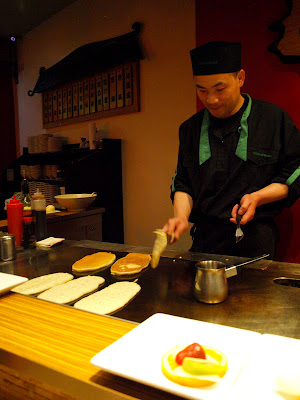 Posted by Bailey at 8:15 PM
Email ThisBlogThis!Share to TwitterShare to FacebookShare to Pinterest