We have a 'To Visit' restaurant list as long as my arm and we never seem to tick any of them off. This displeases me. One that has been on there for ages is Damson Restaurant in Heaton Moor - it first grabbed our attention when it was nominated for the 'Restaurant of the Year' award in the 2011 Manchester Food and Drink Festival awards a whole year ago. Far too long to wait if you ask me.

So this weekend when some of our previous plans fell through we thought we definitely deserved a treat so decided to hit Damson for their early bird menu of 3 courses for £17.95. As this bargainous menu is only served between 5:30 and 6:30pm on Fridays, I had to get changed in about two seconds flat as soon as I got back from work and do my make up in the car but it was all part of the fun. 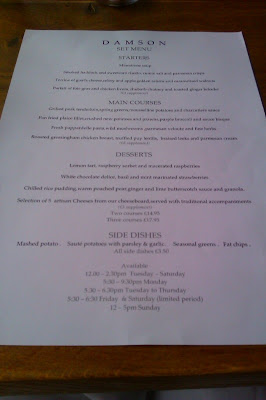 I guess one of the downsides of going for early bird menus is the risk that it is going to be dead quiet and this was the case for us. Unfortunately at Damson the setup is a bit weird in that the waiting station is bang in the middle of the dining room so it felt like it was just us with a load of staff standing around us doing nothing which kind of stopped me from relaxing a little bit which was a shame. As the restaurant filled up a later, it did get better although a lot of the customers were the type of people who wore tweed jackets and made a load of posh sounding racket. Not the most pleasant environs for the likes of us who are accustomed to more relaxing dining atmospheres.

I have to say we did have super high expectations due to the whole award thing and we were obviously going to be comparing it to the most recent ace meal we went for at The Wig and Pen. Things started off well with a slate of cute mini loaves and butter topped with little bits of rock salt and herbs being brought over to our table. The bread was really lovely - my granary one was crusty and chewy (but in a good way), the salty herby bits were a real treat, and to quote Bailey "the butter was amaaazing". 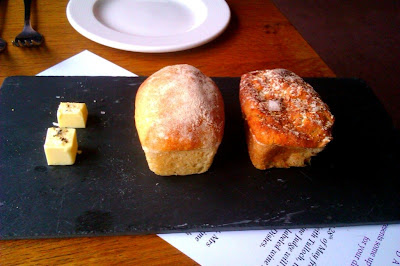 So, onto our starters. I went for the Smoked Haddock and Sweetcorn Risotto with Cumin Salt and Parmesan Crisps. This sounded right up my street and it was - creamy, perfectly cooked risotto with juicy bits of sweetcorn that popped unexpectedly in my mouth and the crunchy, cheesy parmesan crisps were awesome. Although there were quite a few chunks of soft haddock, I didn't really taste it that much, maybe because it was competing with quite a few strong flavours but it was a really lovely dish. 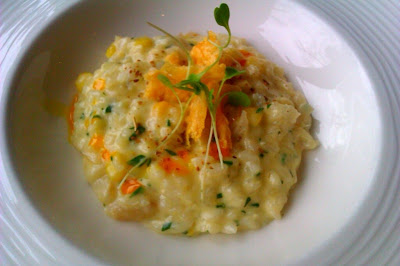 Usually whenever we go for a meal, I take great pleasure in showing Bailey exactly how well I know him by predicting (normally correctly) what he is going to order. But with the Damson set menu I really didn't know as there didn't seem to be many options that he'd like. He ordered the Minestrone Soup (I thought he was going to go for the foie gras) which sadly he didn't really like! Apparently the broth was quite bland and the veggies didn't taste of much, plus he hates peas. Poor Bailey. I had a taste of the soup and it really reminded me of these paprika flavoured crisps I always used to buy in Peru! Strange. 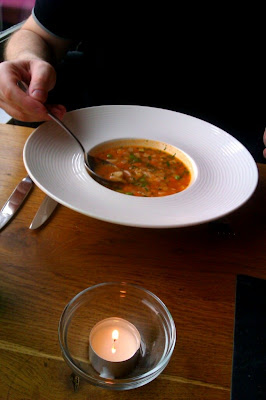 Hopefully he would be happier with his main. Mine was the Pan Fried Plaice Fillet, Crushed New Potatoes and Prawns, Purple Broccoli and Sauce Bisque. This arrived looking as pretty as a picture. Everything was nicely cooked - especially the plaice which was flaky, tender and crispy on the outside. I liked the potatoes which were still a bit chunky and with skin in as well as little prawns hidden inside. However, although it was all really nice, it was maybe a bit under-seasoned and wasn't quite the flavour sensation I was hoping for, especially when comparing it to my Wig and Pen fish experience! 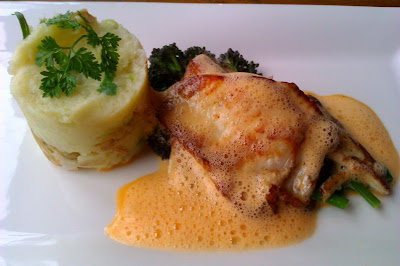 Bailey enjoyed his main of Grilled Pork Tenderloin, Spring Greens, Mousseline Potatoes, and Charcuterie Sauce. He said the pork was beautifully cooked and soft  - probably one of the the best porks he'd ever had, and the potatoes were super smooth and buttery. Like mine though, he felt like there could have been a little something else on the plate to liven it up a bit. 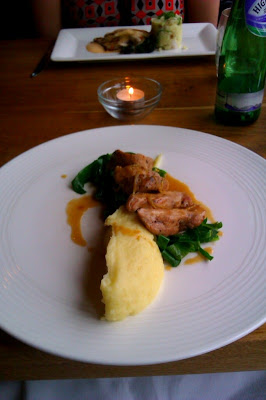 I had a feeling Damson was going to be good at desserts and I was very happy to be proven right. I simply couldn't have gone home without tasting with Lemon Tart with Raspberry Sorbet and Macerated Raspberries. This was an incredible dessert - great pastry topped with a rich lemon curd type filling with a crunchy sugar topping. The raspberry sorbet was so thick and smooth that it was almost more like an ice cream and I loved the juicy macerated raspberries as well as the little bits of dried raspberries (to quote myself "it's like what you get on Special K Red Berries"). I could have eaten two of these desserts. Really. 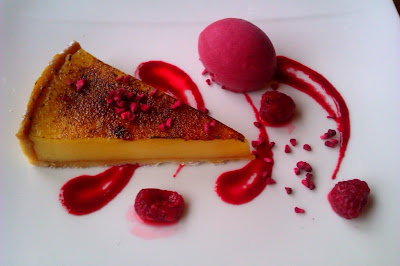 Bailey, I think, in another attempt to recreate his Wig and Pen experience, ordered the Selection of 5 Artisan Cheeses. I immediately started marveling over the cute chutney jar and the thinnest bread slicing I have ever seen. Bailey tucked straight in and I enjoyed watching his variety of facial expressions as he ate mega flavoursome cheese after mega flavoursome cheese. He very kindly kept me some little pieces behind and I enjoyed them a lot but Bailey was critical once again - saying the cheeses were all too strong and that he would have preferred a few milder ones to balance it out a bit. He was also unimpressed by the thinness of the bread which wasn't enough for the cheese that was there and would have preferred some crunchy crackers. 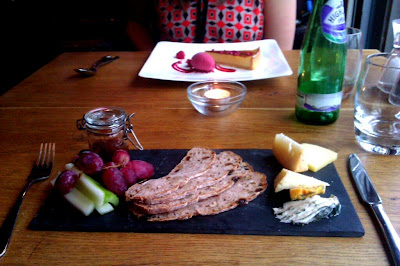 So we left having had a fairly nice time, especially for the price, but not really blown away. I think what with Bailey not being too fussed, some of the food not being that ace and the atmosphere in the restaurant which was stuffy and cold all at once, I have to say we were generally a little bit disappointed.

I do hate being disappointed by meals out and I think on any other occasion I would have been happy enough with that meal that I ate but I think it was the fact that our expectations were so high. As you can imagine after waiting a year to go there, I was really excited about trying out Damson and maybe I built it up to be something it wasn't. Adding to the fact it felt like it wasn't really "our scene", I'm not sure if we'd go again. Sorry... 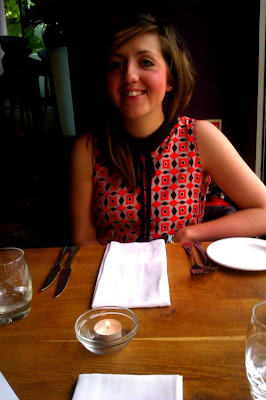 Posted by Jules at 8:04 AM
Email ThisBlogThis!Share to TwitterShare to FacebookShare to Pinterest