Every time I've asked local folk where the best breakfast in Manchester is, someone always mentions The Lead Station, followed by "try the Eggs Benedict". We've been in before for a drink and the food has always looked and smelled great. Plus one time we saw a real life celeb on the terrace at the front. Must be good. 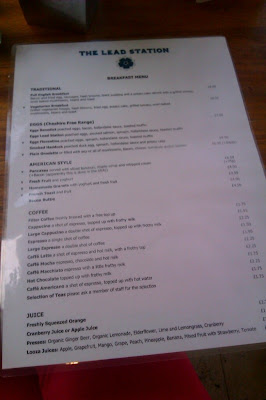 Well our time finally came on my birthday when Bailey told me he wanted to take me out for a slap up petit déj., and asked where I wanted to go. It was really difficult to choose between Thyme Out Deli, which I will surely visit very soon, and the Lead Station. In the end we went for the latter as I love Chorlton so it made sense. We arrived very early and as it was my birthday I was feeling very smug as this picture shows... 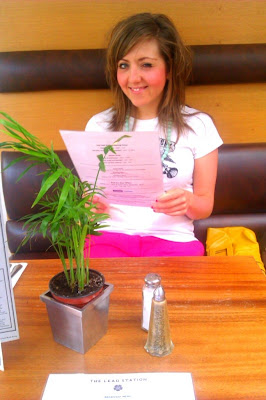 First port of call was a good coffee and both Bailey and I ordered cappuccinos. A great cappuccino it was too - loads of thick frothy milk and the most ace little shortbread biscuit which was so buttery Bailey almost had to spit it out. In a good way. 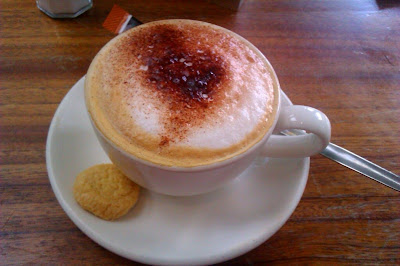 Although I had been recommended the Eggs Benedict so many times, I decided to rebel and ordered the Smoked Haddock which came with a poached duck egg, spinach, hollandaise sauce and a potato cake - a much better deal as if you ask me, potato cake > toasted muffin. 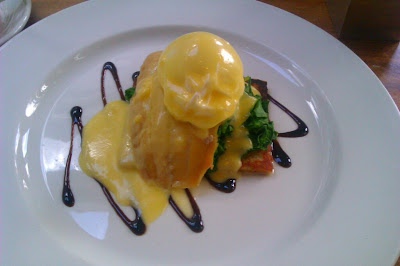 I was not wrong - my breakfast arrived looking and tasting absolutely splendid. The hollandaise was rich, the potato cake soft and buttery, the spinach lovely and fresh, the haddock tender and tasty and whatever that glaze on the plate was, it complimented it all perfectly. The duck egg was really well cooked too - the white was quite firm but the yolk was nice and runny. 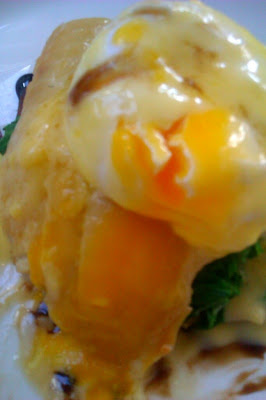 Bailey ordered the Full English Breakfast which consisted of egg, bacon, sausage, hash browns, black pudding, tomatoes, beans, mushrooms and toast. A well piled plate if I ever saw one. Bailey said everything was "spot on" - he loved the sausages in particular. He also mused "normally toast is just a tool to get to the other ingredients but that was a highlight". He didn't eat all of his black pudding, but that's because he doesn't really like black pudding. Don't think the hash browns were homemade though. 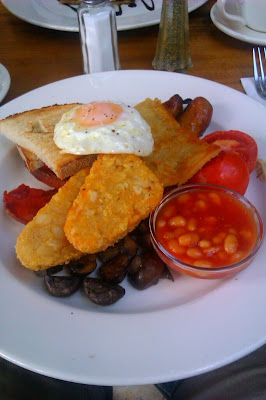 The service was pretty good, if a little rushed - I think maybe twice things were brought to us without the staff member saying a word then scurrying off. Still, it was all very efficient, in fact, it was all over a bit too quickly - we wolfed down our brekkies as we were dead hungry and as I was excited, I wasn't in the mood to sit and drink coffee and read the papers. This meant we were in and out in what felt like (and may well have been) half an hour! Good if you're in a rush. 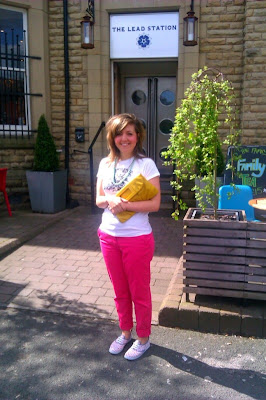 So impressed were we with our Lead Station brekkie that we left raving about the place to our chums and I also decided to go back there that evening after our meal at Yakisoba down the road. Unfortunately our return wasn't so successful - the staff were a bit rude to us and seemed annoyed that we had  arrived and ordered a drink when they were planning on an early night. I've worked as a barmaid in the past and I can imagine their hearts probably sank when they saw a party of 20 stroll in at ten past eleven BUT I think if your establishment is open for business it's your responsibility to give them the same good customer service you'd give anyone else. We ended up wondering why they'd taken our money if they didn't want us to be there! 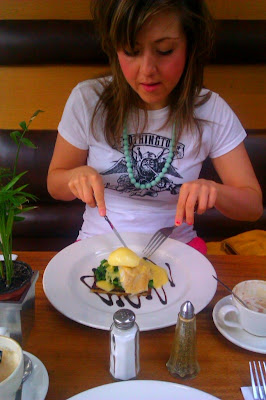 Anyway that doesn't take away from our experience in the morning and I'd have to say that you should definitely believe the hype about the Lead Station breakfasts - it was my favourite Manchester breakfast I've had yet!

Posted by Jules at 8:07 AM
Email ThisBlogThis!Share to TwitterShare to FacebookShare to Pinterest