We have been meaning to go to Dosa Xpress - Withington's premiere South Indian restaurant / café - for ages now. It was recommended to us some time ago by a couple of our friends who live nearby and named it one of the best Indian restaurants in Manchester. On one occasion we tried to go but somewhere on the walk from the carpark to the restaurant got distracted and ended up in the also excellent Kyotoya, which is on the same road. 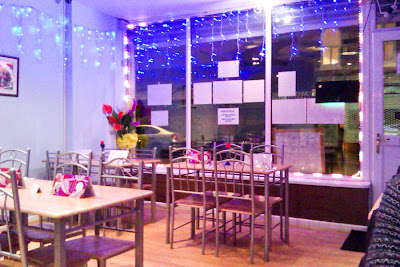 Recently our interest in visiting Dosa Xpress was rekindled. It all started with a trip to a Guerilla Eats late last year and a taste of Chaat Cart's delicious, crisp dosa. Then we started watching Madhur Jaffrey's Curry Nation - a charming show in which Madhur makes her way around the UK tasting everything from the best authentic food being served up in Indian restaurants to the mass-produced microwave curries you get in Wetherspoon's. Bailey and I were absolutely glued to the screen during the episode where Madhur explored South Indian cuisine and went around tasting South Indian street food including Idli and the Puri before cooking up some dosa in her own kitchen; I vowed to taste all of these things as soon as possible. As if all that wasn't reason enough to visit Dosa Xpress, the brilliant Manchester Foodies then mentioned it in their Top Ten Cheap Eats in Manchester.

So we managed to enlist our friends Tom and Heather to come with us on Saturday night. Bringing other people to Dosa Xpress felt like a bit of a risky business and we did have to forewarn them of the "no frills" nature of the place. When we arrived it was completely empty, the music was just that touch too loud and the bright blue fairy lights were a little bit intense. 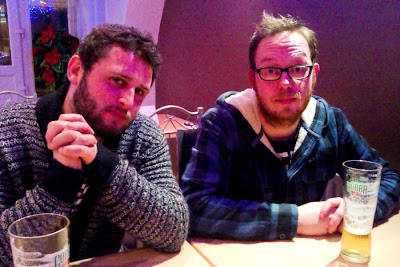 However, we were soon put at ease by our waiter (who was either a massive boozehound or just thought we looked like massive boozehounds) when he made us laugh by recoiling in shock and saying "No beer? No wine?" every time anyone ordered a non-alcoholic beverage.

Looking at the extensive menu, I was really pleased that I'd had Madhur explaining what everything was on the telly and that I'd already tasted my first puri the evening before at The Hungry Gecko so could sort of pretend I knew what I was talking about.

We ordered a selection of starters between us and the four of us just dove in which was a top way of finding out what everything was. What was really great about all of these was their simplicity. None of the flavours were at all overpowering, everything tasted fresh and not heavy or oily. Every single one of the starters was nothing short of fantastic.

We had great fun making little holes in the top of our Panipuri and putting the filling and sauce inside. These were excellent - light, crispy and moreish. Bailey thought these weren't quite as good as Jackie's from the night before, while I liked these a little better as they were so crunchy and full of flavour. 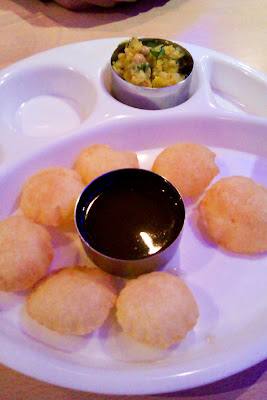 We were also huge fans of the Poori Masala which were stuffed so full of delicious potatoey, yogurty filling, that one of them exploded all over Heather. Unfortunately this is the price to pay for the pleasure of a delicious South Indian street snack. 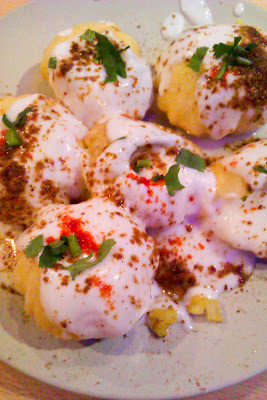 The Medhu Vada, described by the menu as an "urid dal savoury doughnut" sounded incredible. Anything resembling any kind of donut is OK by me. As soon got over the confusion of tasting something that looked like a donut and was the same texture of a donut but did not taste like a donut we started to really enjoy this. The accompanying sambar and coconut, coriander and tomato chutnies were all an absolute triumph. 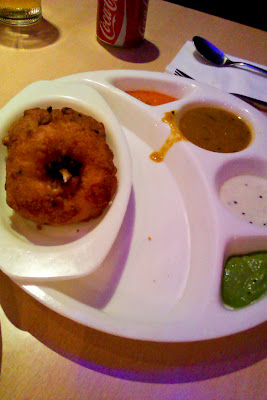 The Idli, which I had been most excited to try following Madhur's show, did not disappoint. Not only were these sticky, warm, delicious rice cakes a real treat, they were the best vessels for mopping up the amazing sambar and chutnies. This is brilliant as those chutnies are what dreams are made of. Looking back I don't know why we didn't get another few rounds of these as they must be healthy, they're only made of RICE for goodness sake. 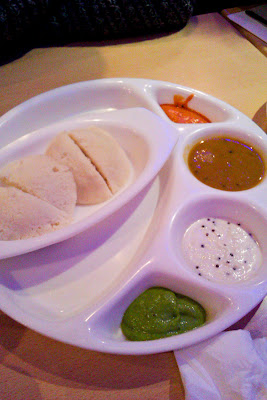 Onto the mains and Bailey and I had both decided to go for a dosa each. I ordered the Masala Dosa - a "fermented ground rice and ground urid dal" crepe filled with Potato Masala and served with more of the dreamy chutnies. I suspect this may have been the bog standard filling for a dosa as it was what Chaat Cart were making on their stall and was what Madhur also whipped up. I thought this would be a good introduction to the world of dosas and will try something a bit more adventurous next time. Paneer Masala Dosa sounds unbelievable. This was awesome anyway. The dosa was so thin and crisp, quite salty but not too much and surprisingly filling. Writing about it now is making my mouth water as it was one of the best things I've eaten in ages. 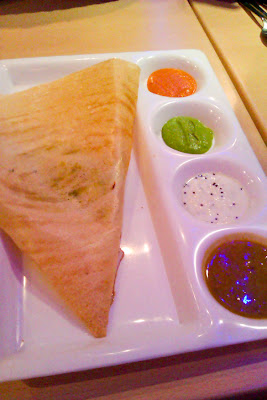 Bailey hasn't stopped talking about his Mutton Masala Dosa since he devoured it. At first he wasn't sure how to tackle it and found himself breaking bits off dry dosa to dip in the sauce until he got to the filling. And what a filling it was - the tender mutton had been so perfectly cooked that it had broken down to create a rich, thick gravy-like sauce. Again, this is one of the best things Bailey has eaten in years. 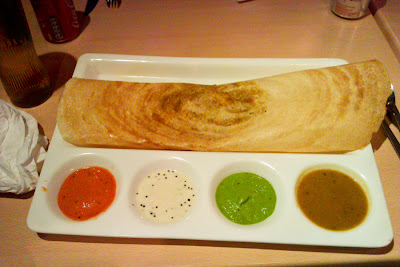 Tom and Heather both opted for meaty curries. Despite getting quite a bit of 'dosa envy', I think these were a really good choice as, being of the South Indian variety they were completely different to any of the curries we're used to eating and much like the rest of the food at Dosa Xpress were lightly spiced and subtle but with a rich sauce. They had these with Coconut Rice which Tom described as "the best rice" he had EVER had! 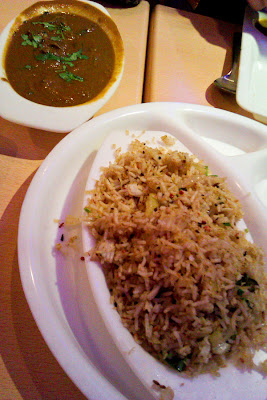 Finally, we felt it a crying shame to let any drops of the amazing sauces, sambars or chutnies go to waste so we ordered a couple of Chapati to mop them up. These were warm and fluffy as opposed to the rubbish, papery thin, dry ones you might get in inferior Indian restaurants. 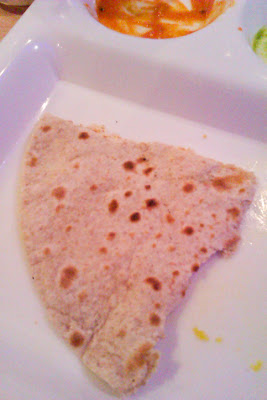 To say we enjoyed the food at Dosa Xpress would be a massive understatement. It was fantastic and a new flavour sensation for us. Eating in at Dosa Xpress is quite the experience, the staff obviously enjoy having a bit of banter with the punters (we were very amused when the waiter brought us the bill before we'd even asked for it and said "Time to paaayyyy! Hahahaha") but they are super nice (they chased us down the road just to tell us that Heather had left her kirby grip). It is also an experience that will not break the bank - this is one of the best value meals I think we have ever had in the UK with four starters, chutnies, two dosas, two curries, rice, chapatis, four pints and four cans of pop setting us back a mere £40! Dosa Xpress do also offer a delivery service but unless there are a few of you, you may struggle to rack up the minimum cost of £20. 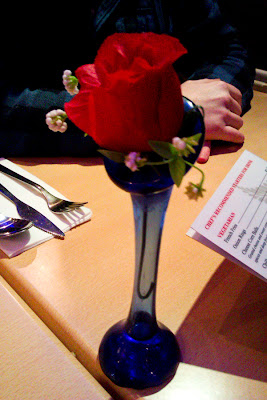 Posted by Jules at 8:19 PM
Email ThisBlogThis!Share to TwitterShare to FacebookShare to Pinterest