Sometimes it is pretty hard to come up with inspiration as to what to cook for friends and so I'm always glad when we have a theme suggested or forced upon us. This is what happens on a monthly basis when we get together with buddies for a film night, we all decide what double bill of movies we are going to watch and then that informs the food options! This month was Murrayfest and the main film was The Life Aquatic and so we had to go with seafood. As film night does not call for classy food (its basically an excuse to eat trashy food) we went for the English classic chippy tea - Fish and chips served with mushy peas, tartare sauce and fresh white bread for butties! 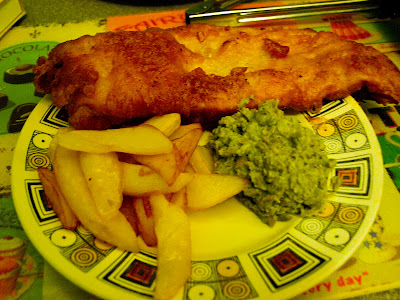 I had never made fish and chips before, I have fried chips before and I've made home made fish fingers but they weren't amazing. I was determined that this would be spot on. The only way to make sure it was cracking was to make sure we started with the right ingredients. Our first job was to nip down to our favourite fishmongers Out Of The Blue in Chorlton who, despite being in the midst of a mackerel holding world record attempt, sorted us out with some MASSIVE lovely fresh fillets of haddock which were expertly pin boned, nobody found a single bone! 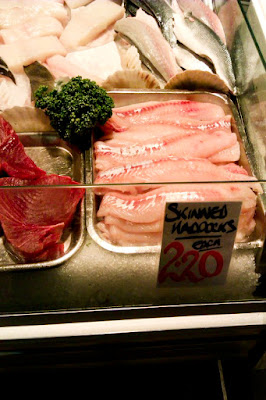 Now not everybody was a fish eater so for those peeps we got some halloumi. If you have never tried battered halloumi as a fish replacement you really are missing a trick, I was converted when we went to Bistro 1847, I can't quite put my finger on it but it's just so satisfying and 'meaty' despite the fact it isn't meat! 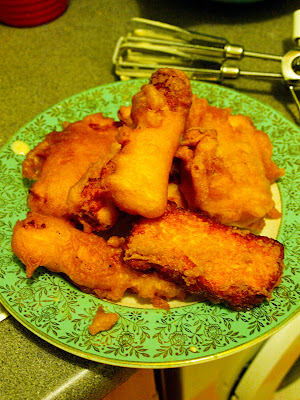 Looking back I think I under estimated the prep work involved. Par boil some potatoes, whip up a batter and Jules was taking care of the mushy peas and the tartare sauce, it didn't sound like much did it? But stick on top of that frying 4 lots of chips, 2 blocks of halloumi and 7 fish and it quickly became a big job. Because I was faffing around the house all day I didn't start cooking until almost 6pm and people were arriving at 7pm-ish expecting to eat at 8pm. Because I was a dunce the dinner was, unsurprisingly, pretty late. It ended up being A LOT of work and I really would think twice about doing fish and chips again for so many people. 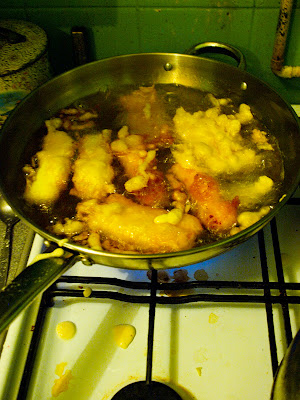 The one thing I did time right was the bread, we used Marcus' Overnight Spongebread recipe and so just had to stick it in the oven during the afternoon. We had used the dough recipe to make pizza bases recently and got our best ever results and a pretty good loaf at the same time but this time I had a bit more patience and left the loaves in a little longer and they came out absolutely perfect. Lovely crisp crust on top, chewy base on the bottom and cooked consistently all the way through the middle. We have pledged to make the dough prep part of a Friday night ritual so we can bake it every Saturday and I would reccommend you do the same! 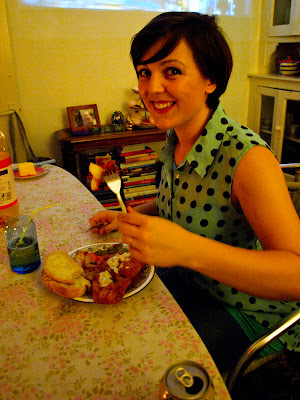 Jules did a great job with the tartare sauce and mushy peas as well. They were both really simple recipes that complimented the deep fried fish and chips with their lemon and mint flavours cutting through respectively. 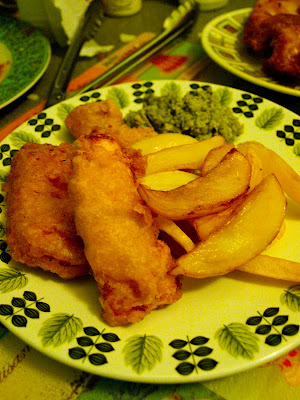 So how did the fish and chips turn out? Firstly I had a bit of a battle with the batter. The recipe I used as a basis used a big bottle of beer (I went for a cheap, strong, flavoursome, European fizzy lager) which was so thick that it killed our hand operated mechanical whisk, it snapped after just a few seconds of whisking action. I had to add another small bottle and a half of beer to the mix to get it back to being a liquid. The first thing to go in the fryer was the chips, the first lot went in with a dramatic spitting and fizzling. I must tell you that I was absolutely petrified of burning the house down with a chip pan fire so had left the back door slightly ajar so I could escape in to the garden should the worst happen. I got a great colour on these chips and dropped them in to a big oven tray to keep warm. The problem I encountered was that althgouh this first lot looked great I couldn't get the same colour out of the other batches, my oil temperature must have gone down so that even though they were on for a little longer than the others they still looked a bit pastey. Luckily it didn't seem to affect the taste of them! They came out pretty good but probably did suffer from being held in the oven while we waited for everything else to fry. 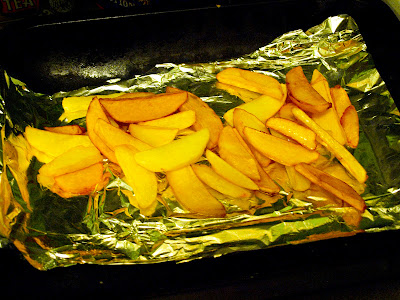 My batter was still immensely thick when I started to batter the halloumi and so as you can see from the pictures they came out with super thick batter. Nobody complained about this but I still thinned the batter out with a bit more beer before starting the fish. I was really happy with how the fish turned out. Almost as soon as they hit the pan they turned a lovely dark colour and the batter was the right consistency that they went really crispy and were evenly battered. Again the only problem with the fish was to do with my timing. Because I was late I was rushing them out instead of letting them rest for a minute to allow some of the fat to drain off. As a result they were a little on the greasy side for me but I will know for next time. 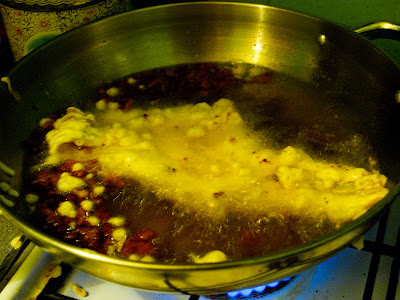 So in summary I was really happy with how it all turned out. Although the fish and chips weren't perfect I did learn some lessons so I know I'll get them right next time and with Jules' help in serving up perfect accompaniements for them we ended up with some happy diners. Will I ever cook fish and chips for 9 people again? Nope, too much hard work. Will I ever work in a chip shop? Nope, definitely too much work, they derserve a medal! Will I ever make fish and chips again? Definitely.

For the Tartare Sauce:
35g Capers
The juice of a Lemon
3 tbsp curly parsley
300g Greek yogurt
Salt and pepper 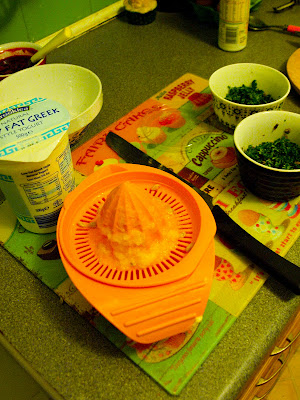 Finely chop the capers and parsley. Add them to a bowl or ramekins. Add the yogurt and lemon juice and season to taste. Keep refrigerated and serve with the chippy tea. 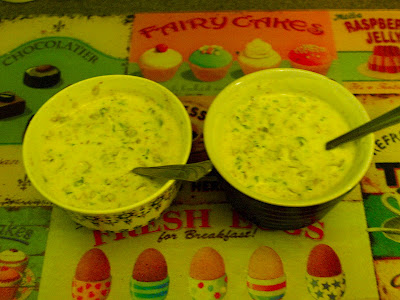 For the Mushy Peas:
500g frozen peas
3 tbsp mint sauce
The juice of a lemon
Salt and pepper

Add the peas to the pan with the mint and lemon. Cook until the peas are soft before seasoning and roughly blending with a hand blender. Keep the peas warm until the rest of the meal is ready. 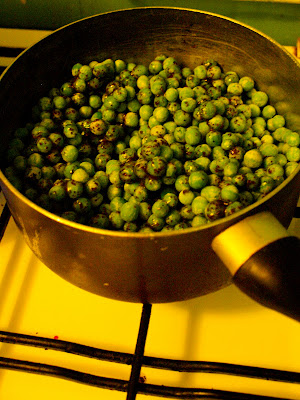 Cut the potatoes into chip shapes. 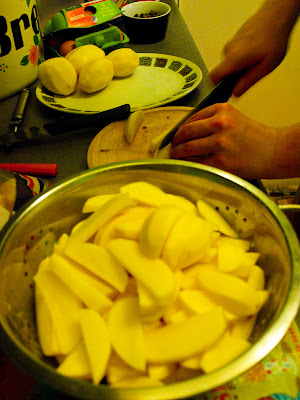 Parboil the chips for 5 minutes before patting dry with kitchen paper. Heat up the oil in a fryer or large wok. Cook the chips in the oil until crispy. Keep the oil in the pan for frying the fish and keep the chips warm in the meantime. 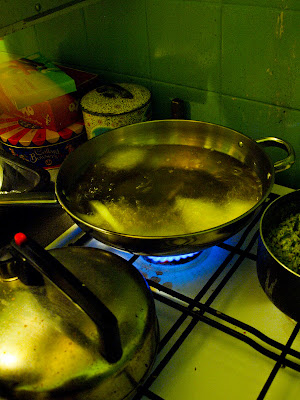 For the Fish
Skinned and boned haddock fillets or sliced halloumi
225g flour, plus extra for dusting
500ml pint good cold beer (play this by ear, just keep adding it until you are happy with the consistency, and make sure the beer is as fizzy and cold as possible)
3 heaped teaspoons baking powder
Salt and pepper

Mix up the batter in a large bowl and whisk well. Season the fillets and dip into the batter before adding to the pan of oil. Cook each fillet for 4 minutes until crisp. 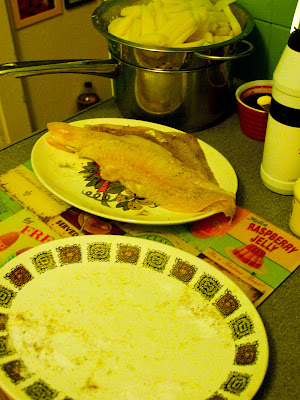 Put the fish and chips together on a plate and serve with Marcus' amazing bread. Enjoy with friends and a good showing of The Life Aquatic. 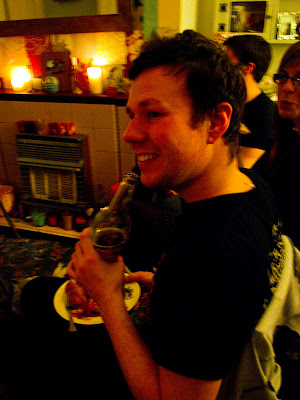 Posted by Bailey at 6:06 PM
Email ThisBlogThis!Share to TwitterShare to FacebookShare to Pinterest